In San Bernardino, volunteers scrambled to provide the mostly Guatemalan arrivals with the help and logistical support that Border Patrol did not. 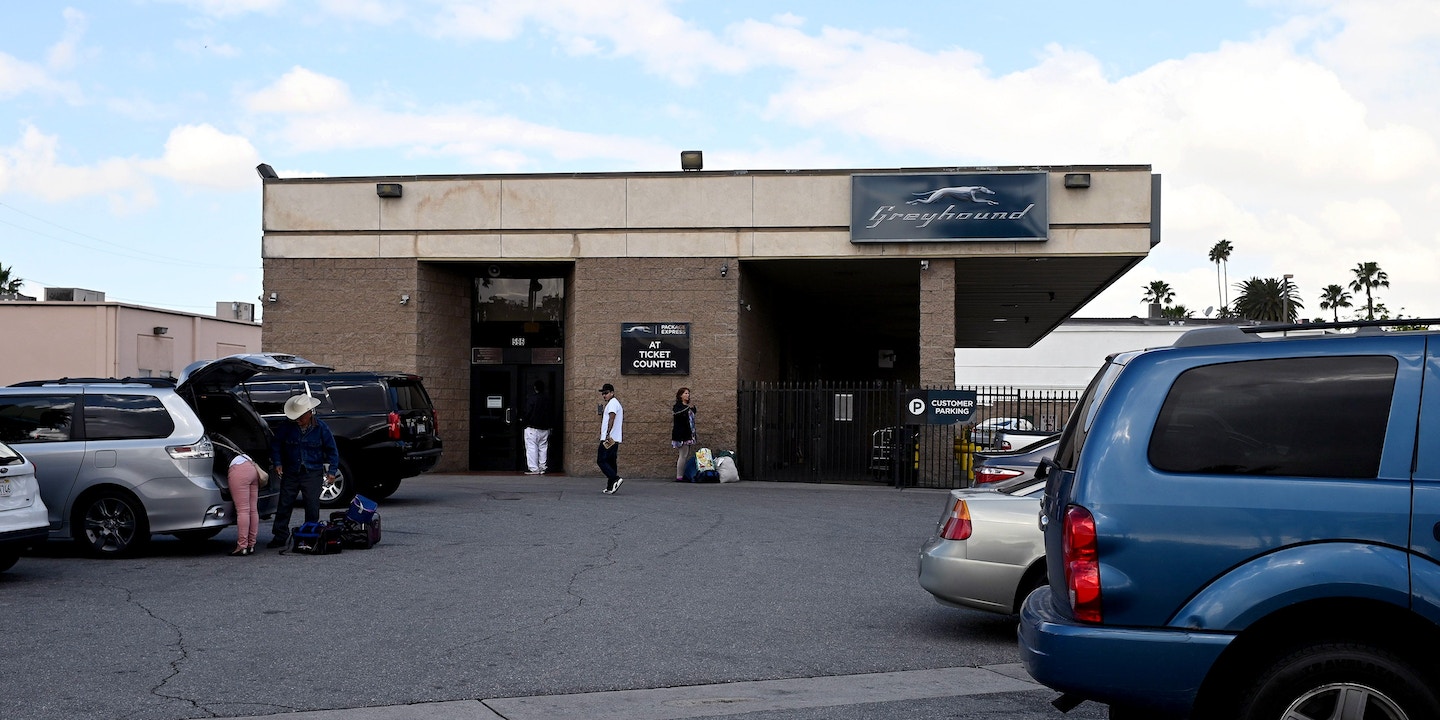 The vans started coming on May 14, depositing their passengers into an alley by the Greyhound station in San Bernardino, California, and then taking off. The first night, the station’s small lobby quickly filled with migrants from Guatemala and elsewhere who had been abruptly dropped off there by the U.S. Border Patrol.

The manager of the station ended up getting many of them tickets to Los Angeles that night, said Luis Suarez, of the Inland Coalition for Immigrant Justice. “It’s open 24/7, and he wanted them to have a warm place at least. San Bernardino closes at 2 a.m.” On summer nights, temperatures can drop 30 degrees in the city, which is located in the foothills of a mountain range about 60 miles east of Los Angeles.

In the following days, word spread among community groups that Border Patrol was leaving large numbers of migrants at the bus station several times a day without any orientation or assistance. “Our first day on the scene was that Thursday, May 16,” Suarez said. “By then, some of these folks had been sleeping out on the street overnight. We found maybe 35 people, extremely hungry, some of the kids were sick, people hadn’t showered since they’d crossed the border and been kept in hieleras” (the holding cells known in Spanish as “iceboxes” for their freezing air conditioning).

“Border Patrol was not providing medical attention” before dropping off the migrants, said Erika Paz, also with the coalition. “Everyone had a cold. … There was one youth who was seriously dehydrated, and our local doctors were able to bring him back to health.” In recent months, five Guatemalan children have died while in U.S. Customs and Border Protection, or CBP, custody or soon after being released, of flu or other ailments.

“Border Patrol was not providing medical attention. Everyone had a cold.”

In the two weeks since the drop-offs began in San Bernardino, the Inland Coalition, the Catholic Diocese of San Bernardino, and other community groups have organized a rapid response to welcome the new arrivals, providing them with the help and logistical support that Border Patrol did not.

“I mean, they are just abandoning them here,” said one Greyhound employee, who wouldn’t say more because they didn’t have permission to speak to the press (Greyhound would not make anyone in San Bernardino available for an interview).

The people arriving in San Bernardino crossed the border and were caught or surrendered to Border Patrol in the eastern part of California or southwestern Arizona, according to the Inland Coalition. People had also been dropped at the Border Patrol station in Indio, another hour inland in California, but when the Greyhound station there became overwhelmed with newly released migrants, Border Patrol started bringing them to San Bernardino. Shelters around Indio in the Coachella Valley had also reached capacity.

Border Patrol Agent Carlos Pitones said that the migrants had been processed in stations in the El Centro District, which covers California’s Imperial Valley, and that they were given packets containing information about their immigration court hearings. He said that “as of the last few days, we have been able to process families without having to release them. But the situation can change from one day to another depending on the apprehension volume either at our sector or our neighboring sectors.” He would not say how many people had been detained or released in total in the area in recent weeks.

The Greyhound station in San Bernardino is on a nondescript corner downtown, not far off the freeway. In a faded motel nearby, volunteers from groups around the LA area were sorting donations of clothes, food, and other supplies. After nearly two weeks, the volunteers had a rhythm: The drop-offs happened usually three times a day, with a little warning (CBP would call the diocese to tell them one was coming). Volunteers greeted the vans, offering water, food, clean clothing, and medical help for those who needed it. They helped them find their relatives, if the family had been separated at the border. Most of the new arrivals were taken to a local Catholic church, while some stayed in the motel near the station, where they waited for the bus or, in some cases, a plane ticket that would take them onward to meet relatives elsewhere in the United States.

The coalition developed an intake form to keep track of who was coming. As of Thursday, there had been just over 570 people, 261 families in total. About 90 percent of them are from Guatemala, according to Anthony Victoria, communications director for the Center for Community Action and Environmental Justice, part of the volunteer coalition. Guatemalan families are fleeing gang violence, drug trafficking, land dispossession, and corruption; women there face an epidemic of domestic abuse and femicide. Many Guatemalans are also leaving because amid climate change-induced drought and erratic weather patterns, they can no longer survive as farmers.

On Wednesday, a young woman and her father from Guatemala rested in a motel room. The young woman, who did not want her real name used, was 17 and spoke good Spanish; her father, a middle-aged farmer, said he mostly spoke Q’eqchi’, the Indigenous Mayan language common in the region of Petén. The two had crossed in San Luis Río Colorado, in the southwestern corner of Arizona, and were on their way to North Carolina where one of their cousins lived. The girl’s mother was back in Guatemala, and they still hadn’t spoken to her, but the cousin had been able to let her know they’d arrived.

Luis Salazar knocked on the door. He gave the pair a rundown of how their journey would go, marking on their bus tickets the three transfers they had to make: in Arizona, Texas, and finally Richmond, Virginia. He told them he’d find them a watch to carry or maybe a cellphone — neither of them had one — but reminded them that the time would change as they traveled east. Don’t put your travel papers under the bus with your bags, he said; immigration officials may stop the bus and ask for them. Eat the food in the bags we give you, your cash won’t go far for meals here. In Arizona, in Texas, you can probably find people who speak Spanish. In Virginia, I’m not so sure.

He told them, eat the food in the bags we give you, your cash won’t go far for meals here.

Immigration and Customs Enforcement, or ICE, is detaining a record number of immigrants as part of a crackdown in the interior and because of the Trump administration’s decision to hold many people who would once have been released pending their immigration proceedings. Most of the migrants that Border Patrol is now releasing to appear at a later court date are people traveling with minors or who have asylum claims (thanks to a longstanding settlement, children cannot be held in immigration detention for long) and they are relieved to be out of custody. The girl said she didn’t know if she could apply for asylum; she just said she’d had to get out. She wanted to work and study English. Border Patrol agents had never asked her if she was afraid to go back to Guatemala, she said.

“A lot of people were unclear whether they had a [‘credible fear’ interview],” which is the first step in the asylum process, said Suarez. “So do they even know they can apply for asylum? A lot of people that came in are from rural, Indigenous areas; they can’t read, they hardly speak Spanish, and they don’t fully understand the legal situation.”

Border Patrol and ICE have been releasing migrants in large numbers in the streets of cities along the border for months. Ahead of last fall’s midterm elections, some charities in Arizona suspected it was a tactic to rile up anti-immigrant voters. President Donald Trump threatened to drop migrants in cities that had declared themselves sanctuaries to prove a political point, but Department of Homeland Security officials have insisted that they are moving migrants around the country because they are at capacity at the border.

The number of people coming across the U.S.-Mexico border has increased drastically in recent months, and most of them are families from Central America hoping to apply for asylum. In April, the U.S. detained 109,144 migrants at the southwest border, the highest number since 2007. As Border Patrol stations fill up, the administration has forced some asylum-seekers to wait in Mexico, while local officials and charity groups in Arizona, New Mexico, and Texas are complaining about the agency’s response of dropping migrants with little planning or warning, sometimes in small towns with few resources to receive them. Some people are even being flown hundreds of miles away, like from Texas to San Diego.

Organizers in San Bernardino worry that the image of hundreds of migrants being dumped in cities far from the border will invite backlash. It was nearby Murrieta, California, where conservatives blocked buses filled with unaccompanied Central American children in 2014. When Border Patrol this spring began transferring some detainees from the border to a facility in Murrieta, conservative resident Bob Kowell, who also spoke out on Tucker Carlson’s show on Fox News, told a local news station, “We can be called racist and we’ll just smile. We don’t care,” adding, “We’re watching to see where and when they’ll move.”

But the volunteers in San Bernardino believe that things have changed for the better since 2014. The response from the community to the new arrivals has been overwhelmingly positive, with donations and volunteers flowing in.

“We believe the Inland Empire is changing from a very conservative place to becoming more welcoming of immigrants,” said Suarez.