In Guantánamo Case, U.S. Government Says It Can Indefinitely Detain Anyone — Even U.S. Citizens

The Supreme Court declined to hear the case of Moath al-Alwi, in which the government has made some eyebrow-raising claims about detention and rendition. 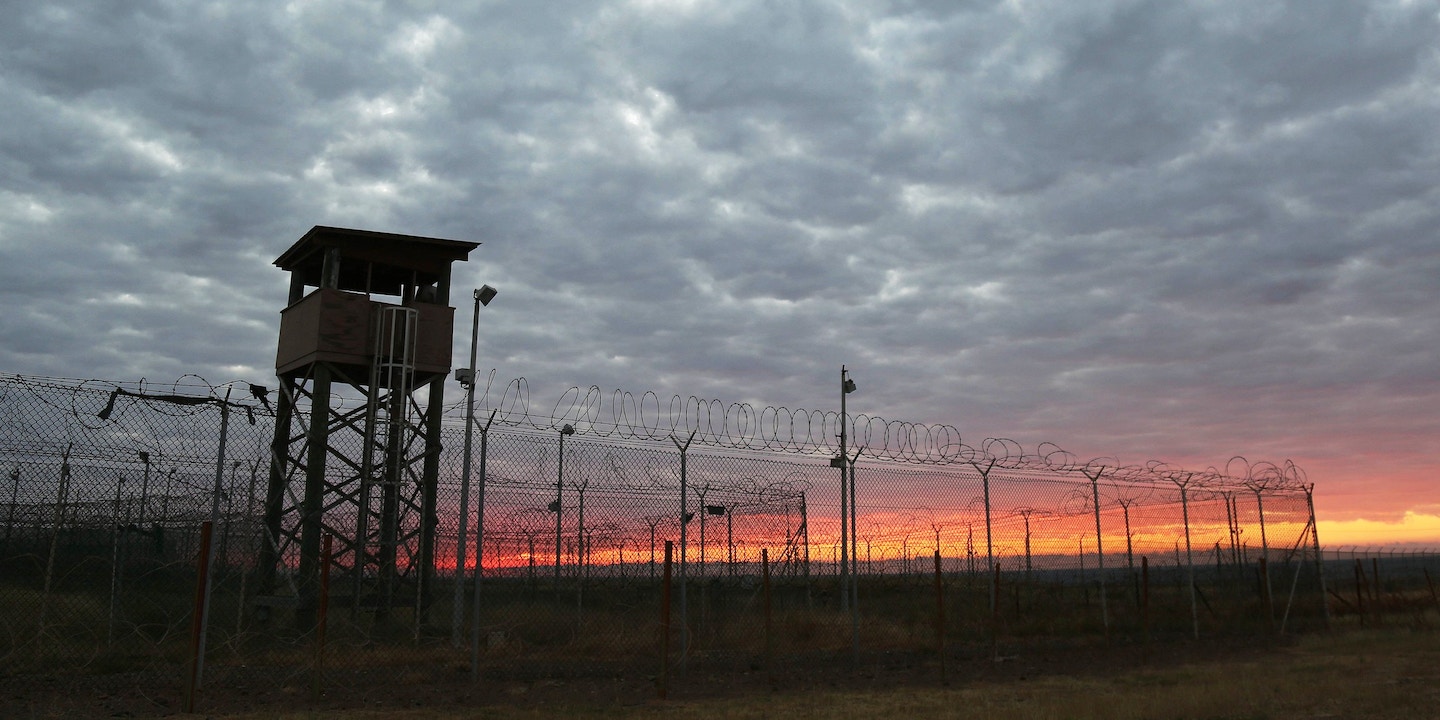 For over 17 years, Moath al-Alwi has been held at Guantánamo Bay without charge. A Yemeni citizen, al-Alwi is one of Guantánamo’s “forever prisoners,” those whom the U.S. government has not charged with a crime but is unwilling to release. On June 10, the Supreme Court declined to hear an appeal in his case, the latest setback in al-Alwi’s long effort to obtain due process rights. Even though the court wouldn’t take al-Alwi up, Justice Stephen G. Breyer wrote that it would only be a matter of time before the court had to grapple with the forever prisoners and the scope of the government’s power to hold them.

The Supreme Court rejection — and Breyer’s comments — briefly brought al-Alwi’s case back to national attention. Little noted, however, were the eyebrow-raising assertions that the government has made in this case about its powers to indefinitely detain not just al-Alwi, but anyone — including U.S. citizens.

“There is no bar to this Nation’s holding one of its own citizens as an enemy combatant.”

In a filing with the Supreme Court this April, lawyers for the Justice Department argued that the United States can continue to hold al-Alwi indefinitely without charging him. They also embraced the power to detain a U.S. citizen as an “enemy combatant”, an assertion they haven’t advanced openly since the era of President George W. Bush. Notably, the lawyers seemed to indicate, for the first time in a filing with the Supreme Court, that the government could even detain a U.S. citizen for as long as it has held al-Alwi, 17 years and counting, without charge.”

“There is no bar to this Nation’s holding one of its own citizens as an enemy combatant,” the filing read. Were al-Alwi a citizen, they argued, he “would pose the same threat of returning to the front during the ongoing conflict.” There were no “constitutional questions” raised by this hypothetical, they maintained.

The continued detention of al-Alwi has been justified by the government under the 2001 Authorization for Use of Military Force, a law passed in the days after 9/11. That AUMF entered the country into a state of war that seems to have no particular endpoint. It has also allowed the creation of a permanent state of legal exception that opens the door to practices like indefinite detention without trial. These legal powers are now being asserted by government lawyers almost 18 years after the law was passed to ensure that they extend even to Americans potentially detained as enemy combatants in the future.

“Detention without charge under the laws of war is meant to be finite, temporary, and exceptional — but that exception is becoming the rule. We’re now talking about a claim that detention can last potentially for life,” said Pardiss Kebriaei, an attorney at the Center for Constitutional Rights, a legal advocacy organization. Kebriaei has represented Guantánamo detainees in the past, including men now released from the prison. She argues that the ongoing detention of most prisoners — there are 40 still at Guantánamo — has little to do with security concerns.

“The idea that lifelong imprisonment of detainees is strictly necessary for U.S. national security, that there is no other way but imprisonment to mitigate any risk, is a farce,” said Kebriaei. “It continues to be sanctioned in part because the public cannot see for themselves the senselessness of continuing to hold these detainees. Five of them have been cleared for transfer by the government itself. Others are sick, aging, changed people who are close to two decades removed from the actions the government has used to justify their detentions.”

In the same filing in which the U.S. government reserved the right to indefinite detention, government lawyers also asserted that were al-Alwi caught in Afghanistan today, he could be held elsewhere — a reference, al-Alwi’s lawyer’s say, to rendition, the practice of covertly moving detainees across international borders, often to countries where they are at risk of maltreatment. In the April filing, government lawyers said that current legal agreements did “not deprive the United States of the authority to detain petitioner elsewhere.” 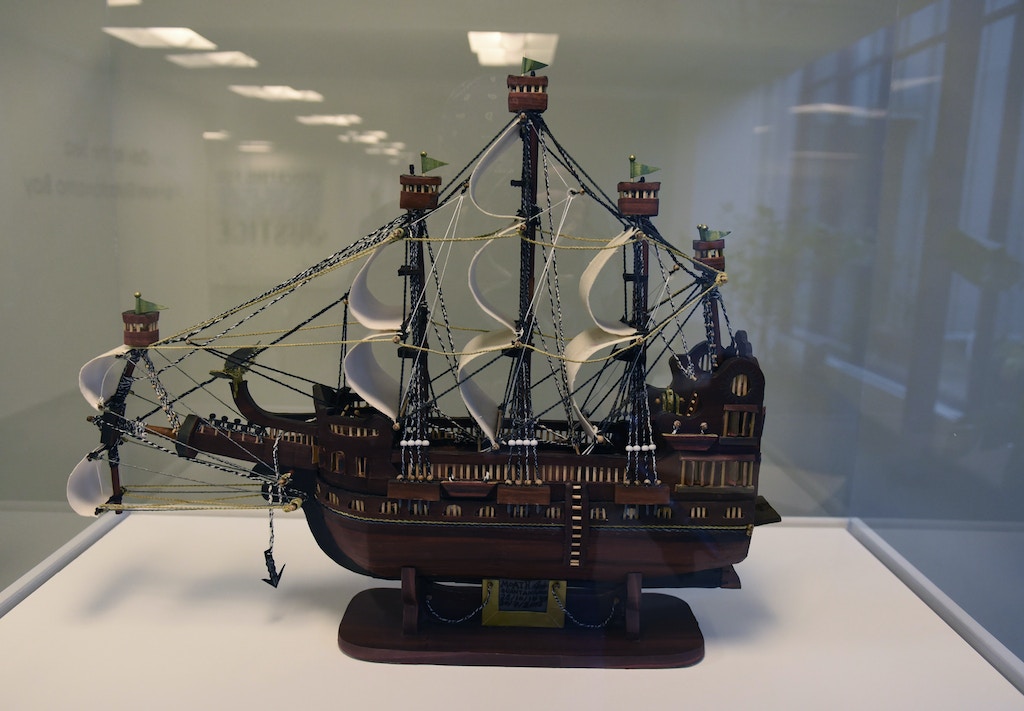 Moath al-Alwi’s three-masted cardboard ship is displayed at CUNY’s John Jay College of Criminal Justice in New York, on Nov. 22, 2017, as part of an exhibit of works made by Guantánamo detainees.

Imprisoned in his mid-20s, al-Alwi is now over 40 years old. During his time in Guantánamo, he has protested his detention by various means, including yearslong periods when he refused food and was subjected to painful force-feeding procedures. At one point during a hunger strike, his weight dropped to less than 100 pounds. More recently, he has begun making artwork, some of which was recently displayed at an event at the City University of New York School of Law. The government had previously tried to prevent the release of his art, which includes several model ships he built at Guantánamo using cardboard, plastic bottle caps, and other reclaimed or discarded materials.

“Even if you only care about U.S. citizens, then you should be very alarmed about what is being done to Moath.”

“Moath has been struggling against the injustice of his imprisonment at Guantánamo without charge or fair process for over 17 years,” said Ramzi Kassem, a professor at CUNY School of Law who represents al-Alwi along with a group of students through the school’s Immigrant and Non-Citizen Rights Clinic. “He has done that against all odds, most recently by expressing his thirst for freedom through his virtuosic ship models and in his other artwork, which the Department of Defense tried to censor.”

The next steps in al-Alwi’s legal challenge to his detention remain unclear, though his lawyers say that they plan to continue fighting for him. Kassem says that the government’s assertion that it can indefinitely detain or even administer rendition of prisoners like al-Alwi represents a degradation of moral and legal standards at Guantánamo Bay.

“For the Solicitor General of the United States to cavalierly suggest that [al-Alwi’s] extraordinary ordeal would be unremarkable even if it had been imposed on a U.S. citizen and to brandish overtly the threat of rendition shows just how cruel and inhumane both the government and the law have become in these cases,” Kassem said. “It also shows that even if you only care about U.S. citizens, then you should be very alarmed about what is being done to Moath.”