Joe Biden Says He Can Work With the Senate. The Last Time He Tried, Mitch McConnell Picked His Pockets Badly.

In 2012, the GOP was in trouble. Mitch McConnell turned to his friend Joe Biden for a lifeline. 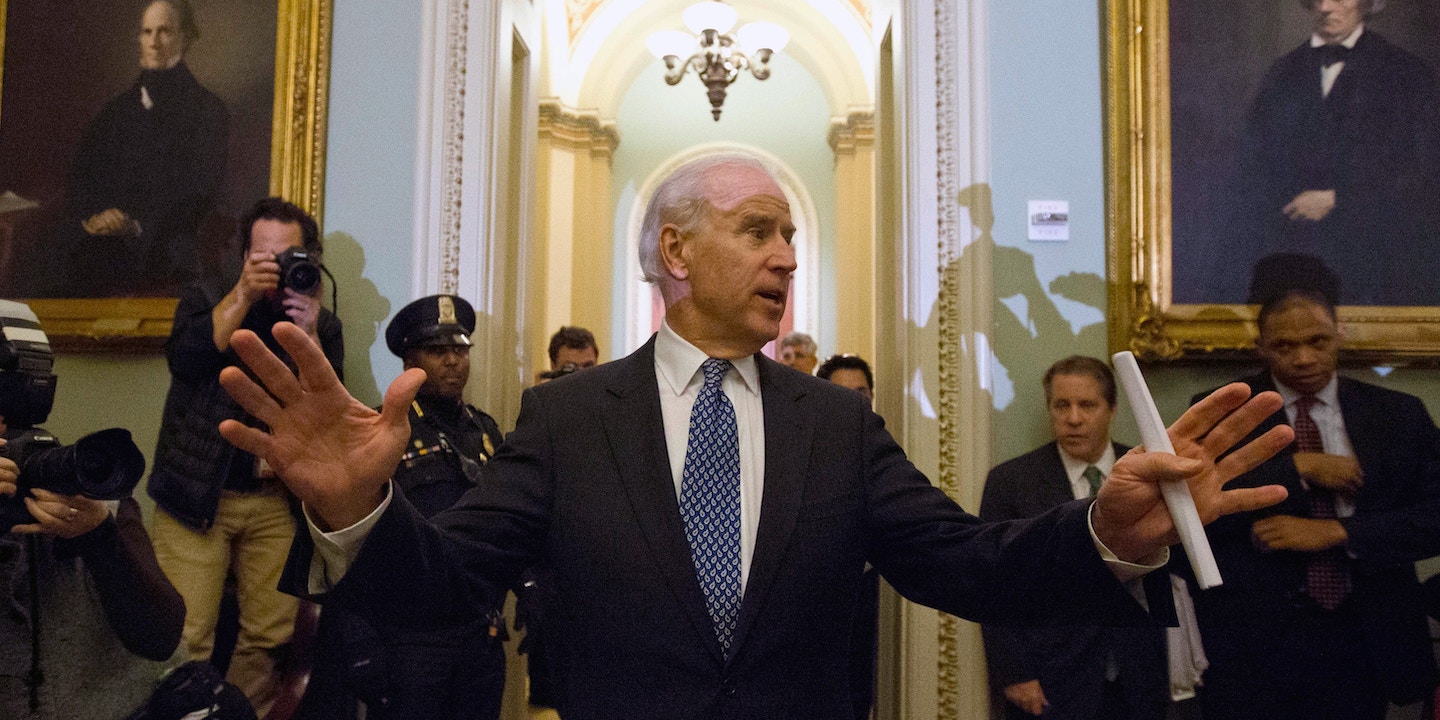 As the year 2012 wound down, Democrats hopefully eyed what looked to be one of the last opportunities for genuine legislative progress in a divided government. The party had just stomped Republican Mitt Romney at the polls in a post-Occupy campaign that centered on economic inequality. Democrats picked up two seats in the Senate, expanding their majority to 53 and adding Elizabeth Warren to their ranks. Though Democrats won more House votes nationwide and picked up a net of eight seats, Republicans held onto the newly gerrymandered lower chamber.

The hope was tied to the expiration of the tax cuts passed under George W. Bush. Republicans, despite losing the popular vote and only taking the White House in 2000 by a 5-4 Supreme Court decision, moved swiftly to pass an enormous tax cut tilted heavily toward the rich. To do so, they used a parliamentary procedure that could get around the filibuster in the Senate, known as budget reconciliation. The cost of doing so, however, is that policy enacted through reconciliation must expire in 10 years’ time.

By the time the legislation was set to expire in 2010, the tea party wave had shaken up Congress. The Obama White House urged Senate Democrats to extend the tax cuts, arguing both that they had a difficult political hand, and also that extending them in an unstable economic environment was good policy. White House economic adviser Larry Summers told a private meeting of Finance Committee Democrats that allowing the tax cuts to expire would “tank the economy,” according to a Senate aide at the time.

This makes Biden’s role in the tax-cut fight, perhaps his most significant involvement in policymaking as vice president, critical to examine closely.

The ensuing negotiations would involve a whole cast of characters from throughout the White House and across the aisle in the Senate. Its resolution, though, ultimately hinged on the intervention of then-Vice President and now-leading contender for the presidency Joe Biden. He has cited his ability to work with Republicans and conservative Democrats — up to and including segregationists — as one of his top qualifications for president. This makes his role in the tax-cut fight, perhaps his most significant involvement in policymaking as vice president, critical to examine closely. And up close, it doesn’t look good.

The Senate agreed to a two-year expansion at the end of 2010, but only after Sen. Bernie Sanders, I-Vt., delivered his viral, eight-hour old-fashioned filibuster on the Senate floor to draw attention to the fiscal giveaway.

The extension meant that the tax cuts were now expiring in 2012, and in order to repeal all of them — to go over what the media began calling the “fiscal cliff” — all Congress had to do was nothing. That, Harry Reid told me in an interview for my new book, was precisely his plan. “I wanted to go over the cliff,” said Reid, the Senate majority leader at the time. “I thought that would have been the best thing to do because the conversation would not have been about raising taxes, which it became, it would have been about lowering taxes.”

In other words, let all the rates go up, and then bargain with Republicans to reduce taxes just for the middle class and the poor. Then-Minority Leader Mitch McConnell similarly knew the difficult position going over the cliff would put him in, and in preliminary talks with Reid, he agreed to let rates on people making more than $250,000 per year go back up, if to slightly lower levels to pre-Bush. (McConnell aides would later say that McConnell had not firmly conceded anything, and that negotiations weren’t finalized.)

McConnell had a strong sense that Reid intended to go over the cliff and put Republicans up against a wall. Told that Reid had since confirmed that he indeed wanted to go over, a Republican operative said he found the admission unsurprising. “That’s consistent with his body language at the time,” said the operative, who wasn’t authorized to talk on the record about the negotiations. “He knew he could blame it successfully on the hard right in the Republican Party. Negotiations had reached an impasse. It wasn’t just spin, Reid was ready to go over.”

Reid felt like he had successfully pushed McConnell to the brink, buoyed by House Speaker John Boehner’s inability to get his unruly conference to agree to anything. It was now Sunday, December 30, and Democrats only had to hold out until Tuesday to find themselves in a dramatically improved political position, as the dawning of the new year would mean the tax cuts expired and automatically reverted to pre-Bush levels. At that point, it would be Republicans left pleading for rate cuts.

In desperation, McConnell reached out directly to Biden, calling him on the phone and explaining that Reid was refusing to be reasonable. Over the course of the day, McConnell and Biden struck a deal. “Biden gave Republicans everything they wanted in exchange for fixing the fiscal cliff problem,” the GOP operative recalled.

Biden, who served in the Senate from 1973 to 2009, and as vice president from 2009 until 2017, is now locked in his third Democratic primary contest for the presidential nomination. “The reason he has such good relationships with Republicans in the Senate is he never hesitates to put aside the highest priorities of his base in the interests of compromise,” the Republican operative said. “That’s also how you make life difficult in a primary.”

On the morning of New Year’s Eve, Reid was still feeling good about his position. That was until he saw McConnell take to the Senate floor and announce that he’d been in talks with the vice president, they were progressing well, and he was hopeful that they’d have legislation to move by the end of the day.

“He never hesitates to put aside the highest priorities of his base in the interests of compromise.”

As details of the deal began leaking out, progressive Democratic senators were floored. A large group of them — including Sanders, Sens. Sherrod Brown of Ohio, Jeff Merkley of Oregon, Sheldon Whitehouse of Rhode Island, Al Franken of Minnesota, and Tom Harkin of Iowa — stormed over to Reid’s office.

The deal was awful, they told Reid, and it had to be stopped. Reid told them what had happened, that it was out of his hands and that McConnell had gone around him to Biden. He said he was working on improving it and would be in touch throughout the day.

None of the senators had any business scheduled — it was New Year’s Eve, after all — so Sanders invited them back to his office in the Dirksen building. The Hart building has a popcorn machine, so Harkin asked his staff to bring some by. The crew ended up spending several hours together in Sanders’s office, thinking through potential strategies of opposition and waiting to hear from Reid.

Instead, one senator’s phone rang, and it was Joe Biden, calling to sell the deal he had cut. In classic Biden fashion, he offered a 10- to 15-minute soliloquy, a meandering argument that largely boiled down to: You can trust me; I’m your friend; this is a good deal. The senator could barely get a word in before the conversation ended.

Moments after he hung up, another cellphone rang, and it was Biden again. Unaware that the group was all together, Biden proceeded to call each of them, one after the other, delivering the same spiel. Biden’s flimsy argument, and his filibustering style of delivering it, became a running joke among the senators. “No one found it remotely persuasive,” said one person in the room.

Biden’s own characterization of his lobbying effort didn’t differ substantially from the recollection of those in the room. Asked that day by reporters what he had said to wavering senators, he replied: “I said, ‘This is Joe Biden and I’m your buddy.’”

Ultimately, it fell to Reid to drag the progressive senators into line. Once it was clear that the White House was on board with Biden’s deal, and McConnell was all in, that meant that there would be at least 70 or 80 votes for it. The progressive bloc could vote no, but it would only send a message of discord and have no effect on the outcome, Reid told them, coaxing them to support the deal he himself loathed. In the end, all the progressive senators except Harkin voted for the deal. It passed 89-8.

Years later, Reid still regrets how it went down. “If we’d have gone over the cliff, we’d have had resources to do a lot of good things in the country — infrastructure development — but it didn’t work out that way,” Reid said. Letting all the tax rates go back to pre-Bush levels would have yielded the Treasury around $3 trillion over 10 years. Instead, the deal ultimately brought in around $600 billion (or would have, if taxes hadn’t been slashed again by Republicans in 2018). Without the deal, taxes on dividend payments to the rich would have been set at 39.6 percent. Under the terms of the deal, they would be set at 20 percent, meaning that the super-wealthy would be paying lower tax rates on their passive dividend income than some working people would pay on their salaries.

I asked Reid how Biden defended the strategy that day.

“It wasn’t one that I agreed with,” he replied politely, “so you’d have to ask some of his people.”

Ryan Grim is the author of “We’ve Got People: From Jesse Jackson to AOC, the End of Big Money and the Rise of a Movement,” published by Strong Arm Press.