The environmental activists want the DNC to reverse its position against hosting a climate change debate for presidential candidates. 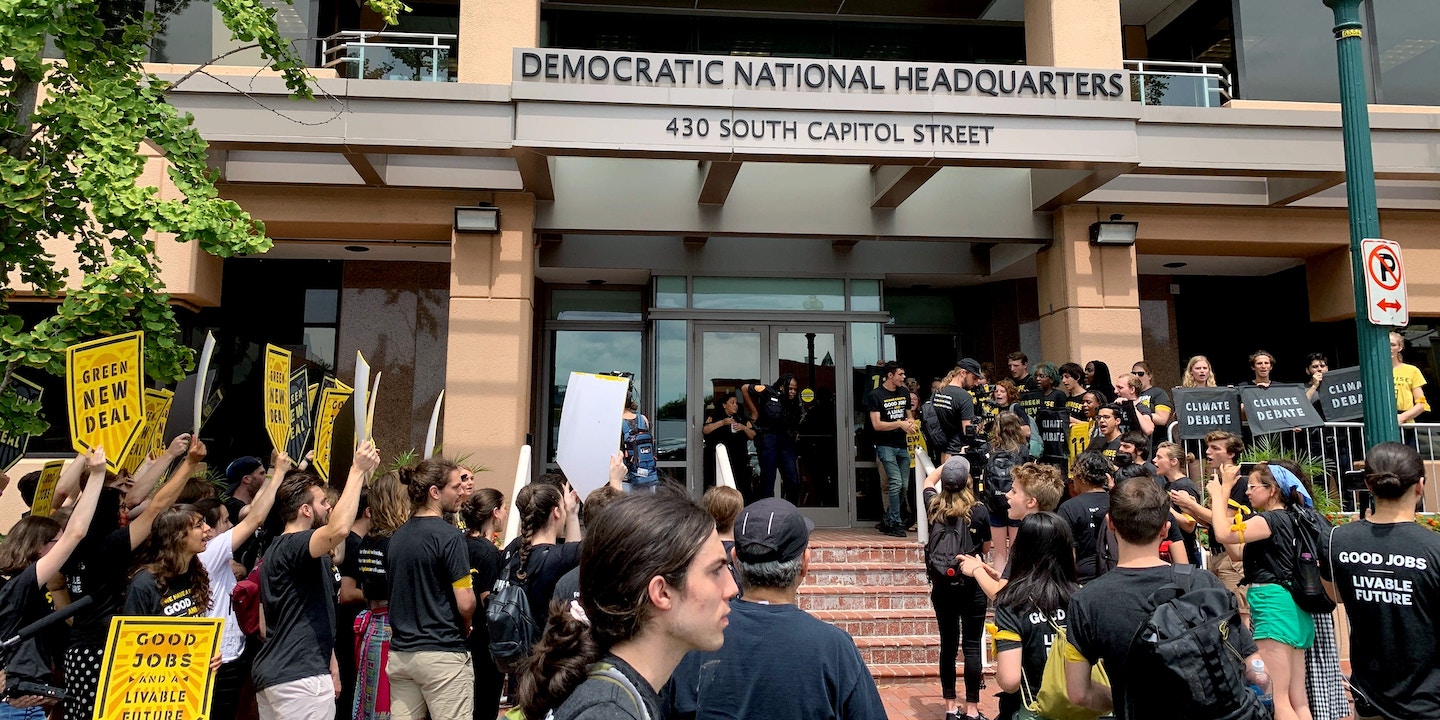 About 100 young activists with the Sunrise Movement rallied outside the Democratic National Committee headquarters on Tuesday, demanding the party to reverse its ban on holding a climate change debate among the 2020 presidential candidates.

Activists have been calling for a full presidential debate dedicated to climate change as the issue has become a top priority for voters, pushing candidates to develop and release detailed policy proposals in the process. In addition to the protest in Washington, D.C., they’re calling on supporters to sign a petition demanding a climate debate.

“It’s an emergency, and we need our leaders to act like it,” said Abby Leedy, a protester from Philadelphia, outside the DNC headquarters a few blocks from the U.S. Capitol.

The DNC is not only refusing to hold a debate but threatening to bar any candidates who participate in a third-party climate debate on their own from future DNC debates. DNC Chair Tom Perez said in a Medium post earlier this month that the party would not hold any issue-specific debates because it could not allow individual candidates to dictate the terms of debate. His position came in response to Washington Gov. Jay Inslee, who has made climate change the centerpiece of his presidential campaign and has called for a climate-centric debate.

“If we change our guidelines at the request of one candidate who has made climate change their campaign’s signature issue, how do we say no to the numerous other requests we’ve had?” Perez wrote. “How do we say no to other candidates in the race who may request debates focused on an issue they’ve made central to their own campaigns?”

Sunrise activists rejected Perez’s framing of the issue. “When you say this is a single issue, we know that’s not true,” said Leedy. “We know that this affects every aspect of our lives.”

In May, the Sunrise Movement wrapped up its nationwide tour by calling for a mass mobilization to pressure Democratic contenders to center on climate change in the 2020 election and pledge to refuse contributions from the fossil fuel industry. So far, 18 candidates have signed the environmental group’s No Fossil Fuel Money pledge, including Inslee, Pete Buttigieg, and Sens. Bernie Sanders, Elizabeth Warren, Kamala Harris, and Cory Booker. Former Vice President Joe Biden is one of six candidates who have not yet signed.

Climate change has emerged as one of the top issues voters care about ahead of the 2020 election. A recent CNN poll found a majority of likely Iowa caucus participants consider climate change to be the greatest threat against humanity.

The protest continued into Wednesday, with a couple dozen activists camping out outside the DNC building overnight. Several members of Congress swung by to show their support, including Reps. Ayanna Pressley, Deb Haaland, and Ro Khanna. Presidential candidates stopped by as well, with Sanders providing pizza on Tuesday night, Inslee bringing cookies, and Julián Castro bringing breakfast on Wednesday morning.

“Their support energized us and showed that our sacrifice is being heard and that we have a growing team of elected officials on our side,” said Zina Precht-Rodriguez, a 22-year-old activist from Brooklyn, New York, who spent the night outside the DNC. “Right now we feel invigorated, celebrating the traction we have gained from this sit-in, and planning our programming for the rest of the day.”

Good morning! It’s sunrise on the @DNC steps! Rested and ready to start day 2 of sitting in to demand a #ClimateDebate pic.twitter.com/xqnEUdPHwW

The protest is just the latest direct action taken by Sunrise, a youth-led movement incorporated in 2017. In November, the environmental activists occupied Rep. Nancy Pelosi’s office with then-incoming Rep. Alexandria Ocasio-Cortez, D-N.Y., to demand the creation of a select committee on climate change. Though Pelosi did not create a select committee, that protest helped launch the Green New Deal onto the national spotlight. Nearly every declared Democratic presidential candidate supports the Green New Deal resolution introduced by Ocasio-Cortez and Sen. Ed Markey, D-Mass., and several have introduced their own plans on confronting the threat of climate change.

The first round of debates will take place in Miami, Florida, this week, with 10 candidates appearing on the debate stage on Wednesday and another 10 doing so Thursday. The second round will be held on July 30 and 31 in Detroit, Michigan.

Update: June 26, 2019
This piece has been updated to include details about the protest continuing into Wednesday.