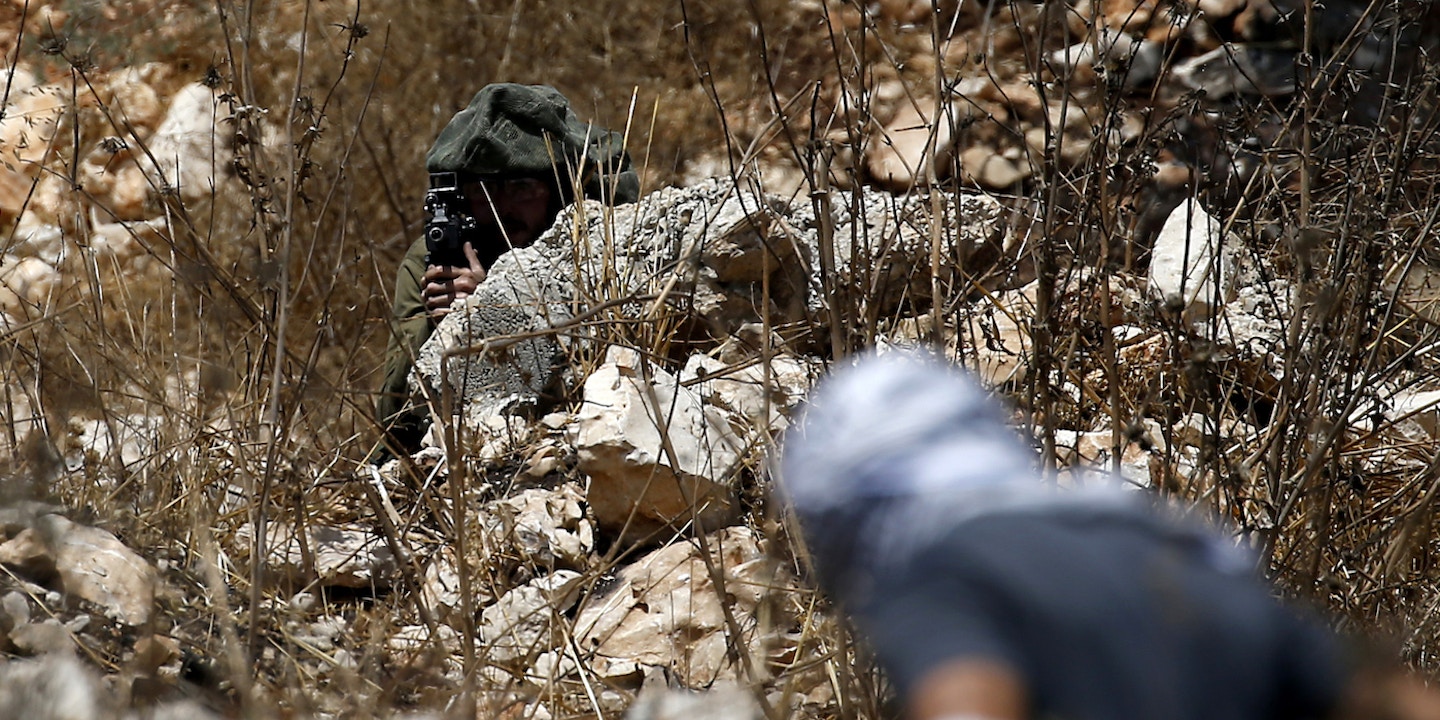 Young American Jews from the IfNotNow movement, who want to end their community’s support for the Israeli occupation of Palestinian territory, succeeded on Friday in getting two more Democratic presidential candidates, Pete Buttigieg and Joe Biden, to denounce Israel’s military rule over millions of disenfranchised Palestinians.

Activists from the group have been trailing Democratic candidates as they campaign in New Hampshire, and urging them to say, on camera, that they would work to end the occupation, if elected. Both Bernie Sanders and Elizabeth Warren expressed their support for the group’s position at recent events, triggering outrage from far-right Republicans and unease from establishment Democrats who are reluctant to criticize even the increasingly far-right Israeli government of Prime Minister Benjamin Netanyahu.

Buttigieg was pressed on the issue by Erin Sandler, 29, at a campaign event in Laconia, New Hampshire. “All my life, politicians have talked about a two-state solution for Israel, but don’t address the ongoing military occupation,” Sandler said to Buttigieg. “Yes or no, are you willing to condemn the occupation?”

“The Occupation has to end” — @PeteButtigieg

An important step for both Mayor Pete & the Democratic party. It’s clear that this is the baseline position for 2020 candidates on Israel: acknowledge Israel’s military Occupation as the reality on the ground and call for it to end. pic.twitter.com/h8hqs8dOtn

“The occupation has to end,” Buttigieg replied, to applause.

He went on to note that even Ariel Sharon, a right-wing Israeli prime minister, not only called for an end to the occupation in 2003, but told Israelis bluntly: “It is occupation, you might not like this word, but it’s really an occupation.”

IfNotNow welcomed Buttigieg’s remarks, while noting that it was a departure from more conservative positions he has taken in the past, and said that its members still need to hear how he, and other candidates, “will use American leverage to pressure Israel to end the Occupation.”

Democrats eager to defend Israel from sensing even the slightest uptick in pressure from Washington to respect international law appear to have been alarmed by IfNotNow’s success in raising the issue.

As Daniel Marans reported for the HuffPost, three days before IfNotNow activists confronted Buttigieg and Biden, a group of pro-Israel Democrats, led by the pollster Mark Mellman, sent a memo to all of the Democratic presidential candidates advising them how to respond to the young voters. Under the provocative subject heading: “WARNING on Anti-Israel Campaigners,” Mellman suggested, without evidence, that the American Jews confronting the candidates might not “acknowledge Israel’s right to exist at all,” and aimed to elicit comments that would be “a victory for anti-Israel forces.”

Mellman argued that the question about pressing Israel to end the occupation, “wrongly suggests Israel alone is responsible for the current impasse in negotiations, ignoring the fact that the Palestinian leadership has consistently refused offers for a two-state solution.”

Mellman also described the approach of asking the candidates direct questions about the occupation as somehow unfair. “Senator Warren was a victim of this hit-and-run camping [sic] tactic,” Mellman wrote, referring to the candidate’s pledge to IfNotNow activists on Monday that she would press Israel to end the occupation.

If asked about the occupation, Mellman suggested, candidates should offer this “principled, Democratic, pro-Israel response to this question,” beginning with the words: “I strongly support a two-state solution to the Israeli Palestinian conflict.”

IfNotNow takes its name not, as Ivanka Trump might think, from remarks attributed to a Harry Potter actress, but from a famous saying of the first-century Rabbi Hillel the Elder: “If I am not for myself, who will be for me? If I am for myself alone, what am I? If not now, when?” The group’s sense of impatience with the American government’s longterm reluctance to press Israel to wind down an occupation that has endured for 52 years was evident in its members response to how Biden responded to their questions at two events in New Hampshire, on Friday and Saturday.

Asked first by Elias Newman, 26, if he would be prepared to pressure Israel, the former vice president began with a deflection, saying, as Mellman had suggested, “There’s no answer but a two-state solution.” He then added, in a puzzling choice of words, “I think the settlements are unnecessary,” before pivoting back to the pro-Israel talking points by suggesting that pressure should also be put on Palestinian leaders, who need “to be prepared to stop the hate.”

.@JoeBiden just said 'The Occupation is a real problem' and we're happy to hear it: this is a baseline position every 2020 candidate needs to take. But when we asked @JoeBiden if he'd pressure Israel to end the Occupation, he deflected to his record. pic.twitter.com/1AIQ7Ubl3g

Pressed to say whether he considers the occupation “a human rights crisis,” Biden replied, “I think occupation is a real problem, a significant problem.” When he was then asked if he would pressure Israel to end the occupation, Biden said that he already had done so, both as a senator and as vice president, and referred Newman to his record.

Newman, who is an IfNotNow fellow, said in a statement later that Biden’s prior record did not include applying effective pressure on Israel. Describing his comments as “the bare minimum we should expect from Democratic hopefuls,” Newman said that “the crisis in Israel/Palestine is due in no small part to the failed policies of the Obama Administration, during which Israel’s decades long military occupation became more permanent than ever.”

What he and the other young American Jews want to see, Newman added, is something other than “just a continuation of tired Democratic rhetoric that condemns the actions of Netanyahu in word without committing to meaningful action to hold the Israeli government accountable for its policy of endless war and dispossession that violate Palestinian human rights every single day.”

That exasperation with the status quo was even more clearly stated on Saturday when Sarah Kate, another IfNotNow member, pressed Biden to acknowledge his own part in permitting the growth of the Israeli settlements in the occupied West Bank, and the annexed East Jerusalem and Golan Heights, during his years in the White House and Senate.

Yesterday our member, Sarah Kate, pressed @JoeBiden on the specifics of how he‘ll pressure Israel to end the occupation. She asked 3 times. The more she pressed the more Biden retreated into AIPAC’s anti-Palestinian & false talking points. pic.twitter.com/GdURA3r1FF

“Yesterday you said Israel’s military occupation of Palestinians is a huge problem, and to refer to your past record for your plan to pressure Israel,” Kate said to Biden. “But the occupation only got worse under your administration, with more settlements and home demolitions than ever before. Will you commit to meaningfully pressuring the Israeli government to end the occupation?”

“Yes, but,” Biden began, “you also gotta pressure the Palestinians, to stop the hate, to stop calling for violence.” He then shifted directly into Mark Mellman’s suggested pro-Israel talking points, by changing the subject to the Palestinian leadership’s failure to accept the supposedly generous terms dictated to them by Bill Clinton and Ehud Barak at Camp David in 2000. “They turned it down, they poked them in the eyes,” Biden said, endorsing a pro-Israel version of the deal on offer that was thoroughly debunked by a senior member of Clinton’s negotiating team, Rob Malley, in 2001.

Biden, who entered the Senate in 1972 — just five years after Israel seized the West Bank, Gaza, East Jerusalem and the Golan Heights — then cited a friendly chat he had with Netanyahu more than 35 years ago, when the future prime minister was deputy chief of mission to the Israeli Embassy in Washington, a post he held from 1982 to 1984.

“It takes two to do this, and Bibi knows I completely disagree with him,” Biden said, using Netanyahu’s nickname. “As a matter of fact, he had a picture he showed me that I signed for him when he was a, when he worked for the U.S., for the Israeli ambassador here, way way long ago, when we were both — I said, ‘Bibi I love you, but I don’t agree with a damned thing you say.'”

Pressed further, Biden reiterated that the Obama administration had “constantly” pressed Israel to be aware of “what they can and cannot do, relative to what is accepted internationally.”

“We spoke out against their occupation in our administration,” Biden said, “but they are an ally. They are an ally and the fact of the matter is, they’re entitled to have Jewish state in the Middle East that’s free and secure. They are responding, they are over-responding to what’s happened.”

Asked for a final time what concrete actions he would take “to support the freedom and dignity of Palestinians living under occupation,” Biden again put the onus first on the occupied people. “I will tell them to accept the notion that Israel has the right to exist,” Biden said, “and I will insist on Israel, which I’ve done, to stop the occupation of those territories, period.”

Another presidential candidate, Cory Booker, refused to even use the word “occupation” when asked by an IfNotNow activist in New Hampshire on Saturday if he thinks Israel’s military rule of millions of disenfranchised Palestinians “is a human rights crisis.”

Yesterday, we asked @CoryBooker “Do you believe the Occupation is a human rights crisis for Palestinians?” He got visibly frustrated.

He admits: “If that's your issue I would understand if you want to support somebody else”

Looks like he’s choosing @AIPAC over the grassroots. pic.twitter.com/vPX5WH1P2O

“You’re not going to get me to address the question as you want, and I know that that’s a question you’ve been asking every presidential candidate,” Booker said, revealing that he did, indeed, get the memo. But, he insisted, “I’m working on this issue, probably more than any other foreign policy issue.”

“We may not agree on strategies,” he said, “but we agree on outcomes.”

As my colleague Alex Emmons revealed in March, Booker told activists from the American Israel Public Affairs Committee that he is so close to the group’s president, Mort Fridman, that they “text message back and forth like teenagers.”

In April, AIPAC paid to run Facebook ads — focused mainly on users in three important Democratic primary states: California, Texas and Florida — urging its members to press Bernie Sanders, the race’s most prominent Jewish candidate, to dial back his criticism of Israel’s human rights abuses in the occupied territories.

This article was updated on Sunday to include newly released video of IfNotNow activists confronting Joe Biden and Cory Booker on Saturday in New Hampshire over their record on the Israeli occupation.