Chuck Schumer, in Meeting With Progressive Caucus, Said He Was Surprised House Democrats Waved Through the Senate Border Bill

The Senate minority leader said he had expected the House to pass a stronger bill, after which the two chambers would negotiate a compromise. 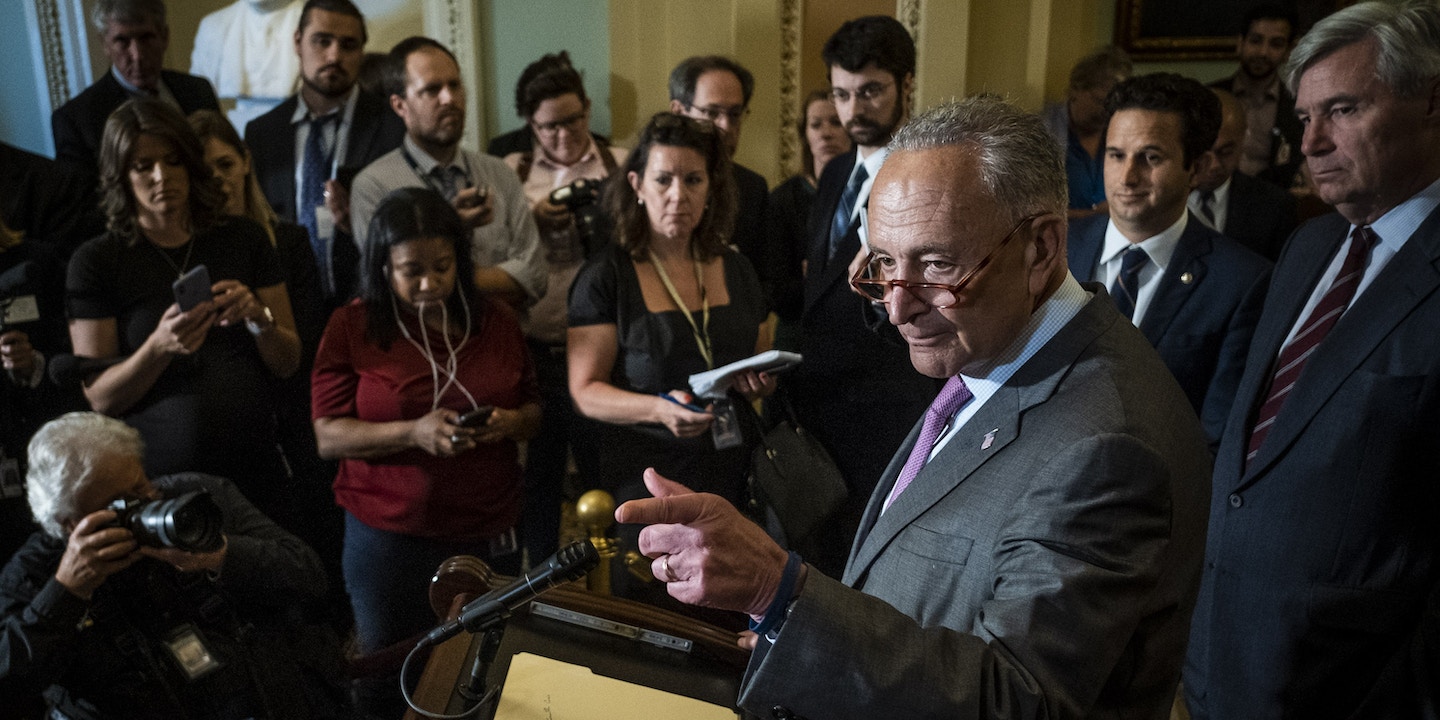 Schumer’s attendance at a House meeting was unusual, and a handful of CPC members, including Reps. Jared Huffman and Barbara Lee of California, and Ilhan Omar of Minnesota, took the opportunity to press Schumer on the Senate’s performance during the fight late last month over an emergency spending bill related to the border crisis.

House Democrats broadly considered the Senate bill to be far too weak, handing President Donald Trump billions of dollars with no real requirements that the federal government improve conditions at the camps where migrants are concentrated. Many House Democrats worried that, under the Senate bill, Trump would be able to siphon money away from humanitarian relief toward policing migrants. The House, in response, passed an alternative bill that mandated that contractors improve conditions or lose contracts. The Senate took up a vote on the House bill and rejected it, instead sending its own version over to the House.

CPC leadership had invited Schumer to the meeting prior to the border bill blowup. His attendance, however, came at a time of serious internal crisis within the Democratic caucus, as House Speaker Nancy Pelosi has lashed out at the so-called Squad, the four Progressive Caucus members — Omar, Alexandria Ocasio-Cortez, Ayanna Pressley, and Rashida Tlaib — who voted against the bill and vehemently opposed its passage as complicity with the abuse of the adults and children held there.

Schumer, in response to questions, told the Progressive Caucus members that the Senate had always expected the House to pass a stronger bill, after which the two chambers would negotiate a compromise — either informally or through a conference committee. Instead, House leaders simply waved through the Senate bill without letting him know they planned to cave. Schumer “truly didn’t expect the House to pass the Senate bill unamended,” said one person in the room — a recollection that was confirmed by multiple others.

“He said he was surprised the House didn’t ask for a conference committee. It could have,” said another member in the room. “But he also gave a somewhat lame answer on Senate Dems actions.”

Schumer, in his opening remarks to the caucus meeting, which roughly 30 members attended, was at pains to make clear that he had no intention of undermining Pelosi, with whom he said he has a constructive working relationship. But, he said, he was glad to meet directly with the caucus to make sure that communication channels remain open, and he hoped to make such meetings a regular occurrence.

The House bill, which was strengthened after negotiations with the CPC, required detention center contractors to meet certain humane conditions or have their contracts revoked, among other mandates. That bill passed the House but failed in the Senate, and House leaders have blamed the lopsided Senate vote against the House version as forcing their hand.

The House still had the opportunity to move to conference, but elected not to do so. Schumer’s analysis maps with that of Sen. Jeff Merkley, D-Ore., who made a similar point at the Netroots Nation conference last week. “The complete assumption on the Senate side was that Speaker Pelosi would take it to conference, and she didn’t,” said Merkley.

Drew Hammill, deputy chief of staff to Pelosi, said that the way Majority Leader Mitch McConnell, R-Ky., refused negotiations cut off the possibility of a conference. “We were just as hopeful as Senate Democrats that McConnell would honor our wishes to hold a conference to get a stronger bill for the children,” Hammill said. “Leader McConnell’s actions have changed how the House and Senate will be relating to each other in the future.”

A spokesperson for Schumer also put the blame on McConnell. “Sen. Schumer was honored to have been invited to meet with the progressive caucus on Tuesday,” he said. “They had a good discussion and agree that Democrats are united in realizing that Senator McConnell and Senate Republicans are the biggest impediment to achieving our shared progressive goals on a number of issues.”

Merkley, on the Senate floor, had voted against even the more aggressive House measure, finding it too weak. He was joined in that assessment on the House side by the Squad, who voted against the House proposal as not going far enough to rein in Trump administration abuse at the border, by not putting in place legal mandates that conditions be improved. Pelosi later mocked the four no votes for being unable to rally more of their colleagues. “All these people have their public whatever and their Twitter world,” she told Maureen Dowd of the New York Times. “But they didn’t have any following. They’re four people and that’s how many votes they got.”

Trump soon joined Pelosi in attacking the four Democrats, suggesting that they “go back” to their countries, and that Pelosi would be happy to make arrangements. The president again assailed the Squad at a campaign rally in North Carolina on Wednesday night, with a particular focus on Omar, culminating in a frightening crowd chant of “send her back.”