Demands that CBP spend millions to upgrade cameras used to read license plates were orchestrated in part by a company that hoped to profit. Rep. Chuck Fleischmann often strikes a Trumpian tone on border security, stoking fears during television appearances and on social media about a caravan of Central American migrants, and repeating the president’s pledge to build a wall to prevent unauthorized immigration.

In April 2018, during an appropriations committee hearing, the Tennessee Republican took a more subdued and technical approach to immigration issues when quizzing then-Customs and Border Protection chief Kevin McAleenan. Fleischmann, looking down to read from a paper in front of him, wanted to know if McAleenan was on schedule to implement an upgrade of license plate reader technology at the border, as mandated by a previous appropriations bill.

McAleenan thanked the committee for its support and pledged continued work to upgrade LPR technology along the border.

A few days after the exchange, a lobbyist representing Perceptics, a tech company that sold state-of-the-art LPR cameras and technology to the government, emailed her team to confirm that Fleischmann had “asked about CBP’s plan to modernize its LPRs as we asked his office to do,” along with a link to a video clip of the hearing. 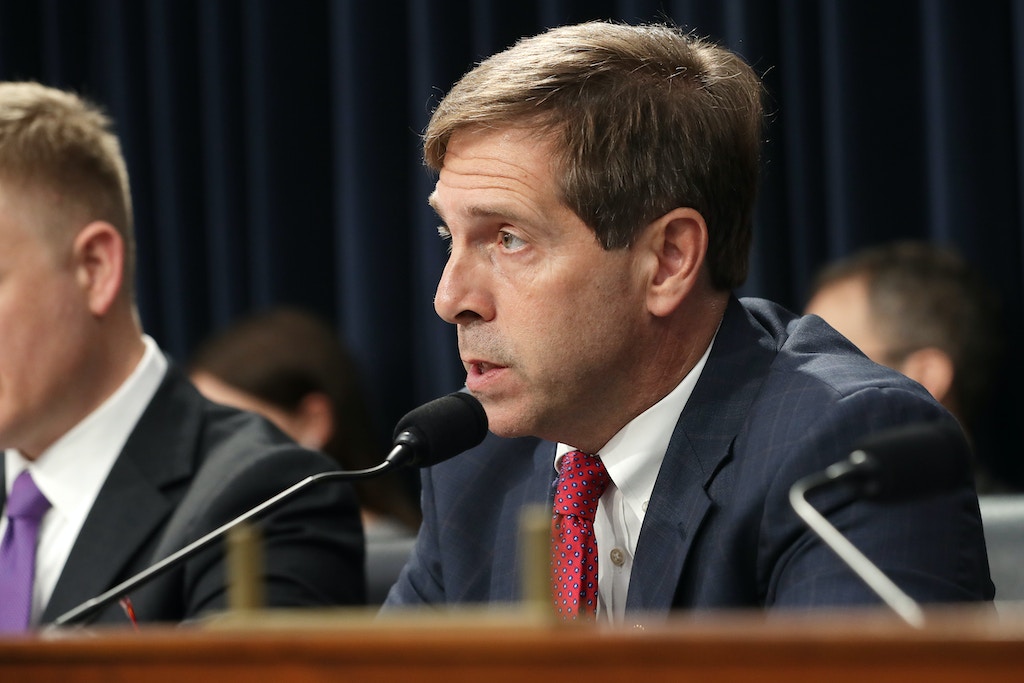 The lobbyist’s email, along with several others in a cache of thousands of hacked documents from Perceptics dumped on the dark web in June, reveal that Fleischmann’s question — and the congressional demand that the agency spend millions of dollars to upgrade the cameras used to automatically read and identify license plates — had been orchestrated in part by a company that hoped to profit from the decision. Fleischmann’s office did not respond to a request for comment.

Following the hack, the CBP suspended its contract with Perceptics. But the emails provide a rare inside view of how the border security industry plays a quiet role in shaping immigration policy — and, in this case, how private contractors maneuvered to benefit from heated debate over President Donald Trump’s border wall.

In 2017, Trump announced that he would end the Deferred Action for Childhood Arrivals program — which provides legal protections for undocumented youth, also known as “Dreamers” — and demanded that protections only be restored in exchange for funds to build a wall at the U.S.-Mexico border. The following year, GOP lawmakers attempted to hammer out a compromise that would enshrine rights for Dreamers while providing funds for Trump’s border security demands.

As lawmakers debated these proposals, lobbyists from Perceptics were at work finding congressional sponsors to seed both nascent border security bills with dedicated funding for border security agencies to continue buying and upgrading LPR technology.

The emails provide a rare inside view of how the border security industry plays a quiet role in shaping immigration policy.

In June 2018, Lucia Alonzo, chief of staff to Ferox Strategies, an outside lobbying firm to Perceptics, wrote to her client to inform them that then-House Speaker Paul Ryan had planned votes on two competing immigration bills. “We have obtained a leaked copy of the new ‘compromise’ immigration bill under development in the House,” she wrote. The compromise bill, as well as a rival conservative alternative from Goodlatte, the lobbyist noted, included provisions that Perceptics had pushed to lawmakers to boost funding for its products.

“In summary,” Alonzo continued, “we have ensured that BOTH of the immigration bills headed for votes in the House authorize $125 million for LPR modernization, adding more weight and urgency to our request for appropriations funding LPR modernization.”

The LPR provisions were among many provisions calling for spending on security measures well beyond the wall. Both bills also called for the funding of unmanned aerial vehicles to patrol the border, tower-based security technology, radars, detention facilities, and an array of biometric technology to identify and track undocumented migrants, including DNA testing.

While dozens of private security firms and trade groups lobbied on the immigration proposals, there is little public information on whether the lobbyists directly authored the bills.

Perceptics’ hacked emails, however, show a clear fingerprint. The legislative texts of both House bills include nearly identical language on LPR funding. The drafts also codify a pilot program in Laredo, Texas, to use the technology on high-volume tractor-trailer ports of entry.

Both bills ultimately failed as conservatives rallied against the compromise legislation put forward by moderates, and Democrats and moderates killed the conservative border bill.

But the lobbyists continued to press for further opportunities.

In a follow-up email just before the Thanksgiving holiday last year, Alonzo sent talking points in support of the $125 million in provisions to Fleischmann’s congressional staff. “As we head toward a final FY 2019 funding package, I did want to send a quick refresher on Perceptics and our asks for your reference,” she wrote, thanking Fleischmann’s team for its support and going on to explain the need for automated tractor-trailer processing and LPR upgrades. Perceptics’ cameras along the borders, Alonzo noted, were 10 years old and required replacement.

The provisions, Alonzo added, were broad and would not guarantee an exclusive contract for Perceptics over another LPR vendor. Still, the language provided many opportunities for the company to build its revenue. Automating cargo processing at ports of entry, like the test project at Laredo, would cost another $175 million, but would result in savings from reduced man-hours and wait times at the border, Alonzo told Fleischmann’s office.

In the Senate, GOP leadership rallied behind similar legislation to revamp and finance an array of border security and detention facilities. Sen. John Cornyn, R-Texas, introduced two major immigration bills: the Building America’s Trust Act, sponsored in August 2017, and the Secure and Succeed Act, introduced the following month and later endorsed by the White House. Both border security and wall-funding bills had nearly identical LPR provisions on the Laredo pilot program and the $125 million in upgrades of existing cameras.

The legislative texts of both House bills include nearly identical language on license plate reader funding.

The inclusion in the Cornyn bill came after over a year of dedicated, behind-the-scenes advocacy.

In 2017, Alonzo wrote to Perceptics CEO John Dalton that officials at his company should consider giving money to Cornyn because the Texas Republican “wants to be at the forefront of immigration and border policy in the Trump era, he is very powerful in the Senate as Majority Whip, and he’s arguably the most powerful member of Texas’s congressional delegation.”

The team of lobbyists also had a close relationship with the senator through a trusted confidant.

Matt Johnson, a former Podesta Group lobbyist, had previously worked for Cornyn as his chief counsel. Before the Podesta Group disbanded in late 2017, the firm included Cristina Antelo, a Democratic lobbyist working with Perceptics, and provided lobbying services to Perceptics.

“Hey fellas,” wrote Antelo, now a principal at Ferox Strategies, in an email to Perceptics executives last year, attaching an invitation to a fundraiser hosted by Johnson. “Attached is an invite for an event with Cornyn next week hosted by our buddy Matt. I think it’s a good idea to participate and not only donate to him but to do it through Matt to make sure we keep up the connection,” she wrote.

Cornyn, Antelo added, “is in leadership, from Tx so on the border, sits on the judiciary committee and has always been helpful to us including this last year by including our language in his border security bill. Can you guys write a check for $1k and can one of you attend?”

Federal Election Commission records show that Dalton ultimately donated to Cornyn’s leadership committee, the Alamo PAC, providing $1,000 in 2017 and $500 in 2018.

In a statement to The Intercept, Antelo explained that her team “spent time on Capitol Hill educating members of Congress about the need to replace aging license plate reader cameras at US land borders, including the allocation of funds to be made available for an open, competitive bid procurement for their replacement.”

“Perceptics supports the mission of homeland security and continues to have every confidence in the superior quality of their equipment,” she added.

Since the attacks on September 11, 2001, the government has spent nearly $1 trillion on a variety of counterterrorism and Homeland Security measures. The wave of cash has flowed to a range of private contractors, including those with a special focus on technology used to identify and track individuals and vehicles entering the country.

While government austerity measures in 2011 briefly slowed down the spending spree, the immigration debates in Congress, which have often centered around border security, have revived efforts by industry to harness government spending on surveillance, detention, and other forms of security technology. The 2013 bipartisan immigration bill, for example, included money for drones, helicopters, detention centers, and an array of surveillance technology to prevent future unauthorized immigration.

Drew Brandewie, a spokesperson for Cornyn, wrote in an email to The Intercept that “LPR technology has been deployed on the border for a long time and has been included in many immigration/border security bills and supported on a bipartisan basis,” and noted that LPRs were also included in the 2013 bipartisan immigration bill.

It’s well known that the politics of immigration have long reflected a compromise between conservatives seeking greater enforcement on unauthorized immigration and liberals seeking legal protections for individuals without documentation. In private, however, the many private contractors that seek to profit from conservative demands on border security have a hidden hand in crafting the legislative text.