These 7 Prominent Conservatives Have Nothing in Common With White Supremacists, Nothing at All 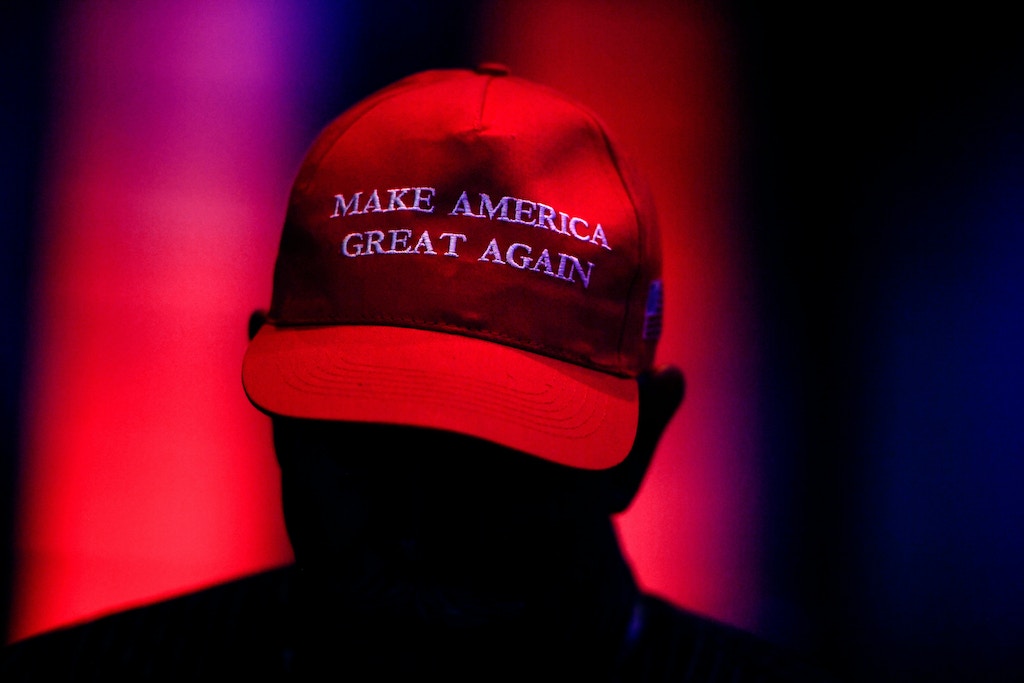 A man wears a MAGA hat during the Western Conservative Summit in Denver on July 12, 2019.

In the wake of the El Paso massacre, the prominent conservative commentator Ben Shapiro — aka the “cool kid’s philosopher” — took to Twitter to berate those who dare draw any kind of line between President Donald Trump, the Republican Party, and U.S. conservatives on the one hand and white nationalist terrorists on the other.

So, we now have two separate NYT columnists arguing that all conservatives are basically violent white supremacists, but slightly more subtle. Let me put this gently: f*** yourselves. pic.twitter.com/aqJjZjfPra

Your conflation of all conservatives with white supremacist monsters who despise actual conservative principles -- you know, like the universal, non-racially-based applicability of the principles of Western civilization -- is cynical, deliberate, and disgusting.

Got that? “Conflation” is “cynical, deliberate, and disgusting.”

Shapiro himself is Jewish and has been targeted by white nationalist terrorists. It would therefore be insane — to borrow a word favored by Shapiro — to suggest he has anything in common with the hate-filled bigots who are trying to kill him, right? It would be crazy to talk about a commentator who has said that Arabs “like to bomb crap and live in open sewage,” and has predicted that “the next race war will come not from racist whites, but from racist blacks and Hispanics” in the same breath as white nationalists and white supremacists. It would be mad to connect Shapiro — whose Twitter feed was visited by the Quebec City mosque shooter 93 times in the month leading up to the attack — with domestic terrorists.

Here are six other conservatives who have nothing whatsoever to do with white nationalism. Nothing, nada, zilch.

The fact that the host of one of the highest-rated shows on cable news went live on Monday evening, after the El Paso killings, to dismiss concerns about white nationalism as a “conspiracy theory” and a “hoax” doesn’t make him a white nationalist. Nor does the fact that he has claimed immigrants are making America “poorer and dirtier,” accused the Democrats of pushing for “demographic replacement” via a “flood of illegals,” and referred to an “invasion” of Europe by refugees who are “profoundly chang[ing] the demographics” of the continent.

Nor does the fact that neo-Nazis are fans of his show because “he is making the white nationalist talking points better than they have and they’re trying to get some tips on how to advance it.”

The president of the United States declared that “our nation must condemn racism, bigotry, and white supremacy” in a speech on Monday. So how can he be a white nationalist or supremacist? What evidence is there that the El Paso shooter has anything in common with Trump (aside from the fact that he and the president have both denounced an “invasion” of immigrants; both accused the Democratic Party of “treason”; both referred to the media as “fake news”; and both approved of the “send them back” message)?

What proof is there that the Christchurch terrorist in New Zealand took inspiration from the U.S. president (aside from his description of Trump as “a symbol of renewed white identity”), or that neo-Nazis approve of his policies (aside from the founder of the neo-Nazi website Stormfront saying “Trump is setting us free”)?

Remember: Trump is “the least racist person in the world.”

Stephen Miller, senior adviser to the president of the United States, is Jewish. So how can he be a white nationalist? The fact that his own uncle and rabbi have disavowed him because of his hard-line views on immigration shouldn’t bother us. The fact that he was friends with neo-Nazi leader Richard Spencer in college, or that Spencer has praised him as “highly competent,” shouldn’t concern us. The fact that he was one of the architects of the Trump administration’s Muslim ban, and the policies of reducing refugee admissions, halving legal immigration, and separating children from their parents at the border … doesn’t mean he has a problem with brown people.

Why would you think that?

Fox News host Laura Ingraham has told her viewers that Democrats “want to replace you, the American voters, with newly amnestied citizens and an ever-increasing number of chain migrants.” She told Texas Lt. Gov. Dan Patrick earlier this year that his state was “completely overrun by this illegal invasion” and “calling it anything but an invasion at this point is just not being honest with people.”

Replacement? Invasion? Why would that make you think she was a white nationalist?

Oh, and the fact that Ingraham was caught doing what looks like a Nazi salute at the Republican National Convention in 2016 is just pure coincidence.

Candace Owens, at the southern border, says "they want to import criminals" and a "new class of victim voters" pic.twitter.com/gjBhPC7T4T

Owens, in fact, is keen to disconnect nationalism (good) from white nationalism (bad). “If Hitler just wanted to make Germany great and have things run well — OK, fine,” she said, after she was asked about the word “nationalism” at an event in London. The problem, she explained, “is he had dreams outside of Germany. He wanted to globalize. He wanted everybody to be German.”

OK, fine. But apart from all that: Why would you think she’s on the far-right?

So what if the senior senator from Texas likes to cite Benito Mussolini? Who among us hasn’t quoted Il Duce?

So what if Cornyn, since Saturday’s massacre in his home state, has devoted more tweets and retweets to attacking the chair of the Congressional Hispanic Caucus than he has to attacking the white nationalist terrorist who perpetrated the killings?

So what if, only a few weeks ago, he tweeted out statistics suggesting Hispanics are “replacing” white people in Texas?

That doesn’t sound like anything a white nationalist would say, right?

Come on, let’s be fair to Republicans and conservatives. Let’s stop the conflation. Let’s not imagine, or invent, connections between them and the white nationalist far-right. It’s all in your head.