Despite a legal challenge, President Jair Bolsonaro seems determined to nominate his son Eduardo to be Brazil’s next ambassador to the United States. 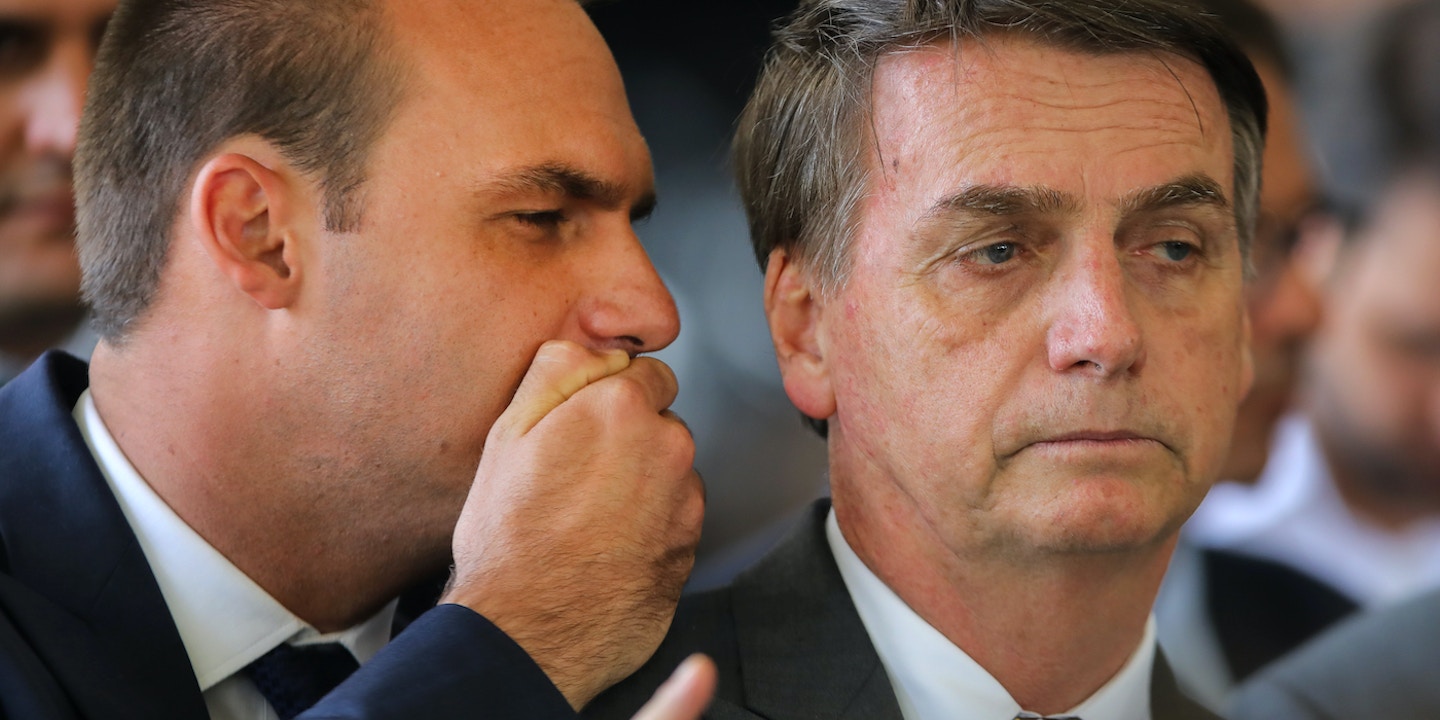 Prosecutors in Brazil have launched what looks like a last-ditch effort to block President Jair Bolsonaro from nominating his son Eduardo to be the country’s next ambassador to the United States.

The public prosecutor’s office in Brasília, the capital, argued in court papers filed Monday that the younger Bolsonaro, a 35-year-old congressman and close aide to his father, is not qualified to fill the country’s most prestigious diplomatic post, having never served his country abroad.

Before his election to Congress, the younger Bolsonaro had worked as a low-ranking federal police officer, and the only international experience listed on his resume is the year he spent on a work-exchange program in the U.S., which included a brief stint behind the counter at a Popeyes chicken restaurant in Maine. (Bolsonaro told reporters that he “friend hamburgers” there, but the chain only serves fried chicken and shrimp.)

Despite the court challenge, momentum for the likely nomination of the president’s son — a climate change denier who also happens to be a huge fan of Donald Trump — has been building in recent weeks. As his son met with Brazilian senators to win their support for his nomination last week, Jair Bolsonaro revealed that the Trump administration had promised in writing that it would welcome Eduardo’s appointment. The week before, the idea was publicly endorsed by Trump himself, who called the younger Bolsonaro “outstanding.”

Thanks for the kind words, Mr. President @realDonaldTrump . If I am entrusted with the mission of being the Ambassador of Brazil in the USA, I will certainly work very hard to promote agreements in all areas and to build a prosperous and longstanding Brazil-US relationship. pic.twitter.com/AZGyulTYlT

“I know his son, and that’s probably why they did it,” Trump said. “I don’t think it’s nepotism,” added the American president who gave his daughter Ivanka and son-in-law Jared Kushner White House jobs.

Indeed, the younger Bolsonaro’s ties to Trump and his family were clearly at the front of his father’s mind. “My son Eduardo speaks English,” Jair Bolsonaro told reporters last month, when he first floated the idea of nominating him for the post. “He’s friends with Donald Trump’s children.”

Eduardo Bolsonaro has carefully cultivated at least the image of being close to the Trump family: proudly displaying photographs of himself with Donald Trump Jr. and Jared Kushner during recent visits to the U.S.

Shot show is a place to meet important people.Thanks Royce Gracie for introducing me to Donald Trump Jr @DonaldJTrumpJr son of the US President.We had the opportunity to talk about our intentions for 2018 and also about the constant attacks that our families suffer from fake news pic.twitter.com/xBt1lL6BTI

After his father’s election, “03,” as Jair Bolsonaro refers to his third son, was also seen sporting a “Trump 2020″ cap in Washington.

Last month, Eduardo Bolsonaro even retweeted a Brazilian news site’s unsourced claim that Trump was actively considering his own son, Eric, for the post of U.S. ambassador to Brazil. The columnist Guilherme Amado later claimed that the rumor about Eric Trump was started by Filipe Martins, another Trump superfan among Jair Bolsonaro’s aides whose Twitter account is littered with white nationalist symbols and memes.

Eduardo’s apparent fealty to the Trump family, and the president’s shameless promotion of his son, led the Brazilian columnist Bernardo Mello Franco to argue last month that his nomination as Washington ambassador would “take Brazil closer to becoming a banana republic.”

In addition to the legal challenge, the nomination, which has to be approved by Brazil’s Senate, has prompted an outcry from critics of the far-right president, who accused him of failing to meet a campaign promise to promote meritocracy in government.

It has also unsettled diplomats in the Itamaraty, the headquarters of Brazil’s Ministry of Foreign Affairs. “The atmosphere,” inside the building, a diplomatic source told Le Monde last month, “is a mixture of panic and resignation.”

As my colleague Andrew Fishman has argued, many Brazilians object to the appointment because embracing Trump also means embracing policies that might be detrimental to Brazil.

The Bolsonaro brand of foreign policy — spearheaded by Eduardo — is to go out of their way to be subservient to Trump and endorse all of his ideas, even those Brazil previously opposed for not being in its best interest.

On social networks, the most frequently cited objection to the appointment is that it looks like a textbook example of nepotism: Jair Bolsonaro is picking one of his sons for a post previously reserved for seasoned diplomats. The Portuguese word “nepotismo” has appeared again and again in Twitter comments mocking the appointment, along with memes using the hashtag #EmbaixariaBrasileira — a play on words that mixes together the Portuguese for embassy, “embaixada” with the word “baixaria,” a slang term for something sordid thing, or a cheap trick.

Another Brazilian Portuguese word that appeared frequently in social media commentary, “mamata,” is a slang term for a type of corruption — derived from the verb “mamar,” to suckle, and used with disgust to describe public officials feeding from the government’s teat, which can be legal but is clearly unethical.

IF EDUARDO BOLSONARO WAS NAMED AN AMBASSADOR IT IS BECAUSE HE DESERVED! IS NOT NEPOTISM GUYS. YOU SHOULD BE HAPPY FOR HIM BECAUSE HE WAS NAMED AT HIS BIRTHDAY. @jairbolsonaro NICE PRESENT DADDY, YOU ARE A GOOD FATHER AND THE MAMATA WILL NEVER END #EmbaixariaBrasileira pic.twitter.com/bumBBfw1ms

“Performing mamata is the opposite of a participating in a ‘meritocracy,’ a much-loved concept for Bolsonaro’s supporters,” the analyst Marco Bastos explained last year. “In Bolsonarista circles, ‘meritocracy’ means that under equal conditions, those with the most ‘merit’ always achieve their objectives, be it getting into a top university or landing a good job.”

Critics of the appointment also mocked the notion that Eduardo Bolsonaro’s shaky command of English somehow qualified him to be Brazil’s ambassador to the United States. Video of him struggling to make sense in a recent interview with Lou Dobbs on Fox Business quickly went viral.

? THANKS ABOUT THE SPACE ? #EmbaixariaBrasileira

In another interview last month with “PBS NewsHour,” the prospective ambassador insisted that his father was right to say that one of his female critics “was not worth raping” because “she attacked first Jair Bolsonaro, telling that he is a hapist.” (In Portuguese, Brazilians pronounce the letter “r” at the start of words as an “h.”)

In response to the criticism, the president essentially admitted that the planned nomination was, at least in part, intended to benefit his son. “Of course he’s my child, I want to benefit my child, yes, I intend to,” Jair Bolsonaro said in a weekly Facebook Live broadcast last month. “If I can give my son a filet mignon, I will,” added. “But it has nothing to do with filet mignon this story here. Nothing at all. It is about, actually, that we deepen a relationship with a country that is the largest economic and military power in the world.”

Gustavo Bebianno, Bolsonaro’s ousted chief of staff, was particularly cutting in his appraisal, calling the nomination “a monstrous mistake.”

“Poor Eduardo doesn’t have the slightest clue,” Bebianno told the BBC’s Brazilian service last week. “He doesn’t even know the role of an ambassador. He has no idea. I worked closely with Eduardo, he doesn’t know basic notions of negotiation — he is a boy, a little boy, a surfer who was elected because of his father, then surfed his father’s wave again, winning a second term, but he is a completely inexperienced boy.”

As Oliver Stuenkel, a professor of International Relations at Fundação Getulio Vargas in São Paulo, observed on Twitter last week, Bolsonaro has also reacted to criticism of his son by “making only thinly veiled threats to senators that unless they approve his son’s nomination as Brazil’s Ambassador to Washington, he’ll make him Foreign Minister — which does not require the Senate’s approval.”

For months, reports have suggested that the current foreign minister, Ernesto Araújo, already holds a less important role in foreign policy than the president’s son. For instance, when his father visited the White House in March, it was Eduardo Bolsonaro, not Araújo, who was seated to the Brazilian president’s right during an Oval Office meeting with Trump. 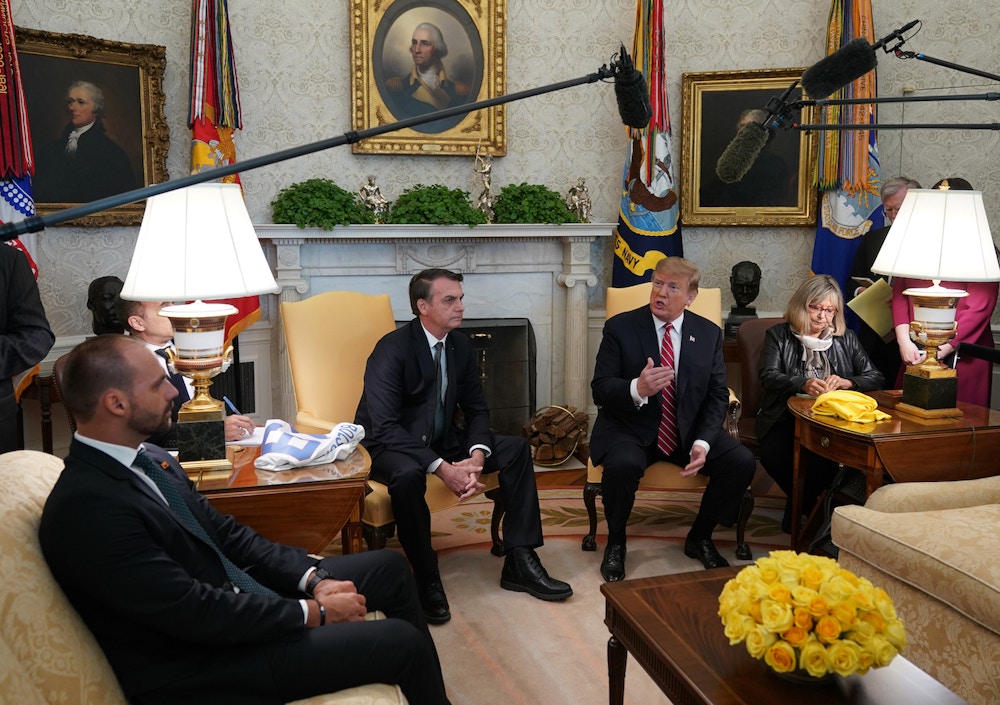 Eduardo Bolsonaro’s support for Trump also extends to praising the American president’s climate change denialism. In a YouTube video recorded during a winter trip to the United States last year, he saluted Trump for withdrawing from the Paris Agreement to combat global warming, casting aside the considerable damage unchecked warming is projected to cause in Brazil.

Standing in a snow-covered landscape, Bolsonaro cited climate change deniers to endorse the American president’s claim that the “theory” is nothing more than a hoax designed to restrain U.S. industry. The video’s idiosyncratic English subtitles also reinforce the sense that his command of the language is less than perfect.

One of the climate change deniers cited in Bolsonaro’s video, Olavo de Carvalho, is a conservative Brazilian writer known for expounding on a wide range of conspiracy theories in posts to YouTube, Facebook, and Twitter, uploaded from his home in Virginia.

Despite his extremely unconventional ideas — including claims that the Earth might be flat and that Pepsi is sweetened with the cells of aborted fetuses — Carvalho is treated as something of a guru by the Bolsonaro family. He was seated next to Jair Bolsonaro at a dinner during the leader’s visit to Washington this year. Asked by Folha de São Paulo, the Brazilian newspaper, if Brazil’s embassy in Washington would have a place for Carvalho, Eduardo Bolsonaro dodged the question but praised the conspiracy theorist.

The younger Bolsonaro is also a close ally of Steve Bannon, the American president’s former chief strategist who is now engaged in fostering right-wing nationalists around the globe. Last year, Eduardo boasted about meeting Bannon and promised that they would join forces to fight so-called cultural Marxism.

It was a pleasure to meet STEVE BANNON,strategist in Donald Trump's presidential campaign.We had a great conversation and we share the same worldview.He said be an enthusiast of Bolsonaro's campaign and we are certainly in touch to join forces,especially against cultural marxism. pic.twitter.com/ceHoui6FH5

In February, the younger Bolsonaro took a formal role in the former Breitbart chair’s organization, announcing in a press release that he was “very proud to join Steve Bannon as the leader of The Movement in Brazil, representing Latin American nations,” in Bannon’s collective of far-right nationalists. “We will work with him to reclaim sovereignty from progressive globalist elitist forces,” Bolsonaro added.

Updated: Friday, Aug. 16, 5:15 p.m. EDT
This article was revised to better describe the Portuguese-language word play involved in the trending hashtag #EmbaixariaBrasileira. Thanks to the reader who offered a more precise explanation of the pun and to my colleagues at The Intercept Brasil.