Aung San Suu Kyi, a 1991 Nobel Peace Prize laureate, is an essential part of the decimation of the Rohingya Muslims in Burma. She should face trial. 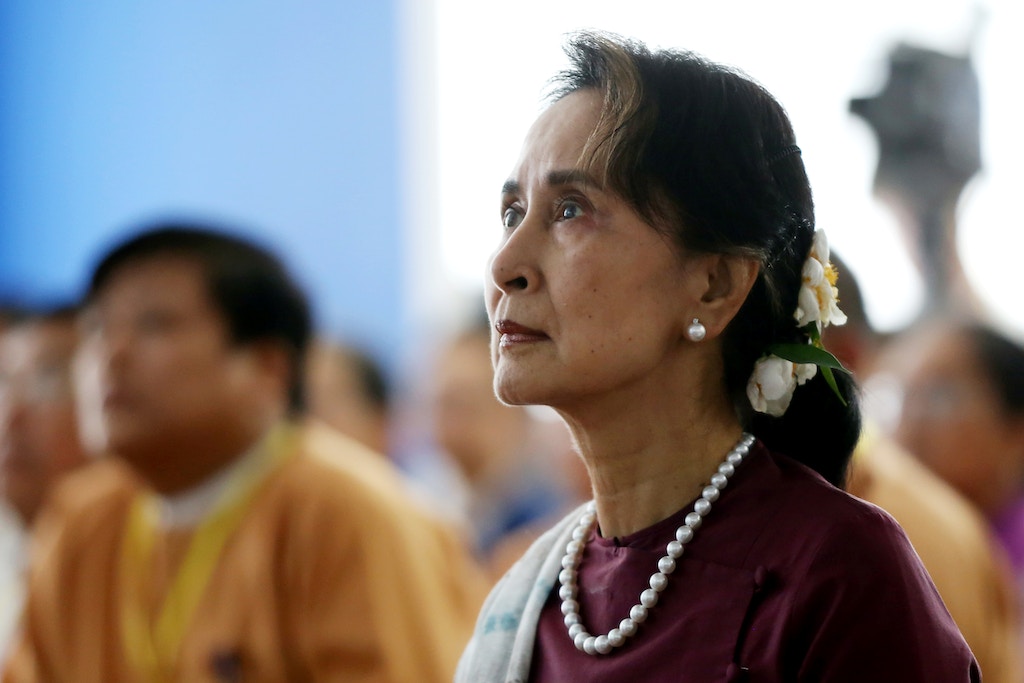 This Sunday marks two years since the Burmese military, the Tatmadaw, arrived in Rakhine state, in western Myanmar, to launch a renewed campaign of terror and violence against the country’s long-persecuted Rohingya Muslim minority. Unspeakable crimes were committed by Burmese troops and vigilantes: Rohingya men hacked to death; children burned alive; women and girls raped and sexually assaulted in their hundreds and thousands. Scores of villages were pillaged and razed to the ground as more than 700,000 Rohingya were driven from their homes. One cautious estimate put the death toll at more than 10,000.

Two years on, as Rohingya refugees languish in squalid camps across the border in Bangladesh, it is difficult to overstate the sheer barbarism they have had to endure. The U.S. State Department has called it “ethnic cleansing,” with Sam Brownback, the U.S. ambassador for international religious freedom, describing the violence against the Rohingya “as bad as or worse than any other I have personally seen — including as one of the first U.S. officials to visit Darfur in 2004.” In August 2018, a United Nations fact-finding commission accused the Burmese military of genocide — a view endorsed by, among others, experts at the U.S. Holocaust Memorial Museum in Washington, D.C., and a unanimous vote by the Canadian parliament in Ottawa. The U.N.’s investigators even demanded Myanmar’s top military commanders be investigated and prosecuted for the “gravest” crimes against civilians under international law.

But what about prosecuting Suu Kyi, the one-time darling of the West and hero to liberals and conservatives alike? When will that be in the cards? For the past two years, the former prisoner of conscience-turned-de facto head of state has blindly defended her country’s lawless military while cynically downplaying the extent of their brutal crimes. A long-standing Buddhist nationalist, Suu Kyi has also fanned the flames of hatred against the besieged Muslim minority in her country, repeatedly engaging in brazenly Islamophobic behavior. On a recent visit to Hungary, of all places, she joined with far-right Prime Minister Viktor Orban to bemoan the “continuously growing Muslim populations” in their respective countries.

She might want to enjoy her trips abroad, and meetings with fellow racist leaders, while she can. In February 2018, the U.N. special rapporteur on the situation of human rights in Myanmar, Yanghee Lee — who was banned from the country for criticizing the Suu Kyi government — was asked by British broadcaster Channel 4 News whether a criminal tribunal might one day find Suu Kyi guilty of crimes against humanity and even genocide. “I’m afraid so,” Lee replied, also stating, “She can’t be not accountable. Complicity is also part of accountability.”

The Burmese leader’s dwindling band of international defenders includes, shockingly, her fellow 1991 Nobel Peace Prize laureate Jose Ramos Horta, and U.S. Senate Majority Leader Mitch McConnell. They have joined with the Myanmar government to offer a range of bogus arguments as to why she cannot and should not be prosecuted  — or even be held responsible! — for the ongoing violence and repression in Myanmar.

First, they point out, Myanmar isn’t a signatory to the International Criminal Court, so the ICC has no jurisdiction. Yet in September 2018, in a stunning move, the ICC ruled that it could indeed prosecute Myanmar for crimes against the Rohingya people, accepting, as The Guardian reported, “a novel argument that even though the allegedly coercive acts that forced the Rohingya to flee took place in Myanmar, the crime would not have been completed until the refugees entered Bangladesh, which is a party to the Rome statute that governs the court.”

Second, say Suu Kyi defenders, as Myanmar’s first civilian leader after 49 years of military rule, she has no control over the armed forces. Therefore she cannot be held responsible for their brutal attacks on the Rohingya.

But this, says Maung Zarni, a fellow at the Genocide Documentation Center in Cambodia, “is a complete mischaracterization of Suu Kyi’s role” in those crimes. Zarni, a Burmese Buddhist who knows Suu Kyi personally and was once an ardent supporter of hers, points out that she controls four civilian ministries that have long been involved in repressing the Rohingya — the information, religious affairs, immigration, and foreign affairs ministries — not to mention her own high office of state counselor. The latter, as I noted in April 2017, “accused Rohingya women of fabricating stories of sexual violence and put the words ‘fake rape’ — in the form of a banner headline, no less — on its official website.”

It is fair, then, to damn Suu Kyi and her civilian officials for dismissing and denying the crimes against the Rohingya, thereby legitimizing and encouraging further violence by the security forces. Or, as the U.N. report put it, contributing “to the commission of atrocity crimes.”

As Zarni says, “There is no absolution of her responsibility for the official statements, bills, measures … all designed to deprive Rohingyas of access to education, health service, due process, livelihoods opportunities, factual information about Rohingya history, legal status, past citizenship activities and citizenship.” Suu Kyi, he told me bluntly, plays a similar role to that of Joseph Goebbels in Nazi Germany, “perhaps less blatantly, but no less effectively.”

Suu Kyi has “without a doubt played an important role in the genocide,” agrees Azeem Ibrahim, author of “The Rohingyas: Inside Myanmar’s Hidden Genocide,” by providing the Burmese generals with “cover at every step.” It was her presence at the top of government, as the Nobel Peace Prize-winning face of Myanmar to the world, which “emboldened and encouraged the military to undertake the final solution,” Ibrahim told me.

Third, the Suu Kyi apologists argue, any action taken against The Lady, as she is known, would upset the delicate balance of power inside of Myanmar and risk handing back power to the generals, maybe in the form of a military coup. McConnell calls Suu Kyi “the best hope for democratic reform in Burma,” while Ramos and others worry about risking a “fragile political transition.” However, as Ibrahim points out, this argument is “patently false.” The reality, he explains, “is that the military is now in the perfect situation: they have power without accountability. They have [Suu Kyi] taking all the criticism whilst they can get on with the genocide … and at the same time enrich themselves dramatically. Why would they want to upset that perfect set-up and return to power, inviting international sanctions and once again becoming a pariah state?”

Zarni is equally scathing. “This post-military Burma under Suu Kyi’s presumed enlightened rule is a complete fantasy that comes from self-interested diplomats and foreign governments,” he says.

So when will these foreign governments, which claim to care about human rights and make pious declarations of “never again,” take action to tackle the perpetrators of a modern-day genocide in Myanmar? There have been the mildest of travel bans imposed on a handful of Burmese generals but nothing whatsoever imposed against the state counselor herself. Suu Kyi has been stripped of various awards and freedoms from the likes of Amnesty International and the cities of Oxford, Edinburgh, and Paris, but do such minor humiliations really amount to justice for the Rohingya victims of “murder, rape, torture, sexual slavery, persecution and enslavement”?

To be clear: The refusal to sanction Suu Kyi, or consider prosecuting Myanmar’s de facto leader for her role in the Rohingya genocide, two years later, is not just an insult to the hundreds of thousands of Rohingya refugees waiting for some sort of accountability in Bangladesh and beyond. It endangers Myanmar’s other minorities, such as the Kachin Christians in the north, who have also been on the receiving end of Tatmadaw violence and terror in recent years.

As Ibrahim warns: “If you allow one genocide to go unpunished, you are opening the door to many others.”