The giant investment firm BlackRock has contributed to the climate crisis by investing in a Brazilian meatpacker, JBS, linked to Amazon deforestation. 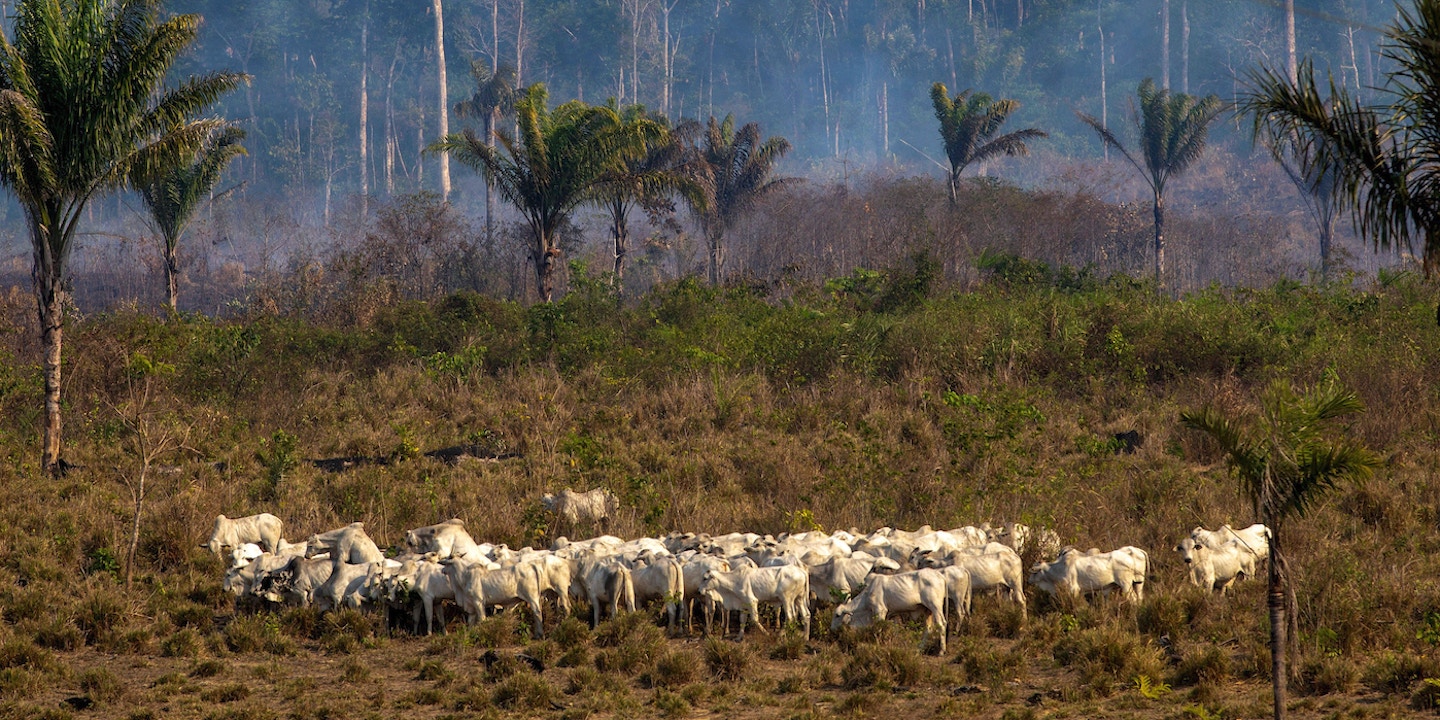 Larry Fink, the influential chief executive of BlackRock, which manages more than $6 trillion in investments, wants the public to know that he is using his enormous power to press companies to “serve a social purpose.” Fink — a Democratic donor who reportedly promised to help Joe Biden get elected president — wrote to businesses his firm invests in last year to urge them to consider their “impact on the environment” and the threat of climate change.

“Stakeholders are pushing companies to wade into sensitive social and political issues,” Fink wrote in a follow-up letter this year, “especially as they see governments failing to do so effectively.”

That desire to be seen as an ethical investor has not, however, stopped BlackRock from contributing to the climate crisis by providing significant financing to the world’s biggest meatpacker, JBS, which has been caught year after year buying cattle raised on illegally deforested Amazon land.

At least some of the thousands of fires burning huge swathes of the rainforest in Brazil, eroding a crucial safeguard against climate change, appear to have been started by cattle farmers. Cattle ranching is “the largest driver of deforestation in every Amazon country, accounting for 80 percent of current deforestation rates,” according to researchers at the Yale School of Forestry and Environmental Studies.

As Christopher Ingraham of the Washington Post reported this week, cattle ranchers in Brazil “have been pushing their herds into the Amazon, clear-cutting and burning the forest as they go” to meet the surging demand for beef exported by Brazilian agribusiness firms to mainly China, Iran, Egypt, Russia, and the United States.

About a third of that beef is exported by JBS, the spectacularly corrupt Brazilian meat-packing conglomerate BlackRock is heavily invested in. But even as Fink publicly urged business leaders to consider their environmental impact, BlackRock increased its stake in JBS by $41 million between 2016 and 2018, according to research conducted for Friends of the Earth.

The Bureau of Investigative Journalism, The Guardian, and Repórter Brasil revealed in February that a giant ranching company that was fined for using deforested Amazon land delivered hundreds of heads of cattle raised in the Amazon to other farms the firm owned for fattening. Cattle was later sent from those farms to slaughter at JBS plants.

It’s not just private American capital that is funding the destruction of the Amazon. Public money is at work, too. President Donald Trump has been compensating American farmers hurt by his trade war to the tune of billions of dollars, and $62 million of that has gone to JBS, because the company has an American subsidiary.

As Colorado’s Greeley Tribune reported in May, “JBS USA secured nine contracts for federal purchases of JBS pork since mid-January, totaling nearly 18.5 million pounds of pork for $40.1 million. That’s in addition to previously awarded contracts for nearly 9.8 million pounds of pork for $22.3 million. In total, the company, a subsidy of Brazil-based JBS SA, will receive $62.4 million from the program, which is meant to mitigate trade war impacts to local farmers.”

In 2016, Fink was angling to become treasury secretary under Hillary Clinton.Fink was on the short list to replace Tim Geithner as President Obama’s treasury secretary, and in 2013, hired Cheryl Mills, a close aide to Clinton, at BlackRock. Just ahead of the 2016 election, he was endorsed for the position by Steve Schwarzman, a top Republican donor and the co-founder and CEO of Blackstone. Sen. Elizabeth Warren, D-Mass., had promised to work to block any Clinton nominees from BlackRock.

BlackRock began as a fund inside of Blackstone, but Fink and Schwarzman had a falling out in the 1990s that led to a split. As The Intercept reported earlier this week, Blackstone is also heavily involved in deforestation of the Amazon, through its financing of highway and port projects that facilitate agribusiness.

According to a recent study by Amazon Watch, a nonprofit monitoring group, AgroSB, the JBS supplier, was fined in 2017 and 2018 by Brazil’s main environmental agency, known by its Portuguese acronym IBAMA. That agency has lost a quarter of its funding since January, when Brazilian President Jair Bolsonaro, a far-right former army captain, took office promising to roll back protection for the Amazon to boost agribusiness. Government data provided to Reuters by opposition lawmakers showed that the cuts to IBAMA’s budget included a 23 percent reduction in funding for the prevention and control of forest fires.

This summer, the New York Times reported, “Ibama was unable to carry out operations in the state of Pará, where deforestation has been soaring, because the local police officers would not provide backup.”

As the Amazon burns, Bolsonaro has mocked environmentalists for nicknaming him “Captain Chainsaw,” disputed data from Brazil’s National Institute for Space Research showing that deforestation in the Amazon was up 88 percent in June compared to the same month in 2018, promised “to develop this wonderful region called the Amazon,” and even promoted a conspiracy theory that local environmentalists, not ranchers, had started the fires there.

But while it is easy to recoil in horror from Bolsonaro’s pronouncements, huge numbers of Americans are, in fact, profiting from the burning of the Amazon under his watch, thanks to BlackRock’s decision to invest money from its pension funds and 401(k) retirement plans in JBS and other companies that contribute to deforestation.

As Amazon Watch reported this year, BlackRock is not alone. The 20 largest American and European investors in JBS “hold nearly 500 million shares in the company, valued at $2 billion. Within this set of companies, Capital Group, BlackRock, Fidelity Investments, and Vanguard hold the most significant equity investments in JBS.”

In a new report released on Friday, based on financial data from Profundo, a Dutch financial research firm, Amazon Watch and Friends of the Earth U.S. revealed that between 2014 and 2018 BlackRock increased its holdings in by more than half a billion dollars in “25 of the world’s largest publicly listed ‘deforestation-risk’ companies – companies active in producing and trading soy, beef, palm oil, pulp and paper, rubber and timber.”

Moira Birss, the finance campaign director of Amazon Watch, said that, while the vast majority of BlackRock’s deforestation-linked commodity holdings are made through index funds — passively managed funds that track the global marketplace — BlackRock could use its influence as the world’s largest investor to press those companies to make real changes. “BlackRock claims that its hands are tied by index funds,” Birss said in a statement. “It is wrong. BlackRock can follow the lead of other global asset managers and make change for the good of the rainforest, the climate, and of its customers by shifting investments out of companies wrecking the planet, and applying maximum pressure to change company behavior.”

The report also notes that BlackRock markets exchange-traded funds as “sustainable” which still include dozens of companies implicated in forest destruction, since the firm uses different standards to define that term in different markets and regions. Collectively across ten of these funds offered by BlackRock, Amazon Watch reports, these E.T.F.s include “over $423 million in fossil fuel companies and over $29 million in companies driving deforestation.”