An asylum officer with U.S. Citizenship and Immigration Services described being horrified by what the asylum interview process has become under Trump. 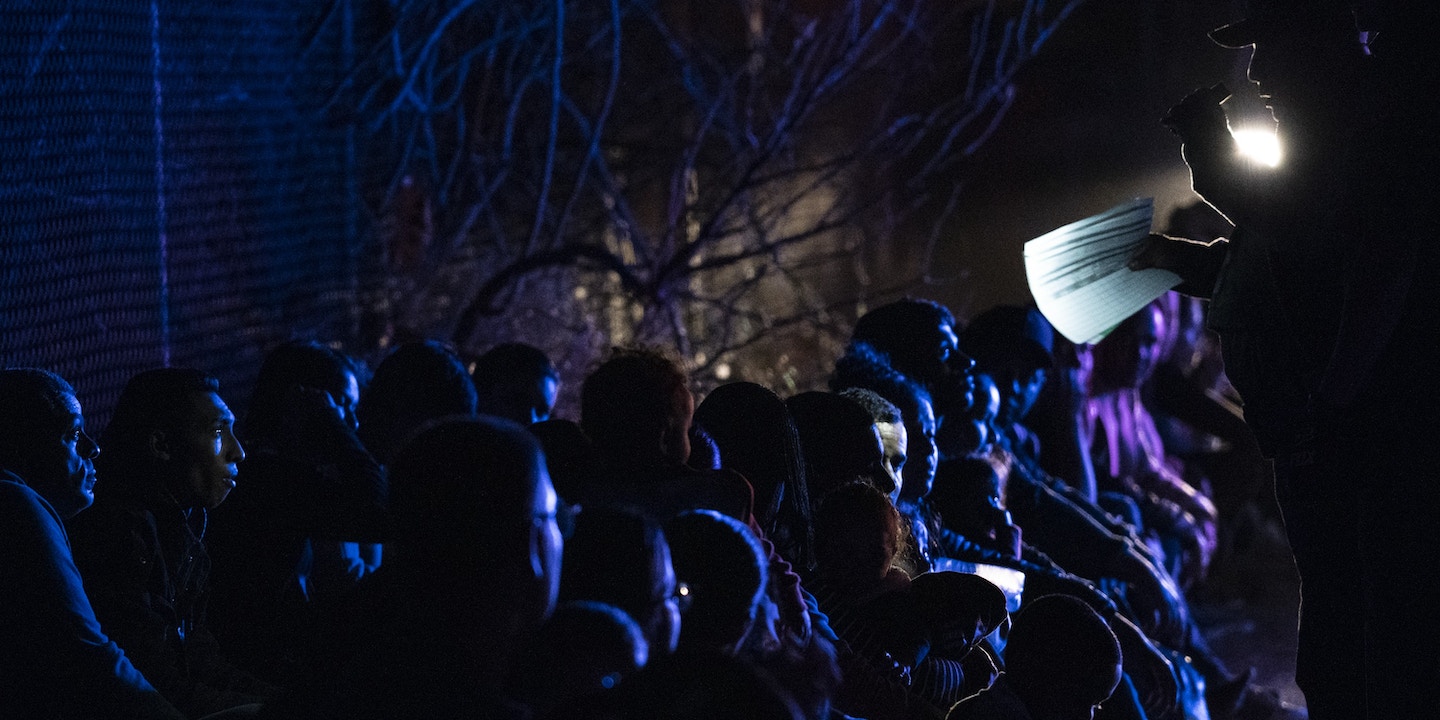 Asylum officers at U.S. Citizenship and Immigration Services, or USCIS, were reeling after John Lafferty, director of the asylum division, was replaced on Monday by Andrew Davidson, former deputy associate director for USCIS’s fraud detection and national security directorate. Then came the Supreme Court’s ruling Wednesday reinstating the Trump administration’s “third-country” rule, which effectively denies asylum to all Central American immigrants if they passed through another country on the way to the U.S. border with Mexico. It has been a very bad week for defenders of political asylum in the United States.

Lafferty had previously worked as a lawyer at Catholic Charities, an immigrant legal services nonprofit, and the asylum officers who worked under him at USCIS have generally had similar backgrounds. Many are highly educated attorneys who have worked in nonprofits assisting immigrants with asylum claims rather than trying to deport them. Lafferty’s ousting and replacement by a fraud investigator is just the latest development in the Trump administration’s assault on the asylum system, according to a USCIS asylum officer who contacted The Intercept. The asylum officer’s name is being withheld to protect against retaliation.

In recent months, Customs and Border Protection agents have been conducting asylum screening interviews in place of asylum and refugee officers from USCIS. These interviews have been taking place in detention centers in border states. Perhaps more ominously, they are also happening with immigrants trapped in Mexico by the so-called Migrant Protection Protocols, or MPP. Mexico is also where many immigrants will be dumped as the “third country” policy rolls out.

MPP forces asylum-seekers to live in dangerous Mexico border cities while awaiting intermittent court hearings in the U.S. As of this month, 42,000 men, women, and children are trapped in MPP. Many have been raped, robbed, and kidnapped in Mexico. They want desperately to escape the dangers they face, and many ask for what is called a “non-refoulement” interview so they can tell government officials about the violence they’ve suffered in Mexico, and their need to be removed from MPP and permitted to enter the U.S. Migrants have their documents checked by a Border Patrol agent after crossing the Rio Grande illegally outside of EL Paso, May 16, 2019.

Until recently, the officer said, such interviews were done exclusively by USCIS asylum officers, who undergo extensive, long-term training to conduct this kind of interview. Many are attorneys and have gone through at least 10 weeks of training. They are required to spend four hours a week on continuing education and legal policy and procedure. And even after training is completed, supervisors review the interviewers’ notes for mistakes and correct their findings if significant errors are found.

The asylum officer said that many of their colleagues and superiors have been troubled by new draconian requirements for MPP interviewees — requirements that have resulted in only about 5 percent of interviewed immigrants being removed from the program. The fact that someone has already been kidnapped or raped in Mexico is not enough for them to be removed from MPP. That is because passing the interview requires evidence not that the violence might happen again, but that it probably will reoccur.

The officer believes that MPP unconstitutionally deprives refugees of due process. That belief was the subject of an amicus brief filed by the officers’ union recently in the 9th Circuit, arguing that the government cannot force asylum officers to make illegal decisions. The officers have struggled to interpret MPP so that they can fulfill the spirit of the law: that people with legitimate claims deserve the chance to present their full claim before a judge.

The Intercept asked USCIS if asylum officers were being pressured by the Trump administration and the Department of Homeland Security to break the law. A spokesperson responded that that DHS policies and regulations such as for MPP and the third country rule “are carefully drafted and reviewed not only by agency counsel, but also by DHS counsel and DOJ to ensure legal sufficiency and compliance with existing immigration laws.”

But Customs and Border Protection officers who conduct the interviews have different training and a different agenda, the asylum officer said.

The officer said that CBP agents with no legal background are receiving as little as two weeks of training. As a result — or maybe deliberately — they commit errors. Migrants are asked questions by Border Patrol agents about their origins after having crossed into the U.S. near the Paso del Norte International Bridge, June 10, 2019.

The officer recalled an incorrect decision by a CBP agent. The agent finished the interview and wrote a report. Reading it, a USCIS asylum officer who had been sitting in noticed that the CBP agent had neglected to classify the immigrant as a member of an oppressed group in their home country. That is clear grounds for an asylum claim, and the USCIS employee’s interview notes clearly identified the immigrant as a member of that group. The CBP officer’s report did not. Whether the omission “was on purpose or by accident, we can’t know,” the asylum officer said. “But it’s not a good sign.”

The officer suspects malfeasance, however, because “CBP officers routinely fake paperwork. Several times a week I would speak to someone whose interview notes with CBP were wildly inaccurate, either intentionally or unintentionally.”

For example, the officer described speaking with many immigrants who, according to CBP, had signed a sworn affidavit saying they were not afraid to return to their country — yet the immigrants denied ever having been asked the question.

“The most obvious fake thing I see on paperwork these days,” the officer added, “is ‘Subject claims to fluently speak Spanish.’” In fact, the officer said, “They know 10 words of Spanish because they’re from the mountains of Guatemala and only speak an obscure Mayan language.”

CBP now has at least 75 officers who can do the MPP non-refoulement interview, the asylum officer said, and these days border agents are doing many, if not most, of the interviews. Almost everyone interviewed receives a negative determination and is sent back to Mexico. “I think their end goal,” the asylum officer said of the Trump administration, “is to have all CBP stations have CBP officers do these interviews because then they are no longer being kicked up to us. CBP hates sending stuff to us. Our positive rates are very high and CBP hates that.”

The Intercept asked CBP to respond to the officer’s claims that its agents make mistakes, possibly deliberately. A CBP spokesperson did not respond to that question but stated that “in addition to the training that is received at the Border Patrol Academy, Border Patrol Agents in the Pilot Program receive 5 weeks of training under U.S. Citizenship and Immigration Services lesson plans to conduct Credible Fear interviews.”

The asylum officer is also troubled that no attorneys are allowed to accompany immigrants to MPP interviews; the immigrants need attorneys. “These people are extremely confused. There’s all sorts of reasons why someone wouldn’t be able to tell you what happened to them, where an attorney is able to find out, if nothing else because they have more than the 30 to 60 minutes we have to do an interview.”

For now, USCIS supervisors are still reviewing MPP decisions, including those done by CBP agents, but the asylum officer is concerned that even that safeguard could be eliminated. When asylum and refugee officers do other types of interviews, they are required to write substantial narratives justifying their findings. That does not happen with MPP. “The scary part is that the officer doesn’t have to justify their decision. They just check a ‘yes’ or a ‘no.’ So you can’t know what the quality of their analysis was.”

As for the new third country policy, interviewers — whether they are asylum officers or CBP agents — are being ordered to automatically disqualify all immigrants except for those who show that they were trafficked or were denied asylum in other countries, or can prove that they are more likely than not to be persecuted or tortured in their home country. The bar is extremely high, and for anyone who does pass the interview, the asylum officer said, the government “can always return them to Mexico under MPP. It’s a supervillain plan.”

The government’s goal now is to turn everyone away, the officer said. That will empty currently crowded detention centers to make room for immigrants who have been picked up in the U.S. interior rather than at the border.

The officer described feeling horrified, even physically sickened, by these new policies under Trump, and by what the asylum interview process has become. Still, USCIS officers are trying to do their interviews comprehensively and correctly. For instance, the officer said, it’s important to ask immigrants if they were trafficked or if they were compelled to have sex with their smugglers, or were otherwise forced to remain with or work for smugglers who demanded higher fees than were previously agreed upon. These are common instances of trafficking. Yet the officer already knows of one case where a CBP agent paid no attention to a girl who repeatedly described being trafficked.

The officer could leave USCIS and get another job, but stays on. “I’m doing harm reduction with my own government. It’s insane. The alternative is, who’s going to come in and take my place?”

This article has been updated with a statement from Customs and Border Protection that was received after publication.