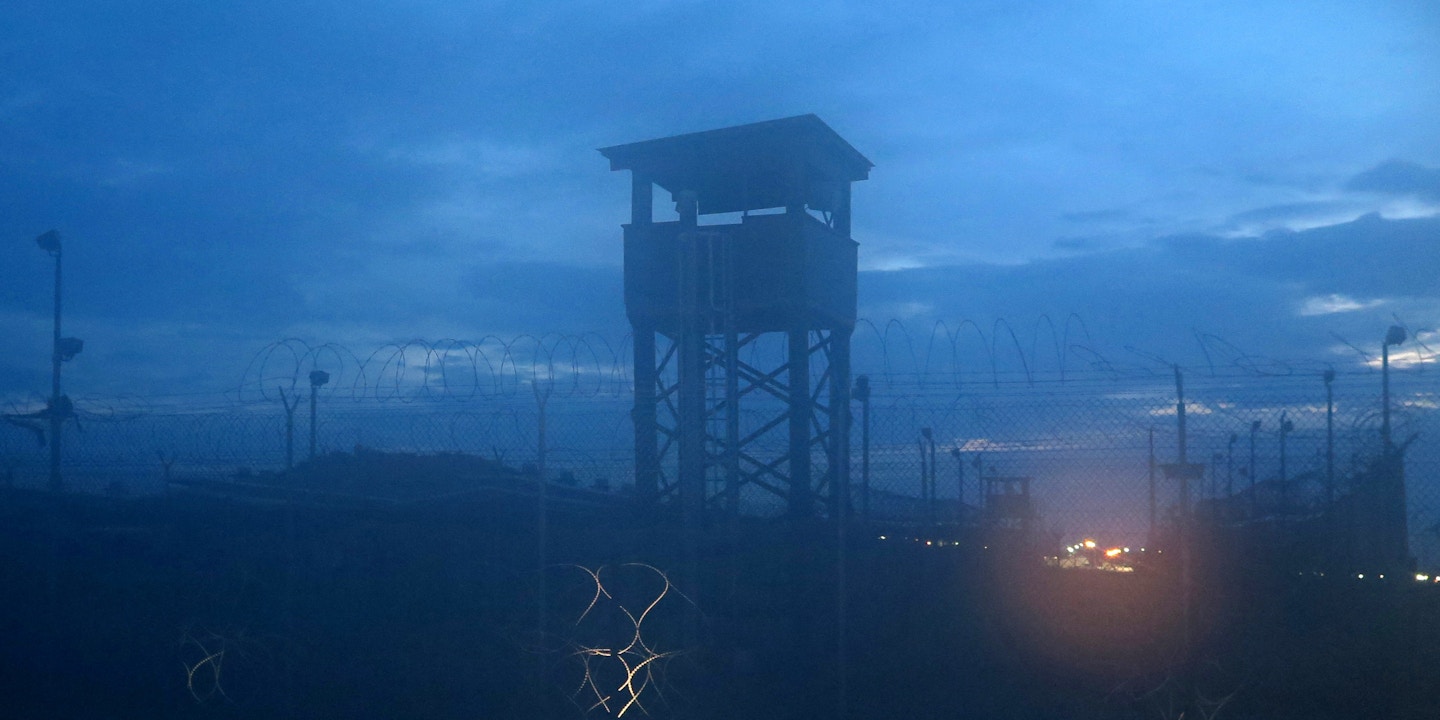 “If you fail to plan, you plan to fail.” So begins Naval Station Guantánamo Bay’s hurricane preparedness guide, which it circulates to the military officers and dependents stationed at the base. The quip, a quote attributed to Ben Franklin, smacks of irony given the current U.S. administration’s approach to climate change — to deny it exists and certainly not to plan for the havoc it will inevitably wreak.

But plan Guantánamo must, not only because the base is a crucial hub for what the U.S. Southern Command considers “hemispheric security,” but because of its notorious prison that holds the 40 forever detainees of the war on terror. And while President Donald Trump has promised to keep the prison open and even bring in new detainees, the base at Guantánamo finds itself in a geographic region particularly vulnerable to the very climate crisis the Trump administration refutes. Whether they acknowledge it or not, military commanders thus face a conundrum: spend enormous amounts of money to revamp the deteriorating detention camp to make it hurricane-proof, or put detainees lives in danger. The military has proposed a series of improvements to the base, some of which would address the threat of storms, but for the most part, work has proceeded piecemeal.

As extensive research demonstrates, human-caused climate change is “supercharging” hurricanes in the Caribbean basin and “exacerbating the risk of major damage” from the storms. In recent weeks, Hurricane Dorian’s 185 miles-per-hour winds razed parts of the Bahamas — less than 250 miles north of Guantánamo.

Though Dorian skirted the base’s location in eastern Cuba, Guantánamo has endured hurricanes in the past. In 2017, Hurricane Irma made landfall there. The Category 5 storm was at that time the strongest hurricane ever observed in the open Atlantic Ocean. None of the detainees imprisoned at the base were evacuated, despite the former head of the U.S. Southern Command and White House chief of staff John Kelly’s 2014 statement to Congress that “numerous facilities are showing signs of deterioration and require frequent repair.” Kelly highlighted Camp 7, the secretive prison where the military holds its “high-value” detainees, including accused 9/11 architect Khalid Sheik Mohammed. “[T]he High Value Detention Facility is increasingly unsustainable due to drainage and foundation issues,” Kelly told Congress as part of a failed bid to construct a new $49 million facility. Though no detainees were relocated during Irma, those held at Camp 7 were moved to a more secure location when Hurricane Mathew struck in 2016.

Since Trump’s January 2018 executive order to maintain the prison at Guantánamo, the question of infrastructural shortcomings has reemerged. The detention mission at the base changed from “expeditionary” to “enduring” as a result of Trump’s order. Consequently, Joint Task Force Guantánamo, or JTF GTMO, was under a new imperative to plan for the future – a future comprised of an aging and increasingly ill detainee population, some of whom are already experiencing the physical and psychological effects of torture, detainment, and growing old at the base. In light of the current administration’s position, commanders received orders last year to plan for another 25 years of detention at Guantánamo. As journalist Carol Rosenberg reported for the New York Times, JTF is effectively planning for detainees to “grow old and die” there. Rosenberg wrote in April that then-JTF Commander Rear Adm. John C. Ring envisioned a “communal nursing home-style and hospice care confinement” facility.

Prior to his dismissal at approximately the same time as Rosenberg’s report, Ring was a leading proponent of the establishment of Camp 8, a proposed $69 million detention camp to hold the alleged 9/11 plotters and other “high-value” detainees. Camp 8 would have been constructed to withstand a Category 3 hurricane (despite the Category 4 and 5 storms of recent years), but Congress ultimately refused to fund it. Asked how it intends to navigate climate change-related extreme weather, a JTF spokesperson told The Intercept, “We do not discuss our plans or operations, but reaffirm our commitment to safe, humane, and legal detention of law of armed conflict detainees. Our Warfighters constantly train for multiple contingencies including destructive weather, and the safety of detainees is a priority for the Joint Task Force.” Though Congress declined to upgrade detainee facilities, those “Warfighters” now take their meals at a $12 million hurricane-proof dining room and kitchen that opened in summer 2018.

Moazzam Begg remembers “praying that there was some kind of hurricane and it hits this place because that would be some kind of way out.”

The JTF and the U.S. Southern Command did not provide information on contingency planning for ailing detainees in the event of extreme weather, but the impacts of storms are palpable for the men held at Guantánamo. Indeed, the hurricanes themselves are a form of punishment for detainees, one that former Guantánamo prisoner Moazzam Begg still remembers vividly some 14 years after his release.

In a phone interview with The Intercept, Begg recounted his imprisonment during the hurricane season of 2004. At the time, he had been in maximum-security solitary confinement for close to two years. He was allotted just 15 minutes outside of his cell approximately every three days, an all too brief reprieve he was denied when the hurricane hit. No one informed Begg of the circumstances, but he recalled a booming wind that rattled the roof of his cell, and officers “bolting and strapping things down, trying to make sure the guards were fully briefed in the case of any event that might cause the facility to be damaged and the possibility of our escape.” Begg, who was never charged with a crime, described “praying that there was some kind of hurricane and it hits this place because that would be some kind of way out.”

Pakistani national Ahmed Rabbani described a similar sentiment in a conversation with his attorney in fall of 2018, as the hurricane season began. In a statement that the human rights organization Reprieve provided The Intercept, Rabbani told his attorney Clive Stafford-Smith, “We are surrounded by a dark ocean, hurricanes each season, stormy seas of the Caribbean triangle, where everything disappears.” Rabbani, like the 39 other men still detained at the base, finds his fate caught in the crosshairs of the never-ending war on terror and the capriciousness of the Caribbean climate. “We hear only the sounds of shackles,” he told Stafford-Smith. “The sound is echoing around, overcoming even the sound of the seas.”