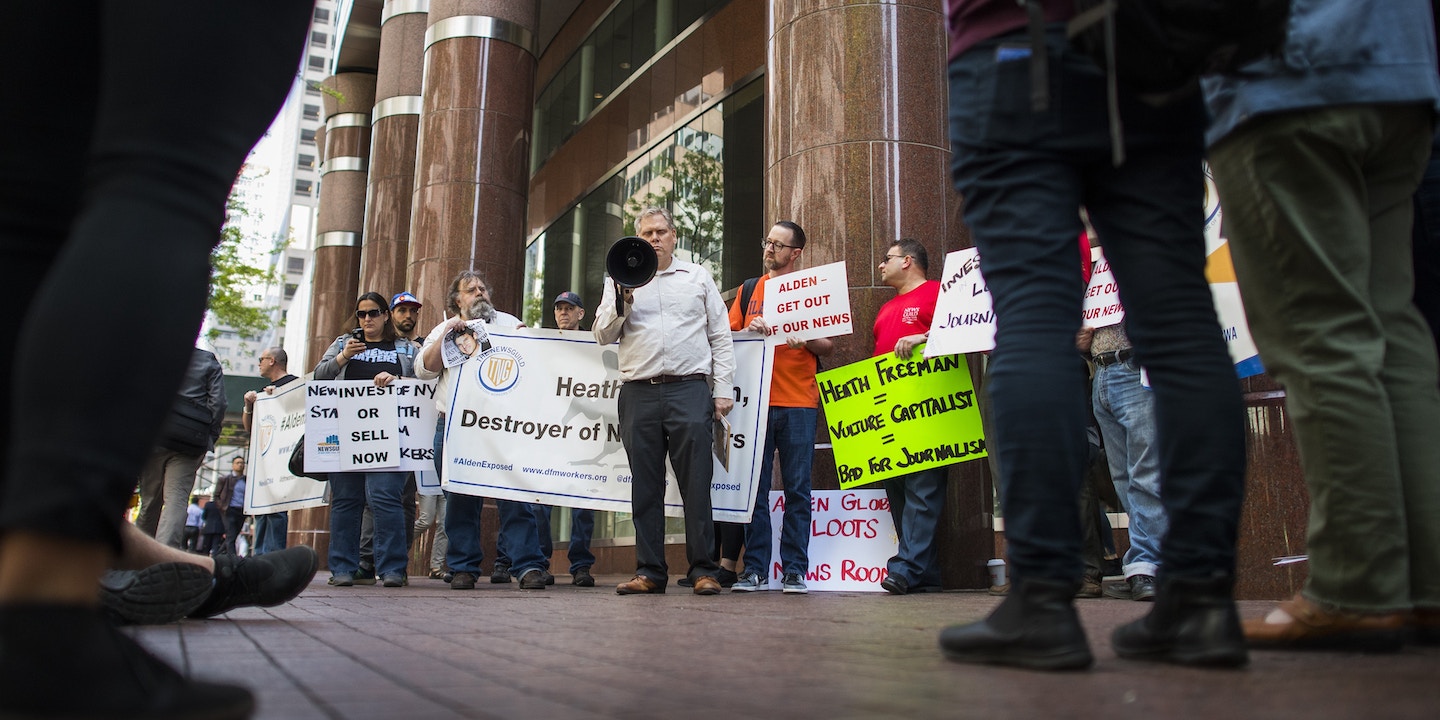 Investigative journalist Thomas Peele remembers the day he learned that he and fellow reporters at the East Bay Times and the San Jose Mercury News won the Pulitzer Prize for their “relentless” coverage of the deadly Ghost Ship warehouse fire in Oakland, California.

Peele was stunned and, of course, elated that he and his team would be honored for their dogged work covering a tragedy that shook their region.

It was April 2017. One week later, MediaNews Group, owner of the two papers and scores of others around the country, announced plans to move the Bay Area’s copy desk work to Southern California, triggering 20 layoffs from a shrunken roster of fewer than 100 employees in the East Bay newsroom.

In a flash, almost a quarter of the award-winning editorial staff was gone.

“It was a kick in the teeth,” said Peele, who is an officer for the NewsGuild, the union that represents workers at the papers.

The chain’s owners and executives, he said, “didn’t even send a pizza.” But they did send layoff notices, along with “word that our papers would be edited 400 miles away by people we had no relationship with, and who had little knowledge about our region of the state. And we were basically told some stories wouldn’t be copy edited at all.”

“Pulitzer?” he asked. “What Pulitzer?’

It was all part of a growing trend of shifting tasks such as proofreading, copy editing, and page design to “hubs” that would save money. Meanwhile, the papers were profitable, not to mention Pulitzer-winning — but the hedge fund that owned their parent company wanted to skim more off the top.

Now it’s outsourcing California news design to the Philippines, paying pennies on the dollar for work that once employed professionals who lived in the communities they served.

An employee in the production department of the design hub, who asked not to be named because of fears he’d be laid off, said Digital First once assured workers that the hubs were key to helping the papers survive. By his count, just before the Philippines contract went into effect in May, the company cut its Southern California design and copy editing pool by a half-dozen people — all on the heels of 65 layoffs across the company’s Southern California newspapers a year earlier.

“They said it was to save money,” he said. “So once we heard everything was being outsourced, we were confused, because we were supposed to be that.”

At the Denver Post, the company is pushing the envelope even further. In bargaining talks with union leaders this summer, Digital First pushed for the right to use artificial intelligence to cover high school sports. They also hope to allow computers to “gather and publish” municipal government news, including “local news stories from suburban communities, school districts and other governmental districts,” according to a company proposal obtained by The Intercept. Denver Post union official Tony Mulligan said the company has already selected a vendor and budgeted money for the prep sports transition.

Of course, artificial intelligence and data mining don’t automatically lead to job loss, and they can be useful tools in the hands of skilled journalists, said Ken Doctor, a media analyst with Nieman Lab.

“The problem is the tools are being used by those who are primarily looking at cost-cutting,” he said. “Actual journalism requires judgment.”

In the midst of this unending budget slashing, Digital First papers are making plenty of money. They netted profits of $159 million in fiscal year 2017, according to Doctor. In fact, Digital First may be the most profitable daily newspaper chain in the industry, earning an average 17 percent annual profit margin in a field where 7 or 8 percent is considered viable. Some of its papers have earned as much as 30 percent, Doctor reported.

In press releases and statements filed with the Securities and Exchange Commission this year, Digital First confirmed its “increased profitability,” which it said grew from 11.6 percent to 16.2 percent between fiscal years 2015 and 2018.

Since 2012, when the privately held firm took control of the chain’s hundreds of dailies and weeklies, Alden has treated them like a personal ATM, admitting in court documents that it siphoned hundreds of millions in cash from local papers across the country to gamble on unrelated businesses — many losing propositions — such the Fred’s Pharmacy chain, which on September 9 declared bankruptcy and announced that it was liquidating all its stores and assets. Other court filings show that it invested in Payless ShoeSource, which this year shuttered its more than 2,000 stores.

Under Alden’s stewardship, those companies have shuttered thousands of stores, eliminating a combined 22,000 jobs, while Alden executives and associates took in six-figure compensation packages.

This is a typical strategy for what are known as vulture funds, which push these companies into bankruptcy, preferring to make their money by selling off assets like real estate, extracting maximum profits by slashing payrolls, paying themselves handsomely by serving on the company’s boards, and charging a 2 percent management fee (which, in Alden’s case, adds up to $20 million a year).

I’ve seen firsthand what Alden can do to a company. I worked for one of its papers, the Monterey Herald, until 2015. (I now freelance as a reporter and editor for various media outlets, including websites published by the NewsGuild, the union that represents workers at 13 Digital First newspapers.)

At the Herald, it was bad enough when the hot water heater broke and never got fixed. Then employees had to put plants under the leaky roof to keep the break room from flooding. Then the presses were shut down, the building sold, and we moved into smaller rented digs.

But at least we had an office.

In 2013, Alden quietly set up a mysterious firm called Twenty Lake Holdings to sell off its newspapers’ real estate, which often includes historic buildings in prime downtown locations. In towns from Longmont, Colorado, to Pottstown, Pennsylvania, Alden has closed Digital First offices entirely, forcing reporters to work from other papers’ buildings, printing plants miles from the towns they cover — or from their homes, cars or coffee shops.

Bill Ross, executive director of the NewsGuild of Greater Philadelphia, said that in his region, three Pennsylvania newspapers have closed their offices — in Pottstown, Norristown, and West Chester. These are the papers that, according to Doctor, are earning that stunning 30 percent profit margin.

Evan Brandt, a veteran reporter at the Pottstown Mercury, now works in his attic, “up here with the Christmas decorations.”

Brandt said the biggest challenge is getting breaking news to his community. “The cops reporter doesn’t live in town, so that’s 20 minutes away.”

In Monrovia, 20 miles northeast of Los Angeles, a Digital First production hub of 33 full-time and three freelance employees puts together 12 daily papers that include the L.A. Daily News, the Orange County Register, the San Jose Mercury News, and a swath of smaller California papers, along with dozens of weekly papers.

But now, even that consolidation effort is apparently not saving enough. Since May, Alden has been shifting design work to the Philippines. Through an outsourcing company called AffinityX, more than 40 California weekly newspapers once designed in Monrovia are now produced in Manila.

In an August 23 email to staff, Digital First’s Southern California News Group managing editor Helayne Perry wrote that “AffinityX has taken over the design of our opinion pages.” There are “rumblings” that page two and local news sections will likely be next, the Monrovia design hub employee said.

The employment website Glassdoor estimates that AffinityX pays around 18,000 Philippine pesos ($350) a month to designers in its Manila shop. While unverified, that does appear to be the going rate in the region. Pay at AffinityX’s design shop in Pune, India, is even lower, with annual salaries of 191,800 Indian rupees (around $2,700), according to Glassdoor.

The Nieman Lab’s Doctor said news companies have been sending advertising design offshore “for 10 to 15 years now. Everybody was doing it.” And while some companies tested offshoring news design a few years ago, he said this is the first instance he’s aware of a news chain actually doing it.

“With all the regionalization of editing and design, from a cost point of view, it’s a next logical step. It doesn’t surprise me,” he said. “It’s classic offshoring. You just keeping moving to make things cheaper and cheaper. Many of these companies have long ago given shorter shrift to the impact on product quality and journalism quality.”

Or, as the design hub employee put it, “Once they realize how much they’ll be saving, where does it end?” 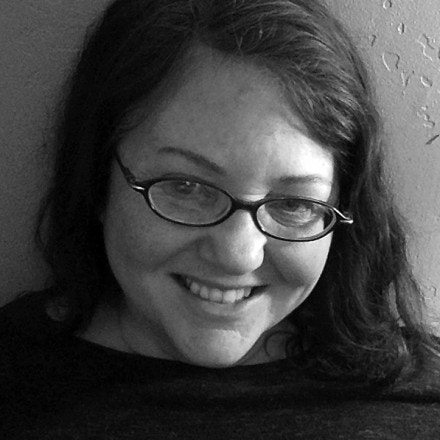