How to end U.S. military commitments without repeating Trump’s calamitous withdrawal would be an obvious question for Tuesday night’s Democratic debate. 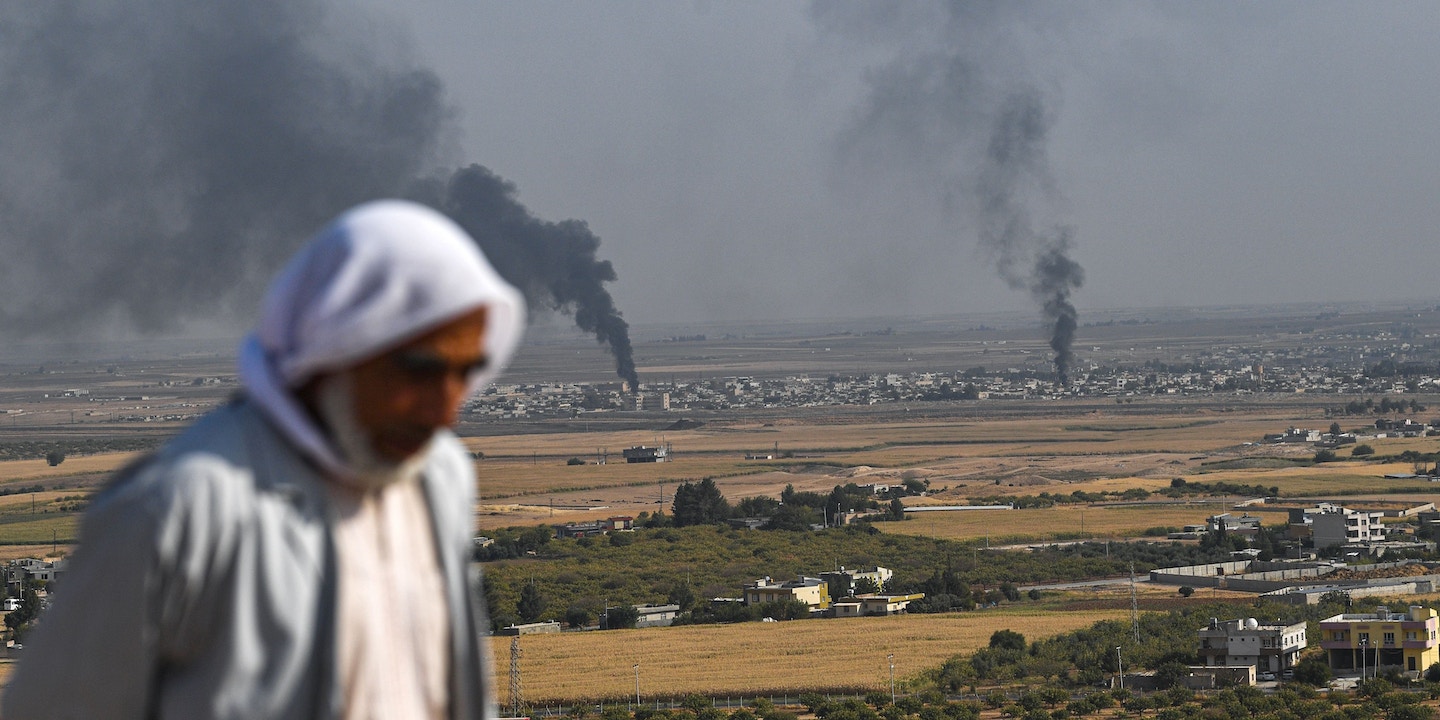 The Pentagon announced on Monday that the U.S. was pulling all of its troops out of northeastern Syria at President Donald Trump’s direction, completing a withdrawal he had started by Twitter declaration a week earlier. The move further clears the way for a full-on invasion by Turkey, whose soldiers have already been accused of executing noncombatants. In the chaos, hundreds of Islamic State detainees have reportedly escaped.

Trump defended his decision in a series of early-morning tweets on Monday. “The same people who got us into the Middle East mess are the people who most want to stay there!” he wrote. “Never ending wars will end!”

Trump’s abandonment of eastern Syria and the U.S. military’s Kurdish allies has put progressive Democrats — many of whom also favor withdrawing from overseas military operations — in a delicate spot. Over the past week, they have been trying to thread the needle between condemning Trump for recklessly abandoning an ally and emphasizing that withdrawing U.S. troops should be an eventual policy goal.

Trump’s decision has showcased what a worst-case scenario for expedited military withdrawal could look like, making it harder for progressive Democratic presidential candidates like Sens. Bernie Sanders and Elizabeth Warren to press their cases against “endless wars” on the campaign trail. The question of how progressives can go about drawing down U.S. military commitments without repeating Trump’s calamitous actions would be an obvious pick for Tuesday night’s Democratic debate.

So far, the Democratic candidates have been critical of Trump but light on specifics about what they would do differently. Last week, Sanders condemned Trump’s withdrawal from Syria, telling reporters that “as somebody who does not want to see American troops bogged down in countries all over the world — you don’t turn your back on allies who have fought and died alongside American troops. You just don’t do that.” But when George Stephanopoulos asked Sunday morning on ABC for Sanders to explain the difference between his and Trump’s approaches, Sanders responded simply that Trump “lies. I don’t.”

Warren’s response was similarly vague. She tweeted that “Trump recklessly betrayed our Kurdish partners” and that “we should bring our troops home, but we need to do so in a way that respects our security.”

Ro Khanna, a Democratic representative from California and co-chair of Sanders’s 2020 campaign, told The Intercept that progressives urgently need to make the case for a “doctrine of responsible withdrawal.”

“I don’t believe that withdrawal from a progressive perspective means a moral indifference to the lives of the places that we leave,” Khanna said in a phone interview. “It’s not an ‘America First’ approach that says our interests and our American lives are the only things that have moral worth. Rather, our withdrawal is based on an understanding of the limitations of American power to shape and restructure societies. It emphasizes the need for effective diplomacy and understands our moral obligations in these places.”

The U.S. should not have withdrawn troops without negotiating a deal that would have kept Turkey from invading Syria, backed by a threat to withhold future arms sales and economic assistance, Khanna told The Intercept. “We could have used all those points of leverage to get their commitment that they wouldn’t slaughter the Kurds.”

Another key difference between Trump’s approach and that of progressives is their level of trust for civil service expertise, Khanna said. “What this shows is that it’s not enough to have a president with certain instincts. Foreign policy requires great expertise. You need a progressive president who understands the importance of military restraint, but who also has the ability to put together an extraordinary foreign policy team to implement the goals that they may have.”

Far from admiring Trump’s approach to Syria, many anti-interventionists and foreign policy experts in D.C. view it as a blueprint for how not to withdraw from a conflict, according to Adam Wunische, a researcher with the Quincy Institute, a new pro-diplomacy, noninterventionist, and nonpartisan think tank.

“What we should have been doing from the very beginning is once we achieved the limited objective of destroying ISIS territory, they should have immediately begun contemplating what kind of peace or settlement could come afterwards,” Wunische told The Intercept. “To my knowledge, the U.S. is one of the only actors that can effectively talk to both the Turks and the Kurds. So they should have been trying to find an acceptable political arrangement for all the parties involved that doesn’t involve an endless, ill-defined military presence for the U.S.”

The Quincy Institute is working on a report outlining a possible plan for U.S. military withdrawal from Afghanistan that would avoid the type of disorder on display in northeastern Syria, Wunische said, though the timing of the report remains unclear.

Throughout the 2020 Democratic primary campaign, a number of candidates have railed against “endless wars.” But in a conversation that has been defined by intricate domestic policy proposals and detailed outlines of how to structure a wealth tax, candidates have said little about the rest of the world and even less about how they would wind down overseas conflicts.

Sanders, for example, has called for a withdrawal of U.S. forces from Afghanistan “as expeditiously as possible.” Warren has said “it’s long past time to bring our troops home, and I would begin to do so immediately.” Joe Biden has said he would bring “American combat troops in Afghanistan home during my first term,” but left the door open for a “residual U.S. military presence” that would be “focused on counterterrorism operations.” When asked during a July debate whether he would withdraw from Afghanistan during the first year of his presidency, Pete Buttigieg, the South Bend mayor and Navy Reserve veteran who spent seven months in Afghanistan, answered emphatically in the affirmative.

But aside from seeking a diplomatic solution, candidates have said very little about their policies for ending the war. And as in Syria, stakes for U.S. allies in Afghanistan are high.

A January study by the Rand Corporation found that a “precipitous U.S. withdrawal from Afghanistan” would have far-reaching consequences. The legitimacy for the U.S.-backed Kabul government would plummet, the report argued, and the Taliban would extend its control and influence. People all across the country would turn to regional militias and rival warlords for basic security.

“I don’t think that anyone, whether they promise it or not, is going to get out of Afghanistan in a week,” said Wuinsche. “What we need to focus on is, what is the political solution that we think is possible, and how do we get there? That requires marshaling all of these different tools of foreign policy, not just the military.”

Kate Kizer, policy director for the D.C.-based advocacy group Win Without War, stressed that one of the most revealing differences between progressives and Trump is how they would treat a conflict’s refugees. Under Trump, the U.S. has accepted historically low numbers of refugees and closed the door on future Syrian immigrants applying for Temporary Protected Status.

“One of the cruelest parts of Trump’s policy is the fact that, in addition to fueling more bloodshed with this decision, he’s also banning any types of civilians who would be fleeing from the conflict,” Kizer said. “In a situation like Syria and even Afghanistan, there’s a way to responsibly withdraw and then there’s a way to cut and run, which is what Trump has shown he has a predilection for. But I’m not sitting here saying that any type of military withdraw will necessarily be bloodless.”