“You did a hell of a job at your job,” Biden told Sen. Elizabeth Warren, in a remark that couldn’t have been more patronizing if he tried. 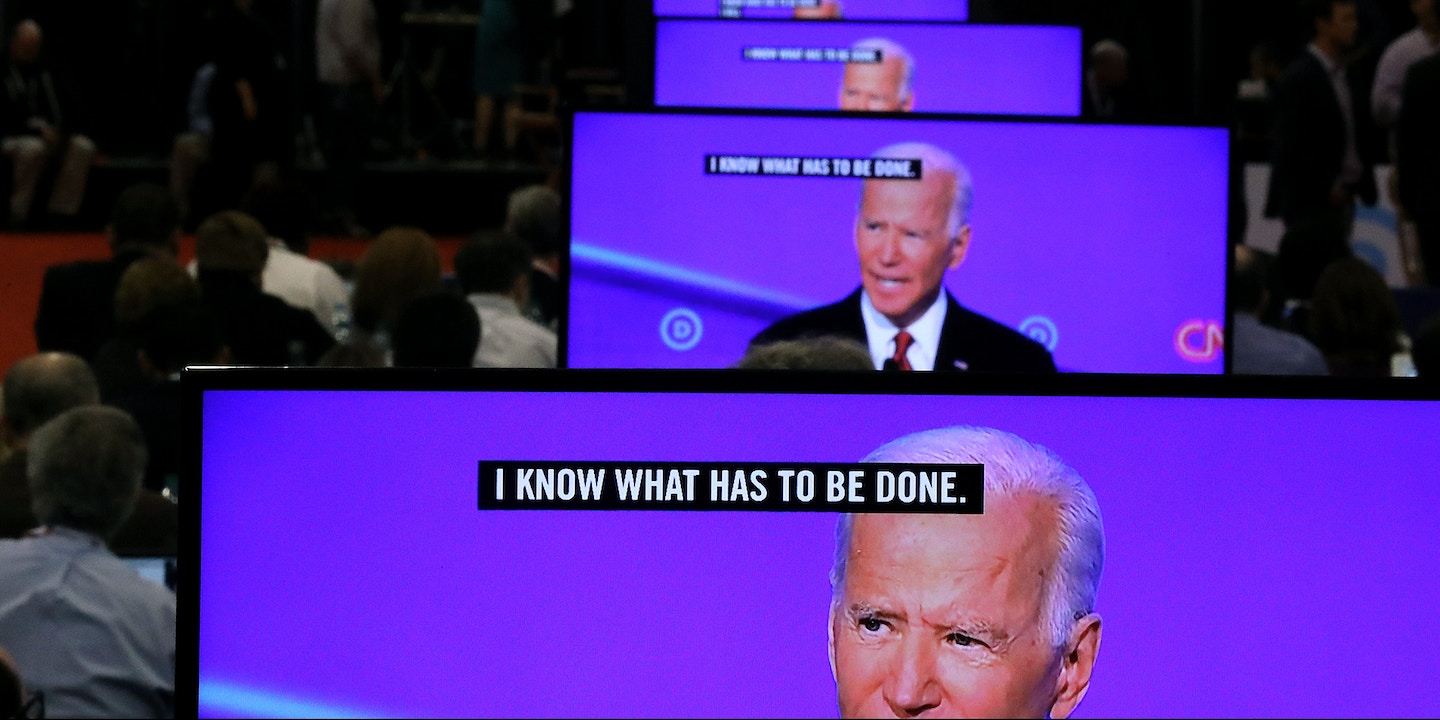 In previous debates, Joe Biden, 76, came out of the gate relatively strong and lucid, not devolving into the kind of gibberish that makes for viral supercuts until the second or third hour of the debate. The vice president took a shortcut in the Democratic Party’s October debate on Tuesday night, skipping his typical strong first hour and heading straight for the looping, elliptical discursions his campaign has become known for. He punctuated it with perhaps the most patronizing barb the Democratic debates have seen this cycle.

It was Biden’s first debate that he didn’t come into as the front-runner, having been eclipsed in the polls by Sen. Elizabeth Warren, and the first question, a softball on impeachment, came to her. He stumbled through his response on impeachment, then was pressed on his son Hunter Biden’s role on the board of a Ukrainian natural gas company while Biden, as vice president, was leading Ukraine policy. It was a question that had no good answer — “On Sunday,” CNN’s Anderson Cooper said, “you announced that if you’re president, no one in your family or associated with you will be involved in any foreign businesses. My question is, if it’s not OK for a president’s family to be involved in foreign businesses, why was it OK for your son when you were vice president?” — and Biden didn’t give one.

After assuring viewers that, “Look, my son did nothing wrong,” he eventually veered into the first president’s famous farewell address on avoiding foreign entanglements but got entangled himself: “On the — look, the fact that George Washington worried on the first time he spoke after being elected president that what we had to worry about is foreign interference in our elections, it was the greatest threat to America.”

Biden’s most aggressive moment in the debate was his most cringeworthy. After he claimed that he was the only person on the stage who’d gotten big things done, Warren noted that she had ushered in the Consumer Financial Protection Bureau, the first regulatory agency built in a generation, and did so over the fierce objections of Wall Street. Biden responded by claiming loudly that he had gone to the Senate and secured votes for it. That claim is dubious at best; Biden had no public presence in the debate over the CFPB and people involved with the fight over it say he did little to nothing behind the scenes either.

In shouting and pointing at Warren and attempting to take credit for her signature achievement, he finished with a verbal pat-on-the-head: “You did a hell of a job at your job,” he told her.

Then later telling her, You did a hell of a job in your job.

Biden’s sunsetting incoherence was made all the more apparent by the contrast with the surprisingly robust return of Sen. Bernie Sanders, 78, making his first public appearance since his heart attack in Las Vegas two weeks ago. Sanders was looser and livelier than in previous debates, perhaps buoyed by expected endorsements from Reps. Alexandria Ocasio-Cortez, Ilhan Omar, and Rashida Tlaib; he has said that he feels stronger and healthier with two stents having cleared an artery blockage, and it certainly appeared that way on stage.

Biden, by contrast, was relatively absent from all the high-profile exchanges of the night: on the initial Medicare for All question, on the wealth tax, on assault weapons buybacks. On Syria, Biden called Trump’s withdrawal of U.S. forces from Syria “the most shameful thing any president has done in modern history in terms of foreign policy,” but the word salad returned as he confused Afghanistan with Iraq — the disastrous invasion of which Biden himself supported.

On Medicare for All, debate moderators throughout the campaign have been fixated on two questions, and two only, when it comes to health care reform: Should private insurance be banned, and will taxes go up for middle-class families?

Sanders acknowledged that in his view, taxes would go up modestly for the middle class, but the burden would be borne by the rich and major corporations. Moderators and her fellow stagemates pressed Warren repeatedly to acknowledge the same, but Warren stuck firmly to her framing of “costs,” insisting that costs will go down for middle-class families and pledging not to sign any bill in which costs would not go down. The pundit class was critical of her refusal, though it mirrored her strategy in the past two debates, and she rose in the polls after both. This suggests that people understand that premiums are already deducted from paychecks, so if whatever tax is involved is less than that, as promised, Democratic primary voters may be willing to forgive Warren’s resistance to feeding Republicans video to use in the general election.

South Bend, Indiana, Mayor Pete Buttigieg jumped on the moment to plug his newly branded “Medicare for All Who Want It” plan, attacking Warren for not giving a straight answer to the question.

“We heard it tonight. A yes-or-no question that didn’t get a yes-or-no answer. This is why people here in the Midwest are so frustrated with Washington in general and Capitol Hill in particular. Your signature, senator, is to have a plan for everything — except this,” Buttigieg said.

Warren hit back. “So let’s be clear, whenever someone hears the term ‘Medicare for All who want it,’ understand what that really means: It’s Medicare for all who can afford it. And that’s the problem we’ve got. Medicare for All is the gold standard,” she said.

After the exchange, Warren’s political director tweeted at Buttigieg that “instead of going after others for being ‘evasive,’” a criticism the mayor levied against Warren last month, he should “look at his own ‘plan.’” She later deleted the tweet.

When, near the close of the debate, Biden weighed in on Medicare for All and touted himself as a candidate who gets things done, Sanders came back with one of his strongest moments:

Joe, you talked about working with Republicans and getting things done. But you know what you also got done … you got the disastrous war in Iraq done. You got the bankruptcy bill which is hurting middle-class families all over this country. You got trade agreements like NAFTA and PNTR with China done which have cost us 4 million jobs.

.@BernieSanders to @JoeBiden: "You got the disastrous war in Iraq done, you got the bankruptcy bill which is hurting millions..., you got trade agreements like NAFTA and PNTR with China done which have cost us 4 million jobs" pic.twitter.com/aBjCAPjNnK

When asked whether Sanders and Warren’s wealth tax plans demonize rich people, Biden again gave a meandering response, saying he’d raise the capital gains tax. “This is one of the reasons why these debates are crazy,” he said at one point, before deferring to the difficulty of the format. “Because everybody tries to squeeze everything into every answer.” Former Rep. Beto O’Rourke called Warren “punitive,” referring to her wealth tax plan, and accused her of “pitting some part of the country against each other.” Warren shot back. “I’m really shocked at the notion that anyone thinks I’m being punitive,” she said.

“My question is not why do Bernie and I support a wealth tax,” Warren said, “it’s why does everyone else on the stage think it is more important to protect billionaires than it is to invest in an entire generation of Americans?”

Asked how he would reassure voters of his health following a heart attack, Sanders pitched his upcoming rally in New York City — and teased a special guest (Ocasio-Cortez, according to the Washington Post). But more convincing was his willingness to jump in on several key moments in the debate.

Biden, in an effort to address the age question, appeared to have a response in the can. Asked how he could handle the rigors of the presidency when he would turn 80 in his first term, he replied, “Because I’ve watched it, I know what the job is, I’ve been engaged — one of the reasons I’m running is because of my age, my experience. With it comes wisdom.” The comment likely drew inspiration from Ronald Reagan’s famous rebuttal. But Biden’s lacked the zing.

Biden’s collapse leaves two clear front-runners, Sanders and Warren. The party establishment, on the hunt for an alternative, could feasibly turn to Buttigieg, who was widely praised for his debate performance. The question over the next couple months is whether it’s too late for him to rise. Biden’s voters, according to surveys, are the least likely to be following the news closely, leaving little room for Buttigieg to rise quickly enough. Instead, Biden’s poll numbers may fade, slowly, to black, bringing the establishment down with them.