How Chicago Teachers Are Taking On Wall Street

The Chicago Teachers Union has focused on the city’s tendency to provide financial incentives for Wall Street, rather than invest in public services. 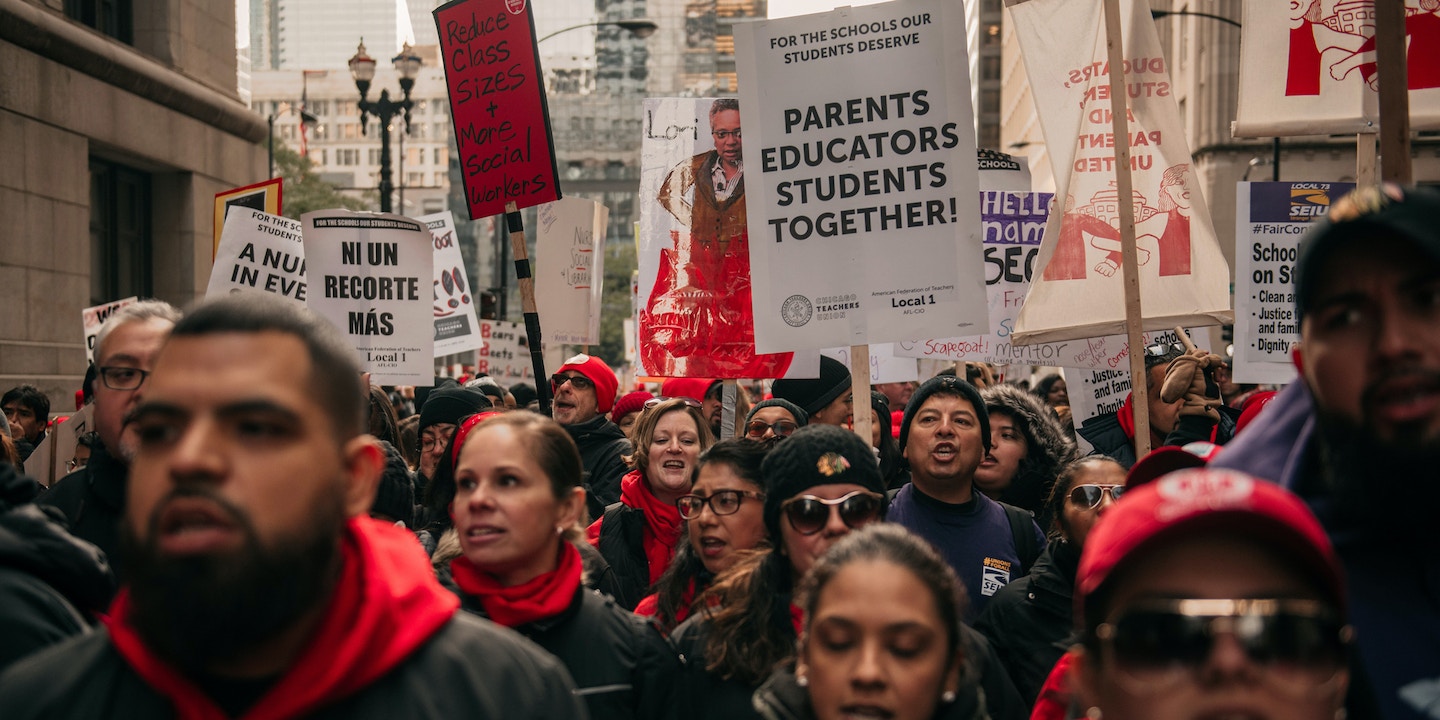 One week into Chicago’s massive school strike, tens of thousands of teachers and staff converged downtown on Wednesday to picket outside City Hall. Inside, Mayor Lori Lightfoot was delivering the first budget address of her term, which began in May, to the city council. As chants echoed from demonstrators outside, Lightfoot issued a resolute message: There is no more money to meet the strikers’ demands, which include class-size caps; more nurses, librarians, and social workers; and a pay bump for support staff making poverty wages.

Speaking to reporters following the address, Lightfoot emphasized that the city did not intend to give money to Chicago Public Schools, or CPS, which has a separate budget but whose board is appointed by the mayor.

“What we’ve been very clear about, is they’ve got to live within their means, whatever those means are and they can’t exceed that, and look to the city to bail them out,” Lightfoot told the Chicago Sun-Times editorial board.

Members of the Chicago Teachers Union, or CTU, bristled at the term. “A bailout? For smaller class size? Come on, that’s not a bailout — that’s an investment in the future of our country,” CTU Vice President Stacy Davis Gates shot back in an evening press conference.

The mayor’s words hit at the heart of a theme that has become central to CTU’s organizing: the city’s tendency to provide bailouts and financial incentives for Wall Street and corporate entities, rather than invest in public services. Ever since the Chicago teachers staged a landmark strike in 2012, they have expanded the scope of issues — and enemies — the union is taking on, deploying a strategy known as “bargaining for the common good.”

This time, the CTU’s 25,000 members are on strike alongside 7,500 special education assistants, custodians, and other school support staff represented by SEIU Local 73. As the strike enters its second week, a contract victory may depend on unions and their allies winning their larger political argument: that there’s plenty of money in the city, it’s just concentrated in the wrong hands.

The outcome in Chicago could also be instructive for likeminded unions. More than 50 labor and community groups are now part of a national Bargaining for the Common Good network, which aims to identify and organize against shared enemies, including Wall Street and corporate America.

“A central element of Bargaining for the Common Good is researching and identifying the banks, private equity firms, and hedge funds who are pulling the strings.”

“A central element of Bargaining for the Common Good is researching and identifying the banks, private equity firms, and hedge funds who are pulling the strings,” said Marilyn Sneiderman, executive director of the Rutgers Center for Innovation in Worker Organization. “The CTU’s demand that [public resources] be used to fund schools, not subsidize developers, is a good example of this.”

During her budget address, Lightfoot announced that she would attempt to close the city’s $838 million budget shortfall through $352 million in new revenue “rooted in progressive economic, financial, and social policy,” as well as $530 million in savings and efficiencies.

Moving surpluses out of the city’s TIF funds would free up another $66 million for CPS, said the mayor, but this would only cover the contract offer she had already made to the unions. A mayoral aide told the Chicago Sun-Times that this was akin to “scraping the mayonnaise jar.”

Lightfoot’s offer to teachers before the strike began included a 16 percent pay raise over five years. Thanks to restrictive state law, the school district isn’t required to negotiate over any issues beyond pay, benefits, and the length of the school day. But through strikes and public pressure, the CTU has been able to move the needle on funding issues in the past, and they’re holding out for new guarantees on what they say are key investments in public schools.

As of Wednesday night, the CTU reported that tentative agreements had been reached in “technical” areas, such as providing translation services for parents when discussing a student’s special education plan with them. “But on the critical issues — including caps on exploding class sizes and desperate staff shortages — Mayor Lightfoot has refused to budge,” the union said in a statement.

When the teachers union first presented its contract demands in January, it acknowledged that fulfilling them would be expensive and suggested a funding source.

“Where will the money come from? Rich people,” quipped Gates, the CTU vice president.

Since then, the CTU has worked with a coalition of unions and community groups to propose a list of new taxes that could be used to generate revenue, including a financial transaction tax on the city’s central district that the teachers union has billed as “Chicago’s Wall Street.”

The CTU and its allies have also spent nearly a decade highlighting “dirty deals” with Wall Street and corporations that cost — or still cost — the city and the school district billions. Those include $1.4 billion that the city and CPS combined paid out to big banks through interest-rate swap deals that went bad after the financial crash; $1 billion in interest payments that the city will make to Wall Street investors on the estimated $700 million it borrowed to pay for police misconduct settlements between 2010 and 2017; and, most recently, more than $2 billion in TIF funds earmarked for new mega-developments.

The CTU has successfully turned two particular Wall-Street linked developers into a bête noire in the budget discussion this fall.

The CTU has successfully turned two particular Wall Street-linked developers into a bête noire in the budget discussion this fall. Lincoln Yards, a $6 billion, 55-acre mixed-use riverfront development, is backed by Lone Star Funds, a private equity giant known for buying up distressed mortgages and then foreclosing on homeowners nationwide, including in Illinois. The 78, a similarly sprawling development planned for the city’s rapidly gentrifying South Loop, is being built by a subsidiary of Related Companies, the juggernaut owned by billionaire Donald Trump fundraiser Stephen Ross, which is also behind New York City’s hotly contested Hudson Yards project.

Lightfoot has attempted to quash the notion that the planned TIF subsidies to the new developments are relevant to ongoing labor negotiations. “We cannot strike a deal based on the illusion that there’s Lincoln Yards money available that we can just shift somewhere else,” she said on Monday.

In April, two community organizations sued City Hall over the Lincoln Yards TIF, arguing that it would exacerbate racial inequality through further gentrification. A judge dismissed the lawsuit for lack of standing, but the groups are planning to appeal.

The bigger issue is whether the city is actively looking for ways to claw black money from Wall Street and find new, progressive revenue sources, said Saqib Bhatti, co-executive director of the Action Center on Race and the Economy. It appears, so far, the answer is no.

In February, Bhatti co-authored a report identifying $3.7 billion in potential annual revenue from sources including a city income tax, a speculation tax on financial exchanges in Chicago, and a corporate use fee — enough to pay for universal early childhood education, free community college for all, free public transit, and a program to alleviate homelessness in Chicago.

The mayor’s budget address included a slightly less ambitious version of one of these options: a tax on the sale of high-end homes. But otherwise it mostly relied on “Band-Aid solutions,” Bhatti said. One of the main cost-saving options outlined by Lightfoot, refinancing a portion of city debt by issuing new general obligation and sales-tax securitization bonds, could end up leading to higher interest payments down the road.

Bhatti argues that to free themselves from Wall Street’s grip, cities should act more like unions that refuse to play by the rules as written. If they acted collectively, they would have more power to demand better terms from big banks, eventually moving toward the establishment of public banks.

“Instead of vilifying unions like the CTU that are trying to expand the scope of the issues at the table, cities like Chicago should take a page from their book,” he said. “Stop negotiating around the margins with Wall Street and corporations, and start trying to find solutions that serve the interests of our communities.”