Labor, Ever So Gingerly, Tiptoes Into the Insurgency 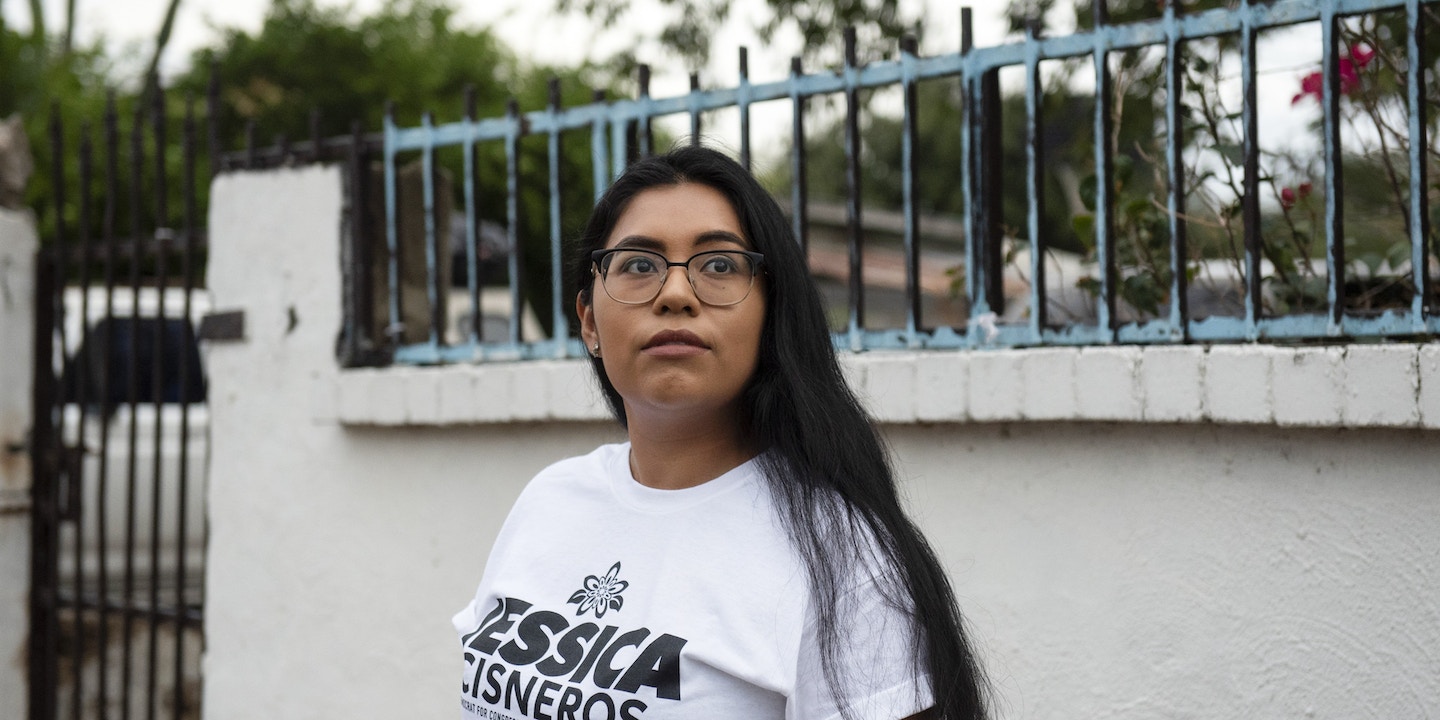 Ever since 26-year-old Jessica Cisneros announced that she would be challenging Rep. Henry Cuellar in the primary for Texas’s 28th District with the support of Justice Democrats, the primary unfolded about as well as Cisneros could have expected. The Cuellar campaign dismissed her as an out-of-touch leftist with few roots in her community. Cisneros plowed ahead, swore off corporate PAC and lobbyist money, and began putting together her volunteer operation. The national press, perpetually on the hunt for “the next AOC,” breathed life into her campaign. Local media, not wanting to miss the upset, took her seriously too. Fundraising was robust.

But then the race took an unusual turn: On October 23, Cisneros picked up a key union endorsement, Communication Workers of America District 6, and on Saturday, she’ll be speaking in Austin at a political rally hosted by AFSCME Local 1624. The event is being held to gin up excitement for 2020, and Cuellar was not invited.

“Personally, I just think it’s time for change, and I want to see younger, fresher blood running for public office, who I can relate to, who can relate to our workers, and who honestly look like everyday common folks,” said Yvonne Flores, president of AFSCME Local 1624. “For me, that’s like, hell yeah, let’s get Jessica on stage and hear her talk.”

Organized labor, which typically allies with the party establishment in the face of ongoing insurgency, has company in opposing the incumbent Democrat. Cisneros has scored endorsements from Sen. Elizabeth Warren; the Working Families Party; Rep. Alexandria Ocasio-Cortez, D-N.Y.; and even EMILY’s List, all betting that the deep-blue district, which went for Hillary Clinton by nearly 20 points, is tired of an anti-choice Democrat who often votes with President Donald Trump and the Republican Party.

Cisneros stunned when she announced a fundraising haul of $310,000 in the third quarter, and her campaign confirmed that Ocasio-Cortez’s endorsement in October has fueled even more small-dollar donors.

Unions have good reason to be interested in this race. While Cuellar is more commonly known for voting to support a 20-week abortion ban and funding a Mexican border wall in his own southern Texas district, his record on labor issues has driven worker advocates crazy for years.

In May, Democratic Rep. Bobby Scott introduced the Protecting the Right to Organize Act, a bill that would eliminate right-to-work laws, impose new penalties on employers who retaliate against union organizing, crack down on worker misclassification, and establish new rules so employers cannot delay negotiating collective bargaining contracts.

The bill has 214 Democratic co-sponsors, and Cuellar is not among them.

“It’s something his staff is monitoring to see how the bill evolves and changes, and then he’ll make a decision,” Colin Strother, Cuellar’s campaign spokesperson, told The Intercept. “Three out of four jobs in our district are created by small businesses, so he always has an eye toward how something will impact small business.”

It’s certainly not the first time Cuellar has cited protecting small businesses as a reason to avoid pro-worker legislation. He was one of the few Democrats not to co-sponsor the $15 minimum wage bill the House passed this summer, and while he ultimately voted for its passage, he also voted for an unsuccessful amendment that would have exempted millions of workers from the law. Cuellar has also criticized many of the signature labor reforms of the Obama era — including expanding overtime pay to 4 million workers and holding corporations liable for the violations of their franchisees. He’s one of just three Democrats to co-sponsor legislation restricting the definition of a joint employer, which would make it harder for workers at franchised companies to unionize and hold large corporations accountable.

Cisneros told The Intercept that she can be counted on to support the Protecting the Right to Organize Act, increasing the federal minimum wage to $15 an hour, and supporting the broader joint-employer standard outlined by the National Labor Relations Board in 2015. “I look forward to being a true champion for the working people of our district,” she said. “This can’t be done without strong labor laws that allow workers to negotiate for proper pay, good working conditions, and the benefits they deserve.”

Strother argued that since Cisneros has never run for office or been in politics, her positions at this stage amount to “fairy tales.” Her stated priorities of a Green New Deal and Medicare for All, he insisted, “would be devastating to the labor movement in this country” and make her “the most anti-labor Democrat that’s run in this district since Henry’s been elected.”

On trade, Cuellar has similarly stood out from his Democratic colleagues in the House and has made no secret that he’s doing all he can to pass the U.S.-Mexico-Canada Agreement, Trump’s renegotiated version of NAFTA. In October, he told Politico that he’s ready to approve the deal, describing it as “an easy vote.” Unions have repeatedly said the deal is not ready to come to the floor, as its provisions around labor, the environment, drug pricing, and enforcement are not yet strong enough.

“He’s OK with a race to the bottom to allow companies to compete where they can find the cheapest labor market,” said Harrison Hiner, a spokesperson for CWA District 6.

Cisneros pointed to her hometown of Laredo, the largest trade port in the country. “Our trade partnership with Mexico affects the lives of everyday workers in our district and is critical to our economy, yet unlike my opponent, I oppose trade agreements that fail to include enforceable labor standards,” she said. “I would not support legislation to authorize ‘fast-track’ procedures to approve trade agreements without sufficient congressional approval and oversight.” A main concern is that a weak trade deal would drive down U.S. wages and further exploit Mexican workers.

Strother, Cuellar’s campaign spokesperson, contested the idea that the trade pact is being rushed through, pointing out that lawmakers have been working on it for years. When The Intercept asked if Cuellar was working with labor on the trade deal, Strother said, “I wouldn’t characterize it like that,” but said that Cuellar will listen to anyone who raises concerns to try and build consensus.

The CWA hasn’t endorsed Cuellar since he first ran unsuccessfully for Congress in 2002. “We try to work with both sides of the aisle, but Democrats usually pitch themselves as representing working-class people,” Hiner said. “On a number of issues, he has broken ranks with workers, and that’s putting it nicely.”

Krissy O’Brien, an organizer with AFSCME Local 1624, told The Intercept that the national attention Cisneros has received has really helped galvanize activists back in Texas, which is partly why she was invited to speak at the union’s upcoming event. Nina Turner, a co-chair of Sen. Bernie Sanders’s presidential campaign, will be the rally’s keynote speaker.

“The conference is to ignite the base in Texas, especially our membership,” said O’Brien. “We want to talk about what’s at stake, the flippable congressional seats, the chance to take back the Texas House, redistricting — there’s just all these things we want to make sure everyone is aware of. We want to get our members excited, engaged, and ready to rock.”

Given Cuellar’s record, one might ask why he’s faced no serious challenger before. A former Democratic lawmaker in the Texas legislature chalked it up to the fact that labor is fairly weak in Cuellar’s district, so unions weren’t really able to focus their attention on House primaries. “But since someone is now making a very serious run and has proven herself as a serious fundraiser, they’re paying attention,” they said.

Hiner agrees. “I think all the national attention, and the fact that she’s proved she can raise money, has made her a viable alternative to folks who really haven’t had that before,” he said. “And sometimes other good options just never step forward.”

While the unions may not all be flush with cash, they can provide formidable boots on the ground, especially from big cities across the state. Other progressive groups in Texas, like the Texas chapter of the Working Families Party, are already planning to get involved in the race.

Cuellar’s campaign, for its part, is trying to argue that the CWA’s endorsement is illegitimate. The congressman has “always been supportive of labor,” said his spokesperson, “and in fact, the CWA endorsement was really a farce. We didn’t even get a chance to sit for an interview.”