Peter Handke’s publisher, Suhrkamp, is being criticized for its 24-page memo on the writer’s denial of the Serb genocide of Muslims in Bosnia. 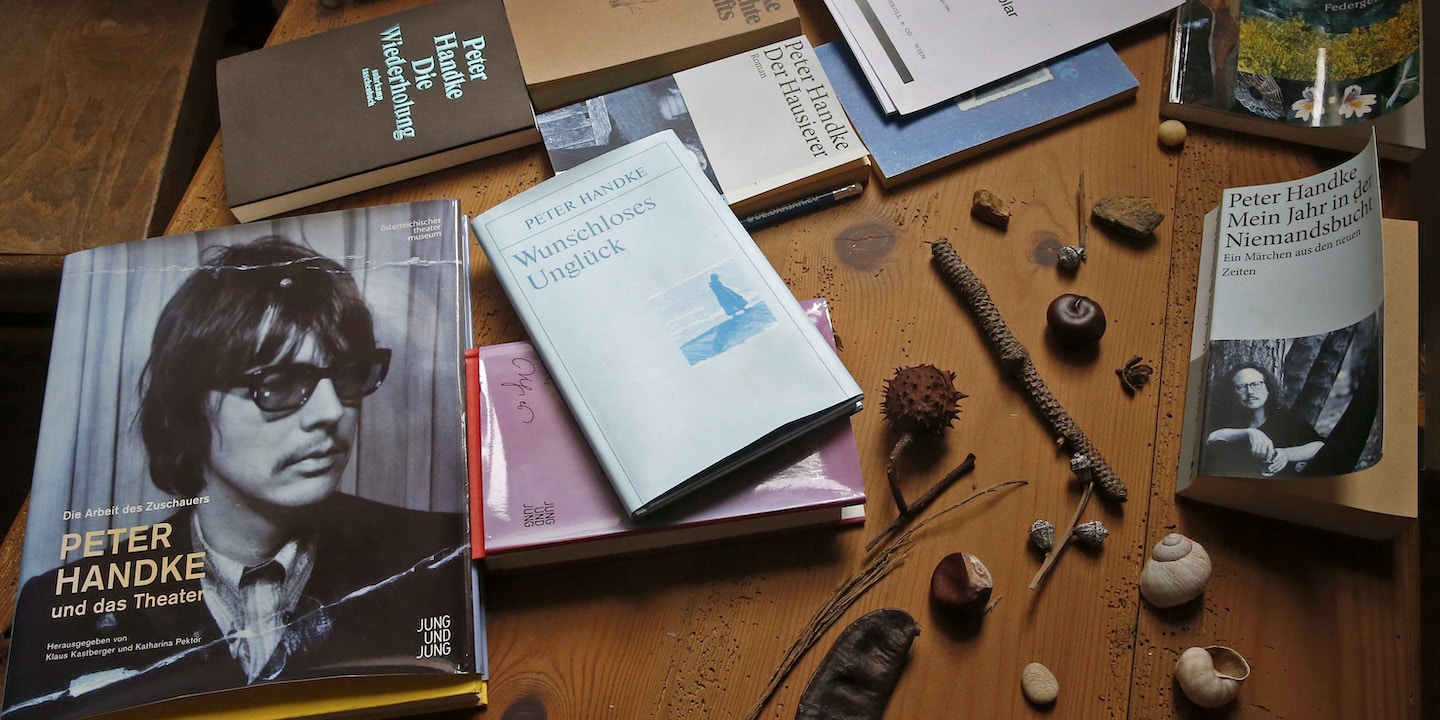 It is not typical for a publishing house, after its author wins a Nobel Prize for Literature, to feel obliged to issue a private 24-page defense of his work, but that’s what it has come down to for Suhrkamp Verlag, the publisher of Peter Handke.

Newspapers in Germany and Austria began reporting on Suhrkamp’s strange document a few days ago, noting that it was dated October 31 but had not been released to the public. The document, according to the news reports, was apparently a confidential one intended mainly for the benefit of foreign publishers of Handke’s work who had found themselves, like Suhrkamp, in an uncomfortable position as a result of his record of downplaying Serb atrocities against Muslims in the Bosnia war. It seems possible that the document was also intended for Nobel Prize jurors who might be having second thoughts about their controversial selection. After Handke was announced on October 10 as the winner of the 2019 literature prize, there was an almost immediate wave of protest that his books, articles, and speeches amounted to genocide denial.

The document, written in English with Suhrkamp’s name and initials on the title page and the notation “Work in Progress,” was not reprinted by the German-language news outlets that reported on it, but The Intercept has obtained a copy. Making frequent and critical references to articles I wrote in the past few weeks, the document argues that it’s wrong to examine snippets of an author’s work — so in the interests of allowing readers to come to their own conclusions about Suhrkamp’s work, The Intercept is publishing the version it obtained. (A slightly truncated and unofficial version without Suhrkamp’s logo was posted on November 3 by Handke’s American translator on his personal blog, but it seems to have gone unnoticed;  there were no articles written about it at the time.)

Although the German and Austrian media have generally been supportive of Handke winning the Nobel, Suhrkamp’s rambling defense has not received positive reviews from them. “It may work here and there, but in its entirety it is a problematic endeavor,” wrote Der Tagesspiegel, accusing Suhrkamp of doing what the publisher was accusing others of doing: “Many of the Handke quotes are torn from their context.” The Frankfurter Allgemeine was more cutting, asking whether the document “will enter literary history as an act of heroism or an act of villainy.” And an article on the website of Deutschlandfunk Kultur pointed out that Suhrkamp may have shot itself in the foot because Handke’s defenders, including the Nobel Prize committee, have publicly insisted that he is not a political writer and should be judged on literary merits alone — yet the publisher’s effort to define the political meaning of his work “invalidates the argument that Handke is not a political author.”

The selectiveness of Suhrkamp’s defense is illustrated by its first example, which cites four critical stories: two from The Intercept and two from the Guardian. All four stories, published after the Nobel announcement, described Handke as having engaged in genocide denialism. Suhrkamp argues that “Peter Handke has neither denied nor excused genocide and war crimes in the Yugoslav wars,” and it cited two statements he made, one in 2006 and another just over a week ago. But while Handke certainly made those short and begrudging statements, he has also made a far larger number of longer statements and comments in his books, articles, and interviews that heaped skepticism and sometimes scorn on the history of massive Serb atrocities in Bosnia (the International War Crimes Tribunal for the former Yugoslavia delivered guilty verdicts on war crimes and genocide against an overwhelming number of Serb defendants). Suhrkamp tries to deflect from that problem by saying, “Handke’s questioning does not apply to the crimes per se, but to the way in which they were reported. From this media-critical approach, he attempts to historically expand the media’s handling of acts and declarations of war from a Yugoslavian and Serbian perspective.” The statement uses the phrase “media-critical approach” on three occasions.

Suhrkamp officials did not reply to requests for comment from The Intercept.

The statement, if you’re in the right mood, is nearly comically inept in places. For instance, it seeks to rebut critics who have noted Handke’s closeness to Serbian strongman Slobodan Milosevic, who engineered the genocide in Bosnia, was deposed by his own people in 2000, extradited to the Hague for a war crimes trial a year later, and died in prison before a verdict was delivered. Handke visited Milosevic in prison and delivered a eulogy at his funeral in 2006. Trying to deflect these connections between the future Nobel Prize winner and one of the worst tyrants of recent decades, Suhrkamp weakly noted in its statement that although Handke was officially named by Milosevic’s lawyers as one of their possible defense witnesses, “He decided not to testify at the trial” (emphasis in the original).

The statement also dissembles about Handke’s passages on prison camps. It tries to defend him by focusing on the reason he didn’t think the phrase “concentration camp” was an appropriate description for anything in Bosnia, because it evoked a Holocaust comparison that he felt was inappropriate. While that’s disputable, it’s an ancillary aspect of the critique against what he wrote on the camps. Handke always insisted on spreading the blame on all sides, emphasizing that there were Croatian and Muslim camps too. As Suhrkamp noted (again in boldface), “Peter Handke has not denied the existence of camps in the Yugoslav wars.” But that misses, probably intentionally, the most important thing — that the Serb camps were monstrously larger, frequently lethal, and clearly systemic (as the war crimes trials in the Hague demonstrated in case after case). Obscuring the specificity of the Serb camps, as one of The Intercept stories noted, is a way to deny or obscure the crucial fact that there was only one side — the Serbs — that started the war, tried to commit genocide, and created a network of concentration camps to make that happen.

The statement is nakedly deceitful in its treatment of what Handke wrote about Serb massacres of Muslims in the city of Visegrad in 1992. In its statement, Suhrkamp insists in boldface that “Peter Handke has not denied that crimes against humanity were committed in Visegrad.” As proof, Suhrkamp cites a passage Handke wrote: “according to eyewitnesses, many of the victims […] were pushed off the bridge over there, and all on the orders of a young Serbian militia leader.” However, it is almost perverse that Suhrkamp uses that passage to defend Handke, because the book it comes from, “Summer Addendum to a Winter’s Journey,” derides the accounts of witnesses in Visegrad — saying, for instance, they were “exclusively Muslim” and wondering aloud why, if they had witnessed atrocities, they would have been allowed to escape the city to testify about them. When Handke uses the word “eyewitness,” it is to question the veracity of the account. (The full passage that Suhrkamp has selectively quoted from is reproduced at the end of this story).

Suhrkamp, in its 24-page statement, has embraced Handke’s practice of laying literary crimes upon war crimes.

Here is the full passage Handke wrote on the Visegrad killings that Suhrkamp selectively quoted from; the line quoted by Suhrkamp is italicized.

Late at night, then, standing at the open window in the room at the Hotel Visegrad. No peep any more from the town behind me, and the massive bridge, glimmering in the dark, now depopulated, under the already summery southerly bright stars, that seem not to belong to this part of the earth, not connected to it by anything at all any more, and now, the image is crossed by the thought about the reports of killings in the local Muslim community almost exactly four years ago: according to eyewitnesses, many of the victims […] were pushed off the bridge over there, and all on the orders of a young Serbian militia leader; in my memory now, above all: an article from the New York Times, studded with statement after statement against this man, who at this point has vanished, this man who “often went barefoot,” a main characteristic, in the paramilitary force that he had named “The Wolves,” and among the, as usual, exclusively Muslim witnesses for the prosecution, also, again as usual, that one singular Serb, a soldier from this town, a prisoner now, interrogated there by a UN policeman, but later, so it was said, exchanged and also vanished (almost certainly “to his ruin,” the paper wrote).

And I couldn’t help but ask myself, why in this war, again and again, the possible main witnesses of the atrocities had, as it seemed, without much ado, been cleared for exchange, a fact that appeared in every such report, and that was passed on every time completely unquestioned. If this and that witness knew something so terrible, so revealing, why then exchange him and let him go?

And why did the aforementioned article pretend that that Serbian-Bosnian wolf gang here in Visegrad had had complete freedom to execute its months of raging in 1992? The entire city a gruesome playing field for nothing but the few barefooted people playing cat and mouse with their hundreds of victims? (The Serbo-Serbian army, as the usual reports went, watched from across the border, doing nothing, if not covertly joining in, as was even more widely reported.) Hadn’t the civil war erupted back then, with fighting on all sides almost all over Bosnia? How could such freewheeling terror rage, given an overwhelmingly Muslim population, long and well prepared for war, and largely in positions of authority? The Ivo Andric memorial over there at the entrance to the bridge, hadn’t it been bombed away already the year before the war started, as a signal for that, and by whom?

Update: Nov. 13, 2019
This story has been updated with the addition of the full passage Handke wrote about Visegrad that Suhrkamp selectively quoted from.