A choice moment in “The Report” comes when Dianne Feinstein asks Daniel J. Jones what he thinks of Edward Snowden. “I think he’s a traitor,” she says. 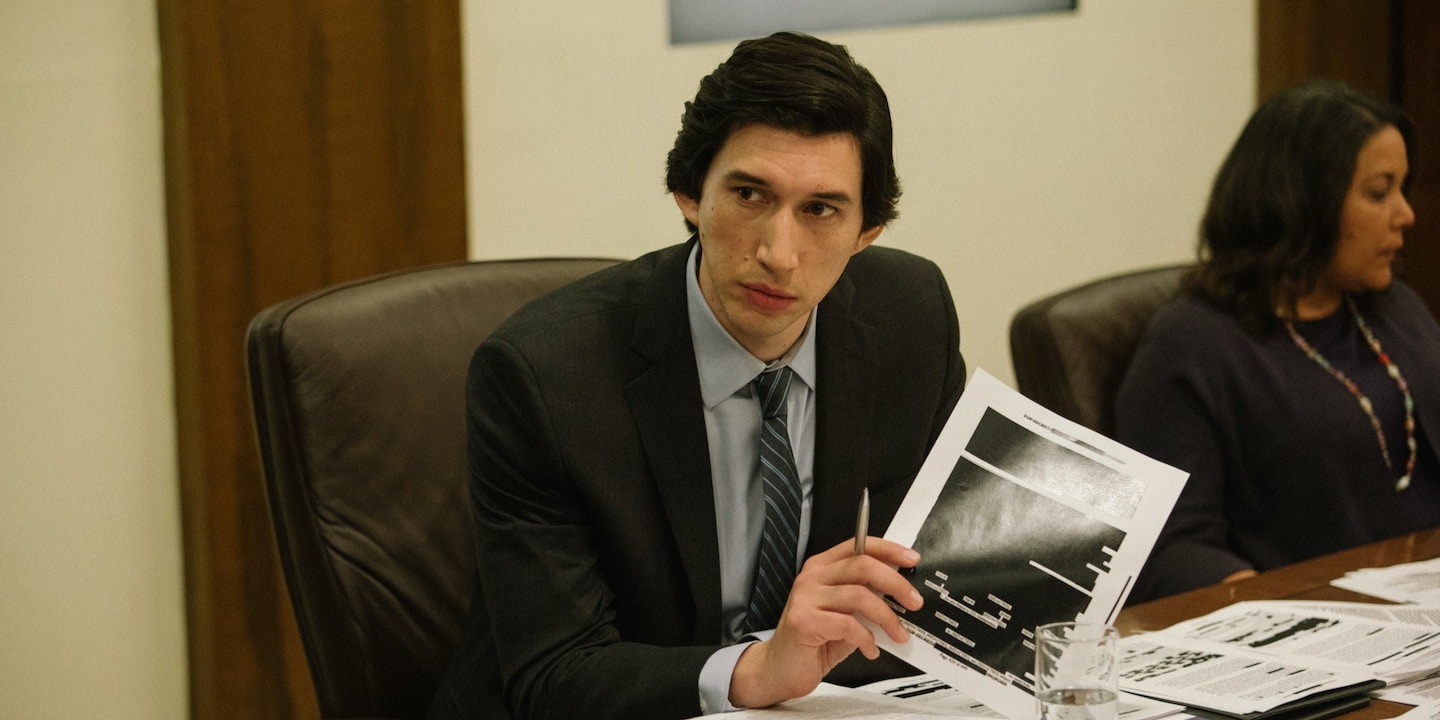 Standing in line for a movie screening at the Newseum this past week, I overheard a conversation — the kind I’ve come to realize is banal in Washington, D.C.

Two Capitol Hill staffers behind me were lamenting the risks of inviting their journalist friend to parties. “I couldn’t believe I had to tell him he couldn’t report on what he heard at the party,” one said. “Yeah,” replied the other, “We agreed long ago that our house was off the record.” “And then when I told him,” continued the first, “he stopped coming to my parties.”

We were waiting to see the D.C. premiere of “The Report,” the new movie written and directed by Scott Z. Burns that chronicles the struggle within the government to release the Senate Intelligence Committee’s five-year investigation into the CIA’s use of “enhanced interrogation techniques” — i.e., torture — following 9/11. The inquiry had roots in a prior investigation, beginning in 2005, into the destruction of CIA tapes showing the waterboarding of detainees. In 2009, the committee voted to initiate an expanded investigation into the CIA’s program. Five years later, the committee released a summary of the report that was heavily redacted and a tenth as long as the full report. The Obama administration and the CIA pushed to remove any details that would lead to real accountability, keeping the CIA officers involved anonymous and blacking out the names of the countries where torture had occurred.

Around 8 p.m. on Tuesday night, after over an hour of open bar and a red carpet expressly set up for Instagramming, Burns — known as the screenwriter for “The Bourne Ultimatum” and “The Informant!” — introduced the movie. He began by thanking Daniel J. Jones — the Intelligence Committee staffer detailed to the investigation into black sites, rendition, and “enhanced interrogation” — and Sen. Dianne Feinstein, D-Calif., chair of the Senate committee, both of whom were in the audience. When Burns addressed Feinstein, the packed house in the Newseum auditorium burst into applause. Annette Bening (who plays Feinstein in “The Report”) “sends her regards,” Burns said. “She wants you to know you’re her hero.” I watched the back of Feinstein’s head bob up and down in acknowledgement.

For many in the room that night, the movie was a celebration of the bureaucratic government work that too often doesn’t make it into the limelight. But opening in the midst of an impeachment inquiry sparked by a whistleblower, “The Report” is also a rumination on the internal calculus of government employees who want to revolt against official secrecy — as Jones did — and whether the public’s right to know is best served by revealing illegal government activity through official channels or sharing it with the press.

The movie surfaces another story about how and when congressional staffers decide to leverage journalism for their own purposes, and how whistleblowing is viewed in the culture of the capital.

“The Report” begins, like Spencer Ackerman’s 2016 rendition for The Guardian, with Jones breaking the law. Jones, played by Adam Driver, had been tasked by the Intelligence Committee with sifting through millions of documents, cables, and emails related to the CIA’s interrogation techniques in a windowless room designed to contain sensitive material. One file in particular caught his attention: an internal report prepared by the CIA for former Director Leon Panetta that seemed to corroborate the Senate’s findings. Worried about losing access to this file when it became clear that the CIA was intent on preventing the Senate from releasing anything about the torture program, Jones illegally removed it from the building. That document became a critical piece of leverage in countering the CIA’s resistance to the release of the Senate’s torture report.

The existence of the public Senate report, albeit in its limited form, is something of a bureaucratic miracle. The CIA’s own investigation into the matter, the document produced for Panetta, was deep-sixed, and President Barack Obama made an explicit decision when he came into office not to pursue the investigation. He wanted to appear, as the movie notes, “post-partisan.” Without Jones’s relentless work, we might never have known the depths to which the CIA fell in the years after 9/11.

“The Report” is a useful reminder of the inhumanity and ineffectiveness of torture and of the key fact that no one was held accountable. The graphic reenactments of torture scenes with blaring music, nudity, and physical abuse are second only to the full-throated embrace by a CIA officer of everything from imposing “learned helplessness” to waterboarding.

But the movie surfaces another story about how and when congressional staffers decide to leverage journalism for their own purposes, and how whistleblowing is viewed in the culture of the capital. It’s the same thing those Hill staffers in line were wrestling with, at a different level: A sense of both the value and the danger of the press is instilled from above. A choice moment in the film comes when Feinstein, meeting with a frustrated Jones, asks him what he thinks of Edward Snowden. Jones is silent. “I think he’s a traitor,” Feinstein says.

According to the movie, Jones, who was notoriously reticent when it came to talking to reporters, leveraged the press to his and the report’s benefit only once: when he himself became the subject of CIA intimidation. After having removed the Panetta report, he gives a reporter a cryptic clue, telling him to look into computer hacking targeting the Senate. The reporter asks for more information. “You’re the New York Times national security reporter, you should be able to figure it out.” Jones walks away, leaving the Times reporter incredulous. The crowd in the Newseum giggled.

The movie, here, elides the fact that reporter who actually broke this story was Ali Watkins — then a reporter at McClatchy who only later worked a stint as national security reporter at the New York Times (she now works on the Metro desk). “The Report” is an insider’s movie: It doesn’t name most of the characters, some because they’re CIA officers who were given pseudonyms in the summary that was released, some because they’re staffers who worked with Jones. (I overheard someone wondering out loud, before the movie began, how the composite character that included his friend would be portrayed.) Like the report itself, the story is unwieldy, and giving it a Hollywood treatment necessitates the lionizing of some and the sidelining of others.

At another crucial moment — in December 2014, when Feinstein is in her last week as chair of the committee, as the Republicans come to power during Obama’s second term — Jones again weighs the prospect of talking to the press. A moody Jones puts his entire report into his bag and drives to meet the same reporter in a parking garage. “If the Times had your report, we would print it tomorrow,” the reporter says. Jones struggles for a moment before reaching his conclusion: “No. If it’s gonna come out, it’s gonna come out the right way.”

This approach ultimately pans out. The Democratic caucus in the Senate pressures Obama’s chief of staff, Denis McDonough (played by Jon Hamm, the perfect hotshot), to get the redacted summary of the Senate report out. The movie nails this moment as a crucial indictment of the Obama administration for wanting to move beyond what happened, rather than own up to it. But pause on Jones’s dramatized decision for a moment. He took a leap of faith; he chose to believe in the importance of the process. That time, it paid off (sort of). What if it hadn’t? Jones is something of a unicorn in having moved against the government via official channels and emerging relatively unscathed.

And what does it mean to put something out “the right way” anyway? The implication is that the report gained some kind of authoritative status because it was condoned by the Senate and the White House. The government publicly admitted that it tortured people, and promised never to do it again, even in the fog of the war. But imagine an alternate history, in which an unredacted summary had been released — a version that didn’t eviscerate the details. If that had happened, there would have been a chance at something more than symbolic justice.

The movie portrays Jones as a hero for turning away from the temptations of journalism. As a viewer who is immensely skeptical of official process, I believe that sharing evidence of government malfeasance with the press is a legitimate and often necessary check on power. But how will Americans respond to this movie when it’s released on November 15, after months of headlines about cover-ups, whistleblowers, and leaks?

For the room in D.C., “The Report” felt like a salve on a difficult time, a reassurance that the system can work as it’s set up.

The best-case scenario is that “The Report” helps viewers understand the powerful forces working against transparency. For the room in D.C., the film felt like a salve on a difficult time, a reassurance that the system can work as it’s meant to.

The depressing thing is that getting the truth out there doesn’t always result in change. On my way out, I picked up a free copy of the almost 600-page summary of the Senate’s torture report, reprinted by Melville House. On the back, one line seems to say it all: “The book that inspired the major motion picture.” Oh God, I thought, is this the fate of all that work? A new cover plastered with Driver’s face? After all, Gina Haspel, who played a key role in the destruction of the torture tapes, is now the director of the CIA, as the movie wryly notes in its end cards. Abu Zubaydah and Abd al-Rahim al-Nashiri, two of the victims of U.S. torture and the subjects of the destroyed tapes, are still being held in Guantánamo Bay. Not even the Newseum will be around that much longer.