Progressives want to use the defense budget to stop support for Saudi Arabia’s war, but are enough Democrats willing to take a stand? 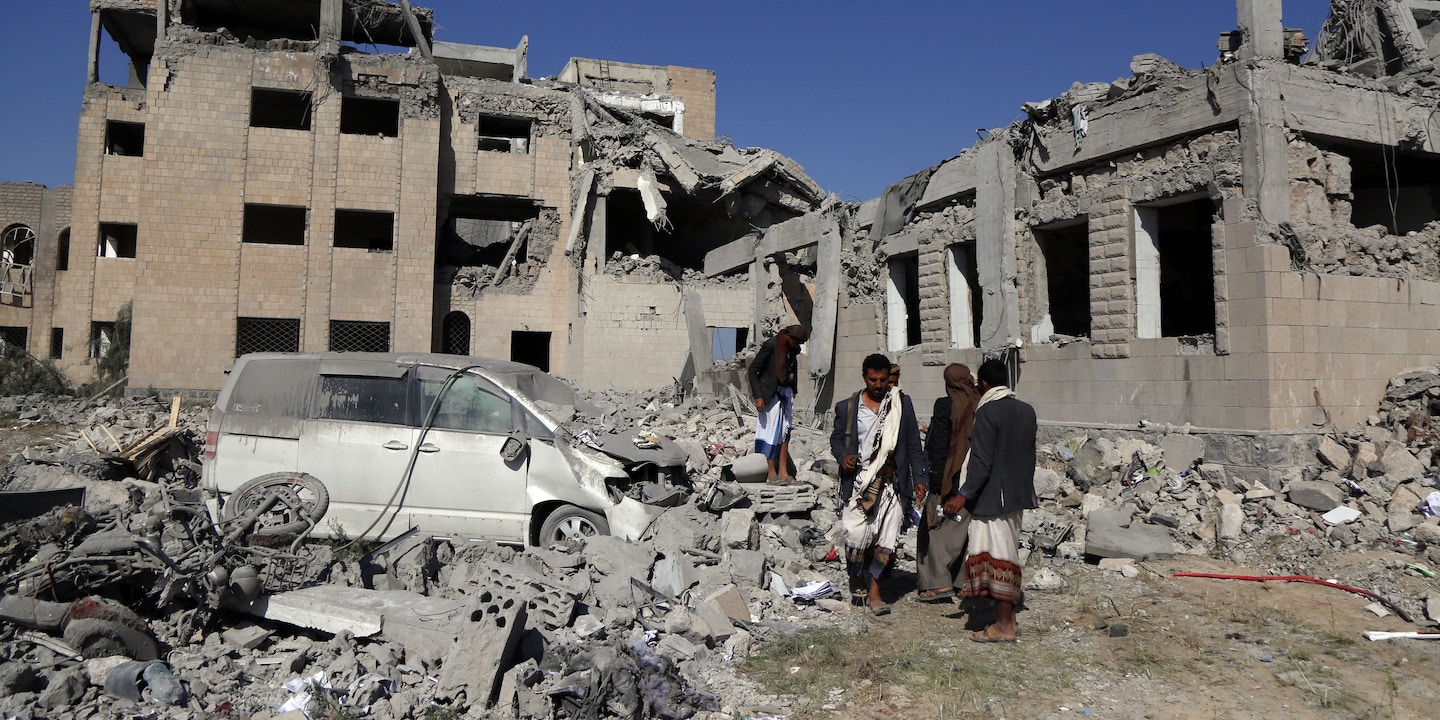 As soon as next week, Democrats in Congress will have another chance to end U.S. participation in the brutal Saudi-led war in Yemen.

When lawmakers return from Thanksgiving break, passing the National Defense Authorization Act — a bill known as the NDAA that specifies the annual defense budget — will be high on their list of priorities. Since President Donald Trump vetoed a bipartisan War Powers resolution to halt U.S. activity in Yemen in April, a broad coalition of anti-war groups, advocates, lawmakers, and, notably, a group of former national security officials have called on Congress to use its power over appropriations to bring U.S. involvement in the war to an end.

In July, California Democratic Reps. Ro Khanna and Adam Schiff, along with Washington Democratic Reps. Pramila Jayapal and Adam Smith, who is chair of the House Armed Services Committee, co-sponsored an amendment to the NDAA that would defund U.S. military support for activities in Yemen. It passed with bipartisan support. Another amendment to the House bill prohibits war with Iran without congressional authorization.

Yet the Senate version of the defense bill contains neither of those measures — and it remains unclear whether they will survive reconciliation, the negotiating process by which bills from each chamber are merged.

The chairs and ranking members of the House and Senate armed services committees — Smith, Rep. Mac Thornberry, D-Texas, and Sens. Jack Reed, D-R.I., and Jim Inhofe, R-Okla., who are collectively known as “the Big Four” — have been negotiating behind closed doors over language for a final bill since September. By the end of last week, those talks had stalled, largely over disagreements about matters unrelated to the Yemen language. A spokesperson for the House Armed Services Committee assured The Intercept that the negotiations were still underway “despite press reports” to the contrary.

“It is time to stand up to this president and block every nickel of taxpayer money from going to this illegal war. Without U.S. support, the Saudi bombings on innocent civilians could not continue.”

If an NDAA comes to the floor without language similar to the Khanna-led amendment, anti-war groups are calling on Democrats to vote against it.

“Democrats increasingly purport to support putting an end to the country’s many endless wars,” said David Segal, executive director of the progressive advocacy group Demand Progress, “But anything less than using the NDAA to ensure an end to our involvement in the Yemen war would belie these claims.”

Khanna told The Intercept he will refuse to vote for an NDAA which continues to fund the war. “If my Iran and Yemen provisions are not included in the final NDAA, I, and many other progressives, will oppose this large of a price tag,” Khanna said, referring to military spending. “That’s all there is to it.”

Sen. Bernie Sanders, I-Vt., who with Khanna has been agitating for years against Saudi Arabia’s war, called on his colleagues to seize the moment. “Let me be clear: It is Congress, not the president, that decides whether to go to war,” he told The Intercept, “Now it is time to stand up to this president and block every nickel of taxpayer money from going to this illegal war. Without U.S. support, the Saudi bombings on innocent civilians could not continue.”

For their part, Khanna and Sanders are pushing hard on their Democratic Party colleagues. The two members of Congress released a video on Wednesday pressing fellow members to not cave on the demand to revoke funding for the Yemen war.

In the video, produced by the Sanders office, Khanna points to the NDAA amendment as a decisive test for House Democrats, stating unequivocally: “Progressives will not support the National Defense Authorization bill if we do not have this amendment that brings the war in Yemen to an end.”

Still, they may face obstacles from a few Democratic members. Several progressive Hill staffers, who asked for anonymity because they weren’t authorized to speak on the record, expressed worry that Democratic leadership would trade away some of the Yemen language, which is precisely tailored to cut funding for forms of U.S. assistance that are essential to the Saudi aerial bombardment. If, for example, the final bill only prohibits in-air refueling of Saudi jets — a practice which has already been suspended — without banning spare parts transfers and logistical support, the measure might not actually ground any warplanes.

Some key Democratic decision-makers have shaky records on Yemen. Reed, the ranking member on the Senate Armed Services Committee, was one of handful of Democrats, along with Sens. Joe Manchin of West Virginia, Chris Coons of Delaware, and Doug Jones of Alabama, to vote against the Yemen War Powers Act in 2018. Reed has faced pressure and frequent protests in his home state for his hawkish voting record and coziness with the arms industry. In September, a bomb made by Raytheon — a Massachusetts-based arms manufacturer that gives heavily to Reed’s campaigns in neighboring Rhode Island — killed six Yemeni civilians, including three children.

This year, Reed voted in favor of the Yemen War Powers resolution, and activists take credit for his change of heart. But they worry he may betray them in closed-door negotiations over the NDAA. “Jack Reed has always been someone who goes the way the wind is blowing,” said Jonathan Daly-LaBelle, a 50-year-old Rhode Island resident whose anti-war citizens’ group has frequently targeted Reed. “We’ve been able to push him in the right direction on these issues. But I don’t know if he’ll stand by us behind closed doors. If he doesn’t, well, that’s what primaries are for.”

Similarly, Smith had to be pushed by a primary challenge from his left to take a stronger stand against the Yemen war.

Despite some wavering members, the Yemen amendment has some establishment support among Democrats. Both Senate Minority Leader Chuck Schumer, D-N.Y., and House Speaker Nancy Pelosi, D-Calif., have expressed support for it, though neither has declared that they would join Sanders and Khanna in blocking an NDAA without the measure.

In a statement to The Intercept, Schumer blamed “Republicans and the Trump administration” for blocking the bipartisan effort to defund the war. “The conflict in Yemen is a humanitarian catastrophe, exacerbated by Saudi Arabia’s intervention and its reckless tactics,” Schumer said. “The war must be brought to an end.” On the Tuesday before Thanksgiving, Schumer tweeted, “The final defense bill should include the provisions on ending the war in Yemen.”

In an indication of the rising tide of liberal and Democratic discontent with the Yemen war, efforts to stop American involvement have also gotten support from an unlikely source: the very Obama administration officials who were for so long responsible for U.S. support to Saudi Arabia’s campaign. A group of former Obama administration national security officials issued a letter last month calling on Democratic leaders “to hold firm and work together” to ensure the must-pass NDAA retains the language in the Khanna amendment. The signees, which included Ben Rhodes, Samantha Power, and Susan Rice, wrote that it was “critical that Congress now utilize its ultimate leverage—the power of the purse—to effectively override Trump’s veto enshrine its will into federal law, and prohibit all funds from going to this war.”

Meanwhile, the war continues to cause unfathomable suffering. Tens of thousands have been killed, 3 million are displaced, 10 million are on the brink of famine, and 24 million — some 80 percent of the population — are in need of humanitarian assistance. Most Yemenis lack access to safe water and sanitation, helping to spread waterborne diseases to hundreds of thousands. The United Nations has said that the conflict is the worst humanitarian crisis in the world, and UNICEF says Yemen has become a “living hell” for children.

“The Democrats have moral authority, procedural power, and bipartisan majorities on their side,” said Segal, of Demand Progress. “If they let the NDAA go through without these provisions intact it will amount to a demonstration of cynicism or learned helplessness that could cost hundreds of thousands more lives.”