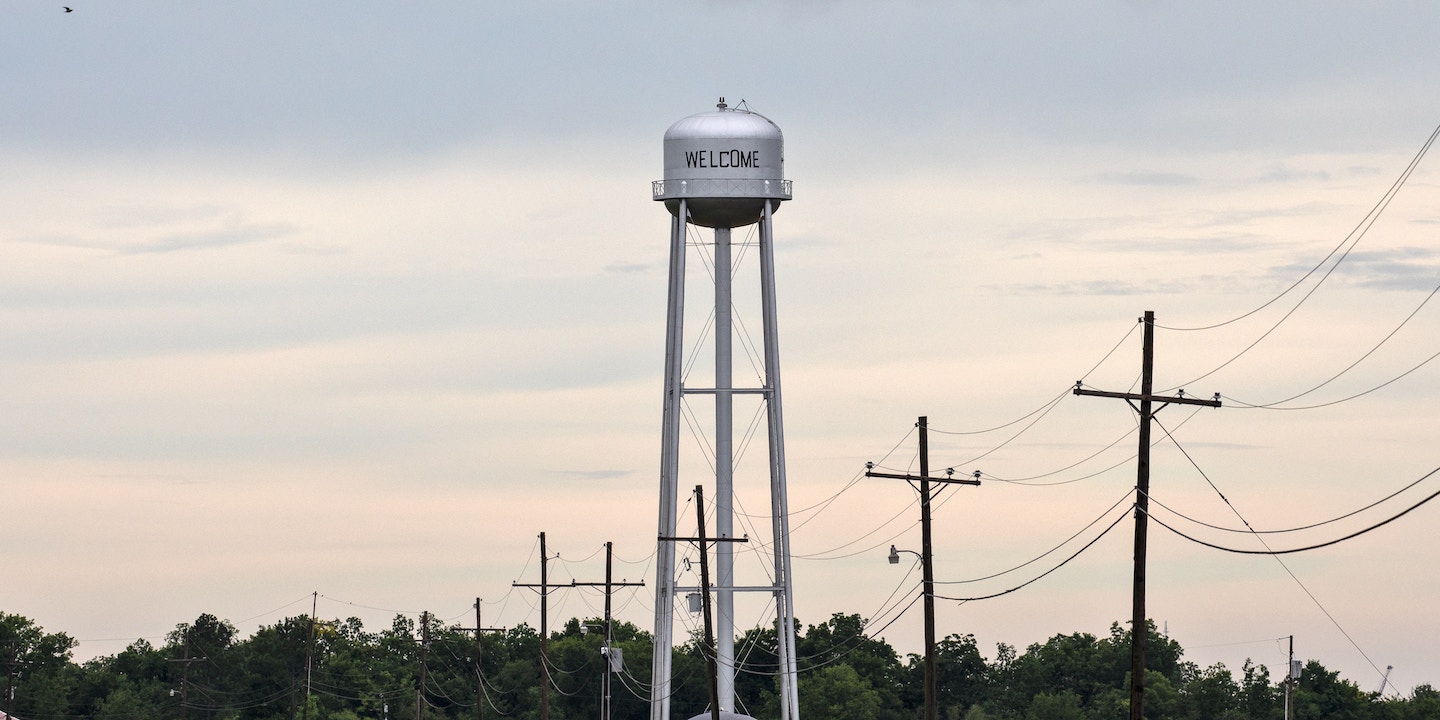 A former burial ground thought to contain the remains of slaves has been identified on a Louisiana property where a massive plastic production complex is sited to be built. Human remains along with evidence of grave shafts were identified on land in the St. James Parish where a subsidiary of the Taiwan-based Formosa Plastics Group intends to build 14 facilities to produce plastic bottles, bags, car casings, and synthetic turf, among other products.

Many residents of the area, known as “Cancer Alley,” already oppose the construction of the almost 2,400-acre complex on the west side of the Mississippi River on the grounds that it will double the dangerous amount of toxic chemicals in their air and emit more than 13 million tons of carbon pollution each year, making it the biggest new source of greenhouse gas emissions from a petrochemical plant since at least 2012. The discovery of the burial site adds another layer to their outrage.

“That’s sacred ground,” said Sharon Lavigne, 67, of the plot now covered with sugar cane where people were laid to rest years ago. Lavigne has lived in the area all her life and founded the community group RISE St. James last year to combat the presence of polluting industrial facilities in the parish. “They’re saying they don’t care about your ancestors. They’re slapping us in the face.”

Like many other African American residents in the area, Lavigne believes that she is the descendant of slaves who worked on nearby plantations. Yet because of the lack of documentation of the lives — and deaths — of enslaved people, she doesn’t know the specifics of where they labored or were buried.

St. James resident Gail Leboeuf was able to track down the grave of only one of her grandparents. She found out that her maternal grandmother was buried on the former Monroe plantation, which is now occupied by a Shell Refinery. She visited the site last year when an African American museum held a ceremony to honor the people buried there. Because some of the graves were marked with stones, it seems likely that they were dug after the Civil War.

While it brought some relief to know where her grandmother was laid to rest, Leboeuf said she found it galling that a giant petrochemical company is at once polluting the area and restricting access to her family’s remains. “My grandmother wasn’t a slave. But she’s a slave now on the Shell plantation.”

In an emailed statement, a spokesperson for Shell acknowledged that there are two cemeteries on Shell’s property adjacent to the refinery and said that “for the safety and security of both visitors and the agricultural farmers on the adjacent property, visitors are asked to contact the Refinery for access to the property for visitation. Since Shell dedicated the cemeteries nearly two years ago, there has not been a single person denied access to visit.”

In an emailed response to questions from The Intercept, Janile Parks, Director of Community and Government Relations for FG LA LLC, a subsidiary of Formosa Plastics, wrote that “Upon confirmation of the Buena Vista burial site’s location, and per direction from [State Historic Preservation Office], FG fenced in the identified area to protect it. Pending permit approvals and throughout project construction, FG will remain in compliance with the U.S. Army Corps of Engineers, SHPO and all other applicable state and federal requirements to ensure the site remains protected.”

Parks also wrote that “FG is respectful of the historical burial ground on its property and remains committed to cooperating with the State Historic Preservation Office (SHPO) to protect it. In regard to the Buena Vista site and the possible Acadia site, FG has worked with the proper state and regulatory authorities every step of the way and will continue to do so.” 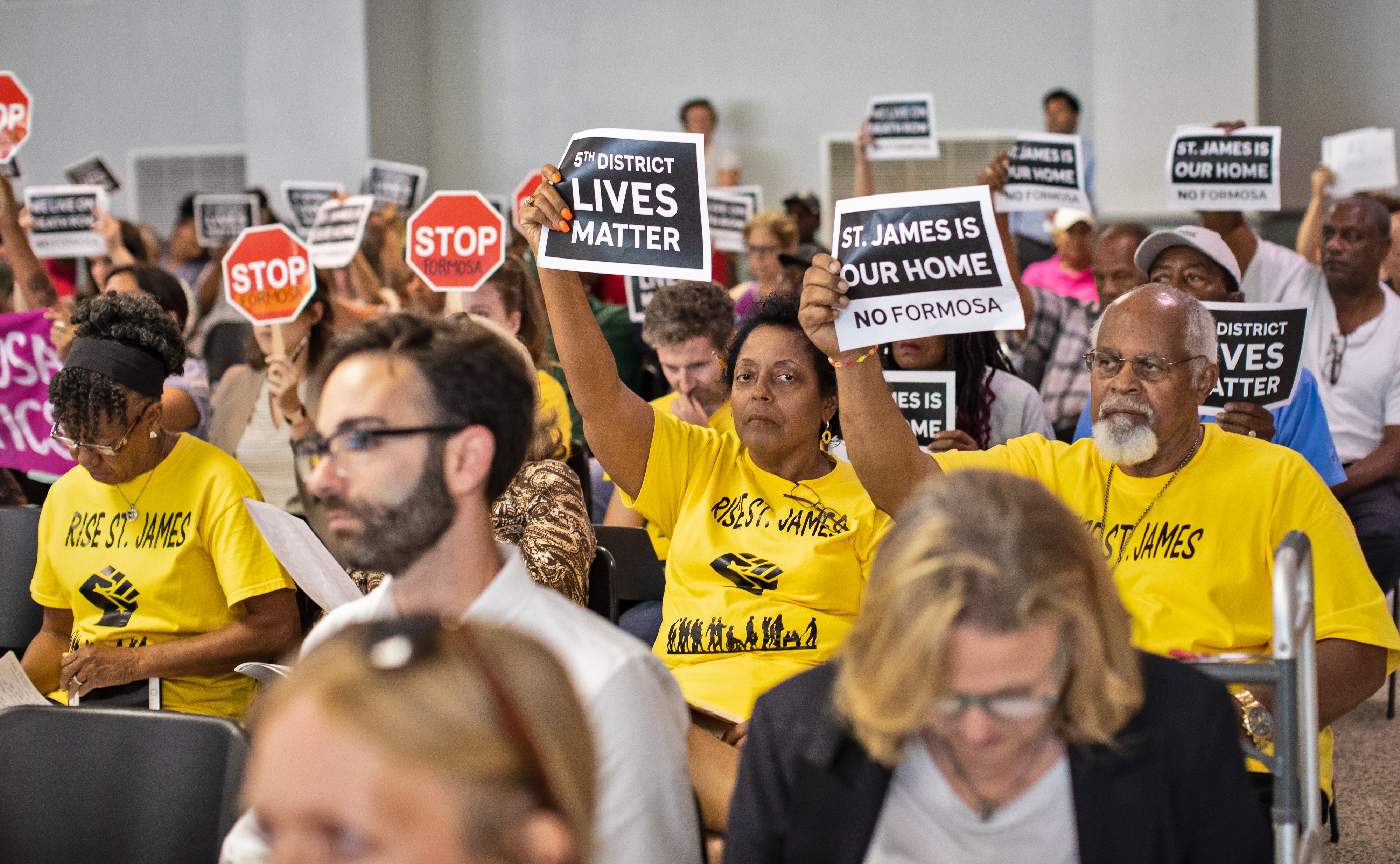 Sharon Lavigne, center, the director of RISE St. James, sits with her brother, Milton Cayette Jr., at Louisiana’s Department of Environmental Quality’s public hearing on whether to approve the 15 air permits for Taiwanese company Formosa Plastics in Vacherie, La., on July 9, 2019.

The records of the slaveowners are far more clear. The giant chemical complex, which Formosa is calling the Sunshine Project, is to be built on several former plantations, including Acadia, whose long series of white owners is traceable through land use records, and Buena Vista, where the number of hogs that Benjamin Winchester and his wife, Carmelite Constant Winchester, raised in the 1840s was carefully documented (between 600 and 700).

The burial site is on what was the Buena Vista plantation and was confirmed in a June report written by an environmental consultant hired by Formosa Plastics Group called TerraXplorations Inc. and obtained through the Texas public records law by the Center for Constitutional Rights, a nonprofit legal group that is representing RISE St. James. The consulting company did an archaeological investigation of two sites on the Formosa property and found that the Buena Vista cemetery contained evidence of four human remains, eight potential grave shafts, and 14 posts or post holes. Among the objects found at the site were bones (including a crushed skull), wood fragments, and coffin nails. The consulting company did not find human remains on the other site and concluded that any possible burials there “have been destroyed by previous land use activities.” Because there are records of the plantations’ owners being buried elsewhere, the people who were buried at the Buena Vista cemetery are thought to be the slaves who worked on the plantations.

While the report confirmed the existence of the burial site in June, a consultant for the Formosa Plastics Group appears to have known that cemeteries of enslaved people were likely on the site as early as July 2018, according to emails the Center for Constitutional Rights obtained from the Louisiana Division of Archaeology. That month, an archaeologist for Cox/McLain Environmental Consulting Inc., which was serving as a consultant to Formosa, emailed with Louisiana State Archaeologist Charles McGimsey about a 1877-1878 map the state had obtained from an independent researcher that showed evidence of two burial grounds on the Formosa site.

In August 2018, an attorney for Jones Walker named Marjorie McKeithen who was representing Formosa laid out two possible options for the company, according to the emails. The company could fence off the area and mark it with a plaque to prevent any further construction disturbance or remove the human remains and relocate them to another cemetery. McKeithen acknowledged that fencing off the area “would mean that portions of the planned Utilities Plant may have to be relocated, which makes this a very difficult option” for Formosa.

In comments submitted to the Louisiana Department of Environmental Quality on Wednesday, the Center for Constitutional Rights argued on behalf of RISE St. James that prior knowledge of the burial site — and the fact that Formosa didn’t share it with community members or the St. James Parish Planning Commission, which approved Formosa’s land use application in 2018 — is justification for the state environmental agency to deny Formosa the 15 final permits the company needs to begin construction of the complex.

The comments submitted to LDEQ raised concerns that there are additional burial grounds on the Formosa site. If there are — and they were destroyed by the construction of the plastics complex — “it would cause immense, irreversible harm to the human dignity of historically enslaved people and would be an unforgivable affront to their descendants and communities in the region, including RISE St. James.”

The Center for Constitutional Rights demanded that LDEQ deny Formosa’s permit applications, thoroughly investigate the possibility of additional slave burial grounds on the site, and attempt to identify the human remains that have been found “as custodians of the legacy of locally enslaved people and carriers of their remarkable stories of survival and unbreakable human dignity against unspeakable odds.”

“The vast majority of the industrial facilities in ‘Cancer Alley’ are on the grounds of former plantations.”

The former plantations that Formosa bought in July 2018 are not the only properties once owned by slaveholders that have gone on to become chemical or oil and gas plants. Down the Mississippi River from the Formosa site, Marathon Petroleum’s Garyville pipeline station sits on the former San Francisco plantation. The company’s tanks are visible from the window of the ornate kitchen in the restored plantation house.

In St. Bernard Parish, PBF Energy’s Chalmette plant was built on a former plantation. In St. John the Baptist Parish, DuPont built its big neoprene factory, which is now partially owned by the Japanese company Denka, on a former sugar plantation called Belle Point. And across the river from the Formosa site, land that was once the Uncle Sam sugar plantation is now occupied by Mosaic, a company that produces synthetic fertilizer and has created a 960-acre waste pile and a giant lake of more than 700 million gallons of highly acidic water.

“The vast majority of the industrial facilities in ‘Cancer Alley’ are on the grounds of former plantations,” said Justin Kray, an independent researcher who has been using maps and aerial photography to trace the history of property ownership in St. James for two years. “The areas where large petrochemical companies want to locate are large, undivided tracts of land. And these are the undivided tracts.”

Dangerous emissions from petrochemical company development along the Mississippi River between New Orleans and Baton Rouge earned the area its nickname “Cancer Alley” in the 1980s. In the past few years, a second wave of industrial development fueled by the fracking boom has been transforming the region.

As development and dangerous pollution have increased, and as Lavigne of RISE St. James has been working to call attention to it, three of her close colleagues — Geraldine Mayho, Keith Hunter, and Lynn Nicholas — have died.

The planned Formosa complex, which is one mile from an elementary school, is permitted to release more than 800 tons of hazardous air pollutants per year. Among the chemicals the complex will release is ethylene oxide, a carcinogen that has raised cancer risk in more than 100 census tracts around the country.

Recognition of the local risk led to the recent closure of plants that emitted the chemical in Georgia and Illinois. But Formosa’s St. James complex is permitted to release 7.7 tons of the cancer-causing gas each year.

“While the rest of the country is trying to reduce or eliminate ethylene oxide emissions, this state is creating a brand-new toxic problem,” said Corinne Van Dalen, a staff attorney at Earthjustice, which submitted comments to LDEQ on the proposed facility on behalf of a number of environmental groups, including RISE St. James, Louisiana Bucket Brigade, Sierra Club, Center for Biological Diversity, Healthy Gulf, Earthworks, No Waste Louisiana, and 350 New Orleans.

As with the other pollution in the area, the brunt of this toxic problem will fall on the African Americans descendants of the enslaved people who worked — and were buried — on the plantations where the plastic complex will be erected.

This article has been updated with a statement from FG LA, LLC that was received after publication.