Members on both sides of the aisle were unimpressed with classified briefings and disputed the Trump administration’s legal rationale for the assassination. 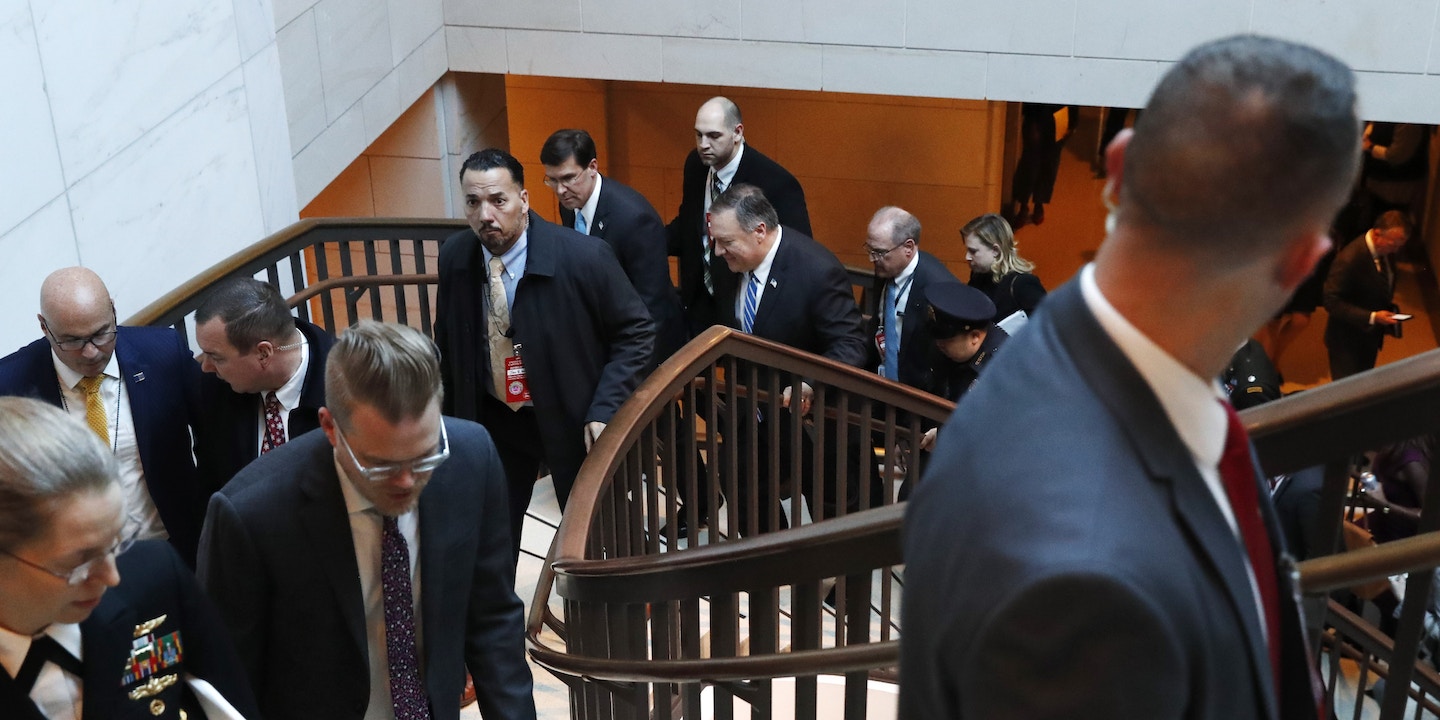 Following classified briefings in the House and Senate, members of Congress said the Trump administration had failed to present evidence that the assassination of Iranian Maj. Gen. Qassim Suleimani had averted an “imminent threat” to Americans in the Middle East.

“We did not get information inside that briefing that there was a specific, imminent threat that we were halting through the operation conducted last Thursday night,” Sen. Chris Murphy, D-Conn., told reporters. “And I can say I was surprised and saddened to not have that information before us, I think it is likely because it doesn’t exist.”

Senate Minority Leader Chuck Schumer told reporters that 97 senators attended the briefing, and 15 got to ask questions. “There were so many important questions that they did not answer,” said Schumer of Wednesday’s briefers, Defense Secretary Mark Esper, Secretary of State Mike Pompeo, CIA director Gina Haspel, and Gen. Mark Milley, the chair of the Joint Chiefs of Staff.

“As the questions began to get tough, they walked out,” Schumer said. “I’ve asked for a commitment that they all come back within a week; we have not gotten that commitment.”

This was the Trump administration’s first briefing to all members of Congress on the operation, which was carried out last Thursday. It comes after Iran retaliated Tuesday night by firing ballistic missiles at an Iraqi military base, which houses some U.S. military personnel. President Donald Trump announced in remarks Wednesday morning that no Americans or Iraqis had been killed in the Iranian strike. The Pentagon suspects that the Iranians intentionally avoided killing people, according to news reports.

The claim that the assassination was in response to a forthcoming “imminent threat” to American troops or diplomats in the region has been central to forming the Trump administration’s legal justification for the operation.

After the operation last week, Pompeo told CNN that Suleimani was plotting an action that would put “dozens if not hundreds of America lives at risk.” Esper told reporters this week that it was “more fair to say” that the threat was “days,” as opposed to weeks, away. But when asked for details this week about what the imminent threat was, Pompeo sidestepped the question by referring to a previous December 27 rocket attack by an Iranian-backed militia in Iraq that killed an American contractor.

Reactions from Democrats in the House were similarly critical of the lack of evidence Trump apparently had before ordering the assassination.

“Every time we were told, ‘Absolutely, there was an imminent threat you should just see the information, it’s really imminent.’ And nothing was shown to us,” said Rep. Mark Pocan, D-Wis., at a news conference following the House briefing. “Over and over and over the question was asked. And nothing more was given to us about this.”

House Speaker Nancy Pelosi announced on Wednesday that the House will vote on a war powers resolution that would direct Trump to terminate any hostilities by U.S. armed forces against Iran, unless Congress authorizes them.

Even some Republican senators, most prominently Utah Republican Mike Lee, said they were open to a war powers resolution after the briefing, which Lee found infuriating in its lack of specifics. “I walked into the briefing undecided; I walked out decided,” said Lee. “Specifically because of what happened in that briefing.”

Fox News cut away from Lee as he told reporters that the briefing was “probably the worst [briefing] I’ve seen, at least on a military issue, in the nine years I’ve served in the U.S. Senate.”

Hawkish members of the Republican Party stood by the reasoning presented by the Trump administration. Speaking to reporters afterward, Sen. Marco Rubio, R-Fla., cited a “string of intelligence that shows there was ‘near-term planning’ at a different level than what we have seen in the past.”

“Combined with recent in events, just in the last couple months, an increase not just in the volume of attacks but in the lethality of the weapons they chose to use, combined with that string of intelligence, combined with the fact that he was traveling across the region, all of it put together combined with the fact they had just tried to storm our embassy, you put all of that together and you reach the reasonable conclusion that something really bad could happen in the near term, and if we don’t act now, dozens if not hundreds of Americans could die,” Rubio said.

Members of Congress also said that the briefers invoked the 2002 Authorization for the Use of Military Force Resolution as the legal basis for the strike. The resolution, originally passed 17 years ago, was meant to sanction military force against Saddam Hussein’s government, and the text of it only authorizes force to defend “against the continuing threat posed by Iraq.”

Rep. Barbara Lee, D-Calif., told reporters following the briefing that it was unacceptable for the 2002 AUMF to serve as the legal basis for the strike against Suleimani. “First of all, probably less than 25 percent of members of Congress here today were here in 2002,” Lee said. “Which means they have not had the opportunity to voice their opinion or cast their vote for any authorizations to use military force for their constituents.”