Records show that the California Farm Bureau has been working behind closed doors to limit legal exemptions for Direct Action Everywhere’s open rescues. 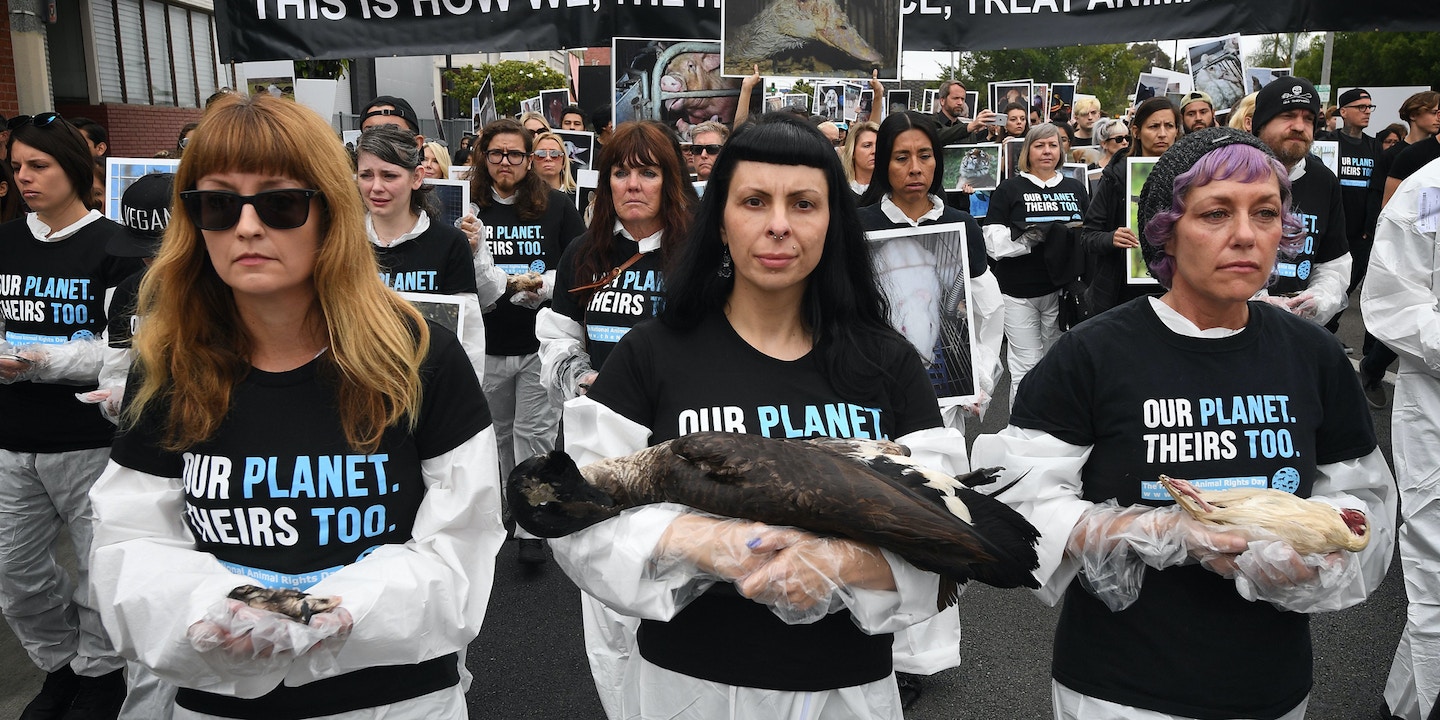 The California Farm Bureau Federation, the powerful agribusiness trade group, along with its local affiliates, has pushed for aggressive policing and prosecutions of Direct Action Everywhere, or DxE. Now, records obtained by The Intercept show that the California Farm Bureau worked behind closed doors to limit legal exemptions that DxE has long claimed provide protections for its work.

DxE, which is based in Berkeley, California, has waged a provocative campaign of civil disobedience in recent years, staging actions that the group calls “open rescues,” in which volunteers brazenly walk into meat plants and seize animals, many of which are facing slaughter, often ferrying them to medical tents erected outside the facility or to local veterinarians.

The actions, which have included rescues at meat and egg plants over the last two years in Sonoma County, have seized headlines and drawn national attention to the organization’s cause — while mobilizing opposition within the factory farming industry. DxE has claimed that its actions are protected under an obscure section of state law, California Penal Code §597e, which authorizes individuals to enter pounds to provide nourishment for neglected animals.

In DxE’s view, the statute allows legal entry into an area in which animals are confined if the animals have been deprived of food and water for over 12 hours. The group consulted with Hadar Aviram, a professor at the University of California, Hastings College of the Law, to develop a modern legal interpretation of §597e, which was originally passed in the 1870s and has rarely been cited in court. In DxE’s view, any commercial animal agriculture site constitutes a pound, given that the term simply refers to a facility for confined animals, a standard that is reflected in eight states with similar statutes.

That argument has enraged the animal agriculture interests throughout California, which have leaned on authorities to take a more aggressive response to DxE.

“In my view, what they are doing is bordering on terrorism involving the use of illegal practices to push their points of view,” said Tawny Tesconi, executive director of the Sonoma County Farm Bureau, an affiliate of the California Farm Bureau Federation, in an interview with KSRO radio host Pat Kerrigan. Following an action in which hundreds of DxE activists entered an egg farm in Petaluma to free chickens and care for them in medical tents set up around the facility by the group, Tesconi called for farmers to “work more closely with law enforcement and the DA’s office to provide the tools they need to fully prosecute actions like this.” (The police, notably, euthanized many of the chickens, which were found by veterinarians to be starving and unable to walk from being bred in sheds with thousands of birds.)

Behind closed doors, the California legislature moved last summer to redefine §597e, adding language to the code that explicitly exempts factory farms. The legal shift received virtually no attention or substantive legislative debate. The legislation that made the change was sponsored by Assemblyman Vince Fong, R-Bakersfield, whose bill, AB 1553, was presented as a “technical, nonsubstantive” change that required a lower threshold of scrutiny. The bill sailed through committee and was signed by Gov. Gavin Newsom last June.

DxE strongly disputes that the bill was merely a technical change and was shocked to discover the discreet push to amend the code. “Over one hundred activists have relied on §597e to protect them from politically-motivated prosecutions,” said DxE co-founder Wayne Hsiung, who is also a former visiting law professor at Northwestern School of Law. “We’ve obtained dismissal or diversion of charges in dozens of cases where people were trying to give aid to starving animals.”

Fong’s office and the Sonoma County Farm Bureau did not respond to multiple requests for comment.

The California Farm Bureau’s claim that the group acted merely as a neutral observer, and did not seek to limit the scope of §597e, appears unlikely given the group’s advocacy over the last year.

Robert Spiegel, a lobbyist with the California Farm Bureau in Sacramento, spoke at the Flamingo Resort & Conference Center in Santa Rosa last May to explain to farmers in Sonoma County how his organization had worked to respond to the threat posed by animal rights activists.

During his remarks, Spiegel referenced the interpretation produced by Aviram on behalf of DxE and informed the group that California Farm Bureau’s “senior legal counsel as well as other individuals in our operations” produced a counter-memo to dispute Aviram’s arguments. DxE shared a recording of Spiegel’s remarks and, using a records request, obtained a copy of Spiegel’s memo, which had been sent to the Sonoma County district attorney’s office as well as to other prosecutors in California.

The memo attempts to dispute DxE’s rationale for its use of §597e by claiming that even if animal farms are “pounds,” the group may not claim there is an “imminent threat” if they rely on past video evidence of abuse or deprivation.

Far from taking a neutral stance, the memo strongly suggests the California Farm Bureau’s lobbying team took an active role in shaping the interpretation of §597e.

Around the country, animal agriculture interests have worked carefully to criminalize similar forms of activism around factory farms, including hidden camera investigations. The Intercept previously obtained emails showing a bill signed into law in Idaho that provided criminal penalties for filming animal abuse at factory farms had been quietly authored by a dairy lobbyist — one of many so-called ag-gag laws enacted around the country. A federal judge later overturned most of the statute. Farm Bureau groups have worked to enact similar laws in Missouri, Iowa, Utah, and other states.

The California Farm Bureau wields significant influence in state politics. The group spends upward of $600,000 a year peddling influence in Sacramento with a team of eight in-house lobbyists, according to disclosures.

In 2018, the Sonoma County Farm Bureau, responding to a wave of open rescues, brought in a national farm industry group known as the Animal Agriculture Alliance to host seminars for farmers on how to push back against future DxE activism. The group has promoted ag-gag laws and in more recent years sought to pressure law enforcement to view animal rights activists as terror threats. The alliance relies on financial support from the American Farm Bureau, the California Farm Bureau’s national affiliate, as well as the National Pork Industry Foundation.

“The Farm Bureau wants to change §597e because it knows that factory farms routinely allow animals to starve to death,” added Hsiung. “It’s the result of a system that has operated in secrecy, and ruthless pursuit of profit, for decades.”