At the Iowa Debate, Bernie Sanders’s Most Vociferous Opponent Was CNN

Bernie Sanders took a beating from CNN moderators in the January Democratic presidential primary debate — the last one before the Iowa caucuses. 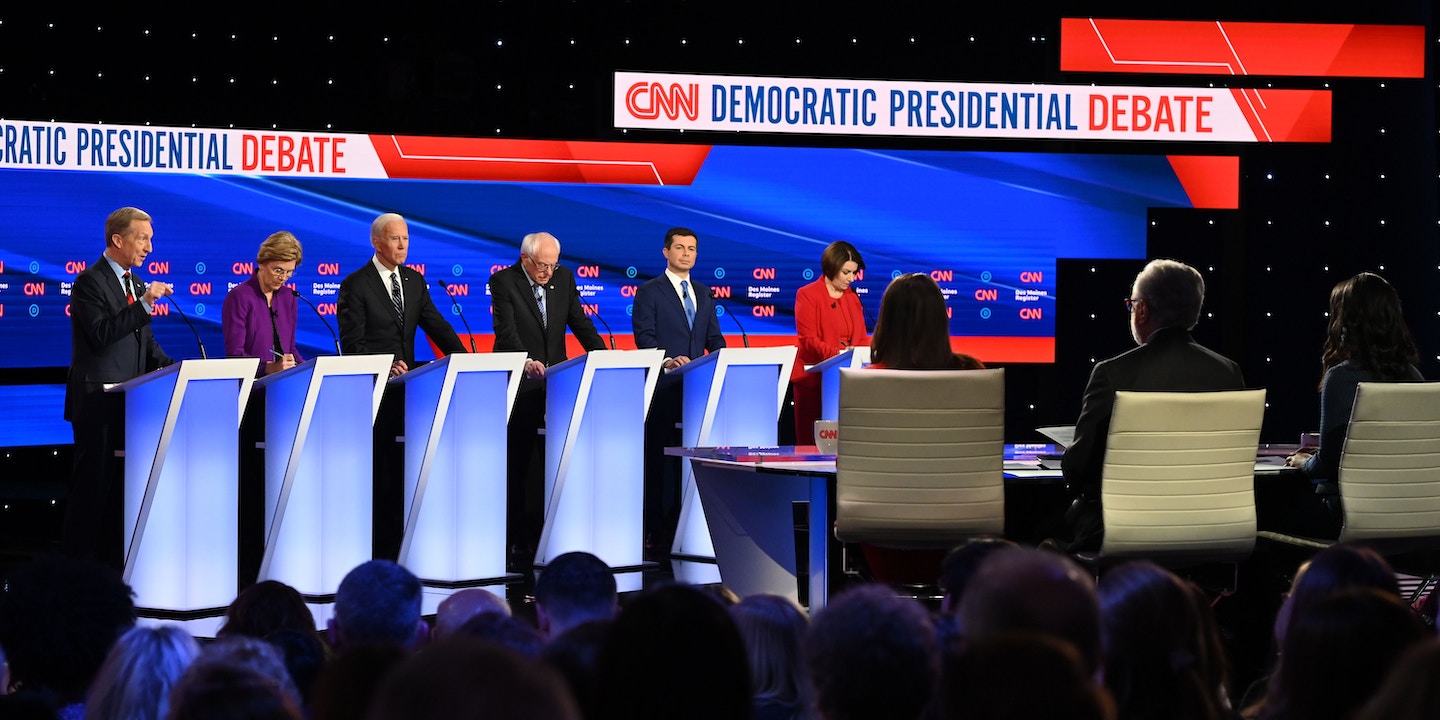 Ahead of the August 2015 Fox News debate, the company’s chair, Rupert Murdoch, issued a directive to debate moderator Megyn Kelly: The Donald Trump thing has gone on long enough, it’s time to take him down. Kelly took a bat to candidate Trump, listing off his most misogynistic remarks, asking how he could explain them to voters. But Trump ended up winning that war.

Democrats assembled in Iowa Tuesday night for the opportunity to take him on in the upcoming general election. This time, though, it was CNN moderators who brought out the bat and swung it hard at Sen. Bernie Sanders. The Vermont independent had topped a major Iowa poll last week, compounding fears that have only recently emerged among the party establishment that he may be on course for the nomination.

In contrast to Sanders’s treatment, former Vice President Joe Biden, the national frontrunner, was barely touched — either by moderators or his rivals.

CNN moderator Abby Phillip opened a line of questioning on the recent feud between Sanders and Sen. Elizabeth Warren: “CNN reported yesterday, and, Sen. Sanders, Sen. Warren confirmed in a statement that in 2018 you told her that you did not believe that a woman could win the election. Why did you say that?”

The moderator’s use of Warren to confirm a version of the story that originally came from Warren’s account of the meeting at the time signaled which side CNN was taking in the “he said, she said,” but it was confirmed by the framing of the question — “Why did you say that?” — rather than asking whether he said it.

Sanders denied the accusation, noting that he had been ready to stand aside for Warren to run in 2016, though she declined to. Phillip pressed to be clear he was denying the charge, then pivoted to Warren, and waved away his denial with such force — “Sen. Warren, what did you think when Sen. Sanders told you a woman could not win the election?” — that Sanders and the audience laughed.

After the debate, the candidates shook hands — all except Warren and Sanders. Warren pulled her hand back, and the two had a tense exchange that couldn’t be heard as the mics had been cut off, but left both walking tersely off, Sanders turning his back on Warren.

The debate opened with a long discussion of war in Iran and Iraq, which included no mention of the costs of occupation. Yet CNN moderators did eventually ask Sanders how he would pay for Medicare for All, among other plans. Host Wolf Blitzer asked why the government should do anything to lower drug prices when nobody trusts the government. Philip later asked Sanders how he would keep his plans “from bankrupting the country.”

The CNN hosts jumped in, telling Sanders to stay on trade because climate change would be addressed later. “They are the same in this issue,” he fired back.

In another moment, moderators interrupted Sanders as he sought to link his opposition to Trump’s newly negotiated U.S.-Mexico-Canada Agreement — setting himself apart from the rest of the field, particularly Warren — with calls for stronger labor protections and environmental provisions to address the climate emergency. “Aren’t moderate improvements better than no improvements?” asked Brianne Pfannenstiel, a Des Moines Register reporter and co-moderator. After Sanders explained his opposition, Pfannenstiel noted that the AFL-CIO supported the trade deal: “Are you unwilling to compromise?”

“The AFL-CIO does. The Machinists Union does not. And every environmental organization in this country, including the Sunrise organization, who are supporting my candidacy, opposes it,” Sanders said. That’s when the CNN hosts jumped in, telling Sanders to stay on the topic of trade because climate change would be addressed later. “They are the same in this issue,” he fired back.

One instance when Sanders did seem to triumph — and hit Biden — came at the outset of the debate, when moderators asked questions about the war in Iraq and the potential coming war with Iran. Sanders used the opportunity to hit Biden for his support of the Iraq War and to remind viewers that he opposed it, just as he opposed the Vietnam War. Biden, attempting to end weeks of rough press, ultimately acknowledged his vote for the war was a “mistake,” one he said he was hoodwinked into by the Bush administration’s claims that it did not intend to use the congressional authorization for the use of force to attack.

The Sanders moment, however, only came after Blitzer started a question to Sanders by saying, “Iran’s Ayatollah [Ali] Khamenei has again called for all U.S. troops to be pulled out of the Middle East, something you’ve called for as well.”

Despite the pummeling by moderators, a staffer for the Sanders campaign said it had its best fundraising hour of any debate thus far, with more than 15,000 contributions. The campaign said the donations, which totaled $1.7 million by the end of the night, accounted for 43 percent of all money raised on the Democratic fundraising site ActBlue during that period of time.