Nancy Pelosi Pushes the House to Pass USMCA, but Neglects a Bill With Broad Support to Strengthen Unions

The PRO Act, which has 215 co-sponsors, would be the most comprehensive rewrite of U.S. labor law in decades. Pelosi hasn’t brought it to the floor. House Speaker Nancy Pelosi has made no secret of her desire to pass the U.S.-Mexico-Canada Agreement by the end of the year, telling reporters recently that it would be her goal for the House to vote on it before Christmas. Centrist Democrats have been insisting privately that a quick passage for the trade deal is necessary for moderate members of Congress to win their competitive reelections in 2020, to show they can “do something.” Unions have made clear, though, that from their perspective, USMCA lacks real labor enforcement mechanisms, which could undermine the whole deal, further drag down wages, and eliminate more jobs.

Meanwhile, a top priority for labor has been sitting quietly on Pelosi’s desk and, unlike USMCA, already commands enough support to get it over the House finish line. The Protecting the Right to Organize Act would be the most comprehensive rewrite of U.S. labor law in decades. It would eliminate right-to-work laws, impose new penalties on employers who retaliate against union organizing, crack down on worker misclassification, and establish new rules so that employers cannot delay negotiating collective bargaining contracts. Introduced by Rep. Bobby Scott, D-Va., in May, it already has 215 co-sponsors in the House and 40 in the Senate.

The PRO Act passed the House Committee on Education and Labor on September 25 on a party-line vote. But two months later, Pelosi has still not moved to bring the bill to the House floor, nor has she given any indication of when she would. Her office did not return requests for comment.

“I don’t know exactly what the holdup is — it is taking longer than it should given the number of co-sponsors that we have,” said Rep. Pramila Jayapal, co-chair of the House Progressive Caucus. “Many other bills have come to the floor with fewer co-sponsors than this one.”

Jayapal told The Intercept that she believes that House leadership remains committed to the bill and that she and the Progressive Caucus have been pressuring them to bring it to the floor. “I think it is really critical for us as Democrats,” she said. “And anyone on the Democratic side who is wary of expanding collective bargaining I think should be thinking really clearly about why that would be.”

Rep. Mark Pocan, the other Progressive Caucus co-chair, said they’re working hard to make sure the bill gets calendared, but acknowledged that “there’s probably somewhat limited bandwidth” for the PRO Act given the intense focus on hashing out labor provisions in the trade deal, and the House’s desire to finish passing the drug-pricing bill.

“Because of that, we’re probably having a more difficult time getting an exact date. There’s a lot of work happening right now,” he said.

Dan Mauer, director of government affairs for the Communications Workers of America, told The Intercept that the delay to bring the vote to the floor has been “very frustrating” and that his union has made it clear to House leadership that members would be “very unhappy” if the House does not prioritize the bill by the end of the year.

“We get it’s hard, there’s a lot of stuff on people’s plates, and at the same time, this bill already has a lot of demonstrated support,” he said.

Randi Weingarten, president of the American Federation of Teachers, told The Intercept over email that her union is also urging Congress to pass the PRO Act before the end of the year. “Currently, employers have carte blanche to abuse their power and dissuade workers from joining a union, but consider the flipside — in cities and states with a strong union presence, wages, benefits, and job security are better across the board,” she said. “Congress can do something concrete to rebalance the ledger, and the time to act is now.”

A repeal of right-to-work would mean that states could no longer impose bans on unions charging private-sector workers mandatory fees for collective bargaining, even if they are not dues-paying union members. In 2018, the Supreme Court effectively nationalized right-to-work in the public sector when it ruled in Janus v. AFSCME that no fee or payment may be deducted from a public-sector worker unless the employee “affirmatively consents” to pay.

While Pelosi has voiced concern that the impeachment against President Donald Trump might distract from advancing the Democrats’ legislative agenda, she is not moving the PRO Act, which is in a strong position for passage. The legislation builds on the House Democrats’ 2017 “Better Deal” agenda, which included many labor commitments also laid out in the PRO Act. “We want to put this out to the public,” Pelosi said at the time. “Public sentiment is everything.”

Aside from having co-sponsors, public sentiment for unions is also at one of its highest points in the last 50 years, according to Gallup’s annual polling. Sixty-four percent of Americans approve of unions, up 16 points since 2009.

While the House did vote to raise the federal minimum wage to $15 an hour this summer, union advocates also felt that House leadership dragged its feet on bringing that bill to a full vote. It passed the House labor committee in March but didn’t come to the floor until July.

Meanwhile, the U.S. Chamber of Commerce, a powerful business lobbying group, is spending thousands of dollars ginning up opposition to the PRO Act, running ads on Facebook and Twitter. The chamber is also spending heavily on ads in support of USMCA, urging viewers to tell Congress to pass the trade deal. 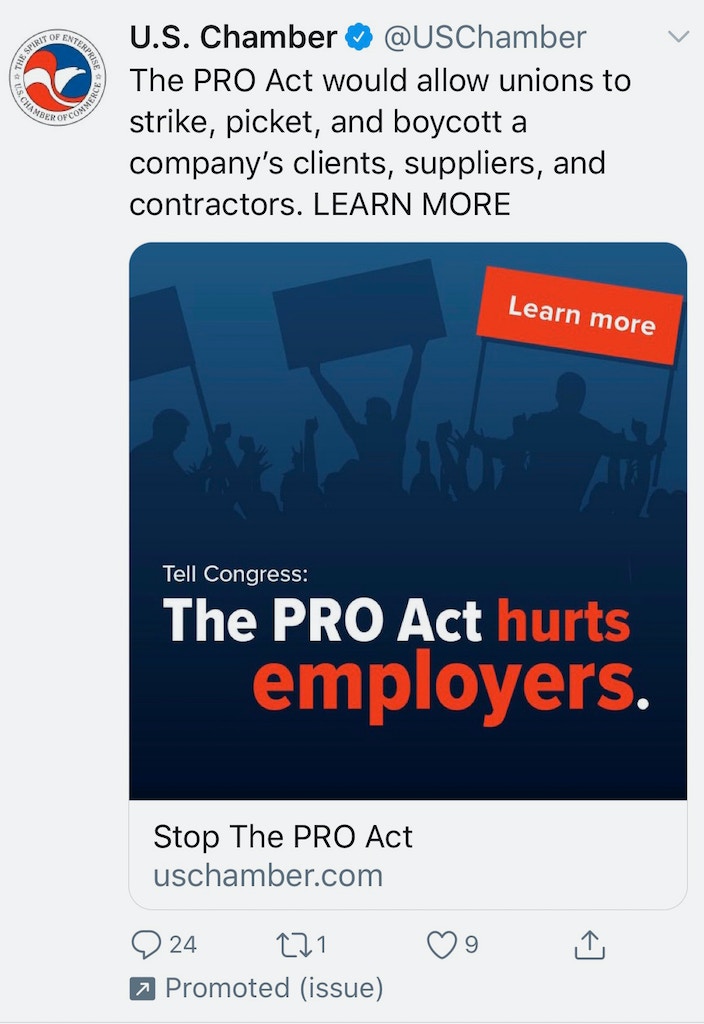 The U.S. Chamber of Commerce is advertising against the PRO Act on Twitter.

“I do worry that by delaying [on the PRO Act], we just give the chamber and others the opportunity to prevent passing this legislation,” Jayapal said.

The last time Congress was in a position to pass a major rewrite to labor law was in 2009, when Democrats unsuccessfully pushed the Employee Free Choice Act. Labor leaders disagree over why EFCA ultimately failed. Some blamed moderate Democrats, others blamed then-President Barack Obama, and still others chalked it up to a weak ground game from labor and progressives in holding Congress accountable in the face of intense corporate opposition. The death of Sen. Ted Kennedy, D-Mass, who was chair of the Senate labor committee and then succeeded by a Republican, surely didn’t help. Neither did aggressive lobbying by the chamber. “This will be Armageddon,” the vice president for labor policy at the Chamber of Commerce complained at the time.

Some unions appear more resigned to the idea that it’s already too late for the bill to pass this year.

“The Teamsters would love the PRO Act to be considered by the full House as soon as possible, although time is running short for that to happen in 2019,” a spokesperson told The Intercept over email.

AFSCME President Lee Saunders also praised the House for its efforts so far to support workers, but avoided saying that his union expects to see the PRO Act wrapped up by the holidays. “We expect progress to continue” on bills like the PRO Act, and the Public Service Freedom to Negotiate Act, which would bring labor reform to the public-sector workforce, he told The Intercept. “With this political and grassroots landscape, we have every expectation that our elected officials will give working people the freedom to shrink the widening wealth gap and the voice they need to strengthen their communities.”

Mauer of CWA was more direct in raising the potential consequences for not moving swiftly, pointing to the need to galvanize union members before the next election.

“If you want real strong worker excitement that will get union activists excited for 2020, this is what we need to get it; the PRO Act is really it,” he said. “We absolutely think this is a key thing, not just legislatively but politically.”