The answer is yes, which could be unsettling news on Wall Street. 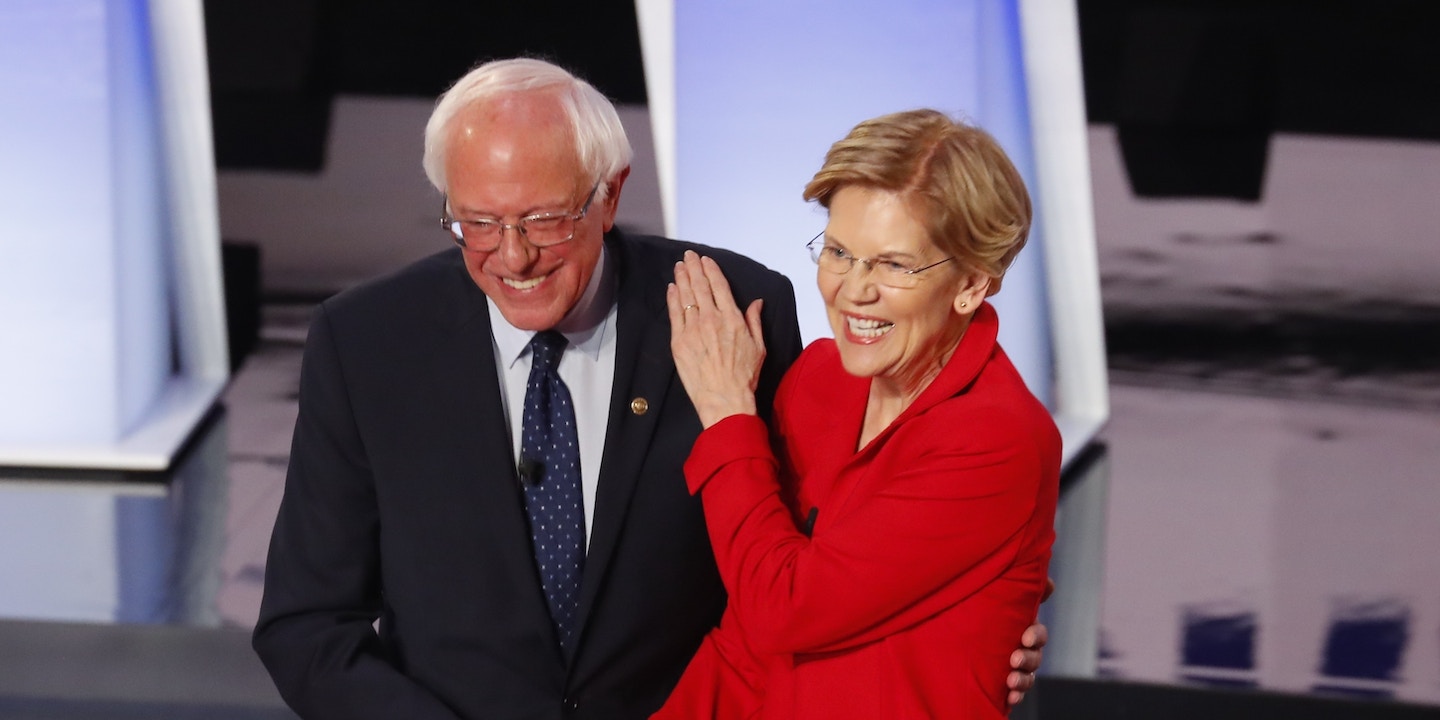 The presidential campaign of Sen. Bernie Sanders has researched the question of whether the same person can serve as both vice president and treasury secretary, according to three sources on the campaign. The person the Sanders campaign had in mind with the inquiry was Sen. Elizabeth Warren, his rival for the nomination and the bane of Wall Street over the last decade. The inquiry did not rise to the level of an official legal analysis undertaken by the campaign attorney.

The answer is yes: There is nothing in the Constitution that bars the vice president from also serving as treasury secretary. Sanders has made no final decisions on a potential running mate or cabinet officers and did not direct the inquiry, nor was he involved in it, as he considers such questions premature and presumptuous. “No conversations are happening about any positions in a potential Sanders administration. Our campaign is focused on winning the nomination,” said campaign manager Faiz Shakir. The research into the question of Warren’s dual eligibility reflects the political affinity that has long existed between the two — an affinity that was dealt a setback over the past week, as the pair clashed over the contents of a year-old private conversation. The sources were not authorized to speak publicly about internal deliberations. “Not only have I not written a memo, I haven’t had any phone calls, emails, or communications about it,” said Brad Deutsch, the campaign’s lawyer.

The research into the question of Warren’s dual eligibility reflects the political affinity that has long existed between the two.

Warren and Sanders have been allies since at least 2008, before she came to Washington to chair a panel with oversight of the Wall Street bailout. An author of books on the struggles of the middle class and an expert on bankruptcy law, she was invited by Sanders to a Vermont town hall, where the two talked about their shared agenda. Sanders was a strong supporter of her effort to create a Consumer Financial Protection Bureau in the wake of the financial crisis and privately lobbied President Barack Obama to name her the head of the new agency. Ideologically, Sanders and Warren are largely aligned when it comes to Wall Street, though Warren has concentrated more attention on bankers, meaning that the two different skill sets could complement each other in the same administration.

Warren, after her election to the Senate in 2012, lobbied for and won a seat on the Banking Committee, where she continued to hammer away at Wall Street and its feckless regulators. Warren’s is the type of oversight and policymaking Sanders could envision leading from the perch at the Treasury Department, sources said, with the added power of being vice president as well. Though no serious discussions have begun about a cabinet or running mate, the campaign wanted to know whether such a scenario was constitutionally permissible.

The news of the Sanders’s camp interest in a dual role for Warren comes after a week of tension between the longtime allies.

Not long after meeting with Sanders at the end of 2018 to discuss her impending presidential run, Warren hosted an off-the-record dinner with a number of journalists, according to sources with knowledge of it. At the dinner, Warren was asked about her meeting with Sanders, and in the course of the discussion, she relayed that Sanders had warned that he didn’t believe a woman could beat Donald Trump in 2020. Different reporters recalled the comments differently, a mirror image of the dispute between Warren and Sanders over exactly what Sanders said — with Warren saying that Sanders argued a woman couldn’t beat Trump, while Sanders said that he only said that Trump would weaponize misogyny against a woman, not that it would work. (The Intercept was not at the dinner. Most politicians hold informal, off-record dinners or meetings with journalists, though it’s not something Sanders is known to do. Occasionally details from those meetings leak, but it’s rare.)

From there, the piece of news entered the journalistic bloodstream, circulating among reporters as gossip but not finding its way into print. On Monday, it finally did, with CNN’s M.J. Lee reporting that according to four sources — described as “two people Warren spoke with directly soon after the encounter, and two people familiar with the meeting” — Sanders had told Warren, according to CNN’s paraphrasing, that “he did not believe a woman could win.”

It was widely assumed in the immediate aftermath of the story that Warren’s campaign had planted the story. Indeed, CNN anchor Erin Burnett said as much on air. But Burnett was merely making an assumption and had no inside knowledge of the sources, two CNN sources told The Intercept.

Since Warren told the story more broadly to a group of journalists, CNN’s sources could have come from outside the campaign.

On Monday, Warren told The Intercept that her campaign did not intentionally plant the CNN story. That Warren told a number of journalists about the meeting a year ago adds context to that statement. If Warren had only told her closest advisers about the meeting, then it would be logical to assume that her campaign dictated the timing of the story, dropping it just ahead of a debate, and just weeks before the primary, to undercut Sanders. But since Warren told the story more broadly to a group of journalists, CNN’s sources could have come from outside the campaign. The revelation does not rule out the possibility that someone in her campaign was a source, but it opens up other possibilities as well.

In chat groups and in private conversations with people outside the campaign, Warren aides have insisted that they were not the source of the leak and only learned about it in the midst of debate prep, contributing to the delayed response. The first time the campaign saw Sanders’s on-record denial was in print in the CNN story. “What I did say that night was that Donald Trump is a sexist, a racist, and a liar who would weaponize whatever he could,” Sanders said. After the story broke, the tension continued to escalate.

Neither camp took potential off-roads. Sanders could have allowed that since he had said that “Trump is a sexist … who would weaponize whatever he could,” he could understand how Warren may have inferred that he didn’t think a woman could overcome such obstacles. Warren could have said that she takes her friend at his word that he didn’t mean it, and the press could have moved on. Neither gave an inch, though, and Warren issued a blunt statement. “I thought a woman could win; he disagreed,” Warren said in her statement, that didn’t come until 7:30 in the evening, after the story had festered for much of the day.

In response to a great deal of questions we’ve had today, below is a statement from Elizabeth Warren: pic.twitter.com/PdBCHJQCJE

At the debate the next night, Sanders said it was “incomprehensible” that he would have said such a thing. Warren was prepared with remarks about the ability of women to win elections. After the debate, she confronted him on stage with cameras still running.

Since then, though, the camps have sought to deescalate.

Kristen Orthman, a spokesperson for Warren, declined to comment on the dinner, but said in a statement, “Everyone in this primary is focused and must be focused on our shared goal: beating Donald Trump. That’s the message we are sending to our supporters and our staff so we can make big, structural change to improve people’s lives.”

Shakir had a similar message. “Our message internally and externally is to stay focused, stay positive, and keep the people who are struggling out there and need transformational change at the front of our minds,” he said.

Update: January 18, 2020
This story was updated with comment from campaign attorney Brad Deutsch.