Fear Is the Democracy Killer, Not Hackers

An app caused problems counting votes in Iowa. But our attitude of assuming the cyber-worst at every cyber-turn will lead to a cynical electorate. 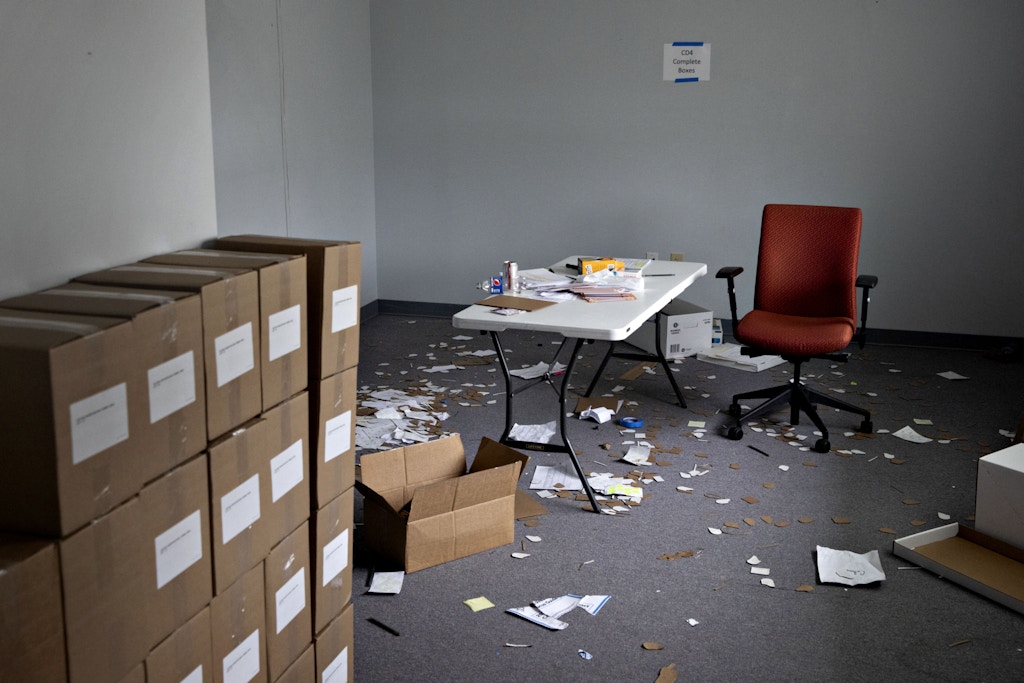 Papers cover the floor near boxes of voter registration forms inside an auxiliary Iowa Democratic Party office in Des Moines, Iowa, on Feb. 4, 2020.

Something changed, some synapses snapped deep in the American psyche, when it became perfectly normal to accuse someone who disagrees with you online of being a robot. The breathless, perpetually freaked out coverage of Russian social media spamming before the 2016 election birthed its own cottage industry; technology reporters, cable pundits, and bored Twitter users into battlefield correspondents overnight, deep in tweet-pocked trenches of “information warfare,” “misinformation ops,” and other themes at home in a late-career Tom Clancy novel. A buggy smartphone app, reportedly rushed into use, has been blamed by the Iowa Democratic Party for delaying the transmission of caucus results, expected Monday night, well into Tuesday afternoon. Whatever the screw-ups at the Iowa Caucus may turn out to be — malicious or merely stupid — that botched tallying process, and the loud reaction it has provoked, is indicative of a danger nearly as grave as whatever “cybersecurity experts” say concerns them: When you’re told over and over that we’re at Cyber War, everything is going to feel like an attack.

Using an app in any part of an election, particularly an app rushed together on a shoestring budget, is of course a bad idea. It’s a bad idea because literally anything on a smartphone can be tampered with given sufficient motivation, time, and resources. Any credible expert in the field of voting and electoral integrity will tell you that hardware and software should be kept to an absolute lo-fi minimum, for the simple reason that there’s almost always a way to hack a computer, but it’s quite harder to hack a thin sheet of tree pulp and ink.

But adding computer code to a caucus also allows for an outcome much likelier than a digital intrusion: hysteria, confusion, and civic nihilism. The American public has become so keyed up on reports of “Democracy is being hacked” that it feels similar to what 20 years of war on terror has done to our brains: Every popped balloon, stalled car, and curbside pressure cooker evokes fears of creeping jihad. Now every crummy app failure is going to give us pangs of techno-conspiracy too.

We risk the worst of all outcomes, a profound loss of faith in the electoral process.

Which isn’t to say this is mere paranoia. We know from federal prosecutors that Russian military intelligence did in fact breach VR Systems, a Florida-based e-voting vendor, before the 2016 election. Voting machines and the firms that sell them are a mess of incompetence and vulnerabilities, all exacerbated by our national thirst for instant results at any cost. So it’s still possible that there was some malign conspiracy behind the bungled caucus. But by turning from the simplest explanation for Iowa’s botched caucus — incompetent chummy democratic contractors cranking out a bad product to make a quick buck — and instead embracing a subplot from a William Gibson book, we risk the worst of all outcomes: a profound loss of faith in the electoral process and a defeated outlook in which we are always under attack. The Cyber Bad Guys are always peering from behind a corner, and your vote is just waiting to be hacked away. As a democracy it seems clear we can weather a barrage of low-resolution JPEGs being spewed out of St. Petersburg, but not so clear that we can survive a national assumption of conspiracy and chaos every time we hit a bump. Our default national attitude of assuming the cyber-worst at every cyber-turn won’t lead to stronger electoral systems that resist meddling, but a cynical electorate who can’t see the point in trying anymore.

In the end that may be the actual victory achieved by Russia: not altered results, not stolen votes, but an American voting public too anxious to think straight, driven mad by sprawling Twitter threads and screenshot theories. Iowa’s caucus is only the first failure in what will be a long, messy slog before November. If we continue to assume the worst (or listen to those who speculate on what could be the worst), it’s hard to imagine a greater gift for enemies of the American vote, at home or abroad.