Forty-one delegates are up for grabs in the satellite caucuses. Only the Sanders campaign invested in winning them. 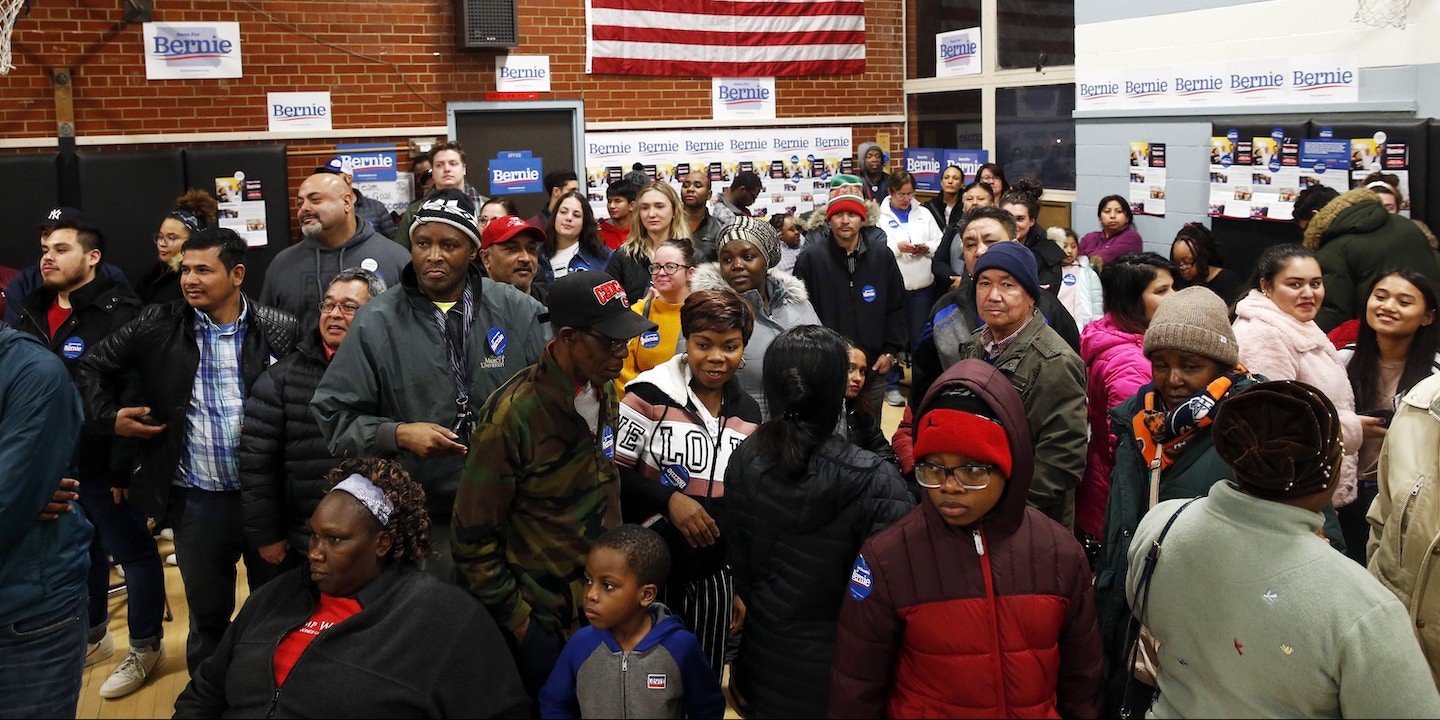 Heading into Iowa, Sen. Bernie Sanders had a mantra he used in his stump speech: If you turn on the TV on caucus night and they say turnout is high, we win. If they tell you that turnout is low, we lose. Simple as that.

Except, of course, it’s not that simple. On Monday evening in Iowa, turnout did not match the 2008 record set as Barack Obama, Hillary Clinton, and John Edwards battled it out. Yet, Sanders still won the most votes so far, both on the first and final ballots, even as the delegate total remains unsettled.

Asked Tuesday about turnout, Sanders told The Intercept that he would have preferred more. Sanders, noted that the numbers were “somewhat higher than in ’16,” when Sanders lost to Clinton by less than 1 percent of state delegates. But, he said, they were “not as high frankly as I would’ve like to have seen.”

Whether high turnout translates into success depends heavily on who turns out; a candidate has to increase turnout among the people most likely to vote for them. (Donald Trump, for instance, helped drive higher turnout among Democrats in the 2018 midterms, but that hardly can be counted as a victory for him.) Throughout the 2020 campaign, Sanders has targeted nontraditional voters, students, and working-class people who usually stay home during primaries and caucuses. As the campaign pointed out on Wednesday, turnout among 17-to-29 year olds went up, even from 2008.

The members of the Democratic establishment who could barely contain their excitement as they reported low youth turnout in IA were not only extremely disrespectful to this future of this party, they were wrong.

Kudos to @sunrisemvmt & all the other IA youth organizers! https://t.co/G7UProlQLs

In particular, the campaign focused heavily on bringing people out to the satellite caucuses that were held across the state and in other parts of the world for Iowans who couldn’t make it to the 7 p.m. caucuses. This was the first year the party hosted satellite caucuses, and no other campaign seems to have invested serious resources in turning those voters out. With 41 state delegates available to be swept up, and fewer than 25 delegates currently separating Pete Buttigieg and Sanders, they could end up making the difference when the delegate count is finalized.

The first caucus was held in Tbilisi, Georgia, of all places and reports are that Sanders led the delegates there. Another was held in St. Petersburg, Florida, where former New York City Mayor Michael Bloomberg is heavily on the airwaves. The first in Iowa was held at a UFCW union hall in Ottumwa, with Sanders winning all 14 of the final votes to net four precinct delegates, a relatively large pickup. At Drake University in Des Moines, workers and students went overwhelmingly for Sanders, giving him five delegates and Sen. Elizabeth Warren two, meaning that he netted five relative to Buttigieg. (On the Intercepted podcast, we interviewed voters at satellite caucuses and in Precinct 36.)

In all, there were 87 satellite caucuses. According to Iowa Democratic Party rules, the total delegate value of those caucuses will be determined by satellite turnout and in proportion to the total number of people who came out to vote in the regular caucuses. They are to be worth some percent of the total, meaning that the four delegates Sanders won in Ottumwa, for instance, could actually rise or shrink in the final analysis. But what we know about those caucuses suggests that Sanders may have won those caucuses by enough to overcome his deficit with Buttigieg, which at the time of writing sits at 23.987 delegates with 86 percent of the precincts reporting.

Jeff Weaver, a senior campaign adviser, said at a Sanders rally in New Hampshire on Tuesday night that he remained optimistic about winning not just the popular vote, but also the delegate count, citing success in the satellite caucuses. “If you look at satellite caucuses — we don’t have final numbers yet — if you look at new Latino voters coming out in Iowa, new Muslim voters coming out in Iowa, caucus sites in union halls, that’s part of this expansion of the electorate. It takes a while, but I’m very proud of the work we did helping underrepresented communities get represented in the caucus,” Weaver said.

The negative ads run against Sanders at the end of the campaign, he argued, could have depressed turnout. “We were trying to drive as high a turnout as we possibly could in Iowa. Who knows whether the fact that three people weren’t in state for a week, what effect that had on sort of like, the excitement level in the state. It’s impossible to know all the mix. Another thing that happened which was unfortunate was an outside Democratic group — I think really, on the Democratic side, maybe for the first time — came in with some really nasty advertising and frankly that tends to suppress turnout,” Weaver said.

Indeed, a number of factors unrelated to Sanders likely influenced turnout numbers this year. As Weaver mentioned, three of the top five (or perhaps top four, when the final votes are counted) candidates spent most of January stuck in an impeachment trial in the U.S. Senate, while one of the five did little campaigning. Only Buttigieg was able to hit multiple events per day for an extended period.

Also, turnout in 2008 — the record year, with 236,000 caucus-goers in a state of over 3 million people — benefited from some structural advantages: The caucuses were held on the first Monday in January, which meant college students were home for winter break, and workers who travel were more likely to be home as well. By the first Monday in February — the night after the Super Bowl — those students were back at their respective schools. In 2016, when Sanders and Clinton faced off, turnout dropped to 171,109. That’s a dip in roughly 55,000 potential Democratic voters. This year, Sanders was unlikely to gain those 55,000 voters back — since they had the chance to caucus for him in 2016 and didn’t.

Instead, the makeup of those 172,000 may have changed. At a largely black working-class precinct in central Des Moines, held at King Elementary School, Joe Biden had a level of support that was startling in comparison to his healthy polling numbers among African Americans. Of the 133 caucus-goers at Precinct 36, Sanders won 69 — more than half — while Biden was backed by just 25 percent. After a long struggle, Warren’s supporters were able to persuade enough Buttigieg backers to join them to barely hit the 15 percent threshold.

Working to turn out voters is no guarantee of victory. But in a close election, it can make all the difference. Or not.