It is unclear whether the campaign’s Facebook ads refer to Bloomberg’s personal spending or spending by his foundation. The latter would be legally risky. 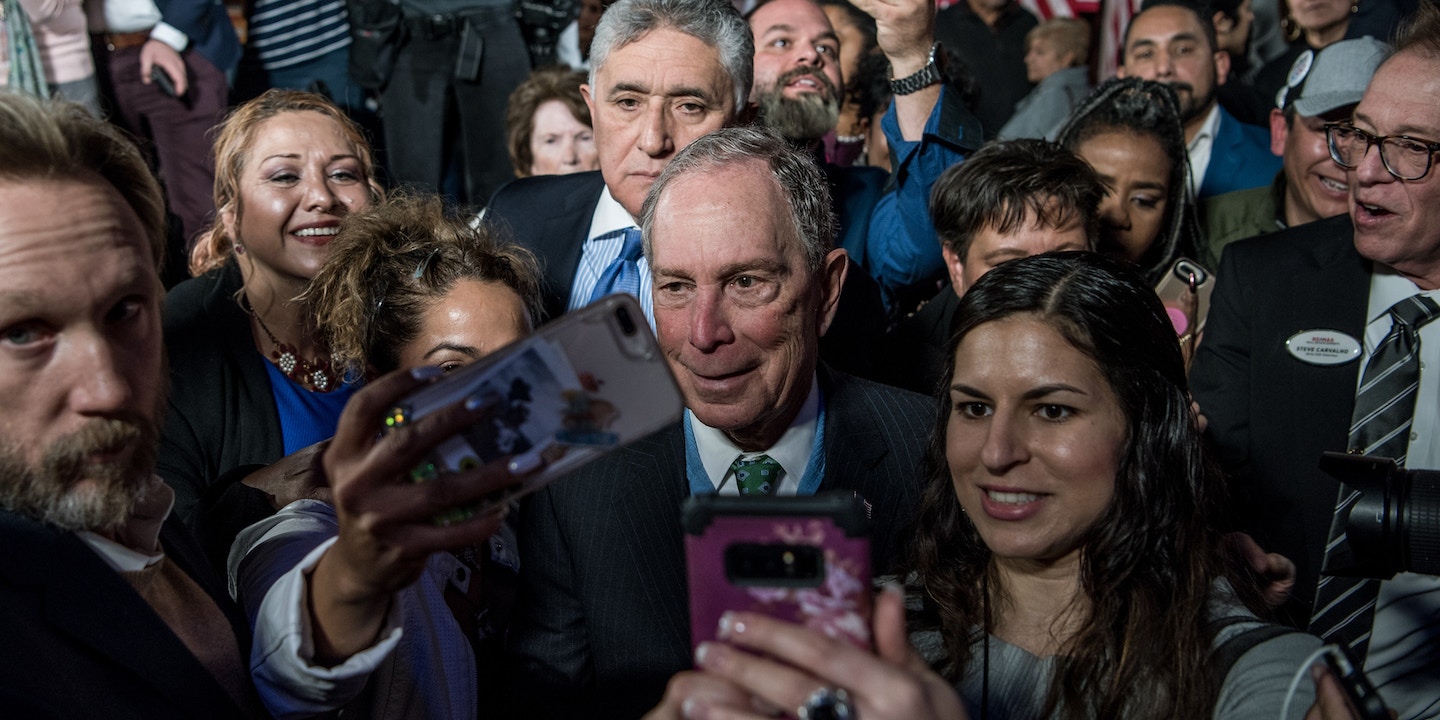 Billionaire Mike Bloomberg’s presidential campaign has been running targeted ads on Facebook inviting people to “tell him where his money should go.” Last week, in three separate ads targeted to California, Michigan, and Florida, the campaign issued the following appeal to potential voters: “EMERGENCY: Mike is planning his next round of climate crisis spending. Tell him where you think his money should go. We’re giving him a list of concerns next week.”

The California ads, which first appeared on January 29, were illustrated with blazing trees and text that said “OUR PLANET IS BURNING.” The ads were branded clearly with the Mike Bloomberg 2020 logo and read, “This can’t wait, California.” Clicking on the ad took viewers to a short, three-question quiz to “Prove to Trump that Americans understand the climate crisis” and to sign up for his campaign.

The Florida ads were largely the same, except depicting the ocean at high tide far up the shore, with text that reads “THE CLIMATE CRISIS DEMANDS ACTION.” The Michigan ads, which reference the Flint water crisis, were illustrated with dirty and clean drinking water, and read “EVERY HUMAN DESERVES CLEAN WATER.” Clicking the ad took viewers to a campaign petition demanding a plan to address the climate crisis.

Another ad that read “THE CLIMATE CRISIS IS AMERICA’S BUSINESS” ran in all three states. With an estimated net worth of over $61 billion dollars, Bloomberg stands as the 9th richest person in the world. Bloomberg Philanthropies, which governs all of his charitable giving, is the 12th largest foundation in the United States. In 2018 Bloomberg, a former New York City mayor, donated $767 million in charitable donations, including $458 million to his family foundation, a subset of Bloomberg Philanthropies. Environmental issues are listed as one of the foundation’s five core areas of giving.

Bloomberg’s personal wealth is also fueling his campaign, which he launched in November. By the end of December, he had already spent over $200 million on his candidacy, far outspending any of the other presidential candidates. He has already spent at least $47 million on Facebook and Google ads, and earlier this week, he announced that he would be doubling his spending on TV ads. He is not accepting contributions to his campaign.

It is unclear whether the campaign’s Facebook ads refer to Bloomberg’s personal spending or spending by his foundation. If the latter, campaign finance experts say the billionaire would be treading in legally risky terrain. The Bloomberg campaign did not respond to requests for comment.

“It’s great for wealthy people to have charitable foundations, but when the same person runs for office he or she must be scrupulous about keeping their 501c3 charity out of politics,” Ciara Torres-Spelliscy, an election law professor at Stetson University wrote in an email. “Under the tax laws 501c3s are not allowed to intervene in partisan fights.”

Donald Trump has gotten into legal trouble for mingling his foundation’s work with his 2016 presidential campaign. In January 2016, then-candidate Trump held a campaign fundraiser for veterans in Iowa, days before the state’s caucuses. The Donald J. Trump Foundation then gave Trump campaign officials full control in distributing the $2.8 million raised from the event, breaking laws around keeping conventional charities and political campaigns separate. New York’s attorney general launched an investigation and sued in 2018, charging the foundation with acting “as little more than a checkbook to serve Mr. Trump’s business and political interests.” The foundation shut down six months later, and this past November, a state judge ordered the president to pay $2 million in damages for misusing money raised by his foundation, including promoting his presidential bid.

Paul S. Ryan, the vice president of policy and litigation at Common Cause, a government watchdog group, said he sees no indication that Bloomberg has broken any laws, but that his “spidey sense is activated a bit.”

“At the very least this looks like using Michael Bloomberg’s history of charitable giving as a hook to grab attention and support for his presidential campaign,” he said. “But the ad itself is paid for by the campaign, so that’s appropriate, and puts him on safe legal ground.”

It also helps that the ads don’t specify if the money the ads refer to will come from Bloomberg’s foundation or, say, his personal checking account, Ryan said. “It implies he’s talking about his foundation but it doesn’t actually say that, which says to me, Mike Bloomberg has good lawyers and good communication staff.”

Still, Ryan added, it would help if Bloomberg were more transparent about what he is doing with his foundation now, and how many charitable entities he controls. “We are clearly dealing with a very wealthy individual who has the ability to build goodwill among the public, among specific political actors, in a way that will benefit his campaign,” he said. “Where things could get tricky or legally problematic is if he starts, or is in fact, using his foundation to build support and goodwill for his campaign. Trump seemingly ran afoul of those laws, hopefully Bloomberg will avoid those violations.”

The fact that he is able to appeal to potential voters by spending his vast personal wealth on issues they care about, Ryan said, is “another example” of how billionaires have an advantage in elections.