Chelsea Manning was imprisoned for refusing to testify before a grand jury investigating WikiLeaks. She refused — and now she must be set free. 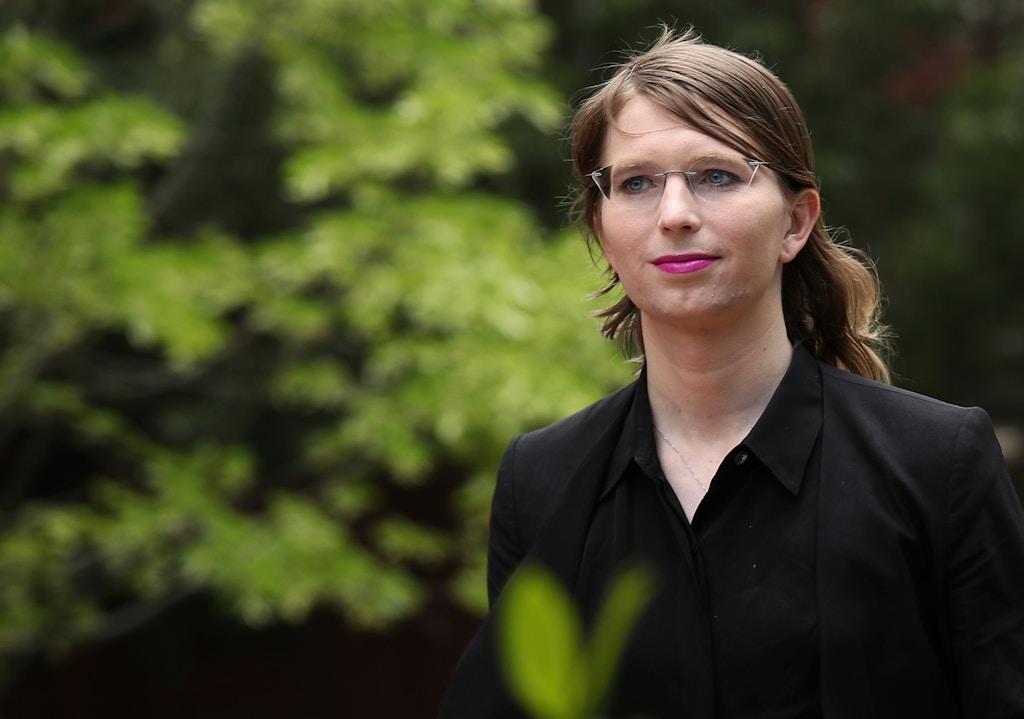 To observe Chelsea Manning’s actions over the last months is to know that she will not be coerced. She could have avoided her current incarceration at Alexandria Detention Center in Virginia, where she has been held for nearly a year. She could have freed herself at any point. She could have avoided accruing fines of $230,000 and counting. She could still avoid further days in jail and further crippling debts to the government. All she would have to do — all she ever had to do — is testify in front of the federal grand jury currently investigating WikiLeaks.

What has long been clear — no amount of jail time will coerce Manning into speaking — is now, surely, undeniable. The sole purpose of Manning’s detention has been to coerce her to testify, and it has failed.

On Wednesday, Manning’s legal team filed what’s known as a Grumbles motion in court, asserting that Manning has proven herself incoercible and so must, according to legal statute, be released from her incarceration.

“Should Judge Trenga agree that Chelsea will never agree to testify, he will be compelled by the law to order her release.”

It is a grim peculiarity of American law that a person who refuses to cooperate with a grand jury subpoena may be held in contempt of court and fined or imprisoned with the express purpose of coercing testimony, but when the coercive condition is absent, such incarceration becomes illegal. Wednesday’s motion directs Judge Anthony Trenga, who is presiding over the grand jury and Manning’s imprisonment, to accordingly recognize the illegality in this case.

“The key issue before Judge Trenga is whether continued incarceration could persuade Chelsea to testify,” said Manning’s attorney, Moira Meltzer-Cohen, on filing the Grumbles motion. “Judges have complained of the ‘perversity’ of this law: that a witness may win their freedom by persisting in their contempt of court. However, should Judge Trenga agree that Chelsea will never agree to testify, he will be compelled by the law to order her release.”

If the motion is successful, Manning will be freed for the very reason she has been caged: her silence. The judge can decide to recognize that Manning won’t speak as a consequence of more time in jail — or because she will continue to face unprecedented $1,000-per-day fines. Any other conclusion, after her months of steadfast and principled grand jury resistance, would fly in the face of all reason. The whistleblower’s actions and words make it plain.

“I have been separated from my loved ones, deprived of sunlight, and could not even attend my mother’s funeral,” Manning said in a statement Wednesday. “It is easier to endure these hardships now than to cooperate to win back some comfort, and live the rest of my life knowing that I acted out of self-interest and not principle.”

Federal grand juries have long been used to investigate and intimidate activist communities — from the late 19th century labor movements, to the Puerto Rican Independence Movement and black liberationists of the last century, to the more recent persecutions of environmentalists, anarchists, and Indigenous rights fighters. Manning has consistently shown her refusal to cooperate with any such process, and again asserted in her latest statement that grand juries are “used by federal prosecutors to harass and disrupt political opponents and activists through secrecy, coercion, and jailing without trial.”

The Grumbles motion filed on Wednesday contains a letter from the United Nations Special Rapporteur on Torture Nils Melzer, written late last year accusing the United States of submitting Manning to treatment that is tantamount to torture. As I wrote after the letter was first released, Melzer not only criticized the torturous practice of coercive imprisonment and harsh fines, but noted that Manning’s “categorical and persistent refusal to give testimony demonstrates the lack of their coercive effect.”

The motion also includes a personality assessment carried out by Dr. Sara Boyd, a clinical and forensic psychologist from the University of Virginia, which suggests that Manning is constitutionally incapable of acting against her conscience. “Manning exhibits long standing personality features that relate to her scrupulousness, her persistence and dedication, and her willingness to endure social disapproval as well as formal punishments,” Boyd wrote.

Manning’s consistent behavior in the face of immense hardship and financial ruin should be wholly sufficient evidence that she will not be coerced; the personality assessment and the letter from the U.N. rapporteur no more than state the obvious. Were the judge to decide to continue imprisoning Manning, which he has the discretion to do, he would do so in the face of overwhelming evidence.

Meltzer-Cohen, Manning’s attorney, has in the past successfully seen a grand jury resister released as a consequence of her filing a Grumbles motion. In 2014, her former client, a New York-based anarchist, was released after spending 241 days in a federal prison for refusing to testify. Meltzer-Cohen filed a motion arguing that since the young man had made amply evident that he would never cooperate, the coercive premise of his imprisonment was proven invalid.

That motion was aided by letters from friends and acquaintances, as well as a Change.org petition — arguably less august testimony than that which accompanies Manning’s motion. But the judge in that case ruled, begrudgingly, that the evidence compelled him to release the prisoner. “The refusal to testify is somehow transmogrified from a lock to a key,” the judge wrote in his decision. At the time, Meltzer-Cohen told me that the case illustrated the power of grand jury resistance; that people “have been capable of standing strong in the face of serious consequences” and that resisters “can survive and even prevail.”

It is a perverse juridical logic that finds potential justice in brutally coercing a witness to testify before a secretive hearing, ripe for governmental abuse. But even the nefarious law, if followed to the letter, demands that Manning be immediately freed.