Bloomberg has spent $50 million on the delegate-rich state, where his campaign has worked hard to control messaging in recent days. During a rally Sunday night at the historic Hangar 9 in San Antonio, Texas, former New York City Mayor Mike Bloomberg made the case to a crowd of close to 600 people that he’s the best candidate to beat President Donald Trump in November.

It was Bloomberg’s seventh trip to Texas since he entered the race in November, part of his campaign strategy to make gains in the delegate-rich state, where he’s spent upward of $50 million. The billionaire, who has spent more than $460 million of his own money on his campaign, spoke comfortably in the historic venue at the city’s former Brooks Air Force Base, referencing the city’s “Military City USA” moniker and its Latin roots. “I know I just missed the rodeo, and I’m too early for a fiesta,” he said between rounds of laughter and applause from the crowd after an introduction from Democratic state Rep. Leo Pacheco.

Despite his campaign’s immense focus on Texas, where Bloomberg has won endorsements from a number of influential Texas politicians and hired the state Democratic Party’s vice chair, he enters Super Tuesday polling third in the state, with between 16 and 20 percent support. Vermont Sen. Bernie Sanders is in the lead, followed by former Vice President Joe Biden — the establishment consolidation behind Biden threatens to compromise Bloomberg’s Super Tuesday hopes. His campaign has worked hard to control messaging in recent days, apparently realizing that an early assumption that spending a lot of money can be an effective substitute for a strong field operation was wrong — and that Bloomberg may after all fall short in the state where his campaign has focused most of its efforts.

Bloomberg will appear at a rally in West Palm Beach, Florida, on Tuesday night, instead of in a Super Tuesday state. In Texas, his campaign did not schedule any election night watch parties. The decision was made due to a fear of a humiliating Bloomberg loss and low attendance, according to a senior campaign staffer, who was not authorized to speak about their employer.

“A lot of high-profile supporters have switched to Biden after South Carolina too, so they’re even more concerned,” the staffer said. Early this week, Bloomberg’s Texas campaign tightened its messaging around voter engagement efforts, directing staff not to conduct media interviews and canceling scheduled media requests to accompany canvassers on the ground. After advising over the weekend that it would grant ample media access for interviews with staff and canvassers in Texas, staffers at Sunday’s rally were not permitted to be interviewed by members of the press without approval from leadership. Campaign spokesperson Lizzie Lewis sent an email to the Texas state team on Monday advising staff not to allow organizers or volunteers to conduct any media interviews, saying that they needed to focus on get-out-the-vote efforts and meeting as many voters as possible. “We will not be granting anymore interviews at staging locations or field offices,” read the email. “Volunteers and organizers need to focus on GOTV and voter engagement.” Indeed, after agreeing last week that The Intercept could interview staffers and shadow canvassers as they cut turf, the campaign cancelled the plan, saying that canvassers had been less productive in recent days when media had accompanied them to knock doors. (Victoria Yu, the campaign’s Texas deputy director for communications, also pointed to incidents of vandalism at Bloomberg offices around the country, including in Texas, as a reason they were limiting access to organizers and volunteers.)

One volunteer phone banker said her efforts were not yielding many results. “Out of like 30 … four people answered, one of them said no, and three of them said yes,” said the 58-year-old volunteer named Griselda. Still, she said she continued to believe that Bloomberg was the party’s best chance of beating President Donald Trump and that he would benefit from the shrinking field. “I think he’s probably the one that will go all the way,” she said of Bloomberg, in an interview outside the campaign’s San Antonio field office during a smoke break.

The Bloomberg campaign has made a handful of other blunders in Texas. According to the staffer and a local strategist who helped the state campaign find employees, campaign workers were sent organizer training materials from staff in New York, some of whom previously worked for Hillary Clinton. The slide deck was still printed with the logo from Clinton’s 2016 presidential campaign.

The campaign also made poor hiring decisions, said the staffer, who supports Biden but took a job with the Bloomberg campaign because it paid well. “The investment, it presents itself to be one thing, but the reality is another. He’s spending $11 million on a paid canvass in Texas alone, in addition to our field program, which is in essence a paid canvass because they have hired people who don’t know how to even spell organizing,” they said. “In our training, it was very evident. In one eight-hour training, I can’t turn someone with zero experience into the organizer we need at this stage. We should have been doing ongoing training the whole time. They’re onboarding staff at such a high rate that the quality control is not there.” Most of the 19 offices aren’t staffed or set up to be worked out of, they said. “It’s really a facade at this point.”

The winnowing of the Democratic field after Pete Buttigieg and Amy Klobuchar dropped out on Sunday is also a welcome development to Texas party officials, who said voters were worried that their primary votes wouldn’t matter given the size of the field.

“While we were hitting the streets and hitting everybody at the polls, people were concerned. They want to make sure that their vote on Tuesday was gonna count. And I think there was a lot of holdup, saying, Wait a minute, we need to wait and see who’s actually gonna be standing,” said Bexar County Democratic Party Chair Monica Alcantara at Bloomberg’s Sunday rally. (She noted that her presence at the rally was not an endorsement of Bloomberg.) Still, Bloomberg is unlikely to be the beneficiary of the smaller field, as Buttigieg and Klobuchar both endorsed Biden and appeared alongside him at a rally in Dallas on Monday night.

After the rally on Sunday night, Bloomberg headed to Manassas, Virginia, another Super Tuesday state. His departure from Texas came as a surprise to several of his supporters who came out to a Latino voter outreach event the campaign held at Lisa’s Mexican Restaurant off Bandera Road in a northwest San Antonio suburb on Monday evening. Upon learning that Bloomberg would not be at the event, one supporter who had been waiting for him with her young son, wearing a Bloomberg 2020 “¡Ganamos!” T-shirt and a matching button, left. 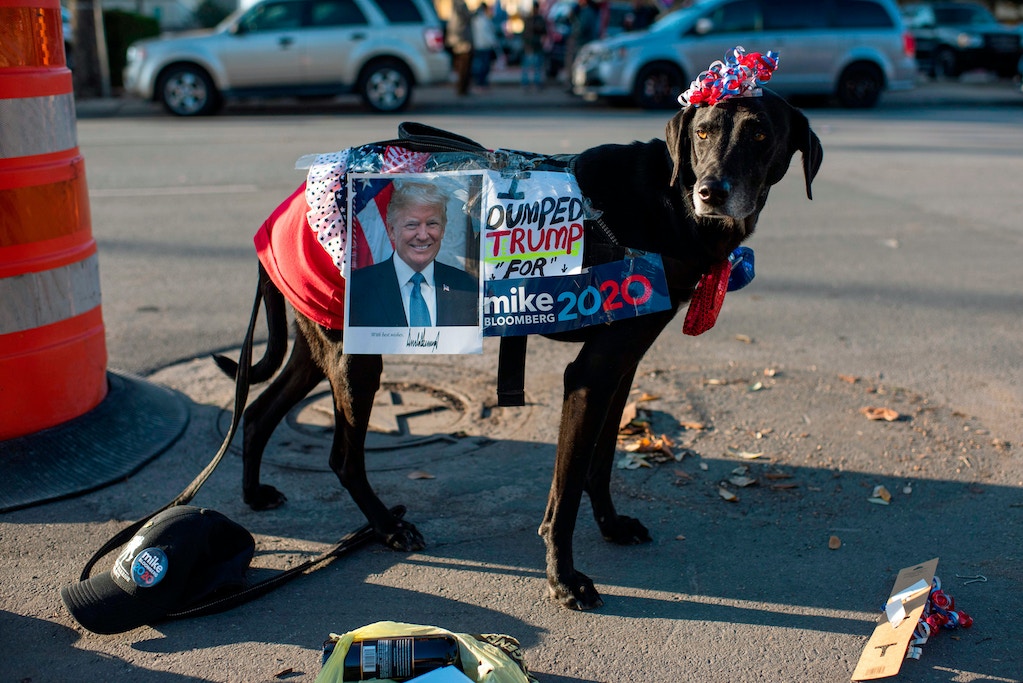 Yolanda Sutter dresses up her dog, Star, to show their support for Bloomberg at the Viva Villa restaurant in San Antonio, Texas, on Jan. 11, 2020.

Jack Calderon, a 56-year-old union pipe-fitter from Chicago who has split his time between there and San Antonio since 2017, said he attended Monday’s outreach event because he wanted someone in the White House other than Trump. “Just reaching out to different candidates and them reaching out to us, that’s what brought me here, I’ll see what it’s about.” He’s registered to vote in Chicago, and plans to vote for Bloomberg there. He said he thought Bloomberg was a strong-arm to go against Trump. “Not so much the money, the other ones just tuck tail and run,” he said. “I kind of like the way Mike goes tit for tat, you know. They go back and forth with words, and he’s not afraid to fight him on Twitter.”

But Calderon said he would vote for any nominee. “I don’t even care if it’s another Republican,” he said. His family and friends are supporting a variety of candidates.

Ramon Velasquez, a 72-year-old San Antonio resident who was invited to attend Monday night’s event, said he was supporting Bloomberg because he came to San Antonio, and would have considered other candidates if they had done the same. (Biden, Sanders, and Massachusetts Sen. Elizabeth Warren have all held rallies in San Antonio in recent months.)

“I believe in what Mr. Bloomberg has to offer to the Hispanic community,” Velasquez said. “He’s sensible; he’s not in there for the money, he’s in there for the people.” He said he voted for Sanders in the 2016 primary, and for Clinton in the general, and said he thought the Vermont senator would eventually win the Democratic nomination, in which case he would vote for him too.

“I think Bernie will take it,” he said.