Activists Who Disrupted Biden in Detroit Back Sanders, But Dread Trump Most of All

Climate activists from the Sunrise Movement helped disrupt a Biden rally this week, but they fear Donald Trump more than they loathe Joe Biden. 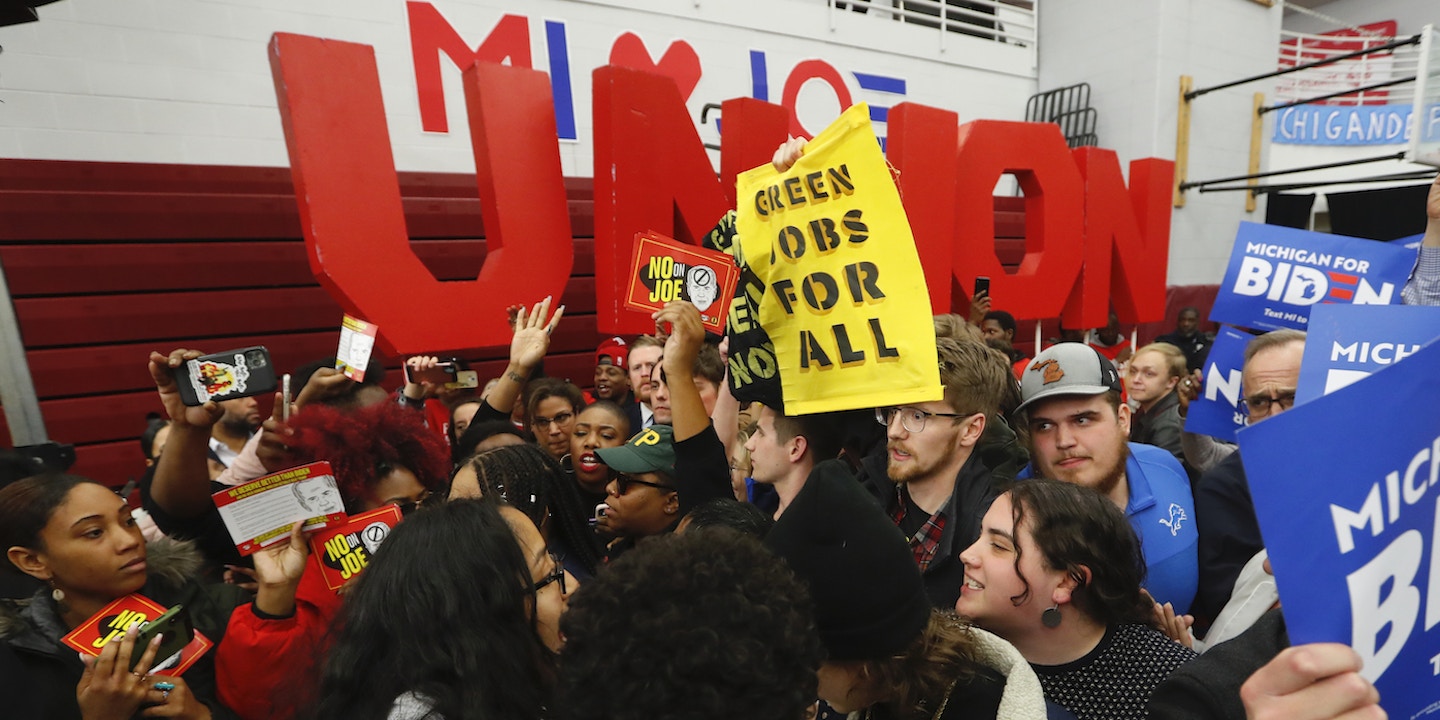 The young activists who disrupted Joe Biden’s rally in Detroit on Monday night — chanting “Hey, hey! Ho, ho! Joe Biden has got to go!” — struck terror in the hearts of some Democrats, who fear that supporters of Sen. Bernie Sanders might abandon the party, and electoral politics, if he fails to win its presidential nomination, as seemed likely after Tuesday’s contests.

Video from @danielmarans of @byp100 and @sunrisemvmt protesters chanting against Biden in Detroit on Monday pic.twitter.com/lZSBWoUcbm

The nightmare for Biden supporters, who are terrified of handing Donald Trump any advantage, would be to see their candidate regularly protested by young Sanders supporters, who even managed, in 2016, to shut down a Trump rally in Chicago.

But a spokesperson for one of the groups that took part in the anti-Biden protest, Sofie Karasek of the Sunrise Movement, told The Intercept that, despite “the deep anger and frustration young people feel at Vice President Biden’s campaign,” the climate activists are committed to defeating Donald Trump in November no matter who the Democrats nominate.

“The establishment Vice President Biden has been a part of his entire career has done almost nothing meaningful to combat the climate crisis, and brought our society to the brink of climate catastrophe, which is why so many young people prefer the candidacy of Senator Sanders and his vision for a transformative Green New Deal,” Karasek wrote in an email.

“That said, the thing we dread most is four more years of Donald Trump,” she added, so the activists “will do everything we can to prevent that.”

Last night we and @byp100 held Joe Biden accountable for his failure to embrace a bold climate agenda and for his history of supporting legislation that has hurt workers and vulnerable communities in the states of Michigan.

The Sunrise Movement endorsed Sanders in January after he won the votes of 76 percent of its members. Sen. Elizabeth Warren came second in the ballot with 17.4 percent of the vote. Biden won just 0.36 percent.

Biden’s climate plan — which would invest $1.7 trillion for the United States to become carbon neutral by 2050 — was good enough to earn a B+ from Greenpeace, but was scored an F by the Sunrise Movement.

The Sanders climate plan is far more ambitious, investing $16.3 trillion for a Green New Deal and aiming to reach net-zero emissions by 2030. That earned him an A+ from Greenpeace and the Sunrise Movement’s endorsement. “We know that no matter who the next President is, we will need to turn millions of people into the streets and disrupt business as usual in order to win a Green New Deal,” the group wrote in its endorsement. “But our movement has spoken clearly. We believe a Bernie Sanders Presidency would provide the best political terrain in which to engage in and ultimately win that struggle for the world we deserve.”

The disruption of Biden’s address to what was supposed to be a unity rally — where he was endorsed by two former rivals, Sen. Kamala Harris and Sen. Cory Booker — began when a Sanders supporter in the crowd heckled him for having referred to Jesse Jackson as a “boy” in 1984. Biden — who points out that he also referred to Gary Hart the same way at the time — asked the heckler if he was “with Trump.”

Today, organizers with Detroit DSA, @sunrisemvmt and @BYPDetroit held @JoeBiden to account in Detroit for his history of betraying workers and the planet.

As his supporters cheered to drown out the protesters, Biden appealed for calm. “It’s not a Trump rally,” he said. He then dismissed them with a term that rankles Sanders supporters. “The Bernie Bros are here,” Biden announced.

As the men with the banners were led away by the police, activists from the Sunrise Movement and other groups, including Black Youth Project 100, prevented Biden from resuming his prepared remarks by chanting and waving signs in favor of the Green New Deal and against him.

D’atra Jackson, the national director of the Black Youth Project 100, took part in the protest.

As they filed out of the rally, members of her group held up the movement’s “No on Joe” fliers, which they handed out in South Carolina last month, in an unsuccessful effort to drain the former vice president’s support among black voters.

Video from @detroitdsa of Biden rally in Detroit on Monday disrupted by Sanders supporters from @sunrisemvmt and @byp100 chanting: "Hey, hey! Ho, ho! Joe Biden has got to go!" pic.twitter.com/elBQ4iILHZ

Near the end of a video clip shared by the Detroit DSA, Symone Sanders, a Biden aide who was press secretary for the Bernie Sanders campaign in 2016, can be seen trying, and failing, to engage the black activists in dialogue.

“Honestly I can’t believe we actually held a 3min Action at a Presidential Candidate event,” Jackson tweeted later. “We chanted louder. Disrupted his whole shit. Made sure he lost momentum. And left, safely. It was 3 whole minutes! That’s just unheard of.”

On the eve of the Michigan primary, which Biden won handily on Tuesday, Sunrise Movement members took part in a viral TikTok meme, pleading “Democrats! Please don’t make me vote for Joe Biden!”