Moderators and others employed through vendors are complaining about health conditions at Facebook offices in Austin, Texas, and Mountain View, California. 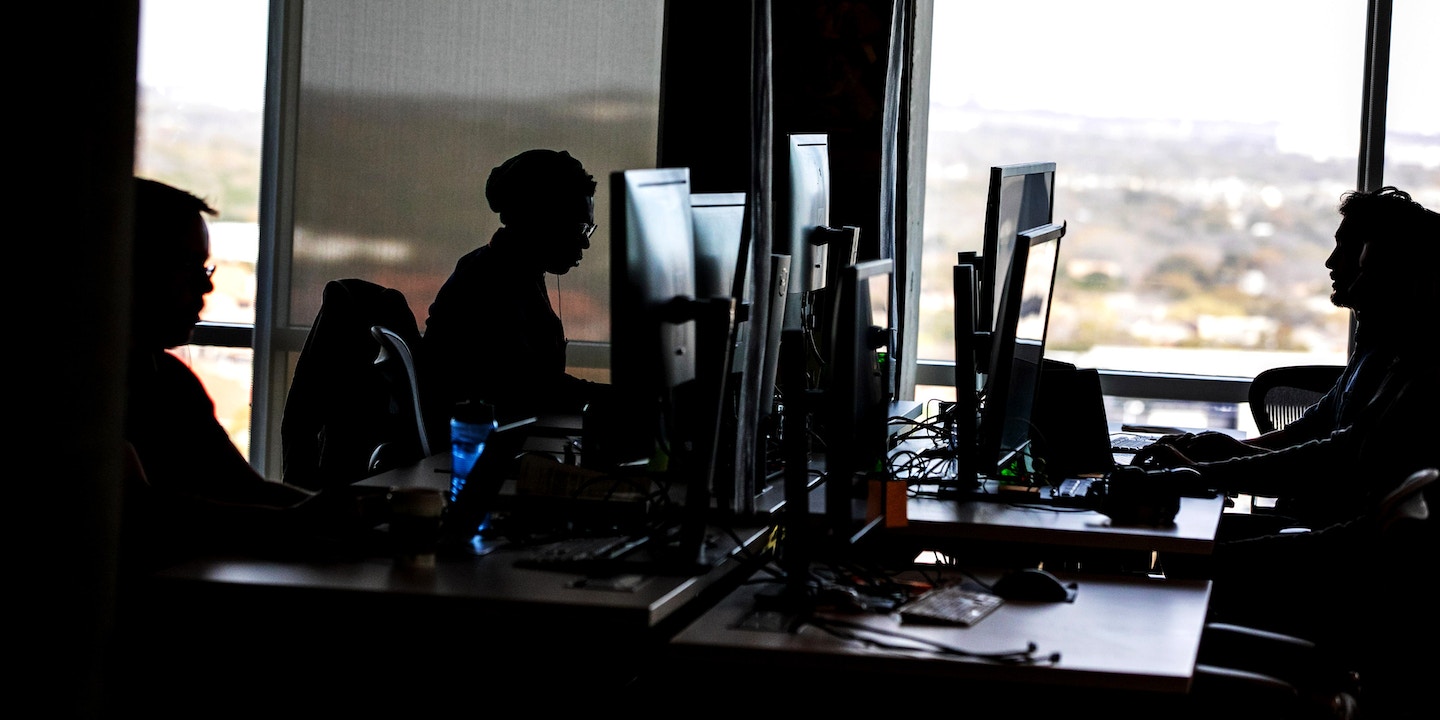 Like other tech firms scrambling in the face of the Covid-19 pandemic, Facebook is encouraging staff worldwide to work from home, part of a so-called social distancing strategy to slow the new coronavirus’s spread. But some in the social network’s army of contract workers, already often treated like second-class employees, have complained that they have no such luxury and are being asked to choose between their jobs and their health.

Discussions from Facebook’s internal employee forum reviewed by The Intercept reveal a state of confusion, fear, and resentment, with many precariously employed hourly contract workers stating that, contrary to statements to them from Facebook, they are barred by their actual employers from working from home, despite the technical feasibility and clear public health benefits of doing so.

The discussions focus on Facebook contractors employed by Accenture and WiPro at facilities in Austin, Texas, and Mountain View, California, including at least two Facebook offices. (In Mountain View, a local state of emergency has already been declared over the coronavirus.) The Intercept has seen posts from at least six contractors complaining about not being able to work from home and communicated with two more contractors directly about the matter. One Accenture employee told The Intercept that their entire team of over 20 contractors had been told that they were not permitted to work from home to avoid infection.

A Facebook spokesperson told The Intercept that “for both our full-time employees and contingent workforce there is some work that cannot be done from home…for content reviewers, some of this work must be done from the office for safety, privacy and legal reasons,” adding that “we’re exploring work from home options on a temporary basis, and have already enabled it in some locations.” The spokesperson added that Facebook is “taking additional steps to limit contact for those in the office, like physically spreading people out, limiting in-person meetings, eliminating social visitors, making changes to food service, increasing office cleaning and encouraging people who don’t need to be in the office to stay home.”

In some cases, workers said they’ve been told that the only way they can stay home is by using the finite paid time off days they’re allotted each year.

“Most people here are sick, coughing, and sneezing. The office ran out of Clorox wipes.”

“Despite guidance from Facebook,” reads one contractor post, “contractors are being asked to come into the Mountain View office to work, unless they have been diagnosed with SARS-CoV-2.” This employee added that “We are being told that if we choose not to come in, whether it be for health concerns or out of an abundance of caution, that we will have to use PTO, and it’s unclear if our absence is going to be counted against us.”

Some of the contract workers in question are moderators, tasked with reviewing the most graphic and traumatizing content across Facebook’s apps. Large tech companies have for decades relied on two distinct tiers of workers: full-time employees lavished with generous pay and perks, and contractors with far fewer benefits who, like many American workers, can count on little job security even as they are pinched by rising housing and health care costs. Decisions about who is allowed to work from home underscores this divide: While Facebook has said it will “allow anyone whose job allows them to do so to voluntarily work remotely” through at least April 10, posters in the employee forum said that Facebook contracting vendors are enforcing very different policies.

According to a post from an Austin Facebook contractor, Accenture “is only sending home people who ‘exhibit flu like symptoms in the work place.'” This contractor added that they “just saw 3 people get sent home and we’re all still in the office trying to focus on our work like cross contamination doesn’t exist for 14 days prior to symptoms showing up…At this point, I’m at a loss.”

These contractors said the information they’ve received from both Facebook and Accenture is confusing and contradictory. A post from a Facebook employee who manages Accenture staff said that “During this time period caused by Covid-19, if any contingent worker falls ill and needs to take time to recover, they do not need to use their sick or PTO time.” But Accenture employees said in the forum that this is not the case: “This is not what I’ve been told,” replied one contractor. “I’ve been informed by [Accenture] … that contingent workers can choose either unpaid sick leave or use PTO. They are not, however, allowed to have paid sick leave.”

Posts from an Accenture manager seem to confirm this policy contradiction: “The current state for PTO has not changed from what’s has [sic] previously put out by your team leads,” reads one internal post. After another contractor asked this manager why working from home wasn’t an option, they explained that “Currently [Facebook] does not allow us to work from home. This is due to the content we review. That is the current state. Will it change? I’m not sure but will continue to keep you informed.”

“I have a chronic respiratory disease,” wrote another Accenture contractor, “and while my team lead has been supportive, [there] hasn’t been guidance on what I’m supposed to do now that I’ve run out of PTO. … I am going in tomorrow because I’m not sure what to do at this point.” A co-worker added that Accenture’s human resources staff had asked anyone requesting sick leave to provide a note from any immunocompromised family members “to show that we have a legitimate concern. … This all seems quite unreal.”

“Most people here are sick, coughing, and sneezing,” wrote a Facebook contractor in Mountain View. “The office ran out of Clorox wipes and hand sanitizers, there are no masks or thermometer.” At this office, the disparity between Facebook’s full-time employees and their hourly support staff is particularly galling: “Some employees who work in the same building got paid 2 weeks of staying home! So how is that fair? Why their lives matter more than others? Why some of us have to choose between risking their work or their health?”

Neither Accenture nor WiPro could immediately comment. After The Intercept contacted Facebook, sources said the company deleted at least once lengthy thread on the PTO grievances, with one Facebook employee saying in the online workplace forum that the deleted post “contained false and misleading information about COVID-19 that was causing unnecessary panic for some people working in the [Mountain View] office.” This employee added that “going forward,” the company “will remove any posts or comment about COVID-19 flagged to us that contains misinformation.”

Update: March 12, 2020, 7:54 pm ET
This article was updated to include a statement from a Facebook spokesperson.