Trump Mistakenly Announces Ban on All Travel and Imports From Europe, Then Backtracks

The president sowed confusion by saying he had banned all travel from Europe to fight the new coronavirus, before aides corrected him. 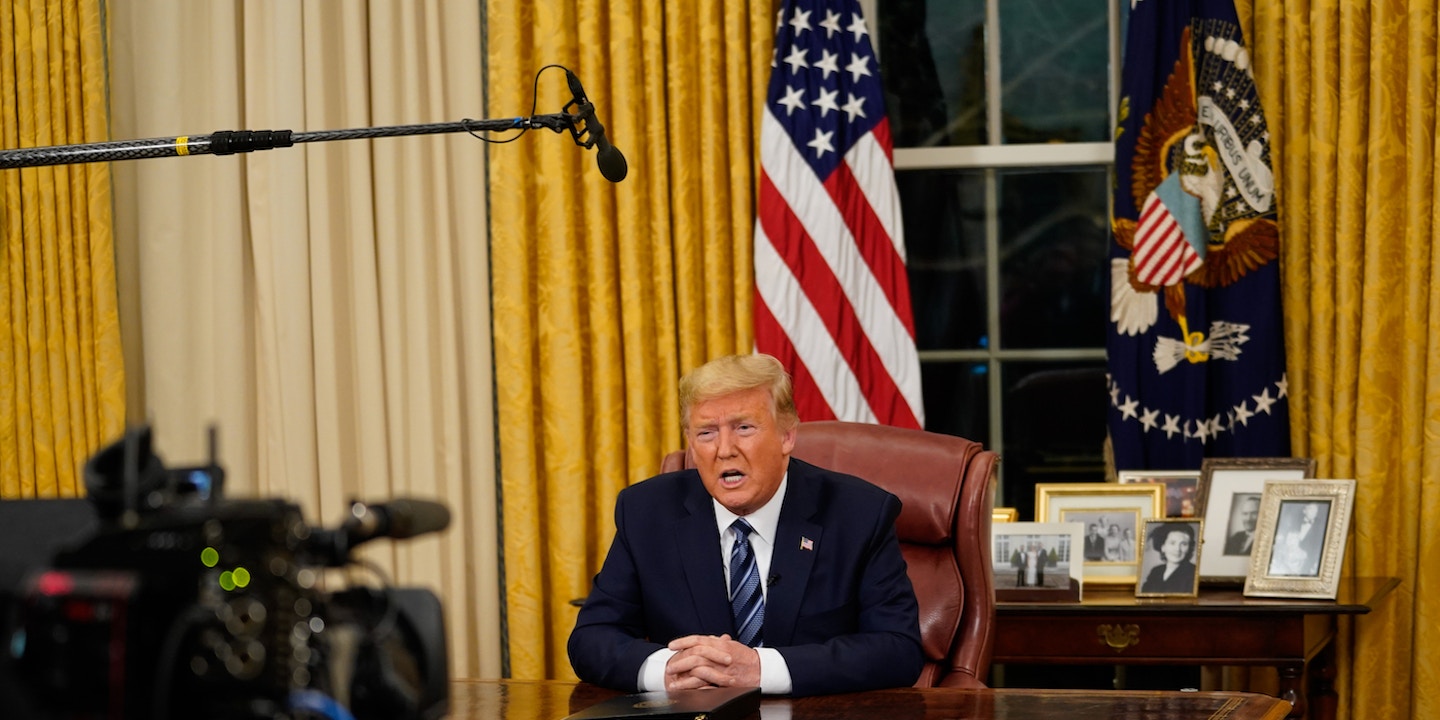 Lashing out at Europe for the spread of the “foreign” coronavirus to the United States, President Donald Trump told the American people on Wednesday he would halt all travel and imports from the continent. Within minutes, White House officials scrambled to correct him, explaining that the 30-day ban would only apply to some foreigners traveling from some European countries and not at all to goods.

The confusion had started during the address, when Trump said that the ban on “all travel from Europe” was necessary “to keep new cases from entering our shores,” but would not include the United Kingdom, where coronavirus has spread widely enough to have infected at least 459 people, including the country’s health minister.

We will be suspending all travel from Europe, except the United Kingdom, for the next 30 days. The policy goes into effect Friday at midnight. pic.twitter.com/Yeq1gVCIln

The backtracking began almost as soon as the president had finished speaking. As aides told reporters there was no ban on goods or cargo, the acting Homeland Security secretary tweeted that the travel ban was not Europe-wide. It would only apply to foreign citizens coming from one of the 26 European nations that make up the Schengen Area, a region in which travelers can cross borders without passports. While most European Union nations are in Schengen, five are not: Ireland, Croatia, Bulgaria, Romania and Cyprus. The ban will also not apply to European countries that are not in the E.U., including Russia and Ukraine.

Since the U.K. never joined the Schengen area, but still permits visa-free travel from all of those nations, enforcing the new ban will not be easy.

Hours after Trump announced the ban, and the exception, Prime Minister Boris Johnson warned the British public that the number of cases of the illness caused by the coronavirus — COVID-19 — would probably “rise sharply — indeed, the true number of cases is higher, perhaps much higher, than the number of cases we have so far confirmed with tests.”

"This is the worst public health crisis for a generation"

UK PM Boris Johnson says it is "not right" to compare coronavirus to flu, adding "many more families are going to lose loved ones before their time" as the virus spreadshttps://t.co/0jp2YH9bl2 #CoronavirusPandemic pic.twitter.com/WriDAlPjIT

“Some people compare it to the seasonal flu,” Johnson added, with a clarity lacking from Trump’s own statements, “alas that is not right. Owing to the lack of immunity, this disease is more dangerous.”

While excluding the U.K. from the ban appears to make no epidemiological sense — and the whole policy of travel restriction seems misguided, now that the virus is already spreading inside the United States — Trump might see the measure as a way to punish the European Union, the multinational bloc he encouraged the U.K. to withdraw from this year.

Trump detests the E.U. as an economic competitor and seems personally affronted by the way its leaders foster a pan-European identity as a counterweight to the ethnic nationalism he prefers.

“The European Union is a group of countries that got together to screw the United States — it’s as simple as that,” Trump said at a private dinner recorded by Rudy Giuliani’s Ukraine fixer in 2018. “They’re worse than China in the sense of barriers; we lose 151 billion with them,” he added. “The European Union is really bad,” the president told the all-white group of donors. “You know it doesn’t sound like it, you know, the European Union, we’re all sort of from there, right?”

In his speech, Trump boasted that his decision to restrict travel from China had slowed the spread of the coronavirus to the U.S. and claimed that European nations had higher levels of infection now because “The European Union failed to take the same precautions.” In fact, the virus might have reached Europe first simply because it is on the same landmass as China, and the extent of infection in the U.S. remains unknown, since a far smaller number of people have been tested for the disease.

Without citing evidence, Trump also claimed that a ban was justified because “a large number of new clusters in the United States were seeded by travelers from Europe.”

A proclamation posted on the White House website Wednesday night also listed a wide range of exceptions for Europeans who might be exempt from the ban, and made clear that it does not apply to American citizens or permanent residents.

Trump’s address focused so much on the new travel restrictions that he mentioned only in passing the measures that have helped to slow the spread of the virus in places like South Korea and Hong Kong — widespread testing and avoiding crowded spaces — which Americans might need to adopt sooner than later.

Trump also claimed that health insurance executives he met with “have agreed to waive all copayments for coronavirus treatments.”

“For testing. Not for treatment,” a spokesperson for the powerful health insurance lobby, America’s Health Insurance Plans, told Sarah Owermohle of Politico.

When he mistakenly announced the import ban, it seems possible that Trump simply misread the teleprompter, as is his wont — perhaps by inserting the word “only” into the meandering phrase: “these prohibitions will not only apply to the tremendous amount of trade and cargo, but various other things as we get approval.”

“Anything coming from Europe to the United States is what we are discussing,” the president added, in a statement that sounded both definitive and like the sort of conversational aside he often slips into speeches after stumbling over prepared remarks.

Near the start of the address, Trump also clearly misread another portion of the written text, and used his signature move of pretending that he meant to say the incorrect word in addition the correct one. “I am confident,” Trump said, “that by counting — and continuing — to take these tough measures, we will significantly reduce the threat to our citizens.”

As Chris Hayes pointed out in 2018, Trump does this all the time to avoid admitting he misspoke — but usually the confusion he generates in doing so is not enough to generate global panic.

An hour after Trump concluded his address from the Oval Office, he tried to clean up his mistake without admitting it, by tweeting: “please remember, very important for all countries & businesses to know that trade will in no way be affected by the 30-day restriction on travel from Europe. The restriction stops people not goods.”

Updated: Thursday, March 12, 4:58 pm EDT
This article was revised to add comments from British Prime Minister Boris Johnson and note that before President Donald Trump mistakenly declared a ban on imports from Europe on Wednesday night, he made another obvious error in reading his prepared statement but tried to cover it up by pretending that he meant to say both the wrong word and the right one.