How Jair Bolsonaro’s Son, Eduardo, Confirmed His Father’s Positive Coronavirus Test to Fox News, Then Lied About It

Sources with the cable network, furious by the Bolsonaros’ lying, tells the story of what happened. On Friday morning, at roughly 9:30 a.m. EST, a columnist with the large Rio de Janeiro newspaper O Dia published an article reporting that sources inside Brazil’s presidential palace had confirmed that the first coronavirus test administered to Brazilian President Jair Bolsonaro had been returned and indicated the president tested positive for the virus.

In Fox News studios in both New York and Washington, producers, reporters and on-air talent paid rapt attention to this story, in large part because Bolsonaro and his entourage — including a close aide who had already manifested symptoms and tested positive — had met days earlier at Mar-a-Lago with President Donald Trump, key Trump aides (including Vice President Mike Pence and Ivanka Trump), and Fox News’ prime-time anchor Tucker Carlson.

But Fox was unwilling to report something as significant as a positive coronavirus test for the Brazilian president without further confirmation. As a result, according to employees inside Fox News with first-hand knowledge of the episode but who are unauthorized to speak publicly about the matter, they decided they needed first-hand confirmation from either Bolsonaro or one of his three politician-sons. To obtain it, they quickly reached out to Alex Phares, the son of Trump confidant and Fox News analyst Walid Phares.

The younger Phares has become well-known in conservative circles for arranging media and other appearances for Bolsonaro’s youngest political son, the São Paulo Congressman Eduardo Bolsonaro, including booking him on three separate panels at the Conservative Political Action Conference (CPAC), held the week prior to the Trump/Bolsonaro Mar-a-Lago meeting. CPAC itself was the site for several now-confirmed coronavirus cases, including the leader of Spain’s far-right Vox Party Santiago Abascal, whom Eduardo boasted of meeting there (meeting and shaking hands with Abascal is what led Texas Senator Ted Cruz to self-isolate for the second time):

At roughly 10:00 a.m. EST on Friday morning — roughly 40 minutes after the O Dia column appeared — Phares, first by text and then by voice, confirmed to Fox News that Eduardo, that morning, had told him that his father’s first test had indeed returned positive. But Fox was still unwilling to report this without speaking to one of the Bolsonaros directly. They asked Phraes if he could arrange both a telephone and on-air interview with Eduardo.

Roughly thirty minutes later, Fox spoke directly to Eduardo, who, Fox sources insist, stated unequivocally that his father had received the results of his first coronavirus test and it was positive; the president’s son said that they were awaiting the results of a second test. Eduardo and Fox agreed that he would be interviewed about the coronavirus test on-air via Skype at 11:30 a.m. EST.

Shortly before the interview, Eduardo again confirmed that his father’s first test was positive for the presence of coronavirus. Hearing two separate, definitive confirmations from Eduardo, as well as from Phares, Fox had the confidence it needed to have its White House correspondent, John Roberts, announce on Twitter that President Bolsonaro had tested positive for the coronavirus, and Fox shortly thereafter published a print article online and a broadcast report with the same news. All of that reporting made clear that their source was Eduardo. 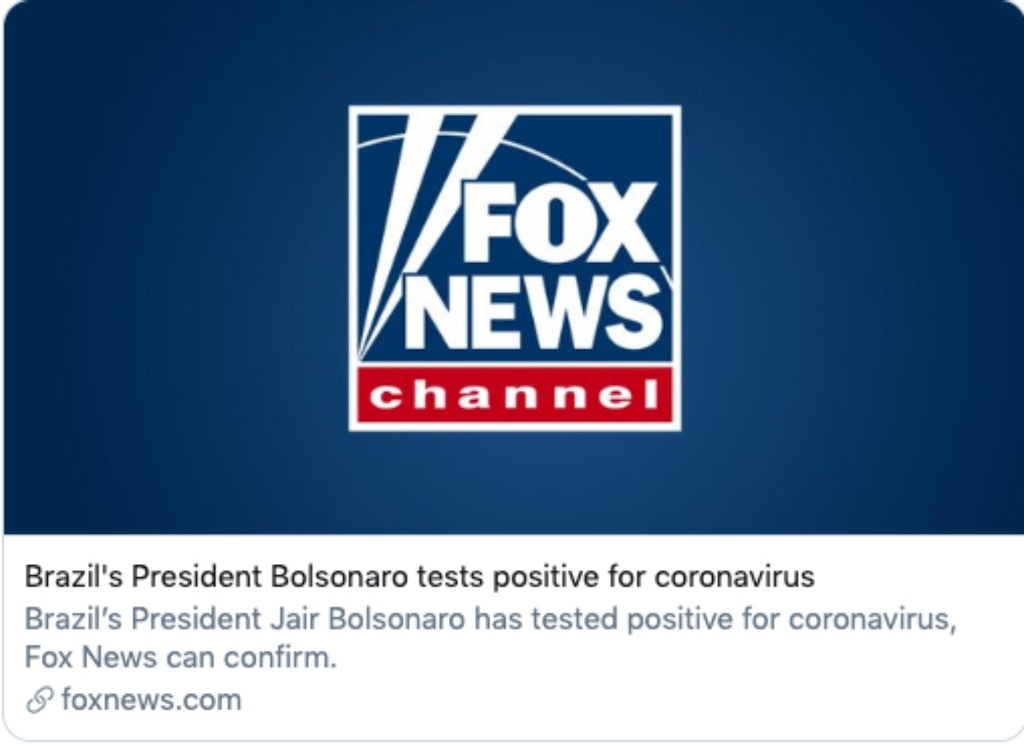 The Brazilian media had exercised the same caution as Fox, unwilling to report something so momentous based solely on an anonymously-sourced report in O Dia. But once Fox News had reported the news based on Eduardo’s confirmation, they naturally began noting Fox’s report. News of the president’s positive coronavirus test spread quickly online.

As soon as that happened, Eduardo went on the offensive with a standard Bolsonaro family tactic: accusing the Brazilian media of maliciously fabricating “Fake News” against his father, a particularly inflammatory accusation where it involved reports of his father’s positive coronavirus test. But when Brazilian media outlets united to make clear that the report was not theirs but Fox News’ — a network beloved by the Bolsonaros and their movement — and that the named source for the story was Eduardo himself, Eduardo had two choices: he could either admit that Fox was telling the truth and that he had confirmed the positive test to them, or he could start accusing Fox News of lying. He chose the latter.

In a series of increasingly unhinged tweets that extended into Saturday morning, Eduardo insisted that he had never told any reporter — including one at Fox — that his father had tested positive for the coronavirus. Sitting in front of photos of a machine gun and a Revolutionary American flag, Eduardo then recorded videos in both Portuguese and English (see below) in which he insisted (caps in original) “THIS IS ALL A LIE”: 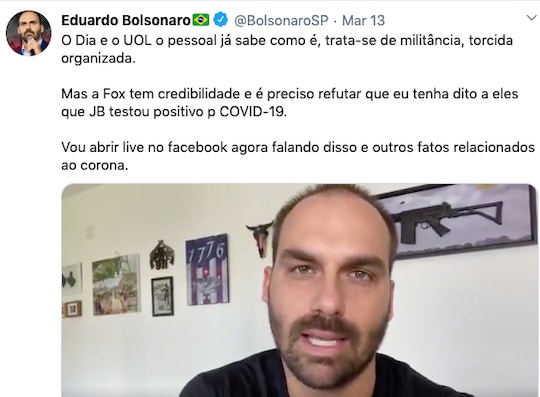 Hoax of the day: media lies that @jairbolsonaro has Corona Virus and that I confirmed it to Fox News.

THIS IS ALL A LIE, DETAILS IN THE VIDEO BELOW.

(unlike most of the media, Fox News has credibility and my respect, but today they were wrong, I didn't tell any information) pic.twitter.com/W0Ti16D85K

Then, in a bizarre on-air mid-Friday interview on Fox News — by which point President Bolsonaro himself had claimed that his test result, which he has still yet to show the public, was negative — Eduardo told the visibly baffled and frustrated Fox anchor Sandra Smith that he was not aware of the results of any first coronavirus test for his father, and continually tried to shift the interview back to his father’s claim that the ultimate test was negative.

In response to Eduardo’s false accusations that Fox had fabricated their conversations with him, Fox News issued an avalanche of clear and emphatic denunciations. Fox sources told the Intercept that they were shocked and indignant — and still are — as they watched Eduardo repeatedly lie and brazenly deny that he told the network that his father’s test was positive, even though he had done exactly that twice. And they hardly disguised their anger.

Their public responses included an article — headlined: “Brazil President Bolsonaro’s son claims father tested negative for coronavirus despite earlier reports” — that made clear at the beginning that Eduardo was lying:

Reports out of Brazil had initially indicated Bolsonaro had tested positive, and his son appeared to confirm this to Fox News earlier Friday, adding that further testing was being done to confirm the diagnosis and the second set of testing was expected later in the day.

However, in a subsequent appearance on “America’s Newsroom,” Eduardo denied his father had ever tested positive.

Fox then released the text messages between its journalists and Phares to Globo’s flagship news program, Jornal Nacional, in which Phares confirmed to Fox that he had just spoken to Eduardo about the president’s positive test.

Meanwhile, on Twitter, Fox’s John Roberts explicitly stated — as Eduardo was denying it — that the president’s son “had told Fox that his father had a preliminary POSITIVE test for coronavirus.”

After telling @FoxNews that his father had a preliminary POSITIVE test for coronavirus, Eduardo Bolsonaro now tells @FoxNews the test was NEGATIVE. Bolsonaro says has been in touch with the White House.

Roberts then went on the air on Fox and, standing in front of the White House, emphasized that Eduardo was lying in his denials:

Another Fox reporter, Chris Irvine, similarly made clear that Eduardo was lying, tweeting on Friday: “Earlier today, Eduardo Bolsonaro confirmed reports that his father had tested positive for coronavirus to FOX News and said they were waiting for further testing. He later appeared on FOX News and claimed his father had tested negative for coronavirus.”

From the start, the Bolsonaros’ behavior has been extremely strange regarding the question of whether the Brazilian President does or not have the coronavirus. Indeed, when a widely respected reporter from Brazil’s largest newspaper, Monica Bergamo of Folha, reported that Bolsonaro’s Communications chief Fabio Wajngarten had returned from the U.S. with classic COVID-19 symptoms and was being tested, Wajngarten attacked her on Twitter and implied she had made it up — only for his positive test to be confirmed the next day.

Now that nine members of Bolsonaro’s entourage have tested positive, the mystery has less clarity than ever. Almost immediately after claiming that his test was negative — just hours after his son told Fox that it was positive — Bolsonaro refused to release the results of the test itself or have any doctor vouch for them, and then, without explanation, the president’s office announced that Bolsonaro would remain in isolation for fourteen more days and would undergo another test.

But then yesterday, during nationwide anti-democracy protests originally encouraged by Bolsonaro aimed at the Congress and Supreme Court, but which Bolsonaro ultimately discouraged on the grounds that it would be dangerous in a pandemic, the Brazilian President shocked everyone by leaving the palace — and the medical isolation he was supposed to be in — to join a crowd of supporters. He proceeded to touch at least 272 of them, including shaking hands, fist bumping and taking their telephones to snap selfies before handing them back. Prior to that on Twitter, Bolsonaro had implicitly encouraged his supporters to attend the mass street gatherings — in direct contradiction of the urgings of his own Health Minister — by posting photos of the protests in various cities.

That President Bolsonaro — who has mocked the pandemic from the start as a “fantasy” and a media exaggeration and whose key evangelical allies are now calling it a hoax — would leave his medical isolation and risk the health of his own supporters by physically interacting with them outraged much of the country, particularly as it appeared to send exactly the opposite message about social distancing that healths officials in Brazil, where huge numbers of poor people live in extreme density in favelas and where the health system is already utterly dysfunctional, are desperate to convey.

But the question of Bolsonaro’s health remains shrouded in mystery. And that mystery is now fueled by his son inadvertently starting a war with a news outlet they trained their followers to worship: Fox News. Eduardo Bolsonaro essentially forced Fox News to prove that the Bolsonaros are liars by accusing the network of fabricating conversations they had with him in which he clearly confirmed his father’s positive test.

The number of people in Bolsonaro’s entourage with him in the U.S. and now confirmed as positive for the coronavirus is 14.