As the U.S. Blames China for the Coronavirus Pandemic, the Rest of the World Asks China for Help

China’s private and public sectors are filling gaps in medical equipment where other states are failing. 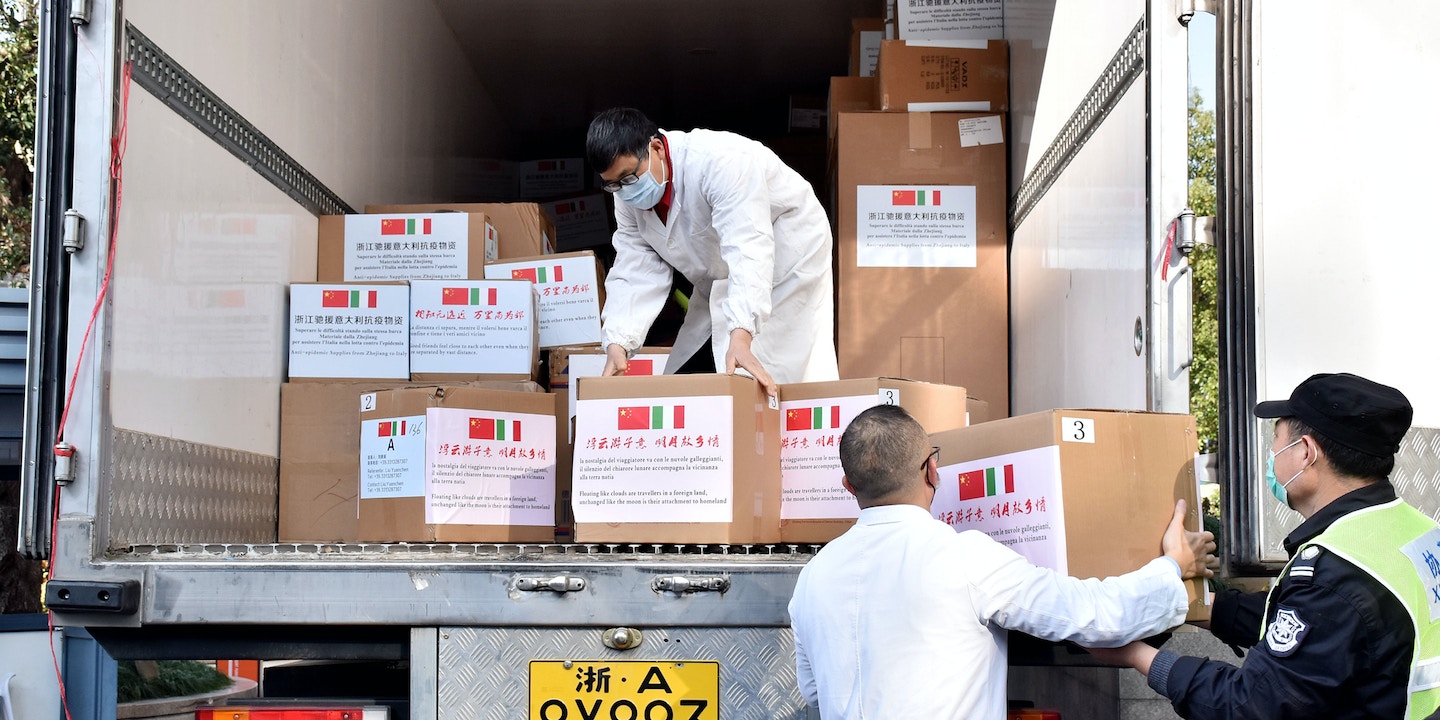 As the number of coronavirus infections spirals out of control, the U.S. and countries around the world have reported major shortages of ventilators, respirators, test kits, surgical masks, and other essential health equipment for dealing with the pandemic. On Wednesday, President Donald Trump continued to blame China and doubled down on his use of the racist term “Chinese virus.”

Yet now that the situation in China appears to have stabilized, the country is positioning itself at the head of the global response to Covid-19, adopting a unique leadership position that may alter global power relations, despite the biggest shock to its industrial output and economy in recent history and its coverup in Wuhan at the beginning of the crisis.

“The only country that can help us is China. For the rest of them, thanks for nothing.”

Western Europe and the U.S. are struggling under the weight of the crisis, with cases rising exponentially every day and higher death rates in Italy than anywhere else. China’s private and public sectors are filling in gaps in equipment where other states are failing, although the spread of the disease is such that demand for those materials might quickly outpace China’s supply. The government and Jack Ma, a Chinese billionaire and co-founder of the Alibaba Group, have already sent doctors and medical supplies to France, Spain, Italy, Belgium, Iran, Iraq, the Philippines, and the United States. Chinese citizens living abroad are flying home in large numbers to avoid catastrophic health failures elsewhere. In Massachusetts, a Chinese woman tried and failed to be tested three times for Covid-19 before flying back home to be tested and treated.

“The Chinese government has been trying to project Chinese state power beyond its borders and establish China as a global leader, not dissimilar to what the U.S. government has been doing for the better part of a century, and the distribution of medical aid is part of this mission,” said Dr. Yangyang Cheng, a postdoctoral research associate at Cornell University who writes the science and China column for SupChina.

The most effective responses to the pandemic thus far have involved very high levels of Covid-19 testing. South Korea’s case is the most notable. The country has conducted roughly 300,000 tests and is able to do 15,000 a day, while flattening its curve and managing to avoid the draconian lockdowns implemented by China that are now taking hold in Western Europe and some American cities. The World Health Organization’s director-general, Tedros Adhanom, underlined South Korea’s strategy on Monday. “Our key message is: test, test, test,” he said.

The U.S. has failed to catch on to that message, as only about 60,000 tests have been conducted overall despite a population more than six times that of South Korea’s, according to government officials at a presidential press briefing on Tuesday. Trump called the WHO’s test “a very bad test” at the same briefing. In the meantime, intensive care units at many American hospitals could be overrun with sick patients in a matter of days. Memorial Sloan Kettering hospital in New York City, one of the nation’s top cancer facilities, has only a week’s supply of masks and limited supplies of ventilators and personal protective equipment, according to BuzzFeed News.

Even though American laboratories are beginning to produce larger quantities of Covid-19 tests, they are behind China’s capacity to do so and are unlikely to be able to provide much medical aid to other countries in the short term. In contrast, the Jack Ma Foundation has sent 500,000 testing kits and 1 million masks to the U.S., which will be distributed by the Centers for Disease Control and Prevention. Urgent medical supplies had been blocked by Trump’s trade war with China, and an exemption wasn’t granted until March 6.

China is now in a growing dispute with the U.S. after Chinese and American officials traded accusations over who was responsible for the virus, with Asian-Americans in the U.S. facing greater racism and prejudice as a result. China expelled American journalists on Tuesday following new restrictions on Chinese journalists in the U.S. and a tweet from Trump calling Covid-19 “the Chinese virus.” At a press briefing on Wednesday, Trump said “we’ll see what happens” when asked if he was considering “punishing China.”

U.S. Health Secretary Alex Azar told reporters on Sunday that he would not divulge the number of ventilators in the country for security reasons, but it is clear that the U.S. has a shortage of equipment that the federal government cannot hide. “Respirators, ventilators, all of the equipment — try getting it yourselves,” Trump reportedly told American governors on a conference call Monday, before igniting a Twitter spat with Andrew Cuomo, the governor of New York. Even though the U.S. needs ventilators, Italy and Germany were the ones scrambling to purchase them from major producers Dräegerwerk and Hamilton Medical, while other firms indicated that they haven’t received an influx of new orders.

Elsewhere in the world, China’s ability to provide much-needed medical aid stood in contrast to the lack of help from Western nations struggling with the virus themselves. “European solidarity does not exist. It was a fairy tale on paper,” Serbian President Aleksandar Vucic told reporters at a press conference on Sunday. Vucic announced that he had sent a letter to his “brother and friend” Xi Jinping, the Chinese president, asking for medical aid, stating that “the only country that can help us is China. For the rest of them, thanks for nothing.” The first test kits from China landed in Belgrade late Monday night.

The Jack Ma Foundation also announced that it would send “20,000 testing kits, 100,000 masks and 1,000 protective suits and face shields” to every country in Africa, and added that Ethiopia’s Prime Minister Abiy Ahmed would “take the lead in managing the logistics and distribution of these supplies to other African countries.” A senior Ethiopian health official told The Intercept that he hoped the tests provided by Ma would be sufficient and that “as the technology gets better,” Ethiopia also hoped to source them from multiple other countries as well. Ethiopia has a shortage of ventilators, however, and so far, “no one is providing” them, he said.

It’s unclear just how big an impact China will have on containing the global spread of the virus. While governments and private companies around the world have ramped up their testing manufacturing, the lack of ventilators will be a more difficult challenge to solve. The U.K., for example, called on all industries to support the production of 20,000 ventilators to supplement the 5,000 that its National Health Service currently has, but critics said the government should focus on boosting production from health companies that already make ventilators.

Howard French, journalist and author of “Everything Under the Heavens: How the Past Helps Shape China’s Push for Global Power,” cast doubt on China’s ability to save the day. “If this becomes generalized, I have a very hard time imagining China has on hand, or even has the ability to crank up, production of quantities of ventilators sufficient to address the urgent care needs of large numbers of people like this in many, many countries all at once,” he said.

Although “medical aid during a pandemic is an objectively good thing,” Cheng said, “China has, in more recently weeks, been rewriting the narrative of the outbreak from a scandal, one of Chinese government coverup and mismanagement, to a story of triumph, of Chinese strength and generosity, or even superiority of its governing system. The dysfunction in the White House, and perhaps to an extent 10 Downing Street, has certainly helped the Chinese government establish that narrative.”

“We have seen how the Chinese government uses foreign aid and investment to whitewash its human rights abuses, and how countries at the receiving end become less willing to criticize or hold China accountable,” she added. “That perspective should not be lost even in the crisis of a global pandemic.”