Donald Trump lacks the mental capacity to manage the Covid-19 crisis. Pence should use the 25th Amendment to remove him from power. 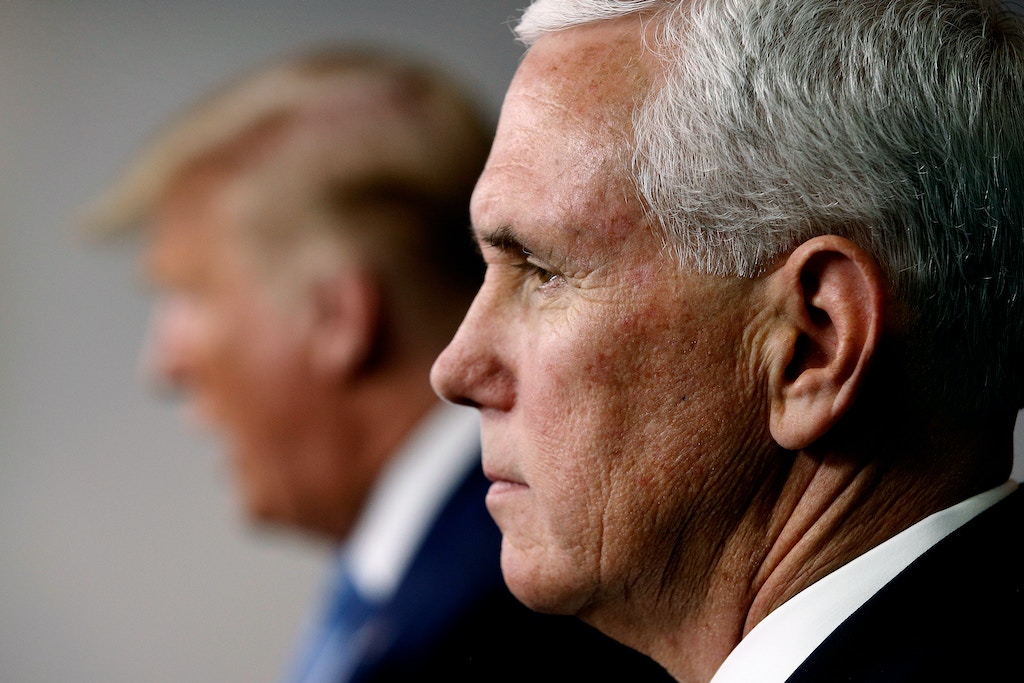 It’s time. We can’t wait any longer. You need to invoke Section 4 of the 25th Amendment of the U.S. Constitution.

The truth of the matter is that President Donald Trump does not have the mental capability to “discharge the powers and duties of his office.” Amid an unprecedented political, economic, and public health crisis, the commander-in-chief is unwell — and unfit.

You know this. On Friday, you were standing next to the president in the White House briefing room when NBC correspondent Peter Alexander asked him what he had to say to Americans who “are scared right now” because of the coronavirus pandemic. Trump responded with inexplicable rage, denouncing Alexander as a “terrible reporter” for asking a “nasty” question, and then mocking the owners of NBC — telecom giant Comcast — as “Con-cast.”

It was an insane response to the simplest of simple questions, but don’t take my word for it. “These are psychiatric symptoms, not simply boorish behaviors,” tweeted John Talmadge, clinical professor of psychiatry at the University of Texas Southwestern Medical Center. “Trump is mentally ill, cognitively compromised, brain impaired. He can’t even recognize a softball tossed his way.”

But you can, Mr. Vice President. You later went up to the podium and answered Alexander’s question: “I would say, ‘Do not be afraid to be vigilant.’” You seem to be able to do the job of president that Trump is manifestly unable to do. You have won praise for your handling of the crisis from senior Democrats like Washington Gov. Jay Inslee — in stark contrast to your boss, who lashed out at Inslee and called him a “snake.” As the New York Times has also reported, some of your former critics at the state level “have changed their mind about Mr. Pence, who has given near-daily briefings and, they said, has become a reassuring presence even as Mr. Trump has intermittently tried to retake the stage.”

Don’t get me wrong: I’m no fan of you or your far-right politics. I am well aware of your long history of challenging the science on everything from climate change to evolution to cancer. But, this time round, you recognize the scale of the problem, the scope of the crisis, the severity of the threat posed by Covid-19.

The president, bizarrely, inexcusably, outrageously, does not. He is off in his own demented, fact-free, navel-gazing, alternative universe. Again, don’t take my word for it. Listen to Bandy X. Lee, clinical professor of psychiatry at the Yale School of Medicine. Trump “dangerously lacks mental capacity,” she told me, “which he exhibits through his inability to take in information and advice, to process critical information, or to consider consequences before making impulsive, unstable, and irrational decisions that are not based in reality but fight reality.” At press conferences, she added, he pushes “delusional-level distortion and misinformation” because he is “disconnected from reality.” His leadership, she concluded, is “more harmful than if we had no president.”

This is a president who rambles, rants, and raves; who spent weeks downplaying the spread of the novel coronavirus and ignoring warnings from his own intelligence agencies; who claimed to be unaware that Americans who need tests are unable to get them; who uses press briefings not to inform the public but to regularly attack the press; who went golfing while health professionals begged for resources and equipment; who has repeatedly contradicted his own top scientists by pushing unproven drugs as a treatment for Covid-19; who tried to buy a vaccine from Germany but only for “exclusive” use in the United States; who took a break from crisis management to go on Twitter and complain about Hillary Clinton’s emails and Benghazi.

How is this behavior not utterly unhinged? How does it not justify you invoking the 25th Amendment on behalf of the American people, who are being infected by Covid-19 in rapidly increasing numbers?

Look, I get it. You’re a sycophant. You’re a coward. You’re afraid of standing up to a vicious boss and his cultish supporters. But ask yourself this: Are you more afraid of Trump and his MAGA base, or for your own life and the lives of those you love and cherish? This past weekend, you and your wife had to get tested for Covid-19. It is only a matter of time until someone you care about tests positive or — God forbid — dies from the disease. In years to come, do you really want to look back on this historic moment and regret not having stepped in, with the clear authority granted to you under the Constitution, to do a better, saner, more stable job of fighting the pandemic than the current occupant of the Oval Office?

Perhaps you think the supermajority required in both chambers of Congress for you to stay in office if the president resists his removal and formally declares in writing “that no inability exists,” makes it impossible for you to successfully invoke the 25th Amendment.

But events are moving fast. Nothing is predictable anymore. And, as Adam Gustafson pointed out in the Yale Law & Policy Review in 2008, under the Section 4 process, “the Acting President can enjoy at least four days of presidential power — four days to advance his own policy goals, to prove himself a capable executive, and to acclimate Congress and the public to his presence in the Oval Office. By the time Congress is allowed to vote, the deck may already be stacked against the President.”

It is also worth noting that in 2016, when Trump picked you as his running mate, the New York Times reported that it was because of your “unimpeachable conservative credentials, warm relationships in Washington and a vast reservoir of good will with the Christian right.” If anyone can persuade Republicans in Congress that Trump has to go, that he is mentally unable to perform his presidential duties during this historic crisis, it’s you.

Remember: The framers of the 25th Amendment deliberately decided against providing a definition of the “unable to discharge” phrase. However, the late Birch Bayh, the senator from your state of Indiana who sponsored the 25th Amendment, made it clear that it related to mental, as well as physical, inability. “It is conceivable,” Bayh said, “that a President might be able to walk, for example, and thus, by the definition of some people, might be physically able, but at the same time he might not possess the mental capacity to make a decision and perform the powers and duties of his office.”

Do you really believe that Trump has the “mental capacity” to protect millions of Americans from this pandemic? A president who tried to prevent dozens of infected Americans on a cruise ship from returning to the United States because, he admitted, “I like the numbers being where they are”?

Remember also: This is a decision for you to make, based on your own insights and experiences, with or without the assistance of medical professionals. “What the framers of the 25th Amendment had in mind was a judgment call by the vice president and by the cabinet,” John D. Feerick, Fordham School of Law’s former dean, told me. Feerick, who assisted in the drafting of the amendment in 1965, pointed out that the framers picked the vice president and “principal officers of the executive departments” for this task because, as a result of their proximity to the president, they would have the greatest insight into the president’s mental health and stability. As high-level political appointees of the president, they would also have the greatest credibility in the eyes of Congress and the public, and could not be automatically dismissed as political opponents or partisans.

You must act now. Extreme times call for extreme measures. Yes, Section 4 of the 25th Amendment has never before been invoked by a vice president. But, then again, as you yourself probably realized long ago, no vice president has ever before had to deal with a president like Trump.

Last October, after your boss glibly suggested he might “destroy and obliterate” the Turkish economy, Daniel Gilbert, professor of psychology at Harvard University, suggested that the president should be detained and examined. “Am I the only psychologist who finds this claim and this threat truly alarming? Wouldn’t these normally trigger a mental health hold? Right and Left must set aside politics and agree that there is a serious problem here,” Gilbert tweeted.

A “serious problem” is an understatement. Millions of American lives are at stake. Yet the American president is out of control, out of touch with reality. You know it. I know it. Anyone with eyes and ears knows it.