Deprived of rallies, Donald Trump has turned the daily White House briefings on the novel coronavirus pandemic sharply political in recent days, seizing the podium from health experts to air grievances, make false promises about drug treatments, and rile up his base.

On Thursday, he was aided in this effort by a bizarre question from Chanel Rion, a Republican political operative who has been granted a White House press pass to represent One America News, a far-right cable channel dedicated to praising Trump.

When the president chose Rion to ask the final question of the briefing, he made it clear that he was expecting a softball, commenting, “OAN. Very good. Thank you very much. They treat me very nicely.”

Rion, who recently accompanied the president’s lawyer, Rudy Giuliani, to Ukraine to publicize conspiracy theories about former Vice President Joe Biden, first asked Trump if he considered the term “Chinese food” to be racist. When he said that he did not, she asked if the president agreed with her assessment that “major left-wing news media, even in this room, have teamed up with Chinese Communist Party narratives” by asking if Trump had incited a racist backlash by labelling the pathogen “the Chinese virus.”

“Is it alarming,” Rion continued, “that major media players, just to oppose you, are consistently siding with foreign state propaganda, Islamic radicals, and Latin gangs and cartels — and they work right here at the White House with direct access to you and your team?”

As the health professionals behind him shifted uneasily, Trump singled out the Wall Street Journal, the Washington Post, and the New York Times for criticism — just as the Chinese Communist Party had two days earlier, when it expelled correspondents from those newspapers for reporting aggressively on China’s handling of the outbreak. After ranting about reports from the newspapers that laid bare his administration’s failure to adequately prepare for the pandemic, or even test for the virus at levels reached by less wealthy countries like South Korea, Trump concluded, “the press is very dishonest.”

“But more than dishonest,” Rion interjected, “they are siding with state propaganda overseas.”

“Well, I think they do,” Trump agreed. “They are siding with China.”

On Wednesday, Rion had appeared on OAN to accuse “CNN and other partisan networks of corrupting the reliability of unnamed sources in the name of anti-Trump political activism.”

After Trump’s performance on Thursday, which also included making the false claim that chloroquine had been approved by the FDA to treat Covid-19, former NPR host Michele Norris suggested on Twitter that she had seen enough.

Okay. This needs to be said. We NEED daily briefings from CDC & public health officials. We NEED to hear from epidemiologists and virologists and disease trackers. These daily rambling WH briefings w/ the chest pounding abt progress don’t assuage fear. Just the opposite.

James Fallows, a journalist who once worked in the White House as President Jimmy Carter’s chief speechwriter, agreed with Norris. “Yes. And cable outlets should stop covering them live,” he wrote. “They’re actively *lowering* level of public knowledge by doing so — and repeating the mistake they made [with] wall-to-wall coverage of rallies in 2015 and 2016.” Without live coverage, Fallows added, “Trump will stop showing up; scientists can speak.”

The president’s bizarre exchange with Rion left many watching reporters aghast, but was likely no surprise to Trump, who was seen embracing the OAN host at Mar-a-Lago earlier this month, an image she proudly shared on Instagram. 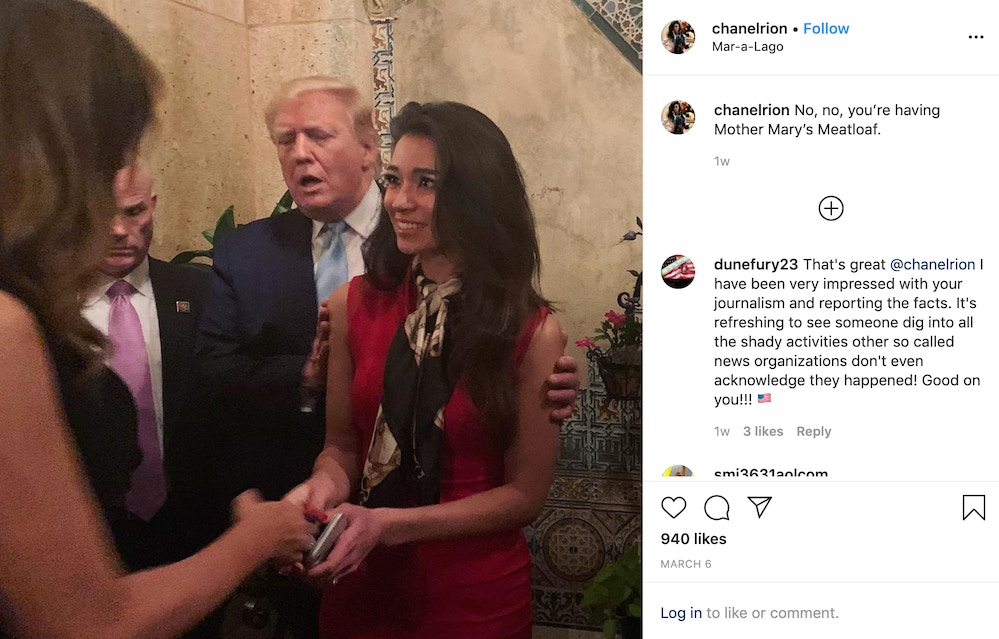 Like the channel she works for, Rion makes little attempt to disguise her political support for Trump. Her social media accounts are filled with pro-Trump posts and photographs of herself with the president’s family, including his daughter Ivanka and daughter-in-law Lara, captioned with fawning remarks.

Before being hired by OAN, Rion tried to help her fiance, Courtland Sykes, secure the 2018 Republican nomination for Senate in Missouri, running on a far-right, pro-Trump platform. Sykes fell short, but not before drawing national attention by denouncing feminists as “she devils” and saying that he expected his future wife to have dinner ready for him every night at 6 p.m.