Donald Trump has created a poisonous new climate in which financial corruption is out in the open and only suckers follow the rules. 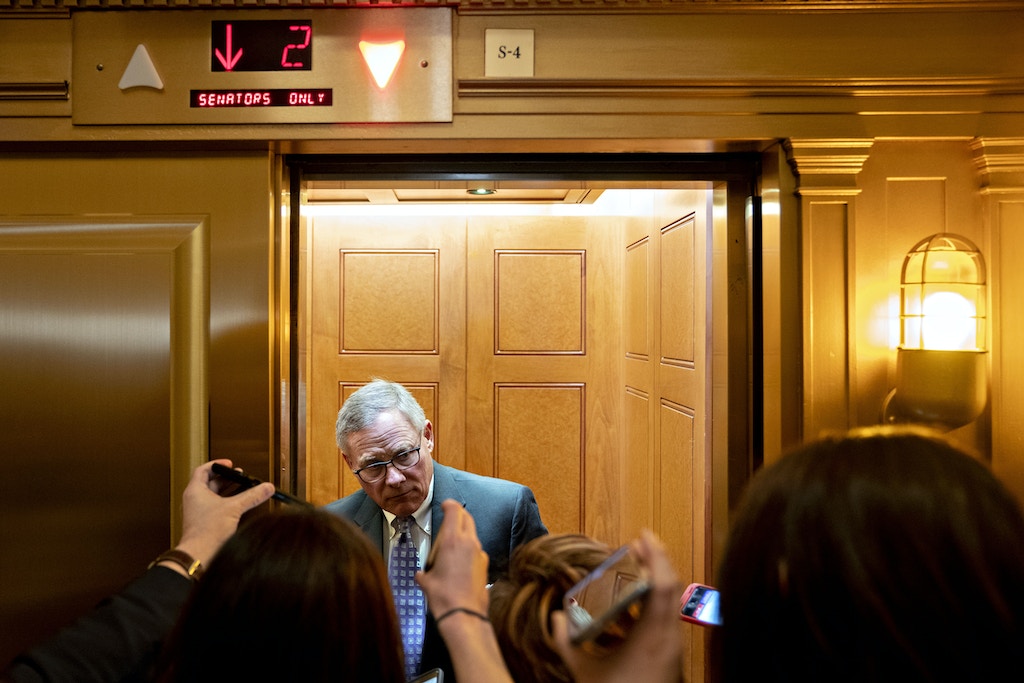 Sen. Richard Burr, a Republican from North Carolina, speaks to members of the media while standing in an elevator at the U.S. Capitol in Washington, D.C., on Feb. 4, 2020.

In the immediate aftermath of the September 11 terrorist attacks, a House Intelligence Committee staffer named Diane Roark was assigned to handle the committee’s oversight of the National Security Agency. Roark developed excellent contacts inside the NSA and soon discovered that in the weeks after 9/11, the agency had launched a secret, illegal program to spy on Americans.

Roark wrote a memo warning the committee’s leadership about the new domestic spying program. She was certain that the chair and ranking member would order an investigation as soon as she told them about it.

But Roark was stunned when the committee’s staff director told her to drop the matter. She was ordered not to talk to anyone, even other committee members, about what she had uncovered.  What Roark didn’t know until later was that the George W. Bush White House had only briefed the “Gang of Eight” – the top House and Senate leaders, including the chair and ranking member of the House intelligence committee — about the NSA program, and those leaders were now complicit in a silent coverup of the illegal operation.

Frustrated, Roark turned in early 2002 to Richard Burr, a North Carolina Republican representative at the time and a backbench member of the Intelligence Committee who had not been briefed on the program. She quietly arranged a private meeting with Burr to tell him about it, and she brought along her NSA contacts to back her up. She was risking her job by ignoring orders to keep silent, but she hoped that Burr would be just as outraged as she was about the NSA program and help her fight back and shut it down.

Sitting in Burr’s congressional office, Roark and the others told Burr in detail what they knew about the NSA program. Burr said almost nothing in response, Roark recalled in an interview for my 2014 book, “Pay Any Price.”

He never talked to Roark about the matter again, she said, and apparently never took any other action to stop the illegal surveillance of American citizens.

Instead of protecting the constituents he served, Burr chose to protect his political career. He displayed cowardice when a courageous whistleblower sought his help. He was rewarded when he was elected to the Senate in 2004 with the full backing of the Republican Party.

Now, 18 years later, Burr has responded to another great national crisis by once again looking out for his own self-interest while ignoring the interests of the American people.

On February 4, Burr, who chairs the Senate Intelligence Committee, received a briefing about how other countries were dealing with the threat posed by the new coronavirus. As a member of the Senate Health, Education, Labor and Pensions Committee, he received another briefing on February 12 from government health experts about the potential impact of an epidemic and whether the U.S. was prepared.

One day later, on February 13, Burr sold 33 stock holdings worth between $628,000 to $1.7 million, according to financial disclosure reports. ProPublica first reported on his stock sales last week. The timing of Burr’s sales allowed him to avoid financial losses when the market later declined in response to the growing Covid-19 threat.

Burr’s stock sales came as President Donald Trump was claiming that the threat of the virus was being hyped by the media and his political opponents.

Publicly, Burr joined Trump and other Republicans in downplaying the threat. But not in private. Last week, NPR obtained a recording of a February 27 talk Burr gave to an exclusive group called the Tar Heel Club, which includes North Carolina political insiders, warning of the potential impact of the virus.

Before the Trump era of blatant corruption, Burr’s actions would most likely have been career-ending and could have led to criminal prosecution. While lawmakers are allowed to trade in stocks and securities, the STOCK Act, passed in 2012, bans them from exploiting nonpublic information for financial gain.

Burr has claimed that he did nothing wrong and has sought to tamp down public outrage over his actions by asking for the Senate Ethics Committee to investigate. But he shows no sign of being willing to resign from the Senate, and given the highly politicized nature of the Justice Department under Trump and Attorney General William Barr, it seems highly unlikely that he will face criminal prosecution.

In fact, the Washington that existed before Trump — the Washington that would have expressed outrage at Burr’s actions — is gone. In 2016, the Republican Party sold its soul and backed Trump. Once he won the presidency, Republican congressional leaders defended his racism, misogyny, lies, and corruption. Republicans have used their control of the Senate to protect him time and again. As a result, Trump has become convinced that he can do whatever he wants with no real consequences.

It was inevitable that the rest of Washington would eventually follow. Now, three and a half years into his presidency, Trump has created a poisonous new climate in which financial corruption is out in the open and only suckers follow the rules.

In fact, Burr was not the only lawmaker who sought to get out of the market early after receiving privileged government information. Transactions by four other senators — Dianne Feinstein, a Democrat from California; Oklahoma Republican James Inhofe; and Georgia Republicans David Perdue and Kelly Loeffler — have also come under scrutiny. Loeffler is married to the chair of the New York Stock Exchange, and they jointly sold stock beginning January 24, the day she attended a Senate briefing on Covid-19.

Between January 24 and February 14, Loeffler and her husband sold 27 stocks worth from $1.28 million to $3.1 million, according to her financial disclosure reports. They also bought stock in a company that provides software for teleconferencing, which has done well since so many Americans are now working remotely.

But Burr’s actions seem worse than any of the others’ because of the special position of trust he holds. As chair of the Senate Intelligence Committee, he is the custodian of many of the government’s most sensitive secrets. This episode inevitably raises questions about whether he may have secretly exploited his post for financial gain in the past as well.