When all of this is behind us, to the extent that it ever can be, let’s not forget what we’ve learned: Congress knows how to spend money when it wants to. 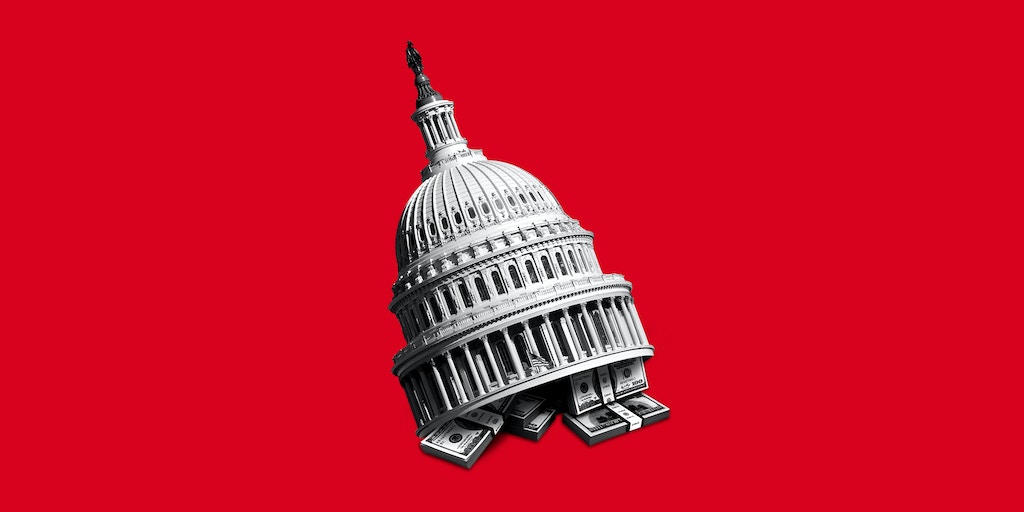 Throughout the Democratic presidential primary, Vermont Sen. Bernie Sanders and Massachusetts Sen. Elizabeth Warren offered a slew of robust proposals to reshape the American economy. Yet the Democratic presidential primary hardly engaged with questions of whether that restructuring was wise, who would benefit, and who would lose. Instead, the debate was dominated in no small part by a single question: “How will you pay for it?”

On Friday, the House of Representatives, led by Speaker Nancy Pelosi who regularly dismissed the ideas put forward by Sanders and Warren as unrealistic, waved away that question, preparing to rubber-stamp a $2 trillion Senate package aimed at staving off economic collapse amid the coronavirus pandemic.

The details of the legislation — particularly the $500 billion, strings-optional corporate slush fund — may be shameful, as Rep. Alexandria Ocasio-Cortez, D-N.Y., who represents the hardest-hit neighborhood of Queens, deemed on the House floor Friday morning, but the moment is instructive. Last week, as it became clear that concerns about deficits and revenue had evaporated, Ocasio-Cortez joined Sanders for a virtual town hall to discuss the global pandemic and the unfolding economic crisis. She raised a number of important points, but one observation touched an especially strong nerve with me.

She was talking about the speed with which the House and Senate have been working to pass spending bills to get cash into the hands of desperate workers, struggling businesses, and major industries:

It’s a fascinating progressive moment because what it’s shown is that all of these issues have never been about ‘how are you going to pay for it?’ It’s never been about whether we have the capacity to do these things or if the logistics have worked out.

All of these excuses that we have been given as to why we cannot treat people humanely have suddenly gone up in smoke and what has been revealed is that all of these issues were really about a lack of political will and who you deemed worthy to be in an emergency or not.

She is outraged. And she should be. Congress has ignored millions of people who have existed in a state of crisis for decades. The people of Flint, Michigan, (and elsewhere) still do not have safe drinking water. Millions of kids go hungry each day. Half a million people, before the pandemic, were homeless on any given night. And on it goes. There has been no multitrillion-dollar spending bill to combat these and other domestic emergencies. Instead, lawmakers have deprived communities of critical investments that could have attenuated their emergencies, often hiding behind the excuse that there isn’t enough money in the budget to deal with problems like these.

.@AOC "And it's actually a fascinating progressive moment, because what it's shown is that all of these issues have never been about how are you going to pay for it. It's never been about whether we have the capacity to do these things or if the logistics have worked out... pic.twitter.com/kkXaIbn2hq

The congresswoman wants everyone to learn what the federal response to the pandemic is teaching us. Because the coronavirus is a threat to all of us — not just the poor — we are choosing to act in ways we always could have acted.

We Always Could Have Acted

How was Congress able to come up with $2 trillion so quickly? Why wasn’t there a knock-down-drag-out fight about how to “pay for” this multitrillion-dollar bill? Where is the money coming from?

Let’s get to the bottom of this.

First, it’s important to understand what it means to say that Congress is “paying for” its spending. I served as the chief economist (for the Democrats) on the U.S. Senate Budget Committee (2015/16). It’s important to understand that those words have a specific meaning in the budget world. When a member of Congress drafts a bill, staffers often shop it around, looking for support from other members of Congress. Inevitably, the first question a staffer is confronted with is, “What’s your pay-for?” For example, suppose a staffer is shopping around a $1 trillion infrastructure bill. Before lending support to the bill, everyone wants to know how the spending is going to be “paid for.” What that means in budget-speak is “How are you going to fully offset the spending so that it doesn’t add to the deficit?” That’s what it means to “pay for” your spending.

This usually involves raising taxes (though it can also be done by carving money out of some other part of the budget, e.g. defense). We did this with a $1 trillion infrastructure bill when I was in the Senate. Our so-called pay-for involved closing tax loopholes that mainly benefit wealthy individuals and large, profitable corporations. Lots of people were eager to do an infrastructure bill, but we couldn’t get enough support for the tax increase, so the bill didn’t pass.

When Congress passes a spending bill that is fully “paid for,” it sends two sets of instructions to the Federal Reserve. The Fed is the government’s fiscal agent — i.e. its bank — and virtually all payments made by (and to) the federal government are handled by the Fed.

The first set of instructions tells the Fed to make certain authorized payments on behalf of the U.S. Treasury. The Fed makes these payments by using a computer to add dollars to bank accounts. If we’re doing a big infrastructure bill, then the government might be paying Caterpillar Inc. for lots of new building equipment and hiring thousands of construction workers, architects, engineers, and so on. Government spending adds dollars to bank accounts.

The second set of instructions tells the Fed to use the computer to subtract dollars from bank accounts. In our example, closing tax loopholes would force people and companies to pay higher taxes.

On balance, “paying for” its spending means that the government instructs the Fed to subtract away (via tax) exactly as many dollars as it adds (via spending) to bank accounts.

That is not what Congress is doing today. Instead of writing a bill that would send two sets of instructions to the Fed, Congress is pushing through a $2 trillion spending bill that will send just one set of instructions. No one is bothering to try to offset — i.e. “pay for” — that spending, because the goal is to get lots of money to people (and companies) without subtracting a lot away. As Rep. Ocasio-Cortez correctly points out, Congress is doing now what it could always have done.

What Has Been Revealed

Think back to 2019, when the political conversation centered around the Democratic presidential primaries and whether we could afford the kinds of ambitious spending proposals being pushed by Sanders or Warren. Neither of them admitted it at the time, but Congress could have canceled student loan debt, lowered Medicare’s eligibility age to zero, or paid to make public colleges and universities tuition-free simply by writing a bill that sent one set of instructions to the Fed. Spending or not spending money is always a political choice.

That’s not to say that Congress can authorize multitrillion-dollar spending bills left and right without ever building in offsets to subtract dollars out of the economy. There are limits.

Spending or not spending money is always a political choice.

But the limits aren’t financial. Uncle Sam can’t run out of dollars. The U.S. government is the issuer of our currency — the U.S. dollar — which means that, unlike Greece, it can never find itself in a situation in which it has bills coming due that it can’t afford to pay. Remember, Greece gave up its sovereign currency — the drachma — and started borrowing in what is effectively a foreign currency — the euro — when it joined the Economic and Monetary Union in 2001. That’s why it (and other) countries in the eurozone experienced a debt crisis and countries like Japan, the U.K. and the U.S. did not.

So what are the limits for a currency-issuing government like the United States? The answer is inflation. The government can’t run out of money, but it can run out of things to buy (including labor). We are constrained by our real resources — i.e. our technical know-how and the available supply of workers, factories, machines, raw materials, and so on. As long as the economy isn’t already operating at full capacity, then it is reasonable for Congress to send just one set of instructions to the Fed.

We could have done that with a number of things the Democrats debated over the last year. For example, Sanders proposed that we cancel $81 billion in medical debt. We could have easily done that without offsets. It would have allowed people who were paying down medical bills to spend some or all of that money on other things. Even if they spent all of it buying consumer goods, the U.S. economy could easily have handled the additional spending. There was no reason to “pay for” that kind of legislation because there was no chance it would have caused inflation to accelerate. The numbers were just too small.

But even bigger things could have been done without so-called pay-fors. Take student debt. Both Warren and Sanders wanted to cancel student loan debt. He would have canceled all of it, and she would have canceled up to $50,000 for 95 percent of the population. Both explained how it could be “paid for.”

Long before any presidential candidate got behind the idea, I worked with a team of economists to analyze the macroeconomic effects of canceling (what was then $1.4 trillion) student loan debt. What we found was that the economy had enough real resource capacity to safely handle a one-time cancellation without the need for offsets. In other words, Congress didn’t need to “pay for” it.

That won’t always be the case. It always comes down to inflation risk. How much can the economy handle — in terms of higher spending — before you need the offsets? That’s the right way to think about the “pay for” question. It’s also the right way to budget our nation’s real resources.

Even before the economic meltdown that is currently underway, there was enough slack in the economy to allow Congress to bring clean drinking water to the people of Flint, to beef up programs that provide nutritional assistance to children, and to build housing for those sleeping on the streets. Congress could have addressed these and other emergencies by writing and passing spending bills without the need for so-called pay-fors. If the votes are there, the money can always be made available.

When all of this is behind us, to the extent that it ever can be, let’s not forget what we’ve learned.