Beating back Ebola required a pitched battle not just against the disease, but also against lies, conspiracy theories, and attacks on public health workers. 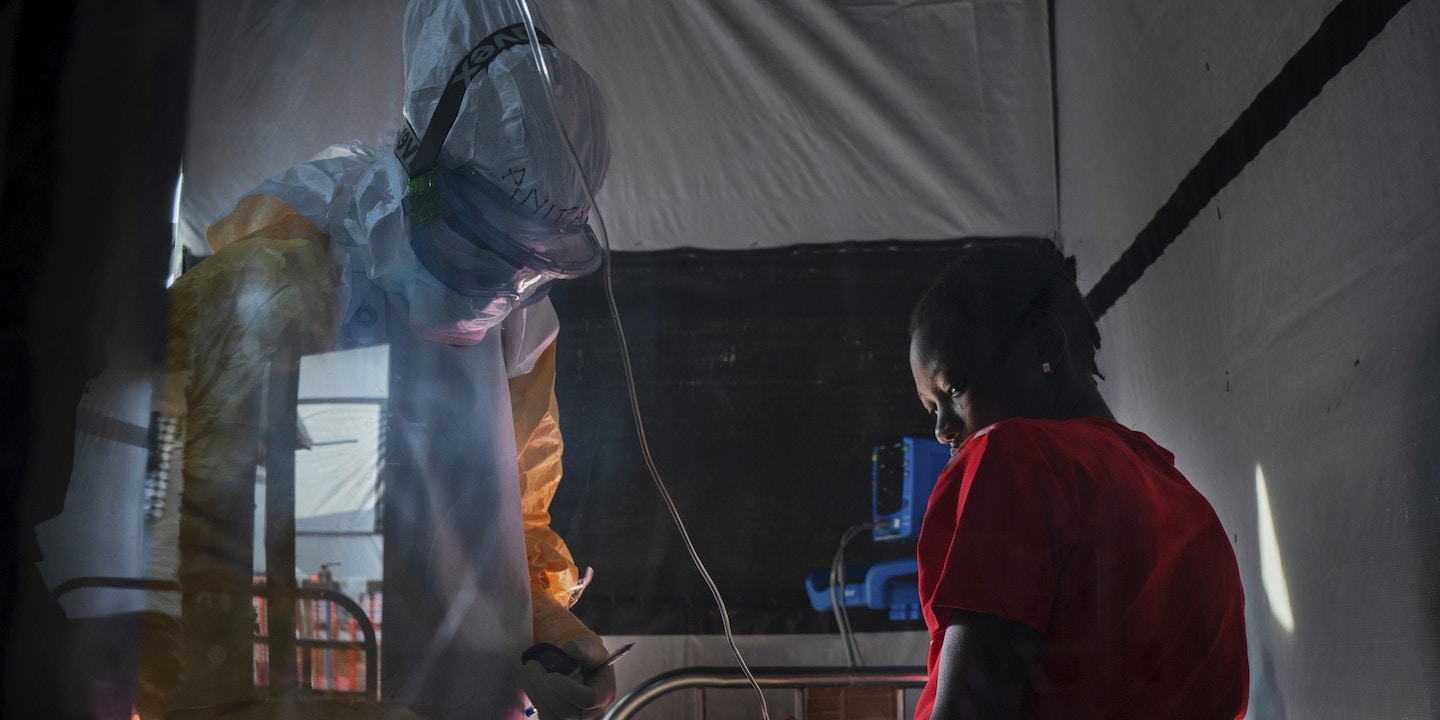 In late March, as cases of Covid-19 sped toward 1 million worldwide and deaths approached 50,000, the Democratic Republic of Congo quietly achieved a public health milestone: Forty days with no new cases of Ebola.

Few noted that victory, but it holds important lessons for the United States as coronavirus skeptics and conspiracy theorists continue to hinder the nation’s response to the pandemic. In Congo, wild rumors and misinformation about Ebola led to attacks on hospitals and health care workers. Beating back the outbreak there involved a pitched battle not just against the disease, but also against lies and widespread distrust of public health officials.

“When you start attacking and killing health care workers, it makes it very difficult to get health care to areas where it’s needed,” Anthony Fauci, the head of the U.S. National Institute of Allergy and Infectious Diseases, told me last year when we discussed the Ebola outbreak in Congo. “But when I say that the main issue is an issue of security, it isn’t security alone. It’s intimately connected with a profound distrust within the society.”

Today, Fauci is the top medical expert on the Trump administration’s coronavirus task force and, in the words of President Donald Trump, a “major television star.” The 79-year-old epidemiologist is also the subject of wild right-wing conspiracy theories about Covid-19 and death threats. He now has a nine-person security detail. Last week, in San Pedro, California, an engineer who espoused a conspiracy theory involving the disease intentionally derailed his freight train, sending it careening toward the USNS Mercy, a Navy medical ship providing relief to hospitals overburdened with coronavirus patients.

“Misinformation hampers efforts to stop transmission of infectious disease wherever it spreads — and it seems to spread even faster than the disease itself,” said Margaret Harris, a World Health Organization spokesperson and medical doctor who helped fight Ebola in Congo and is now working on the Covid-19 response. “It can even lead to dangerous behaviors that increase the likelihood of being infected or failing to get lifesaving treatment.”

“Misinformation hampers efforts to stop transmission of infectious disease wherever it spreads.”

Battling Covid-19 in the United States has been difficult. There were the recalcitrant spring breakers who refused to leave Florida’s beaches. For a time, Kid Rock’s Big Ass Honky Tonk Rock & Roll Steakhouse in Nashville, Tennessee, resisted calls to close. More recently, a Louisiana pastor defied a statewide ban on gatherings of more than 50 people (and White House recommendations that capped the number at 10), hosting more than 1,800 worshippers at a Sunday service.

“The virus, we believe, is politically motivated,” Tony Spell of Life Tabernacle Church in Central City told the local press, while informing his congregation that if any of them contracted Covid-19, he would heal them with divine assistance. Similarly, a Florida megachurch pastor was arrested and charged with unlawful assembly and violation of a public health emergency order after packing two Sunday services with hundreds of worshippers. (He was freed after posting $500 bail.) “The only time the church is closed is when the Rapture is taking place,” said Pastor Rodney Howard-Browne. “God will protect our people.”

Without being aware of it, Howard-Browne and others are echoing the response of doubters during the raging Ebola outbreak in Congo, which officially began in August 2018 and killed 2,264 people. As the epidemic continued to rage a year later, Congolese megachurch Pastor Jules Mulindwa said he could create an antidote to the virus by praying over an ordinary bottle of water. “Then you drink it and you’ll be healed, even if you have Ebola,” he told me.

In Congo, many Ebola conspiracy theories were sparked by poor public health messaging in local communities, said Ida Sawyer, deputy director of Human Rights Watch’s Africa Division. “Mistrust of government actors — due in part to the abusive role of the security forces and prevalent corruption — also made many residents skeptical about the ‘real’ intentions of the government and their international partners leading the response efforts.”

Among the rumors I heard while covering Ebola in Congo was that the virus was part of a Western extermination campaign supported by local elites; that it was tied to an organ theft plot; and that the disease doesn’t even exist. A Lancet study last March found that 92 percent of those surveyed in Eastern Congo had heard misinformation about Ebola, and almost half of all respondents believed at least some of it. Another study found that 72 percent of respondents were dissatisfied with or mistrustful of the Ebola control efforts in the same region, and 12 percent believed that the disease was “fabricated and did not exist in the area.” Still another scientific paper noted that even among 38 people affected by Ebola — from survivors of the disease to front-line health providers — most “strongly denied the existence of the Ebola virus considering it either as a political ploy to exterminate one ethnic group or as a scheme exaggerated for materialistic reasons.”

In Congo, the anti-science resistance also included widespread violence. More than 300 attacks on Ebola health workers left 76 people dead or wounded last year in Congo. An arson attack on an Ebola treatment center in the town of Katwa reportedly killed the brother of a patient; an epidemiologist and two other Ebola health care workers were killed in separate attacks last spring and summer.

“In the U.S., we’ve seen how misinformation has been directly spread by those in the highest levels of power.”

Things haven’t gotten that bad in the United States yet, but prosecutors say the suspect in the alleged attack on the Navy’s hospital ship, 44-year-old Eduardo Moreno, intentionally aimed his train at the USNS Mercy because he believed it “had an alternate purpose related to Covid-19 or a government takeover.” Other outlandish notions have led to threats of violence against Fauci. The infectious disease expert’s willingness to speak frankly, correct Trump’s falsehoods about the coronavirus, and publicly contradict the president have fueled right-wing conspiracy theories that he is in league with Hillary Clinton and deep-state forces to use Covid-19 to trigger an economic collapse that could undermine Trump.

This has fed — and fed off — the rhetoric of numerous conservative pundits who have downplayed the risks of the virus, including radio host Rush Limbaugh, who suggested that Covid-19 is both a Chinese “laboratory experiment that is in the process of being weaponized” and nothing more than “the common cold” relentlessly hyped by the media in an “effort to bring down Trump.”

Trump himself has consistently peddled lies about Covid-19, from his January pronouncement that “we have it totally under control” to a March assertion that “anyone who wants a test can get one.” Like church leaders from Florida to Congo, Trump even seemed to invoke the hope of divine assistance in remarks at the White House in late February. “It’s going to disappear. One day — it’s like a miracle — it will disappear,” he said.

“In the U.S., we’ve seen how misinformation has been directly spread by those in the highest levels of power,” said Sawyer of Human Rights Watch. “This can lead to people not taking the disease seriously, or not knowing who to trust or where to go for reliable information about what should be done to prevent and treat the disease.”

Last month, for example, Trump was advancing the spurious claim that Covid-19 is no more dangerous than seasonal influenza. “We lose thousands and thousands of people a year to the flu,” he said during a Fox News virtual town hall. “But we’ve never closed down the country for the flu.” (Trump has since said, “You can call it a flu,” and three days later, “It’s not the flu.”)

Fauci, meanwhile, shot down the “common flu” argument weeks earlier before the House Oversight and Reform Committee. “People always say, ‘Well, the flu does this, the flu does that,’” he explained. “The flu has a mortality rate of 0.1 percent. This has a mortality rate of 10 times that.” More recently, Fauci cited new models that indicate that even with mitigation efforts, Covid-19 could kill up to 200,000 Americans.

“In the U.S., the framing of Covid-19 as nothing more serious than the flu or something that ‘only’ affects older people has already had negative consequences,” Sawyer told The Intercept, noting that, as in Congo, misinformation can fuel the spread of disease and cost lives. “When people are not well informed, they will not follow the needed health and hygiene measures to treat and contain the disease.”