America and the New Geopolitics After Coronavirus

Depending on how the world responds to the emerging challenges of the coronavirus, we could weather this storm — and maybe even make our societies stronger. The coronavirus pandemic has forced almost every person on the planet to narrow their focus on how to get by day to day. When the dust finally clears and we emerge from our quarantines, we’re likely to find a world whose horizons have been radically transformed. In many ways, the changes will not be good. The pandemic will likely exacerbate some of the most frightening developments usually associated with systemic crises like climate change: a shrinking global economy, state collapse, forced migration in the developing world, and the rise of authoritarianism at home.

It doesn’t have to be that way. Depending on how the world responds to the emerging challenges, we could weather this storm — maybe even making our societies stronger in the process.

“Once the impact of the virus really starts to hit developing countries, we are going to see a whole new crop of instability.”

“Right now, we are experiencing this pandemic as a public health crisis. In a few weeks or months, it is going to become an economic crisis, and by the end of the year, we might be looking at this as a national security issue,” said David Kilcullen, a counterinsurgency expert and author of “The Dragons and the Snakes: How the West Learned to Fight the Rest.”

“Once the impact of the virus really starts to hit developing countries, we are going to see a whole new crop of instability,” Kilcullen warned. “This could be the crisis that reorders the world system. It is unprecedented in its scale and global in its reach.”

Developed countries, including the United States, are looking at massive contractions in their GDPs, which could shrink by as much as 25 to 30 percent in the coming months. But the worst impacts of this economic collapse might be on developing countries. The United Nations Development Programme has warned that the economic cost inflicted by Covid-19 on poorer countries could run as high as $220 billion. In addition to large numbers of people who could die as a result of insufficient medical care and sanitation, the financial impact of the virus absent sufficient outside assistance may prove an impossible burden on countries where social stability had already been precarious.

There is still much that we don’t know about how Covid-19 will spread in the global south. But if populous states in Africa, Asia, and Latin America do come under serious stress and begin to fail, we will see unrest and migration dwarfing that seen over the past decade during the fallout of the Arab Spring.

One way that states may respond to the fear and disorder triggered by Covid-19 would be to take an axe to their cumbersome democracies and embrace authoritarianism. The Hungarian government of Viktor Orbán has already used the crisis to effectively transform itself into a dictatorship. In the United States, the federal government has proposed granting itself stunning powers to indefinitely detain people during national emergencies without charge. Meanwhile, as the crisis rolls on and the U.S. government response continues to look confused and ineffective, a perception is developing, perhaps unfairly, that despite their brutality, authoritarian countries like China are better at managing crises than fractious democracies. 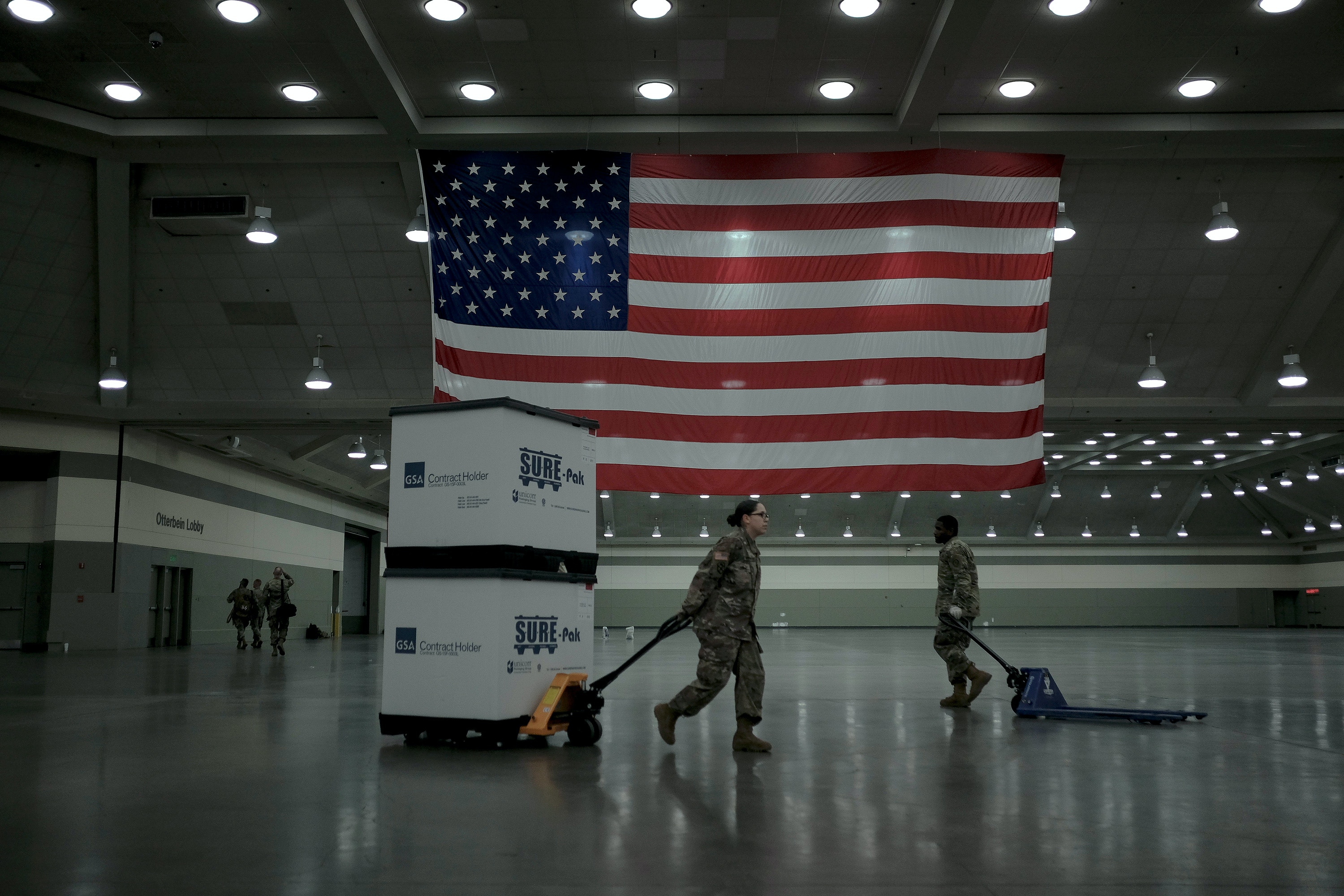 Members of the Maryland National Guard unload crates of beds from FEMA into the convention center in Baltimore, Md., on March 28, 2020. The National Guard set up a 250-bed field hospital in preparation for Covid-19 patients.

The United States was already expecting a period of political uncertainty with a volatile commander-in-chief running for reelection. It is not yet clear how long the current pandemic will continue or whether draconian social-distancing measures will be required in response to a new wave of the disease in fall. Even before Covid-19, there were questions about the fairness of the vote and how President Donald Trump might behave if his hold on office looks to be threatened in November. With the onset of the pandemic, the danger of possible instability as a result of his behavior is looking much greater.

“If the pandemic continues through November, some observers will worry that any reported results of the election are suspect due to the circumstances under which the voting is conducted,” said Stephen Walt, a professor of international affairs at Harvard University’s John F. Kennedy School of Government. “If the outcome is close, or if both sides claim to have won, there could be a serious disruption of the electoral process. And for the first time in our history, we also have an incumbent president who might well use this situation as an excuse to maintain his hold on power.”

To put it mildly then, the political road ahead has some dangers on it. In the immortal words of Homer Simpson, however, these challenges also raise the possibility of “crisitunity.”

Across the political spectrum in the U.S., economic responses to the crisis are being discussed that would have been considered fanciful not long ago, including expanding welfare state protections and investing in national infrastructure. Many of these changes were sorely needed, but as the full scale of the crisis makes itself visible, it is becoming possible to envision these investments as part of our national security — always a good way to get the budgetary taps flowing.

”National strength rests first and foremost with domestic strength, and one thing the crisis affords is the chance to engage in ‘military Keynesianism’ by funneling money from the Department of Defense budget to infrastructure and categorizing it as national defense,” said Matthew Schmidt, an associate professor of national security and political science at the University of New Haven. “We should prioritize catching up with the rest of the world in terms of public transit, education, and our health care system, all of which are showing signs of strain. It is still politically difficult to make changes like this, but, at the moment, there’s probably the best chance there has been in decades.”

It goes without saying now that the U.S.’s initial response to the coronavirus was botched. Despite having months to prepare, the pandemic rolled across the country before adequate testing and infrastructure could be put in place to manage it effectively. The mismanagement no doubt contributed to the death toll and will likely kill many more. But the crisis is not over. There is still space for federal and state governments to demonstrate competence and capability to manage the crisis effectively. 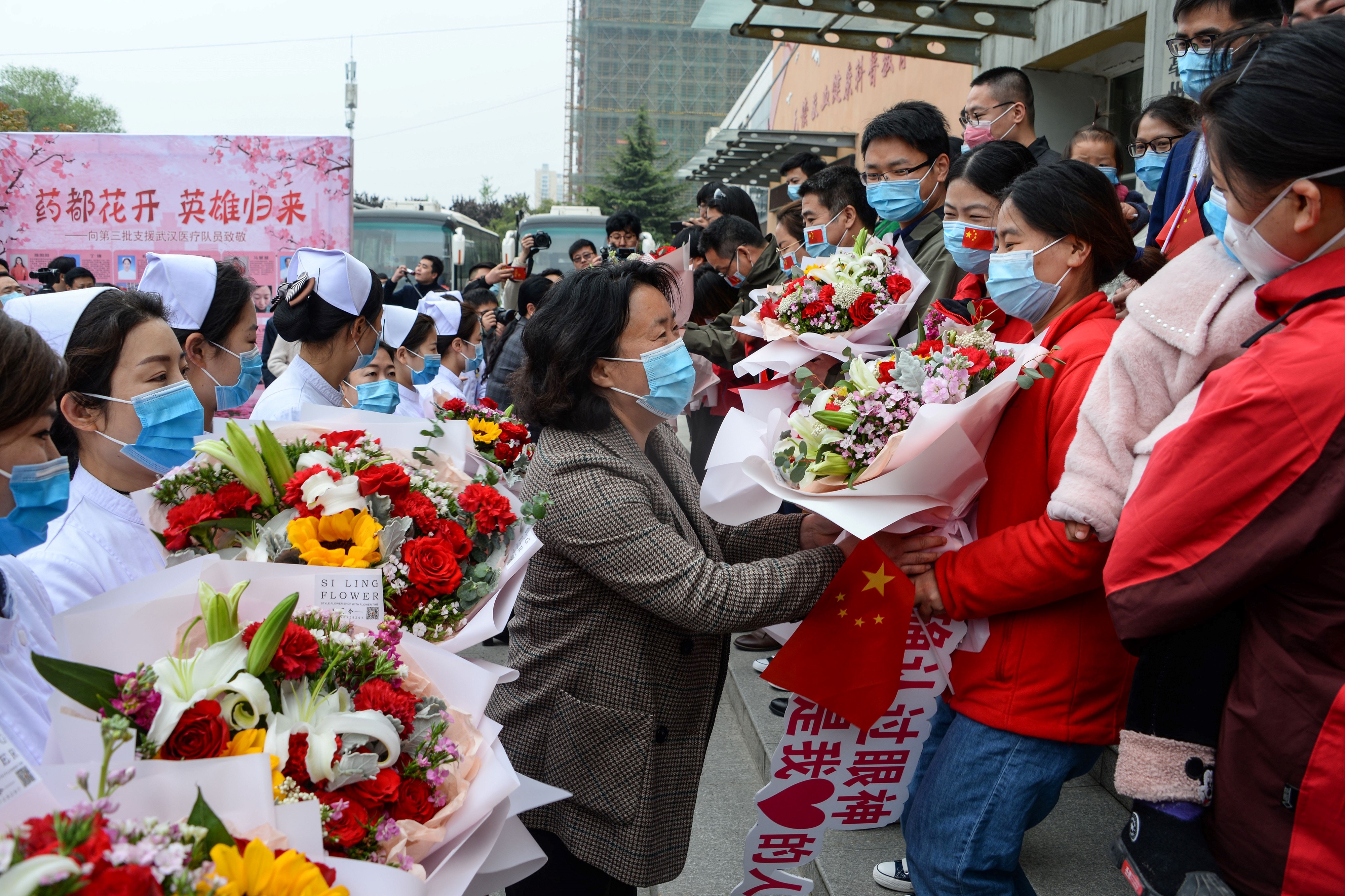 Medical staff members receive flowers after returning home to Bozhou, in China’s eastern Anhui province, on April 10, 2020, from Wuhan after helping with the Covid-19 recovery effort.

The extent to which American authorities succeed in the weeks and months ahead will make a difference to Americans, but also to countries around the world that will be watching and comparing the results generated by large democracies like the United States against authoritarian governments like China. How other countries perceive the relative success of these two models will go a long way in determining the shape of their own politics. If the U.S. manages to get the pandemic under control at home, it will also be in a position to help mitigate the worst impacts in the developing world. An important step that could be taken right away would be lifting sanctions on Iran that have crippled its ability to contain the virus.

“This global crisis itself would not have even occurred had local officials in China not lied about its seriousness.”

Despite how things might look right now — and depending how we act — there are still strong reasons to resist the authoritarian temptation.

“My mind boggles when I see people in the West look at the Chinese response to this pandemic and think that they have done a good job,” said Martin Gurri, a former CIA analyst and author of “The Revolt of the Public.” “This global crisis itself would not have even occurred had local officials in China not lied about its seriousness. The only question at present is whether national leaders there were duped by their own statistics or were complicit in the coverup.”

“The democracies have been very confused and haven’t handled their response as well as they could have,” Gurri added. “But we should not mistake that with the terrible politicization that happens in authoritarian countries, where the first question that governments ask in response to a crisis is not how to stop it, but how to frame it in a way that makes them look as good as possible.”