The Coronavirus Is Killing Iranians. So Are Trump’s Brutal Sanctions.

Millions of Iranians could lose their lives from the novel coronavirus outbreak. The Trump administration has refused to budge. 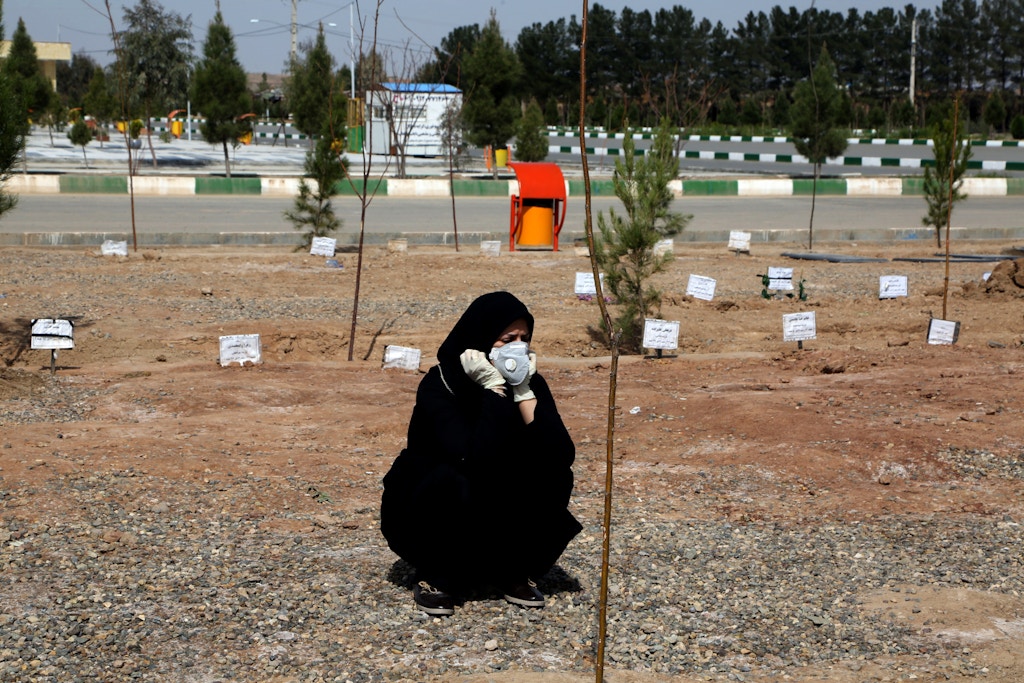 A woman mourns during a funeral held at Beheshte Masoumeh Cemetery for the victims of the new coronavirus in Qom, Iran, on March 17, 2020.

The U.S. government is run by sociopaths.

How else to explain the Trump administration’s callous disregard for the lives of ordinary Iranians in the midst of this global coronavirus crisis? How else to make sense of U.S. officials doubling down in their support for crippling economic sanctions on the Islamic Republic, despite the sheer scale of the suffering?

The spread of Covid-19 has been nothing less than a catastrophe for the people of Iran. On Monday, Iranian officials reported another 129 fatalities, “the largest one-day rise in deaths since it began battling the Middle East’s worst outbreak.” Dozens of Iranian government officials, parliamentarians, and religious leaders have lost their lives to the disease. The death toll now stands at 988, and the total number of cases has crossed 16,000 — roughly, nine out of every 10 cases in the Middle East! Globally, only China and South Korea have had more confirmed cases and yet, as the AP notes, the real number in Iran “may be even higher.”

To be clear: A lot of the responsibility for the death and suffering in Iran has to lie with the Iranian government, which has been grotesquely incompetent and deeply dishonest. “The official response was glaring denial of the magnitude of the crisis,” wrote Iranian doctors (and exiles) Kamiar and Arash Alaei in the New York Times earlier this month. The country’s supreme leader, Ayatollah Ali Khamenei, they noted, even “accused the country’s enemies of exaggerating the threat of the coronavirus.”

Nevertheless, U.S. sanctions on Iran, which have had a devastating impact on the economy, have made things much worse. The government has been forced to request an emergency $5 billion loan from the International Monetary Fund while Iranian President Hassan Rouhani has written to several world leaders to tell them how his country’s fight against the coronavirus has been “severely hampered by US sanctions.” His foreign minister Javad Zarif accused the U.S. government of “medical terrorism.”

The Trump administration — in the form of Treasury Secretary Steve Mnuchin — continues to insist that sanctions do not prevent humanitarian aid. This is, technically, correct. Yet as Human Rights Watch pointed out in October 2019, months before the novel coronavirus outbreak in Iran, “while the US government has built exemptions for humanitarian imports into its sanctions regime … in practice these exemptions have failed to offset the strong reluctance of US and European companies and banks to risk incurring sanctions and legal action by exporting or financing exempted humanitarian goods.” The result, concluded the human rights group, “has been to deny Iranians access to essential medicines and to impair their right to health.”

Imagine being both so cruel and so unreasonable that you make George W. Bush and Dick Cheney look compassionate and reasonable in comparison.

In fact, as the Atlantic Council noted in May 2019, “despite the fact that sanctions exempted humanitarian goods, the US Treasury Department had previously prosecuted medical companies for selling small amounts of medical supplies to Iran, which in turn, has had a deterring effect on other companies doing business with Tehran.”

So it is any surprise, then, that Iranian suppliers of respiratory masks, surgical gowns, and ventilators are now saying they are out of stock? Or that the Iranian government is struggling to import the raw materials that it needs to manufacture antiviral drugs?

In late February, the Trump administration made a minor adjustment to the sanctions regime and allowed some humanitarian aid to arrive in Iran in coordination with the Swiss government. Sanctions relief, however, needs to go much further and much faster. As Rep. Ilhan Omar, one of the few progressive foreign policy voices on Capitol Hill, tweeted last week: “We need to suspend these sanctions before more lives are lost.”

She’s right. And there is precedent here: When a massive earthquake killed 26,000 people in the city of Bam, in southeastern Iran, in December 2003, the Bush administration allowed for a temporary suspension of sanctions. As journalist Negar Mortazavi has recounted, “multiple U.S. military planes landed in Iran for the first time since the 1979 revolution” and “transferred over 150,000 pounds of medical supplies and more than 200 civilian personnel from Boston, Los Angeles, and Fairfax County in Virginia, to assist Iran in search and rescue, emergency surgery, and disaster response coordination.”

Yet the Trump administration has refused to budge. Imagine being both so cruel and so unreasonable that you make George W. Bush and Dick Cheney look compassionate and reasonable in comparison.

On Monday, the Chinese and Russian governments demanded the U.S. suspend sanctions on Iran as a result of the pandemic. The Chinese foreign ministry called on the U.S. to “immediately lift unilateral” sanctions on the Islamic Republic, which it described as undermining the “delivery of humanitarian aid by the UN and other organizations.” Referring to “illegal” and “anti-human” U.S. sanctions, the Russian government accused Washington of “purposefully” cutting off millions of Iranian citizens “from the possibility of purchasing necessary medical supplies.”

Yet, again, the Trump administration has refused to budge. Imagine being both so cruel and so out of step with the international community that the Chinese and Russian governments have the moral high ground over you.

The unilateral reimposition of U.S. sanctions on Iran in 2018 was a clear violation of international law, according to the International Court of Justice. It was not mandated by the U.N. Security Council, and the U.N. Special Rapporteur on the effect of sanctions on human rights has since slammed the Trump administration’s “illegal and immoral forms of coercion,” calling it an “economic attack” on the Iranian people.

Of course, an attack on the Islamic Republic is what the hawks in Washington have always craved. On Sunday, Trump’s former national security adviser John Bolton was once again agitating for a new war with Iran. Meanwhile, Bolton’s former colleagues over at the neoconservative pressure group United Against Nuclear Iran, as Eli Clifton revealed, have been “urging major pharmaceutical companies to ‘end their Iran business,’ focusing on companies with special licenses — most often under a broadly defined ‘humanitarian exemption’ — to conduct trade with Iran.”

There is only one word to describe such behavior: sociopathic. Millions of Iranians, remember, could lose their lives from the virus.

But we have been here before. Brutal U.S. sanctions on Iraq in the 1990s caused the deaths of hundreds of thousands of innocent Iraqi children. Multiple senior U.N. humanitarian officials quit in protest of the policy, with one of them denouncing it as “genocide.”

And the U.S. government’s response? “We think the price is worth it,” declared then Secretary of State Madeleine Albright.

As ordinary Americans line up at grocery stores and pharmacies across the United States to stock up on prescription medications, do they have any clue that their Iranian counterparts are being denied medicines and basic goods because of U.S. government policy? And as the number of deaths in Iran from Covid-19 continues to soar, exacerbated by a horrific U.S. economic embargo, do ordinary Americans think the price is worth it?