The far right is trying to weaponize Covid-19 against Muslims, blaming them for spreading the virus. Of course this is ridiculous. 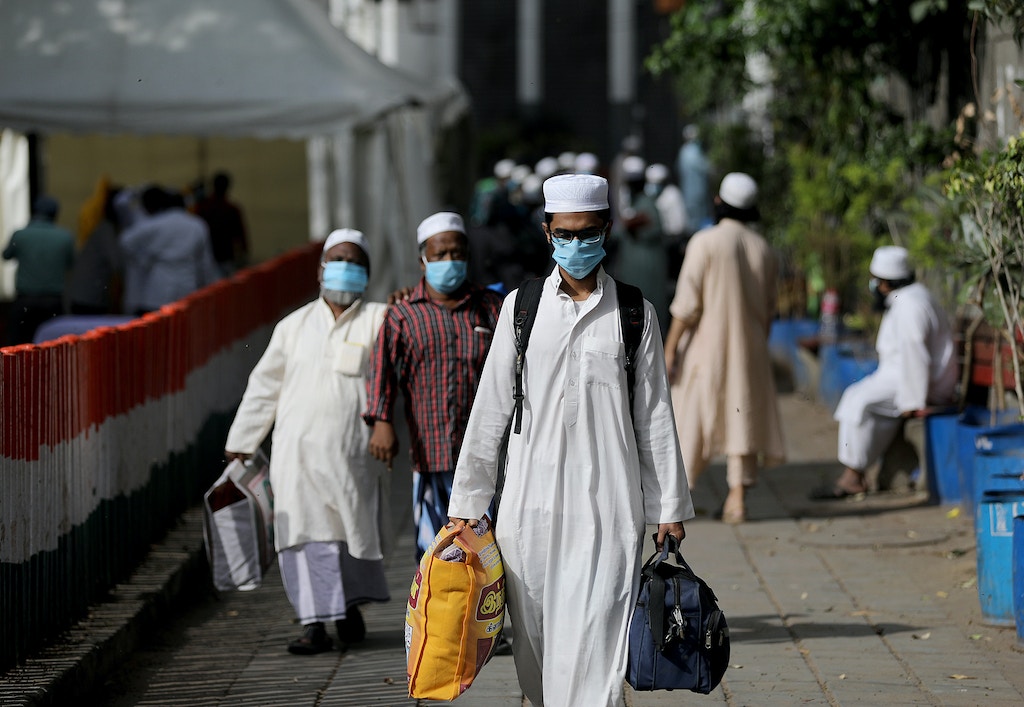 Muslims wearing protective face masks leave an Islamic seminary to board a special service bus that will take them to quarantine facility amid concerns about the spread of the Covid-19 in Nizamuddin area on March 31, 2020, in New Delhi, India.

How else to explain the fact that a pandemic of global and historic proportions, a novel coronavirus that is infecting people in almost every country and territory on Earth, has been weaponized by the far right to attack … Islam and Muslims?

Take India, where the spread of the virus has been dubbed a “corona jihad” by supporters of the far-right BJP government; they  claim the pandemic is a conspiracy by Muslims to infect and poison Hindus. The government itself has blamed around a third of India’s confirmed Covid-19 cases on a gathering held in Delhi by a conservative Muslim missionary group called the Tablighi Jamaat; one BJP minister called it a “Talibani crime.” As The Guardian reports, “Muslims have now seen their businesses across India boycotted, volunteers distributing rations called ‘coronavirus terrorists’, and others accused of spitting in food and infecting water supplies with the virus. Posters have appeared barring Muslims from entering certain neighbourhoods in states as far apart as Delhi, Karnataka, Telangana and Madhya Pradesh.” There have even been reports of Indian Muslims being attacked, beaten, and lynched.

Did members of the Tablighi Jamaat behave recklessly? Yes. Do all of India’s 200 million Muslims bear responsibility for their behavior? No. “Virtually overnight,” wrote investigative journalist Rana Ayyub in the Washington Post, “Muslims became the sole culprits responsible for the spread of the coronavirus in India.”

But it isn’t just Hindu nationalist politicians or mobs. The country’s respectable press have joined in too. The left-leaning newspaper The Hindu published a cartoon showing the world being held hostage by the coronavirus — with the virus itself depicted wearing clothing associated with Muslims. (The paper later apologized for its “completely unintentional” decision to link the crisis to Muslim terrorists, and replaced it with a more neutral image.)

"The Hindu" news paper displays a cartoon of Corona virus with Muslim attire. What does this indicate. Are not these blood thirsty mainstreams done with Muslim hatredness?
Condemn #Islamophobia pic.twitter.com/pci9ELTMlV

The 24-hour news channel India Today ran an undercover investigation into so-called madrasa hot spots where the virus is allegedly being spread, and also posted a graphic on the number of Tablighi Jamaat-linked cases over an image of a Muslim prayer cap. “This is not journalism, this is hatemongering,” responded left-wing activist Kavita Krishnan, in a viral video. “History will remember you, history will judge you.”

She’s right. Over in my home country, the U.K., counterterrorism police have been “investigating far-right groups accused of trying to use the coronavirus crisis to stoke anti-Muslim sentiment,” according to a recent report in The Guardian.

These groups have been assisted by prominent far-right personalities, such as former radio shock jock Katie Hopkins, who suggested that U.K. police should physically assault any Muslims found praying in public, and English Defence League founder Tommy Robinson, who shared a video allegedly showing British Muslims attending prayers at a “secret mosque” — a video later debunked and dismissed by local law enforcement officials.

Tell Mama, an organization that monitors anti-Muslim hate crimes in the U.K., has documented numerous examples of British Muslims being harassed in recent weeks, including a hijab-wearing Muslim woman in south London who said she was approached by a man who “got in her face” to cough at her and claimed he had the coronavirus, while also hurling racial abuse at her.

Again, as in India, it isn’t only far-right figures using the pandemic to fan the flames of anti-Muslim bigotry but also mainstream media outlets. In a tweet on March 23, The Economist promoted a story on the Maldives by declaring that “the arrival of covid-19 was expected. The spread of radical Islam has been more of a surprise.”

Continue to look for ways that some media outlets instrumentalize #COVID?19 to heighten #Islamophobia.

Thanks to @Rowaida_Abdel for grabbing this screenshot before @TheEconomist took down the story and the tweet. pic.twitter.com/ysVqZz84H1

The magazine has since taken down the tweet — but not the story itself.

Meanwhile, high-profile journalists in the U.K. and France have tried to use the forthcoming month of Ramadan to fearmonger about Muslims in the West breaking social distancing guidelines and spreading the virus. There is zero evidence, however, that Muslims in the U.K. or France are in favor of relaxing the guidelines or planning on reopening mosques in defiance of them. (And for the record, it was a Christian, not a Muslim, woman who told CNN she would be defying social distancing guidelines and attempting to attend a religious gathering because she was protected by holy blood!)

Here in the United States, too, the far right is mobilizing and trying to exploit the coronavirus to spread hate and violence. In March, the FBI fatally injured Timothy Wilson, an anti-government extremist, who was planning to bomb a Kansas hospital “that was providing critical care during the current coronavirus pandemic.” He had previously planned to attack, among other targets, “Islamic centers.”

He was no “lone wolf.” Homeland Security officials in New Jersey say neo-Nazi groups have been encouraging their supporters “to incite panic while people are practicing social isolation during the Covid-19 outbreak, which includes discharging firearms in cities and putting bullet-sized holes into car windows.”

As in the U.K. and India, such groups can take aid and comfort from well-known conservative media figures. “You think Covid-19 is bad?” wrote author and radio host Neal Boortz to his 200,000-plus followers on Twitter. “Give me a break. Wait until Muslims hit critical mass in America. You’ll look back on these times fondly.”

Los Angeles Times reporter Johana Bhuiyan, however, had a perfect response to the boorish Boortz:

Sweetie everyone’s already washing their hands five+ times a day, covering their face, not shaking hands + avoiding bars. Not only are we already here, you’re all Muslim. Salam brother. https://t.co/m6MDbyRrWs

Here is the great irony: While anti-Muslim bigots have tried to use the coronavirus to smear and demonize Muslims, the pandemic itself has exposed the ridiculousness of anti-Muslim bigotry.

The French and Austrian governments passed bans on face masks, in 2011 and 2017 respectively, as a way of targeting, and criminalizing, the wearing of the Muslim face veil, the niqab. Today, France’s National Academy of Medicine is calling for masks to be made obligatory for anyone leaving their homes during the lockdown, while the Austrian government has made wearing face masks compulsory for anyone entering a supermarket or grocery store.

In 2018, the Danish government insisted on making new citizens shake hands at their naturalization ceremonies — a move which, as the New York Times noted at the time, was “aimed at Muslims who refuse on religious grounds to touch members of the opposite sex.”

So you might assume the Danes had dropped that mandatory handshake now, right? Wrong. According to the Times, “the government in Denmark has asked mayors to suspend naturalization ceremonies … with no exception to the handshake for those who want to become citizens.”

We may defeat the Covid-19 virus in the months ahead, but it will take much longer to defeat the disease that is Islamophobia.