Donald Trump tricked the news networks into broadcasting a taxpayer-funded testimonial to his own leadership, but the video highlight reel had a fatal flaw. 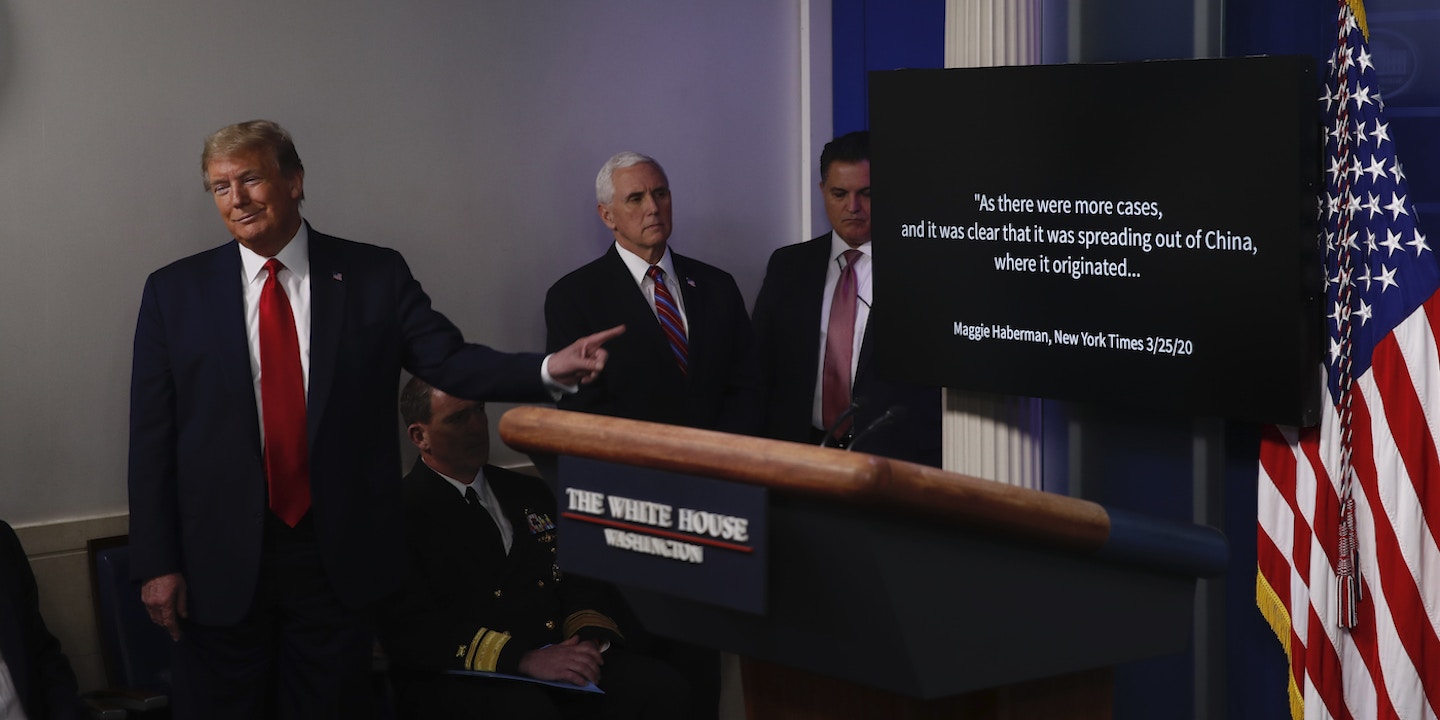 Donald Trump smiled on Monday as he tricked the news networks into broadcasting a taxpayer-funded testimonial to his own leadership, in the form of a video highlight reel of presidential statements on the coronavirus crisis, set to stirring music, unveiled during the president’s 29th daily briefing on the pandemic.

WATCH: Here was the scene in today's #PressBriefing when President Trump aired what @CNN has labeled a propaganda video. pic.twitter.com/ZMaYDL6YVu

The video, which was riddled with errors and deceptively edited, was apparently intended to rebut a damning report on the front page of Sunday’s New York Times that detailed how slow Trump had been to take the threat posed by the virus seriously. While Trump was obviously pleased by the production — he pointed to the screen with a look of smug triumph at several points — he seemed unaware as it was unspooling in the White House briefing room that it contained a fatal flaw that helped reinforce the central argument of The Times report.

The compilation of clips, selected by the White House social media director, Dan Scavino, attempted to create an alternative history of the first months of the crisis, according to which the American media initially “minimized the risk,” but the president “took decisive action” nonetheless, only to be unfairly maligned by his political opponents, before the nation’s governors came together to sing his praises.

The centerpiece of the video was a timeline of actions by Trump and his administration, highlighting the partial ban on travel from China he ordered on January 31, and his declaration of a national emergency on March 13. A screenshot of a White House video timeline of the coronavirus crisis.

But, as CBS News correspondent Paula Reid pointed out to Trump after the video ended, there was a huge gap in the timeline: It mentioned absolutely no action by him in February and there was, as the Times had noted, a period of “six long weeks” after the travel restrictions until he “finally took aggressive action to confront the danger the nation was facing.”

In fact, the only entry on the video timeline for February — the month Trump held mass campaign rallies and described criticism of his handling of the virus from Democrats as “their new hoax” — was February 6: “CDC Ships First Testing Kits.” The fact that those test kits were defective, a massive failure at a critical moment, seems like an odd thing to brag about.

Well into March, Trump was downplaying the new coronavirus as no more threatening than the flu.

Having seemed so pleased with himself while the video was playing, Trump looked stunned by Reid’s observation that its timeline showed the period of inaction the Times had described. “The argument is that you bought yourself some time,” by imposing the partial travel ban from China, Reid noted. “You didn’t use it to prepare hospitals, you didn’t use it to ramp up testing.”

.@PaulaReidCBS presses Pres. Trump about his administration's early actions on the coronavirus, after he spent the beginning of his press conference complaining about his media coverage https://t.co/ySmFq3sUis pic.twitter.com/iKuTfTqg4I

As Trump interrupted to denounce her as “so disgraceful,” the correspondent pressed on to ask what, exactly, Americans were supposed to take away from his gauzy video tribute to himself? “Right now nearly 20 million people are unemployed. Tens of thousands of Americans are dead. How is this sizzle reel or this rant supposed to make people feel confident in an unprecedented crisis?”

Trump had no response but to shift back to praising himself for restricting travel from China in January. “But what did you do with the time that you bought?” Reid asked. “The month of February… the video has a gap.”

After the briefing, Eric Lipton, one of the authors of the investigation that so enraged Trump, observed on Twitter that nothing in the video or the president’s comments “undermines even a single fact in the stories we published over the weekend.”

“The truth remains that the nation’s top health advisers concluded as of Feb. 14 that the U.S. needed to use targeted containment efforts to slow the virus spread,” Lipton added. “Trump then waited until March 16 to announce his support for these measures.”

The inadvertently revealing timeline was not the only flaw with the propaganda video produced by Scavino, Trump’s former caddie.

It began with a sequence lifted directly from the March 26 edition of Sean Hannity’s Fox News show: a series of clips of medical experts for ABC, NBC, and CBS wrongly predicting in late January and early February that Americans would not be badly hit by the virus. Those clips seemed to be included as an effort to embarrass reporters from those networks, but the statements of those TV doctors at the time echoed almost exactly the public messaging of Trump’s hand-picked CDC director, Dr. Robert Redfield, who said at a coronavirus task force briefing on January 31: “I want to emphasize that this is a serious health situation in China, but I want to emphasize that the risk to the American public currently is low.”

That opening montage also includes a misleadingly edited clip of Hannity asking Dr. Anthony Fauci, director of the National Institute of Allergy and Infectious Diseases and presidential adviser, in January if American experts might go to China if the coronavirus outbreak there was worse than expected. In March, Hannity tried to claim that this was proof that he had “warned” of a pandemic. In fact, before that clip was edited, it showed that Hannity had just been asking Fauci about sending American experts to China to “help them out to try to contain this” there. Like Trump, Hannity had spent all of February comparing Covid-19 to the seasonal flu, and by the end of March, he too was backpedalling furiously.

Another bizarre aspect of that sequence is that it ends with Dr. David Agus, a CBS News medical correspondent, stating on Feb. 8 that “coronavirus is not going to cause a major issue in the United States.” Agus is now a major proponent of the experimental use of the anti-malarial drug hydroxychloroquine to treat Covid-19 and has reportedly spoken directly with Trump about the possible benefits of the treatment that the president has become fixated on.

In choosing to feature that soundbite from Agus, Hannity’s producers, and the White House, also chose not to mention an earlier CBS report which had clearly raised the possibility that the coronavirus could be a serious threat to Americans. That report, broadcast on Jan. 28, featured an interview with Fauci by the network’s chief medical correspondent, Dr. Jon LaPook. “You don’t want to frighten the American public, but you need to prepare for, and assume, that this is going to be a real serious problem,” CBS viewers heard Fauci tell LaPook that morning. “We have to prepare for the worst, always, because if you don’t, and the worst happens, you’re behind the 8-ball.”

The @CDCgov has issued its strongest travel warning, urging Americans to avoid all nonessential travel to China.@CBSNews Chief Medical Correspondent Dr. Jon Lapook (@DrLaPook) joins us to discuss the ongoing research of the coronavirus. pic.twitter.com/Tl0GEjnrSA

The third section of the video — about Trump’s supposedly unfair treatment by political opponents — takes audio of Times correspondent Maggie Haberman out of context to distort its meaning. Haberman was one of six reporters who wrote the article that angered Trump. In an interview with “The Daily” podcast in March, Haberman did call Trump’s order to slow travel from China “a pretty aggressive measure against the spread of the virus,” but the White House edit omitted what she said immediately after that. “The problem is, it was one of the last things that he did for several weeks.”

Here’s the full exchange with ?@mikiebarb?, in which I compared the president’s behavior around the a China travel limitations to the Bush “Mission Accomplished” moment. pic.twitter.com/nq8t43JnuT

That same sequence included two false annotations in on-screen text of other statements by Haberman about Trump’s partial ban of travel from China. When she said, “He was accused of xenophobia,” an image of Joe Biden appeared, over the date March 12. Biden, however, was not referring to Trump’s travel ban in a speech he gave on that date; he was criticizing Trump’s nativist reference the day before, when he had shut off travel from most of Europe, to what the president called the “foreign virus.”

“Downplaying it, being overly dismissive or spreading misinformation is only going to hurt us and further advantage the spread of the disease, but neither should we panic or fall back on xenophobia,” Biden said. “Labeling Covid-19 a foreign virus does not displace accountability for the misjudgments that have been taken thus far by the Trump administration.”

The fact that Trump subsequently made a point of calling the new coronavirus “the Chinese virus,” inciting hatred of Asians and Asian Americans even in his own White House, makes his claim to have been falsely accused of xenophobia all the more absurd.

Moments later in the video, as Haberman said, “He was accused of making a racist move,” an image of Nancy Pelosi appeared, over a citation to The Hill from January 31. However, as the report in The Hill makes clear, Pelosi had, in fact, been referring to another travel ban issued by Trump that day — “adding Myanmar, Eritrea, Kyrgyzstan, Nigeria, Tanzania and Sudan to the travel ban that the President instituted three years ago” — when she denounced him for imposing “such biased and bigoted restrictions.”

The news conference on Monday, which brought the president’s time in the briefing room in the past month to more than 40 hours, was yet another example of Trump hijacking for his own ends what was previously a news conference dedicated to conveying vital information about a public health emergency. The president, however, seems to regard the free time on television each day as primarily an opportunity for self-promotion.

That was made clear at one stage when Trump told reporters that, after watching the video, “Most importantly, we’re going to get back on to the reason we’re here: which is, the success we’re having.”

Updated: Wednesday, April 15, 4:18 p.m. EDT
This article was updated to add a reference to a report from “CBS This Morning” on Jan. 28 in which Dr. Anthony Fauci told the network’s chief medical correspondent that it was important for the United States to prepare at that time for the coronavirus to be a serious problem, “because if you don’t, and the worst happens, you’re behind the 8-ball.”