Faced with the coronavirus pandemic and dangerous working conditions, medical residents are overworked, scared, and beginning to organize. 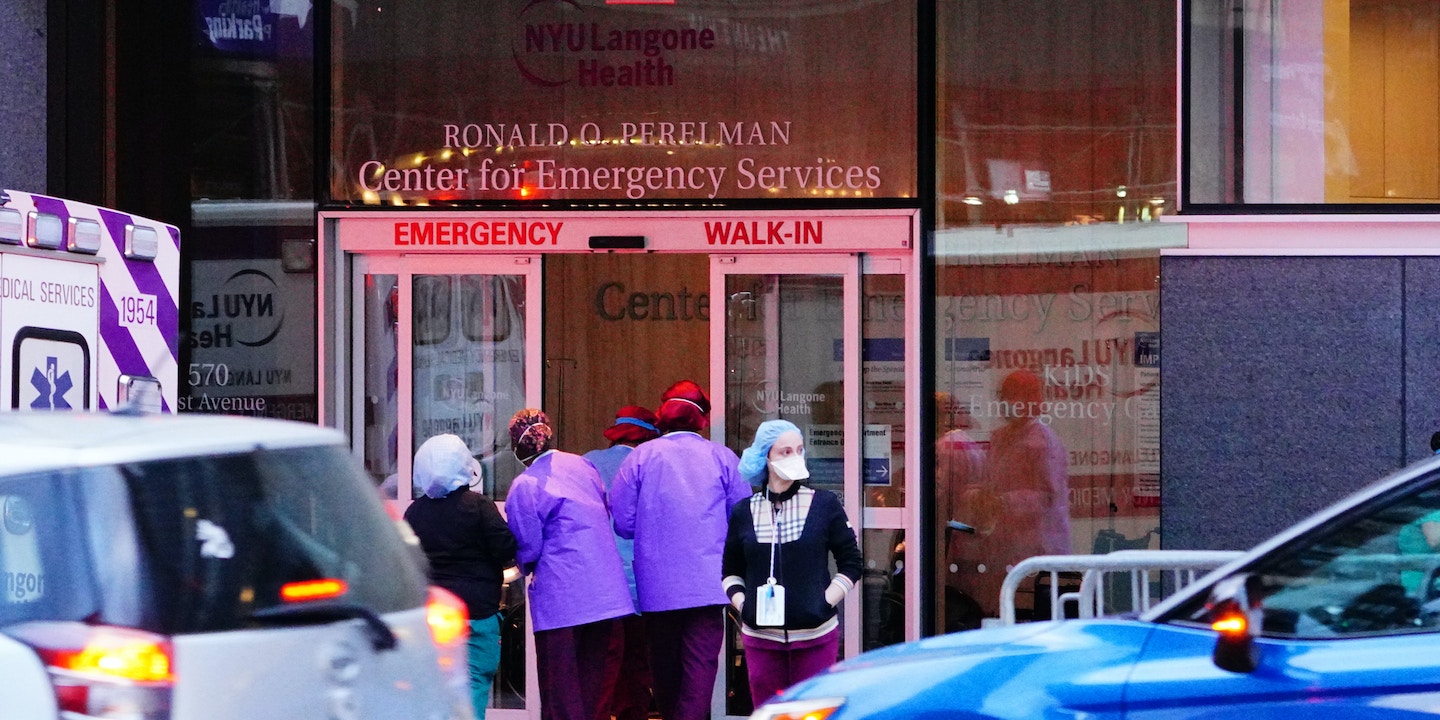 Peter sounded tired when he answered the phone. It was 10 a.m., and he’d just gotten off his overnight shift caring for coronavirus patients at NYU Langone hospital in Manhattan, where he said he’s seen four to five people die each night. He’s used to working in intensive care units, but Peter, whose name has been changed to protect him from retaliation, felt totally unprepared for what he was facing. “My first night, I was just like — please don’t let me make a mistake that causes someone to die,” he said.

Like the thousands of medical residents in New York and across the country, Peter and his fellow residents at NYU are facing months of terrifying work during the coronavirus crisis. As New York’s hospitals scramble for extra labor, many residents — who occupy the lowest rung in the physician pecking order in a hospital — are being redirected from their training programs into an intense war zone.

After his first few days of work with Covid-19 patients, Peter signed a group letter from NYU medical residents asking the hospital for hazard pay — a common demand from health care workers being sent to the front lines of the pandemic. Other hospitals in New York City, the group pointed out in their letter, had raised pay and given additional benefits to their residents.

But as residents were still gathering signatures, they got a revealing answer from the administration, who had already seen a copy of the letter. In an email explaining why they were denying the request, the NYU residency program’s top brass accidentally forwarded private emails between program directors discussing the residents’ demands.

The head of urology called the ask for hazard pay “not becoming of a compassionate and caring physician.” The director of gastroenterology asked to see the names of any gastroenterology fellows who had signed the petition.

“I used my personal phone so a family could video chat with their mom as she was dying,” Peter said. “To be told I lack compassion because I think that that’s worth extra compensation when I’m exposing myself to a virus in order to do that … it’s hard to come back from that.”

Medical residents — the overworked, underpaid apprentices of the medical world —have for years largely accepted the status quo of their intense training. Resident unions have remained a perk, but not a compelling draw, of programs, and organizing for better working conditions a foreign concept.

But as residents are drawn into hospitals to work on the pandemic, some say their advocacy may take on a different form. And they’re facing a question of how to make hospitals listen.

On March 20, soon-to-be medical school graduates around the country marked Match Day, when more than 40,000 applicants all learned what training program they’d been accepted into. The annual process is run by a nonprofit that operates an unforgiving algorithm, which matches students to a single residency program where they will spend the next three to seven years.

Alex Adami, a second-year resident at the University of Washington, likens matching to a bizarre NFL draft with no options for players. “It’s like Tom Brady has to play for the Lions, or some other terrible team,” he says. “It doesn’t matter what the conditions are, whether you like the place, whether something happens while you’re there, you’re almost a 100 percent stuck there. There’s basically no way to go anywhere else without torpedoing in your career.”

New residents know that they’re about to enter one of the toughest periods of their lives. Residency positions are funded largely by various arms of the federal government, which pays hospitals to train the next generation of doctors. In turn, hospitals try to get as much work as possible out of their cohort. Most residents can expect to work up to 80 hours per week, often pulling shifts of up to 28 hours.

The extra work doesn’t come with extra pay — even in expensive cities like New York. The average medical resident in the US earned $61,000 in 2019, while carrying an average medical school debt of $200,000. For some, the pressure combined with lack of sleep can be deadly: At least two NYC residents killed themselves between 2016 and 2018.

“Our medical educational practices are medieval,” one doctor wrote in an opinion piece for Medscape in 2018. “[This training] has rendered a corpus of burned-out physicians who are far from the healers — technically and spiritually — that you’d want caring for your family.”

The intense training comes with an implicit promise: Survive this ordeal, and you get to be a doctor. But the world has shifted dramatically since the practice of residing at hospitals became widely accepted in the 1930s. The lowest-paid resident specialties last year were in internal medicine, family medicine, and emergency medicine — expertise that is in high demand during a pandemic. Salaries for doctors in those areas remain low compared to specialties like cardiology and urology.

“Residency is a temporary thing, and we’re all very very aware of that, and we’re reminded of that on a regular basis,” Peter says. “As soon as you finish, you’re on the exact opposite side of the negotiating table and opposing all the things you were previously for. No one wants to burn those bridges.”

But the novel coronavirus is throwing a wrench into the system.

On a Saturday night in early April, while Peter was working his first shifts at the ICU, Reddit’s subforum for medical residents was alive with hearsay. Two residents at different programs in New York City, posters wrote, had died while working without proper PPE, and another resident had passed away in Michigan. The moderators quickly deleted several posts, but a rebellious sentiment brewed through the next week.

Someone posted a video of a NewYork-Presbyterian executive reprimanding residents for complaining during the crisis — but intercut with footage from a dictator in the movie “V for Vendetta.” A Google Doc where residents could anonymously share stories about hospitals not providing personal protective gear and disciplining staff who spoke out was passed around. Posters shared contact information for the handful of resident unions around the country and repeatedly raised the idea of a walkout or strike.

Residents were spooked by weeks of crushing bad news, grim reports from emergency rooms, and the lack of PPE. The first health care provider died in New York in Mount Sinai Hospital at the end of March. Days after his death, Mount Sinai nurses posted photos of themselves on social media wearing garbage bags after the hospital ran out of gowns.

Hospitals increasingly used military terms — talking about “redeployment” of residents from nonemergency specialties to ICUs — while warning doctors, nurses, and other staff against speaking to the media. As New York’s strong nurses’ unions made showings to push for protections for its members, many residents questioned how they could get similar protections.

The Committee for Interns and Residents, or CIR, which is associated with Service Employees International Union, is the largest model for collective resident action, with 13,000 members in a handful of states across the country. The union says that nonunionized residents from across the country have been reaching out since the pandemic began to ask about their rights and has put together an exhaustive list of concerns and questions on its web site.

But Peter, who is a CIR member, is doubtful about how much organized unions can actually accomplish. “If the nurses’ union presses for something, they actually have leverage,” he says. “That’s not something you really have in a residents’ union. There’s nothing you can really threaten to do. There’s no set of residents that are going to be willing to go on an actual strike.”

Residents’ unions formed separately from CIR are also getting attention. Residents at University of Washington have been working since last summer without a contract as the University of Washington Housestaff Association, where Alex Adami serves as treasurer, bargains for better pay and benefits. The union staged a 15-minute walkout in September that got national attention as one of the only collective physician actions in recent decades. The hospital had offered the residents a disappointing deal before the pandemic struck, and they’d resumed negotiations in early April — over videoconference.

Adami says that there’s been an “uptick” in attention to residents, and says better treatment is crucial in a pandemic, even as hospitals face huge budget shortages.

“If you have a bunch of burnt out, sick residents, you’re going to give worse care,” he says. Benefits like hazard pay place “a value on the time of the residents so that the institution doesn’t just use you without caring. If we are not a cost of some sort to the institution, if there’s no value attached to what we’re doing, then why wouldn’t the institution just use you as much as they can?”

The threat of bad press may be enough action for now. Soon after the email snafu, NYU leadership let residents know that after “additional feedback,” they’d be bumping up planned raises for residents from July 1 to April 1. In a statement, NYU confirmed that “resident and fellows who have provided direct clinical care to Covid patients at a higher level of responsibility than usual will have their compensation advanced to the next PGY level retroactively to April 1, 2020, rather than July 1, 2020. We will also seek to raise funds to help off-set financial stress for those house officers whose partners have lost their jobs. Additionally, we will soon announce how we also plan to address the needs of our staff beyond just our house staff. These individuals, from health care professionals to the maintenance staff, also face similar personal risks, challenges and fears as they too work to support care for the Covid patients.”

It’s a small concession, but it might be enough for now, Peter said. “I think with the level of emotional exhaustion that we all have just from doing all this that this will probably be enough that people don’t have enough fire to really fight back for more,” he said. “I think they did the bare minimum to make us keep quiet and do what we’re supposed to do.”