The president’s first response to every crisis is to insist on complete authority, while at the same time abandoning all responsibility. 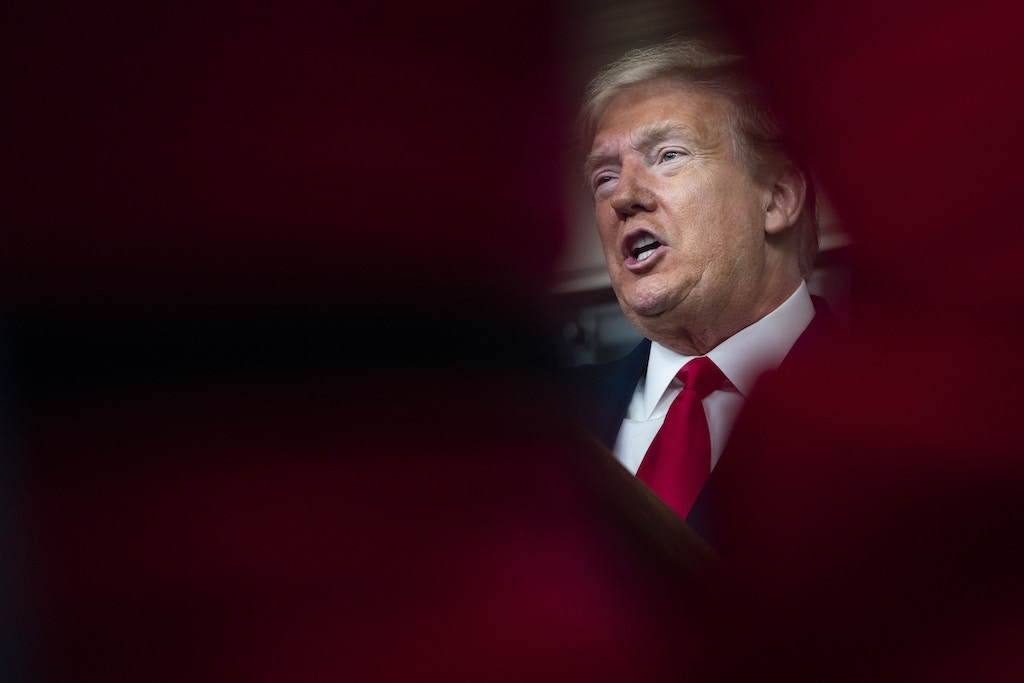 President Donald Trump delivers remarks during a press briefing with members of the White House coronavirus task force on April 18, 2020 in Washington, D.C.

Faced with a highly contagious, lethal disease for which there is no known cure, President Donald Trump has ignored that timeless advice.

Instead, like a medieval demagogue, Trump is spouting quackery and hatred straight out of the 14th century, when panicked Europeans confronting the Black Death strapped live chickens to their bodies, drank potions tinged with mercury and arsenic, and blamed the Mongols and the Jews when none of it worked.

Major catastrophes lay bare the truth about our leaders. Trump’s criminally negligent, chaotic handling of the Covid-19 pandemic has exposed, once and for all, that he is a corrupt, narcissistic psychopath.

His babbling and incoherent press conferences, in which he lashes out in every direction, continue to show that he is in urgent need of psychiatric treatment. He exhibits the self-centered tendencies of a small child.

But a legion of enablers surrounds Trump and prevents any intervention, even in the midst of the worst public health crisis in a century. His family members, like Jared Kushner and Ivanka Trump, appear perfectly happy to keep smiling while enjoying the favored status that, most recently, allowed them to disregard stay-at-home guidelines to decamp to a Trump resort in New Jersey for Passover.

Of course, some of Trump’s most important enablers are the reporters in the White House press corps, who daily act as his Greek chorus. Instead of ignoring his lies and outrageous statements, they dutifully cover his Covid-19 press conferences and tweets as if they were the serious, coherent statements of a genuine national leader. In the process, they are aiding and abetting Trump’s disinformation campaign, which could result in thousands of additional and needless deaths.

The government’s top public health professionals, fearful of losing their jobs and of even worse behavior by Trump, have also become crucial enablers, forced to pretend that Trump’s handling of the Covid-19 crisis has been sound. Dr. Deborah Birx, the White House coronavirus coordinator, has taken on a more prominent role at briefings after effusively praising the president, while Dr. Anthony Fauci, the director of the National Institute of Allergy and Infectious Diseases, has been less noticeable as he has grown more willing to contradict Trump’s most dangerous assertions. On Saturday, Birx went along while Trump hijacked the daily briefing to complain about Democrats, the press, and China.

The result is that the White House is stuck in a surreal alternate reality in which reporters and government officials continue to do their jobs as if the president were not mad as a hatter.

But because of Covid-19, the rest of the nation now recognizes what should have been obvious ever since Trump took office: His first response to every crisis is to insist on complete authority, while at the same time abandoning all responsibility. Despite his inaction and incompetence, he won’t relinquish control over the government’s resources to those who know how to use them.

In the total absence of national leadership or direction, governors have had to take charge, leading Trump to lash out at them. In this, he resembles the insane U.S. Navy captain played by Humphrey Bogart in the 1954 film “The Caine Mutiny,” who is so paralyzed with fear during a storm that junior officers must take control of the ship. After they steer it into calmer waters, he accuses them of mutiny.

Trump has attacked governors in hard-hit states for imposing strict stay-at-home orders to slow the spread of the virus. He is fearful of how the economic impact from Covid-19 could affect his chances for reelection in November and wants the economy to reopen even before the disease has been contained or any treatment is available.

This has led, predictably, to small protests against state-level quarantine measures, staged by an extremist, zombie-like slice of Trump’s base. Trump has endorsed these demonstrations, which have been highlighted by groups funded by wealthy, right-wing industrialists eager for Americans to get back to work even if doing so will kill them.

Once again, the press has done Trump’s work for him by exaggerating the significance of the protests. In fact, Trump has long leveraged support from such fringe anti-government groups to control the media narrative.

These extremist Trump supporters firmly believe that government only helps people of color, and the Covid-19 pandemic, which has disproportionately harmed the African American community, has intensified and accelerated these racist, counterrevolutionary beliefs. These White Walker-like Trump extremists view measures to slow the Covid-19 contagion as government overreach designed to protect people who live in big cities — in other words, in their view, African Americans, liberals, and urban elites — and not them. Trump’s failures in dealing with the crisis only seem to reinforce their view that he is on their side.

Just as a major catastrophe exposes the truth about a leader, it also reveals the truth about societies and nations. Since 2016, the central question facing the United States has been whether it could survive Trump. So far, Covid-19 has shown that the answer is yes. Americans have overwhelmingly supported state-level efforts to curb the virus and have willingly sacrificed their own comfort and livelihoods to help the sick and the medical professionals fighting the disease.

For the most part, state and local officials have acted like adults, ignoring Trump and his threats while forging their own ad-hoc solutions. While some Southern Republican governors are eagerly pursuing a pro-Trump strategy of prematurely reopening their states, not all governors have responded along partisan lines. Maryland’s Republican governor, Larry Hogan, has issued strict stay-at-home orders, as have other Republicans like Ohio’s Mike DeWine and Idaho’s Brad Little.

Hogan has gone further than the others, working closely with the Democratic governor of Virginia and the Democratic mayor of Washington, D.C., to try to come up with a regional strategy to fight the pandemic. He has also started to craft his own foreign policy: On Monday, Hogan announced that Maryland bought 500,000 badly needed Covid-19 testing kits from South Korea.

Hogan and his wife, a Korean immigrant, worked out the deal with the help of South Korea’s ambassador to the United States. Hogan’s unilateral success in countering the severe testing shortage embarrassed Trump, so naturally, Trump attacked Hogan, charging on Monday night that the governor “needed to get a little knowledge,” about testing in Maryland. On Tuesday, Hogan responded, saying on ABC’s “The View” that Trump “seemed to be a little confused yesterday in his press conference. I have no idea what set him off.”

With the Covid-19 crisis, Trump is exhibiting many of the same traits that led to his impeachment just four months ago, after he illegally sought to pressure Ukrainian leaders to intervene in the 2020 presidential election for his personal benefit. Trump abused his power by withholding crucial aid from Ukraine in an attempt to pressure the Ukrainians to spread lies about Democratic presidential candidate Joe Biden.

Now, he is abusing his power again by threatening to withhold badly needed resources and aid from governors if they don’t go along with his reckless demands to abandon their quarantine measures.

It is strange to remember that the United States had a chance to remove Trump from power just weeks before the full force of Covid-19 hit the United States. The Senate impeachment trial ended with Trump’s acquittal on February 5, just a month before the World Health Organization declared the existence of a global pandemic.

The Senate’s failure to convict Trump of impeachable offenses and remove him from office is now coming back to haunt the nation. We are left with a president whose own company tweeted out a video suggesting that getting drunk on vodka is the way to defeat Covid-19.

“I kind of got a cure for this,” professional golfer John Daly said in the video. “I only drink one drink a day — it just happens to be a bottle — of good, old Belvedere. You know, you just drink one of these a day. You know, sippy, sippy on a little McDonald’s Diet Coke. You know, wash it down pretty good. Never have a hangover. And that’s the way you kill this coronavirus, I believe.”