The president has no plans to violate his own stay-at-home order, but he is encouraging his followers to risk their lives by gathering to protest governors. 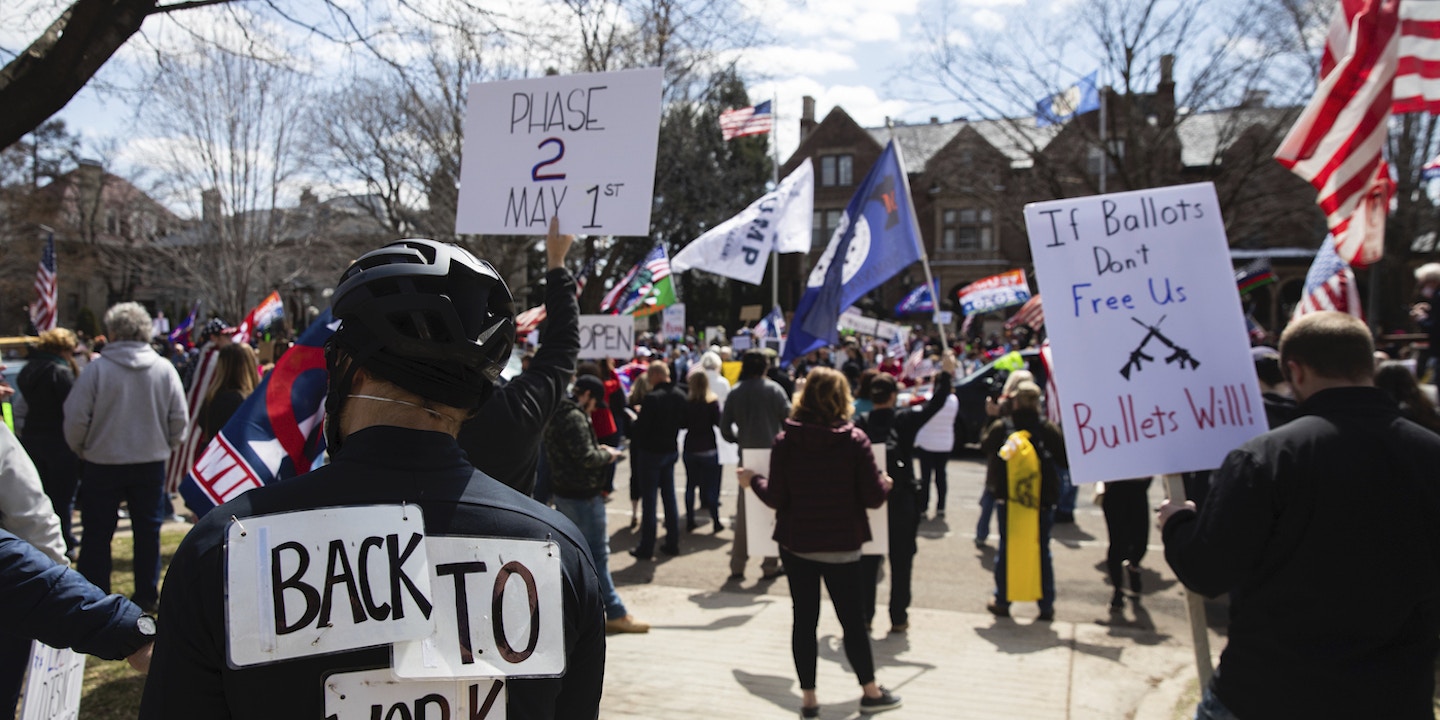 From a very safe distance on Friday, Donald Trump urged his supporters to risk infection with the deadly coronavirus by attending in-person protests to “liberate” Minnesota, Michigan, and Virginia from stay-at-home orders issued by their Democratic governors.

Pandemonium outside the Minnesota Governor’s Residence.

Horns are blaring. A few hundred people are here. Many chant “Open Up!” pic.twitter.com/xMGUtTjYQB

The president, who is pursuing a transparent strategy of encouraging voters to blame the governors of states led by his political rivals for the economic hardship caused by the lockdowns he has endorsed, tweeted his support for the protests he learned about from Fox News.

I couldn't help but wonder as I photographed today's Minnesota protest.

1. How many didn't know they had it when they came here?
2. How many will get it here today?
3. Did I safely avoid it while doing my job?#COVID19 pic.twitter.com/ms9aJEelC1

The protests spread to Texas on Saturday, with a gathering on the steps of the state Capitol in Austin organized by an Infowars host, where anti-vaccine activists brought their children and Trump supporters chanted “Fire Fauci!” in a scene recorded by Manny Fernandez of The New York Times and James Barragán of The Dallas Morning News.

Lots of protest speakers saying Trump should fire Fauci who they say “made up” the coronavirus. They call him Fascist Fauci pic.twitter.com/HzZBrPuSp7

Hundreds of the president’s supporters also crowded together in Brookfield, Wisconsin on Saturday, according to the Milwaukee Journal Sentinel. Those protesters were cheered on by the Wisconsin branch of the Convention of States, a group that aims to amend the U.S. Constitution to make it more favorable to its donors, like the billionaire libertarian Charles Koch.

Lots of Patriots at today's Freedom Rally in Brookfield! pic.twitter.com/RTTHbU2A7o

The Convention of States is currently driving a sham “spontaneous citizen movement,” modeled on the fake grassroots Tea Party movement Koch also funded, to demand that government officials ignore public health and “Open the States.” As my colleague Lee Fang reported, Koch’s Americans For Prosperity is also working against the stay-at-home orders.

The Wisconsin protests were also promoted by Bonnie Lee, a Republican candidate for the state legislature, who encouraged people to attend what she said “kinda feels like Fourth of July on steroids” in a YouTube video she later deleted.

Several of the protesters who took to the streets this week described the lockdowns as deeply inconvenient. One man in a crowd outside the home of Gov. Tim Walz of Minnesota on Friday held a sign reading: “I need a haircut.” Protesters in Michigan attending a rally organized by an adviser to the family of Trump’s education secretary, Betsy DeVos, told Fox News on Wednesday that they were fed up with not being allowed to shop for lawn fertilizer or get their hair dyed.

They want more Americans to die just because they are tired of not being able to buy lawn fertilizer. ?#michiganshutdown pic.twitter.com/ZpzlfHf27B

The few dozen Trump supporters who gathered outside Virginia’s Executive Mansion on Thursday held signs with slogans like, “Stop the madness. It is just a cold virus.” One man in a red Make America Great Again cap told The Washington Post the virus was a “hoax.”

In a move that seemed to give the game away, Trump did not endorse similar protests in Ohio, Idaho and Florida, three states that are run by Republican governors.

Incredible photo of an anti-lockdown protest outside the statehouse in Ohio by @joshuabickel. pic.twitter.com/duVGBJKcFe

Exercising our rights today at the Capital in Boise Idaho! pic.twitter.com/b84fpM0aSQ

Demonstrators are chanting “open up the state” in downtown Orlando @news6wkmg pic.twitter.com/rtMYiMOXKU

Trump’s support for the gatherings, as the national death toll reached 37,000, raised an obvious question. If he thinks it is safe enough for his followers to rally in large numbers as the virus still spreads unchecked, why doesn’t he leave the White House and join them?

The likely answer is that Trump knows the gatherings are not safe but is running a sort of clinical trial of his famous theory that he could stand in the middle of Fifth Avenue and shoot somebody and not lose any support. He never said anything about shooting himself.

Gov. Jay Inslee of Washington, a frequent Trump target, accused the president of incitement. “The president’s statements this morning encourage illegal and dangerous acts. He is putting millions of people in danger of contracting Covid-19. His unhinged rantings and calls for people to ‘liberate’ states could also lead to violence. We’ve seen it before,” Inslee wrote.

“The president is fomenting domestic rebellion and spreading lies even while his own administration says the virus is real and is deadly, and that we have a long way to go before restrictions can be lifted,” he added.

Inslee’s concerns seemed justified by images of heavily armed protesters in the crowd that rallied on the steps of the Michigan state capitol in Lansing on Wednesday to protest Gov. Gretchen Whitmer’s stay-at-home order.

Going to do a thread of some photos from #OperationGridlock pic.twitter.com/Rj1E8pGTgv

At a press briefing in the White House on Friday, Trump continued his daily effort to take credit for any real or imagined success in the federal effort to stop the spread of the virus, and to deflect blame for its many shortcomings onto Democratic governors.

Asked about encouraging his followers to attend protests that could kill them in Minnesota, Michigan, and Virginia — where crowds ranging from dozens to thousands of his supporters have gathered to protest the lockdowns this week — Trump suggested that the restrictions in those states had gone too far, but declined to say how. He also said that people in Virginia should protest an unrelated issue: a new gun-control law signed by Gov. Ralph Northam on Friday, which increases background checks, limits handgun purchases and lets police temporarily seize a gun from a person deemed a danger to themselves or others.

As Inslee pointed out in his statement, Trump’s call for civil disobedience in those three states was particularly odd because it came less than 24 hours after he had unveiled new, science-based metrics for determining when it would be safe for states to considering relaxing restrictions. None of the three states he described as in need of liberation on Friday have met the conditions he spelled out on Thursday.

Updated: Saturday April 18, 11:02 a.m. PDT
This article was updated with video of protesters in Boise, Idaho on Friday and Austin, Texas and Brookfield, Wisconsin on Saturday and an edited headline.