Cuomo canceled six special elections, created some of the nation’s strictest ballot requirements, and expanded his budgetary powers, all in one month. 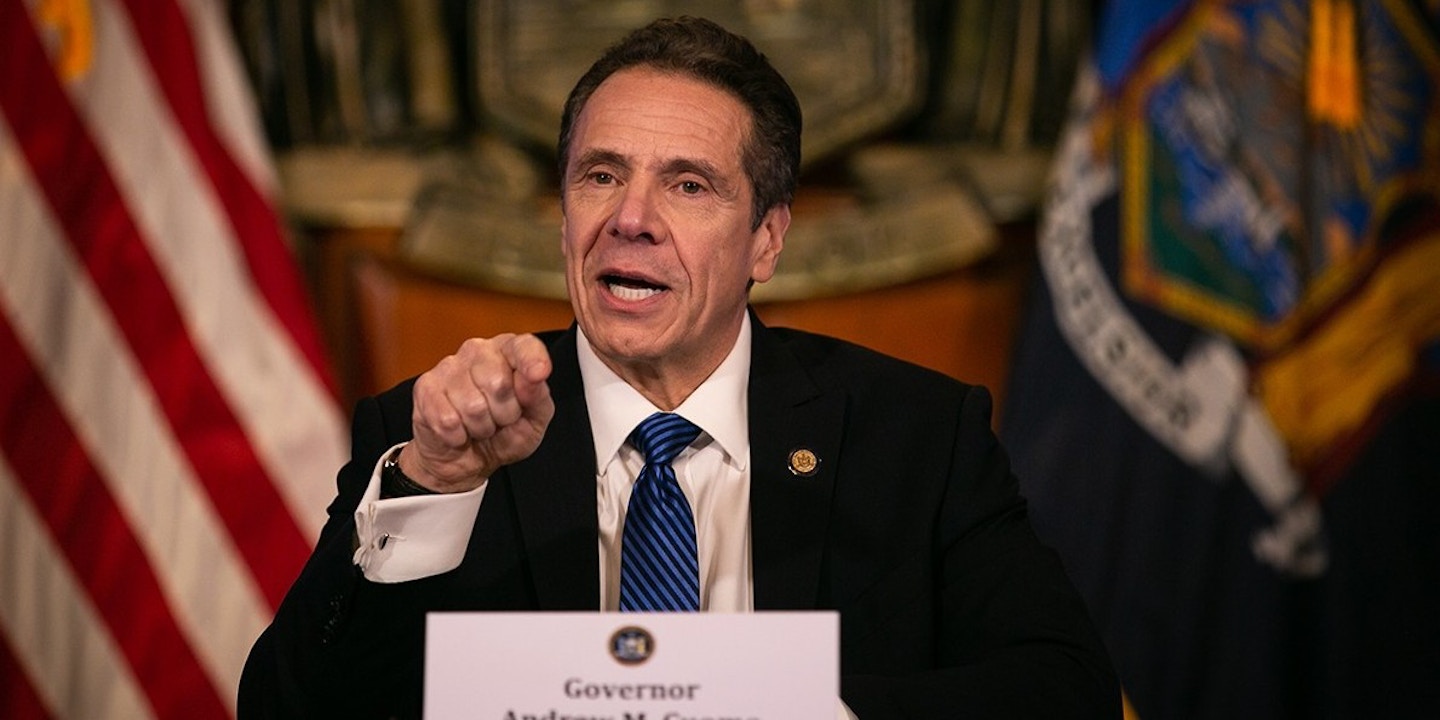 New York election officials’ decision on Monday to cancel the June Democratic presidential primary was just the latest in a series of moves by Gov. Andrew Cuomo’s administration to consolidate power and shut out progressives in the state.

The state based its decision to cancel the presidential primary on public health grounds, since former Vice President Joe Biden is the presumptive nominee after Sen. Bernie Sanders dropped out on April 8. But New York will be moving forward with congressional and state-level primaries on June 23. The cancellation of the presidential primary is likely to depress turnout among Sanders supporters, and lower progressive turnout will likely have a ripple effect for a handful of left-wing insurgents who are mounting credible challenges to longtime incumbents.

In recent weeks, Cuomo has been lavished with national praise for holding nightly briefings about the pandemic, seemingly filling a leadership vacuum left by the federal government. But not only did Cuomo fumble his state’s response, minimizing the risks of the virus in early March, but he has also used this political moment to cement his authority and that of his political allies. Over the past month, Cuomo has canceled six special elections and used the state’s annual budget process, over which he wielded great influence, to enact some of the most strict ballot access laws in the nation and expand his budgetary power. Progressives say the combination of moves amount to a power grab, given cover by the ongoing pandemic.

“He’s high on his new popularity and using it to become even more authoritarian,” said Monica Klein, a progressive strategist in New York City and co-founder of Seneca Strategies.

Sanders’s presidential campaign slammed New York’s decision on Monday, citing the fact that the Vermont senator had asked to remain on the ballot to try to collect more delegates to increase his leverage over the Democratic Party platform. Sanders adviser Jeff Weaver said the move gave precedent for President Donald Trump to postpone the November election.

Progressives in the state are saying the move by the Board of Elections, whose commissioners are appointed by the governor, leaves them disenfranchised. In addition to the cancellation of the primary, they’re pointing to a handful of other changes Cuomo recently made that weaken the left-leaning Working Families Party, with which he has been in a yearslong feud.

“If it’s not safe to hold a presidential primary, then why is it safe to hold a primary for congressional and state offices? It doesn’t make any sense,” said progressive strategist Rebecca Katz. “If they really want to help New Yorkers, they should be canceling rent, not canceling elections.”

Cuomo’s office dismissed the idea that he was using the pandemic to consolidate power and put full responsibility for canceling the primary on election officials. “The presidential primary was a decision made by the Board of Elections and no one else,” senior adviser Rich Azzopardi said in a statement to The Intercept. “We’re fighting a pandemic and have no time for conspiracy theories, especially poorly thought out ones.” The governor’s office did not respond to questions about what role it played in conversations leading up to Monday’s decision.

On Friday, Cuomo signed an executive order canceling five special elections, including four state legislative races and one local election for Queens borough president. He issued another order the next day canceling a sixth special election, for city council. The legislative seats will remain open until November, and the current acting Queens borough president will serve until then as well. The fate of the election for a Brooklyn City Council seat will be decided in court later this week.

“This is your progressive governor that you all think should be president,” city council candidate Sandy Nurse tweeted following the news that her election was canceled. “This is by far the most blatant anti-democratic power grab.”

This means that unless @NYCMayor steps in and enforces the city charter and unless the court agrees, @NYGovCuomo has effectively handed a city council seat to the machine.

The state’s new budget, which Cuomo signed into law on April 3 — after bullying the state legislature to pass it, including by threatening to shut down the Department of Health in the midst of a pandemic — gives him the power to make unilateral rolling budget cuts at any time throughout the year, up from once annually. During budget negotiations, Cuomo had threatened to make cuts to Medicaid and education — some of the Medicaid cuts made it in while he continues to threaten to slash education spending.

Also in the budget, the governor increased the threshold for ballot access, effectively kicking the WFP off the ballot, an issue they’ve battled over for years. WFP is reviewing legal options for pushing back against the increased ballot threshold, according to a consultant who works with the group. In the meantime, it will continue its political organizing in an effort to reach 130,000 votes in November. (Cuomo has also taken some steps to develop safe election processes in light of the pandemic, using executive action to make it easier to vote by mail and shorten the period to gather signatures required to make the ballot.)

Under the new rules, a political party can only get a ballot line if it gets the higher of 130,000 votes or 2 percent of the overall vote every two years on gubernatorial and presidential lines, up from 50,000 votes. Among alternative parties, only the state’s Conservative Party has ever gotten more than 200,000 votes, meaning that in future elections, it could be the only party to appear alongside the two major parties.

Cuomo’s allies have been open about their intentions to stymie progressives by increasing the ballot access threshold. Cuomo ally and Public Campaign Finance Commissioner Jay Jacobs, who chairs the state Democratic Party, admitted last November that the ballot access changes could leave only the Conservative Party to survive among alternative parties, eliminating the candidates in the Working Families, Independent, and Green parties. In a November radio interview, Jacobs argued that any legitimate political party should be able to raise enough money to turn out 150,000 votes, arguing that the thresholds were meant to root out “sham parties,” clarifying that he did not think that applied to the Working Families, Green, or Conservative parties.

“But if you spend a little bit of money — and they all raise a lot of money — the executives of the party and the people in the party get paid a good amount, and I don’t know what they do with the rest of the money, but they sure don’t use it campaigning like the Democratic Party does and the Republican Party does,” he said. “And if you can’t, after you do that, you’re not a credible party.”

Cuomo and the WFP have long feuded over some of the same left-versus-center issues straining the national Democratic Party. In New York, those tensions have manifested in battles over the issues of fusion voting and ballot access for minor parties, along with what progressives say is the governor’s mixed messaging on Democratic priorities.

Last year, Cuomo created the State Public Campaign Financing Commission to determine aspects of the state’s public campaign financing system. The governor’s office said the commission would “have the binding power to implement public campaign financing for legislative and statewide offices, authorizing up to $100 million annually in public funds.” Last year, a state Supreme Court in Niagara County found that the commission, and its approved proposals to change ballot access requirements, were unconstitutional. The court said the setup amounted to “an improper and unconstitutional delegation of legislative authority to the commission.”

WFP New York State Director Bill Lipton has said the commission’s true purpose was to end fusion voting, which allows candidates to run on multiple party lines and exists in only a handful of states. Cuomo has dismissed the idea, noting that he himself has run on multiple lines, though he went on to add the commission’s ballot threshold changes to the state budget this year.

The sweeping changes to elections have progressive politicians fired up. “Trying to suppress democracy at any time is abhorrent,” Nurse and her backers, including New York Rep. Nydia Velázquez and state Sen. Julia Salazar, said in a statement following the cancellation of Nurse’s election. “Trying to sneakily suppress democracy during a pandemic is absolutely outrageous.”